What To Make Of Minsk 2

As was the case with the ceasefire provided for in Minsk 1, the key immediate problem for Minsk 2 is the large Ukrainian force trapped in and around Debaltseve 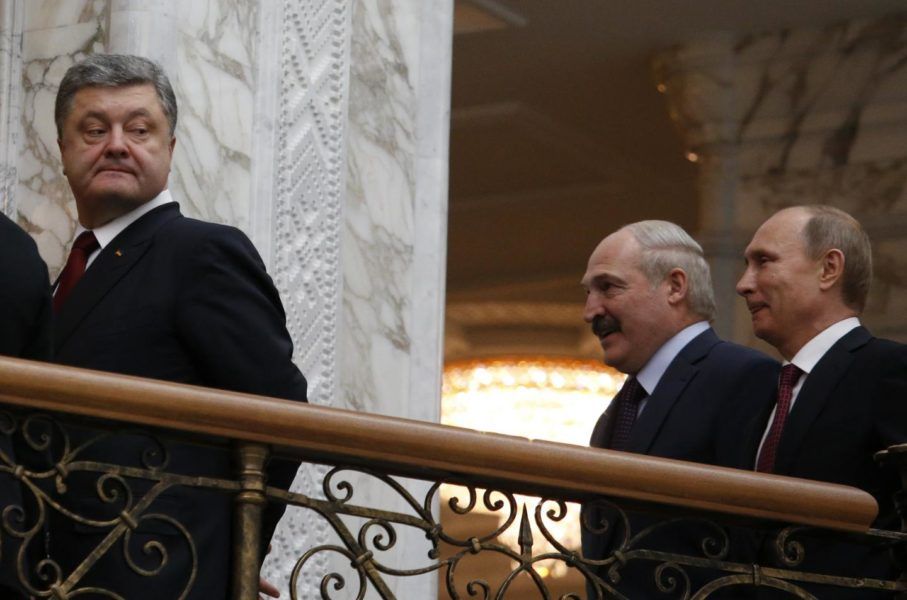 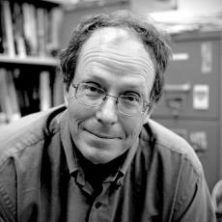 Edward W. Walker will make four general points about the agreement and then focus on its two key provisions: Provision 1 on a ceasefire and Provision 2 on a separation of forces. Poroshenko will be particularly vulnerable politically if the Ukrainian troops in the Debaltseve pocket are decimated or taken prisoner pursuant to Minsk 2. He and the Ukrainian high command made the decision to leave them in place and ordered them to defend their ground, despite the fact that they were clearly at risk of being enveloped. If Minsk 2 is followed by a military disaster in Debaltseve, Poroshenko will pay an even heavier price for having signed the agreement.

I do not believe there is any chance that yesterday’s Minsk agreement will be implemented in full. I am almost, but not quite, as skeptical that it will lead to a stable ceasefire and separation of forces.

In what follows I will make four general points about the agreement and then focus on its two key provisions: Provision 1 on a ceasefire and Provision 2 on a separation of forces.

As was the case with the ceasefire provided for in Minsk 1, the key immediate problem for Minsk 2 is the large Ukrainian force trapped in and around Debaltseve. Those forces are going to have to be allowed to withdraw if the ceasefire is to have any chance of taking effect. It will also be very difficult for Kyiv to order a withdrawal from the territory seized by the Azov battalion this past week to the east and northeast of Mariupol.

In particular, the force separation provisions address heavy weapons only. What is left entirely unclear is what, if anything, is supposed to happen with ground troops, armor, light field artillery, anti-aircraft systems, and so on. Nor does the agreement say anything about combat aviation.

Finally, we do not know if there is even a general agreement on the “line of contact” from which heavy weapons are to be withdrawn. It is very clear that there was no detailed agreement about just what can go where.

These include the provision that implies a measure of sovereignty for Kyiv over elections in the DPR and LPR (Provision 4) and the provision providing for “full control of the state border by Ukraine” (Provision 9). Likewise, Kyiv will not allow the separatists any genuine power in central institutions even if the Ukrainian constitution is amended to decentralize power (Provision 11).

Even less likely is a willingness by Kyiv to grant the DPR and LPR any kind of veto over Ukraine’s external orientation and alliances (which Moscow has been calling for since early last year and probably expects to be part of Ukrainian “decentralization”). Nor is Poroshenko in a position to convince the Rada to resume payments of pensions and other “social transfers” or to restore the banking system even if he wants to, which he clearly doesn’t (Provision 8).

Finally, there is zero chance (a claim I rarely make) that “all foreign armed formations, military equipment, and mercenaries” will be withdrawn from Ukrainian territory.

That will not be difficult for Putin, although it may be for the representatives of the DPR and LDR (in practice their constituents are Moscow, which obviously is not a problem, and the variably-autonomous commanders of their respective armed forces, which may well be a problem if they refuse to abide by the agreement.) It will be rather more difficult for Merkel and Hollande to sell Minsk 2 at home, especially when it becomes clear that many of the agreement’s provisions have no chance of being implemented.

Much the most exposed politically, however, is Poroshenko, who may pay a heavy political price on the home front. That will be particularly true if the agreement forces Ukraine to cede significant territory or contributes to significant battlefield losses in the coming days and weeks (see below).

While Minsk 2 is going to be extremely difficult to implement, it is also true that incentives for allowing a more-or-less stable frozen conflict to emerge in eastern Ukraine are greater than they were in September. That is true for all parties, including Moscow. In part this is for domestic reasons (e.g., the Russian and especially Ukrainian economies are in even worse shape than in September, and war is very costly). In part it is because Merkel and Hollande have to deal with yet another round of the Eurozone crisis after Syriza’s election in Greece, which has highlighted the extent to which the European project is facing its worse crisis ever.

But most importantly, all parties must realize that the risks of an all-out proxy war between the United States (supported by at least some of its allies) and Russia have gone way up now that Washington is considering giving lethal weapons to Kyiv. That a proxy war could turn into a direct conflict between the world’s leading nuclear powers tends to focus the mind.

I turn now to a closer look at Provisions 1 and 2.

The ceasefire is supposed to take effect at noon on Sunday, February 15, not immediately. I am not sure why. One possibility is that Moscow does not want to rein in the separatists until they attain some key military objectives, but that seems unlikely given that those military objectives are not likely to be achieved in just a few days. Another possibility is that Moscow, and possibly Kyiv, think that it will take some time to get their respective forces positioned so that a ceasefire does not leave them exposed, although I am not sure why.

The key point, however, is that there is nothing in Provision 1 about the Ukrainian forces trapped in the Debaltseve pocket. The fighting has been particularly intense there over the past several days (yesterday the Ukrainians reported 19 soldiers KIA and 78 wounded on February 10 alone), and the fighting there looks set to continue at least until Sunday. I don’t think there is any chance that the separatists will manage to take control of all of the Debaltseve pocket by Sunday given the size of the Ukrainian force there (as I mentioned in my last post, I see estimates of between 5,000 and 7,000, but I suspect the actual figure is rather less). But if there are major losses by either side before Sunday, implementing the ceasefire will be all the more difficult.

Of critical importance, then, is what happens to this isolated and now very vulnerable force if and when the ceasefire comes into effect. I have no doubt that this issue was discussed at length during what must have been intense negotiations in Minsk. (Has there ever been an all-nighter like this involving the leaders of four European powers?) Nonetheless, there is no mention of Debaltseve in the Declaration. We therefore don’t know if the intent is to allow those forces to remain in place, or if they are supposed to be afforded an orderly withdrawal, either with or without their weapons, including armor and other heavy weapons. If the issue was simply tabled because the parties were unable to come to terms, Minsk 2 will almost certainly come to nothing.

Poroshenko will be particularly vulnerable politically if the Ukrainian troops in the Debaltseve pocket are decimated or taken prisoner pursuant to Minsk 2. He and the Ukrainian high command made the decision to leave them in place and ordered them to defend their ground, despite the fact that they were clearly at risk of being enveloped. If Minsk 2 is followed by a military disaster in Debaltseve, Poroshenko will pay an even heavier price for having signed the agreement.

What makes the stakes even higher for the Ukrainian president is the fate of the 300 or so Ukrainian soldiers who were trapped in Ilovais’k when the original Minsk Protocol was signed last September. They were being ground down by artillery and MLRS fire before and after that first “ceasefire,” but local commanders from both sides eventually agreed that they would be allowed to withdraw along two corridors. The agreement was violated by the separatists, however, who opened fire and inflicted heavy losses on the Ukrainians as they were retreating. In the end, some 100 of the 300 Ilovais’k defenders were killed in action, while most of the others were either wounded or taken prisoner.

Provision 2: The separation of forces provision

Provision 2 is ultimately the key to the document. At best, it is extremely vague. That does not necessarily mean it is meaningless, but it does mean the devil will be in the details.

The key paragraphs in the provision are as follows:

The Ukrainian government forces shall withdraw these weapons from the actual contact line existing at the moment and the armed formations acting in certain districts in the Donetsk and Luhansk regions of Ukraine from the contact line determined by the Minsk Memorandum of September 19, 2014.

Thus the provision calls for the establishment of a “security zone” by means of a withdrawal of heavy weapons of various capabilities, with larger, more powerful weapons having to fall back farther than others, as shown in the map below. (I include it for illustrative purposes only, not because I think it is particularly accurate.) 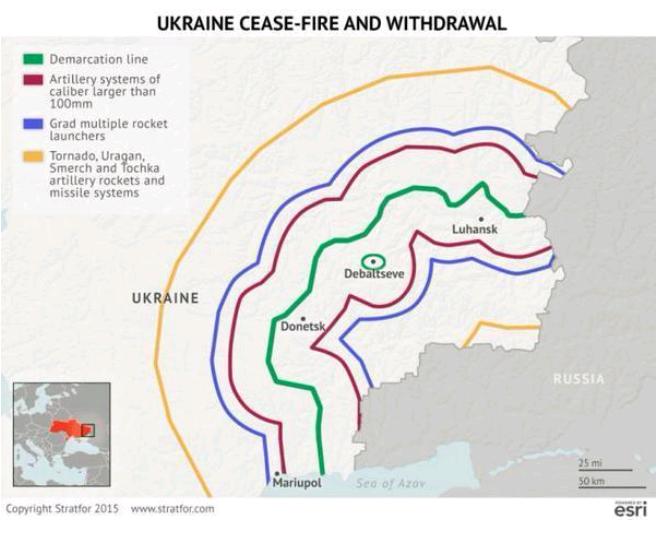 As noted earlier, however, the provision says nothing about ground troops, armor, etc. What happens with them will do a great deal to determine whether a stable ceasefire takes effect. The level of violence will doubtless diminish if Provision 2 is implemented in full, and offensives will become more difficult for both sides, but ground forces will still be eyeball-to-eyeball and intermingled, particularly in populated areas.

Also, consider the size of the area between the red lines in the map, which include the major cities in the region (Donetsk, Luhansk, Horlivka), where all forces other than heavy weapons will apparently remain in place. Note also that the zone of separation is very wide given the relatively small conflict zone. That may be less of a problem for Ukrainian forces, which have room to withdraw to the west and north, but is hard to believe that the separatists will withdraw their heavy weapons up to or even across the border with Russia.

Most importantly, Provision 2 makes reference to two lines, the “actual contact line” today and “the contact line determined by the Minsk Memorandum of September 19, 2014.” Clearly, however, there is no firm agreement on where those lines are. In particular, the “current contact line” is confused and contested, especially but not only around Debaltseve.

The article initially published at Eurasiangeopolitics