Why some crypto assets will survive and others won’t

About 541 million years ago, in the space of just 20 to 25 million years, life on Earth went through a sudden and remarkable change. In what became known as the Cambrian Explosion a few simple organisms were replaced by a huge variety of more complex life forms with compound eyes, multiple legs, and sharp teeth. Most of the Cambrian life forms went extinct, but pretty much all animals and plants living today started their evolutionary journey at that time.

It has been argued that a rise in the level of free oxygen above a certain threshold enabled complex life forms to develop. These complex creatures used their eyes, legs and teeth to prey on other organisms, which had to quickly learn how to hide or grow shields lest they be consumed as food. The rest is history.

We’ve seen a similar explosion in crypto assets over the last 10 years: it started with Bitcoin, evolved to a more complex form with Ethereum, had a separate line with Ripple, and then gave birth to tens of thousands of crypto tokens in the last two years or so.

Like the rising level of oxygen for early life forms, the crypto explosion may have been made possible by Moore’s Law, an observation that over time, ever more computational power is available for the same amount of money. Due to Moore’s Law, sometime in the early 2000s, computing power seems to have reached a critical threshold: it became possible to solve complex calculations on standalone personal computers, and communicate the solutions to other computers over the Internet.

The result was a decentralised, self-sustaining, computational ecosystem governed by a protocol that issued assets to those who let their computers be used for number-crunching. These assets could be thought of as crypto life forms, and pretty soon they began feeding on each other, just as Mummy and Daddy arthropods did way back when.

The key to the survival of a crypto asset is the probability of its adoption for some form of use. To get adopted as quickly as possible, crypto assets have to offer expected return. Expected return, of course, is an economic and statistical construct – it is a sum of payoffs weighted by their perceived probabilities.

And as before, many crypto assets will not survive. By some estimates, around two-thirds of crypto assets offered through an initial coin offering failed to survive 120 days. However, the ones that do will give rise to financial assets more suitable to the digital era than the ones we have now.

The key to the survival of a crypto asset is the probability of its adoption for some form of use. To get adopted as quickly as possible, crypto assets have to offer expected return. Expected return, of course, is an economic and statistical construct – it is a sum of payoffs weighted by their perceived probabilities. Whether those payoffs actually materialise and whether those perceived probabilities match anything deemed rational is a big and, at times, very technical part of the research agenda in financial economics and should not in any way, be viewed as investment advice.

A risk-return taxonomy of crypto assets

By plotting the expected return of crypto assets against the risk of their not being adopted, we’re able to organise them into four large groups: central bank issued digital currencies (CBDCs), stable coins, cryptocurrencies, and (an awful lot of) crypto tokens. 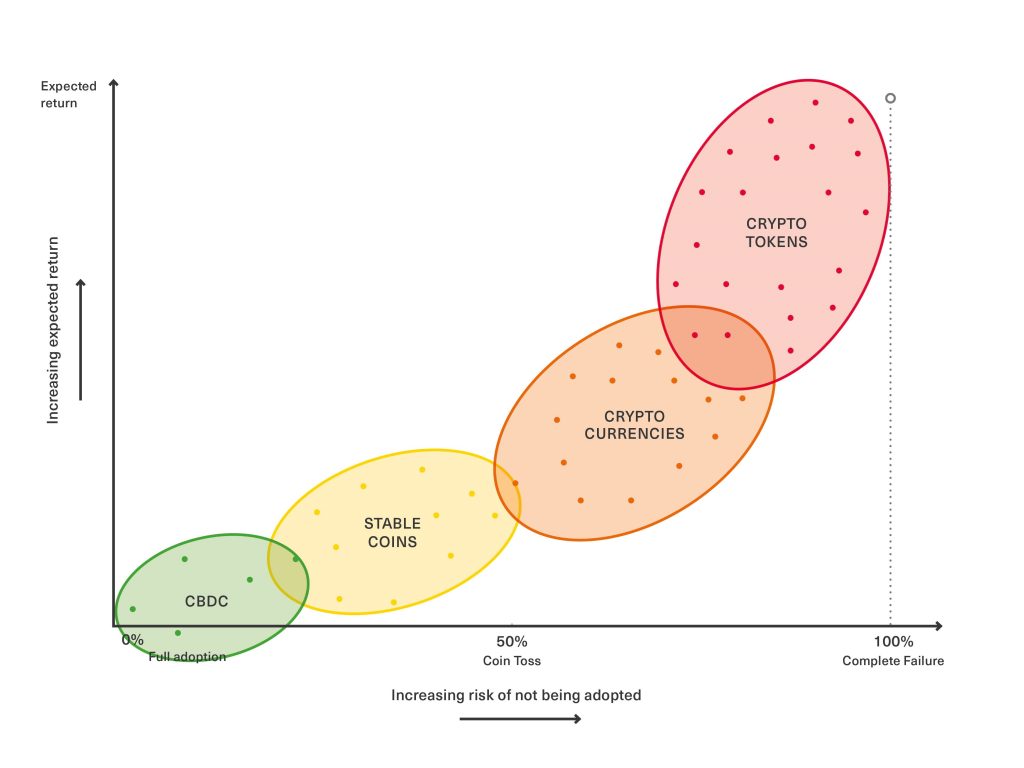 CBDCs can be used to pay for any good, service or financial asset. Their technological advantage is being digitally native. Their economic advantage is access to a central bank-regulated payment system. The probability of non-adoption for such an asset could be kept very low as a central bank can simply mandate its use within its regulated jurisdiction.

So far, there have been several examples of what could be considered CBDCs, but none in credible jurisdictions. In contrast, countries with credible national payment systems have publicly spoken against opening up CBDCs, often citing financial stability concerns.

I’ve been asked by a dozen regulators around the world for my views on crypto assets and CBDCs in particular. In my opinion, a CBDC really makes sense in an economic area where the added value is expected to increase in line with affordable computational power. To put it simply, if you have a global platform like Amazon, Alibaba or Google operating in your economic area, you should seriously study how to give them an ultraliquid, digitally-native asset with access to the payment system that’s suitable for their Moore’s Law driven business processes. Otherwise, don’t worry about it.

Stable coins are so called because they are collateralised by existing financial assets or fiat currencies. Their technological advantage is their ability to be held in crypto wallets alongside existing crypto assets. Their economic advantage is the stability of the underlying collateral. The probability of non-adoption for a stable coin could range from moderate to a coin toss: they need to offer a positive expected return to attract potential users. In so far as a stable coin scales up with Moore’s Law, it could offer a viable transition mechanism from a fiat currency to a crypto asset, provided it is able to reach the necessary adoption threshold.

Stable coins are so called because they are collateralised by existing financial assets or fiat currencies. Their technological advantage is their ability to be held in crypto wallets alongside existing crypto assets. Their economic advantage is the stability of the underlying collateral. The probability of non-adoption for a stable coin could range from moderate to a coin toss: they need to offer a positive expected return to attract potential users.

Investment in crypto tokens is a high-risk activity, vulnerable to outright fraud, failure, and inadequate performance

You don’t need me to tell you much more than you already know about cryptocurrencies. They were designed to scale up with Moore’s law, but their continuing creation to reward the owners of computers that keep track of their use has been proving costly. Their probability of non-adoption fluctuates around 50 per cent and their expected return is high. The adoption of Ethereum is benefitting from its use as a platform for other applications, but the more popular it becomes as a development platform, the higher are the chances that its perceptions of its purpose split, limiting widespread adoption. And, of course, whether or not cryptocurrencies are more fully adopted relies an awful lot on what regulators have to say about them.

A token for everyone?

Last of all are those crypto tokens. These include utility tokens, security tokens, and other types of crypto tokens. For the purposes of this article, tokens are for the most part viewed as future sales, investment and participation schemes designed to fund software development. Investment in crypto tokens is a high-risk activity, vulnerable to outright fraud, failure, and inadequate performance. To mitigate these risks and profit from intermediation and future use, a vibrant ecosystem of crypto funds, crypto exchanges (where crypto tokens are listed) and crypto custodians (where crypto investments are held) has emerged. Some of these participants will go extinct along with their token investments, but others will survive – and make a lot of sense for a number of software projects, especially those that have the potential to become global platforms.

My view is crypto assets have a fundamental technological feature that separates them from previous generations of assets: as affordable computing power increases, so too will their usefulness. This makes them much more suitable for financing activities such as software development, digital payment and settlement platforms, and e-commerce. In contrast, more physical economic activities such as mining, car manufacturing, or running a grocery shop, will do just fine without them.