Why the American Model is Unacceptable for the Ukrainian Railway Reform

American model’s core is the competition of a number of independent railway companies owning both infrastructure and rolling stock. The infrastructure, even strategic one, is owned by those private companies, and not by the state. Why cannot the model along which the American railways have developed and operate to this day be built into the Ukrainian railway industry?

On August 21, 2015, VoxUkraine published an article “How Can Ukraine’s Railways Be Privatized?“ by Jefferson Sinclair. According to the author, the Ukrainian railway industry reform, which this year got off the ground, could benefit from the US model of development. This is not the only controversial statement in Sinclair’s article, on which the Ministry of Infrastructure of Ukraine has a different opinion.

Why cannot the model along which the American railways have developed and operate to this day be built into the Ukrainian railway industry?

Since 2006, when the public debate on the reform of the railway sector began, Ukrainian experts studied the models of railway development in various countries, including the US. The careful study of the international experience revealed that the American model is not suitable for Ukraine. Its core is the competition of a number of independent railway companies owning both infrastructure and rolling stock. The infrastructure, even strategic one, is owned by those private companies, and not by the state. This is what primarily puts the American model beyond the Ukrainian realities.

In order to understand the significant differences between the Ukrainian and American railways, it is enough to compare the railway maps of the two countries. A close look is enough to see that in the United States, rail routes are often parallel.

The map shows the freight rail network in the United States, including routes operated by both the major carriers and smaller railroads. SOURCE: ASSOCIATION OF AMERICAN RAILROADS

This is explained by the fact that historically the railways were built by anyone and anywhere. More precisely, they were built by wealthy businessmen who had the means and the inspiration, or the business needs. Therefore, the development of the railway network in the United States was accompanied by fierce competition, and the construction was not systematical and often spontaneous. At the same time, the companies were free to determine the routes of trains. This resulted in many parallel routes that still operate in the US. Russell Pittman in his paper “Railway Competition: Options for the Russian Federation” (in: Eco. 2001, vol. 8, p. 13–29) wrote with respect to the United States system: “A particular location may be served by one or many railroads, and it is common for a pair of major cities to have two or sometimes three parallel railroads operating between them, competing for customers.”

Ukrainian railways developed along a different scenario. Local railway tracks were built by the state according to development plans, that is, systematically and centrally. 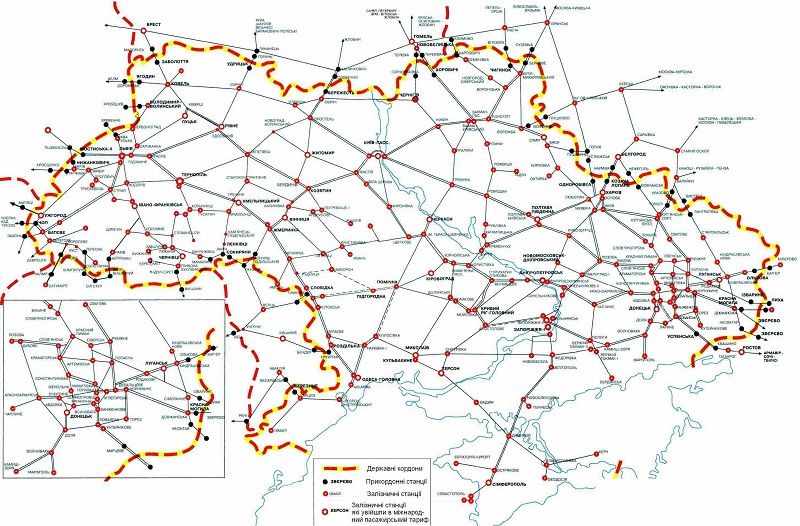 As a result, the country has an extensive network of railways, which eliminates the possibility of splitting them into pieces to create competition between them. For example, the international Baltic – Black Sea transport corridor (Yahodyn – Odesa) actually has no real alternative, moreover: its Kozyatyn – Rozdilne line coincides with the Crete Corridor No. 9 (Hornostayivka – Rozdilne).

If we consider the possibility of separating parts of railways that theoretically could compete, these would be some small parts of lines with no strategic significance or with a totally different capacity. For example, it is possible to get from Yahodyn to Kyiv via Kovel – Zdolbuniv – Shepetivka – Kozyatyn – Fastiv – Kyiv line, which is a part of several international corridors, or via Kovel – Sarny – Korosten – Kyiv, where the route from Kovel to Korosten is a one-track line. Therefore, dividing the railway into smaller parts will not result in increased competition across the industry, since only a few short lines will compete, with others turning into a monopoly.

This is why infrastructure privatization in Ukraine is prohibited by law. Moreover, the corporatization of Ukrzaliznytsya, which is scheduled for completion this fall, rules out any possibility of privatizing or otherwise alienating the railway infrastructure, which will remain publicly owned and will be transferred to the new PJSC on the basis of economic control rights.

As the result of analyzing the best international experience, Ukraine settled upon the most efficient model for the local realities: the German one. Deutsche Bahn holding company (a vertically integrated company) has been established in Germany. Its subsidiary DB Netze (DB Networks) ensures equal infrastructure access (controlled by a regulatory authority Federal Network Agency), and its subsidiary carriers compete with other carriers.

Ukraine today has a horizontal (regional) structure of the industry management, which was effective in the Soviet economy, but does not meet the needs of the market economy. The current model is a combination of railways and other state-owned enterprises that are not united into a single system. This means poor management and very low investment attractiveness. The reform provides for the transition to a vertical organization of the management system. As a result of structural reforms, a holding company will be established on the bases of Ukrainian Railways PJSC, with companies divided along the lines of business (infrastructure operator, freight, passenger, etc.). The infrastructure will remain in public ownership, and the state carrier will have the same rights as private ones.

This equality will be monitored by the newly established State Agency of Railway Transport (SART). Its main advantage will be its independence from Ukrainian Railways PSC and from the Ministry of Infrastructure, and its main task will be to prevent any preferences from being granted to individual carriers. SART will monitor the compliance with the Rules and Procedures to ensure equal access, which will be implemented in the process of reform.

The effectiveness of the vertical model is ensured by the effective competition in the railway services market, which, of course, is an incentive to development. Competition stimulates operators to fight for customers, and in order to win customers it is necessary to ensure an appropriate level of services. These are the laws of the market, and the system in Ukraine will abide by them.

The modernization and development of the infrastructure is planned to be ensured in a number of ways.

Firstly, it’s a new method of tariff setting, when tariffs include an infrastructure component. Simply put, the cost of railway transportation will include the sums that will be earmarked directly for the maintenance and development of the infrastructure.

The infrastructure component will include the investment component. This will partially cover the costs of infrastructure projects consistent with the public policy. The possibility of legislative consolidation of public-private partnerships for infrastructure development is being currently considered.

Implementation of the reform will take many years and lots of effort, but the end justifies the means. As a result, industry employees will get better working conditions and higher wages, and railways customers will have convenient and comfortable trains, andEuropean class customer service. And most importantly, the railway will regain its authority and the trust of Ukrainians, who will gladly use this means of transportation and recommend it to foreigners. This will be the sign that the reform has succeeded.