Half a century ago it was typical when people, having completed their education, worked at one factory/company/public institution their entire life. In today’s world, however, jobs quickly disappear in entire fields or occupations, while the knowledge and skills that will be demanded in the future are difficult to predict.

Any of us may become unemployed. However, young people who rarely have much experience and savings – “a cushion” to survive during hard times – are one of the most vulnerable groups of population heavily affected by unemployment. Diagram 2. Rate of unemployment, overall and among youth in the EU countries 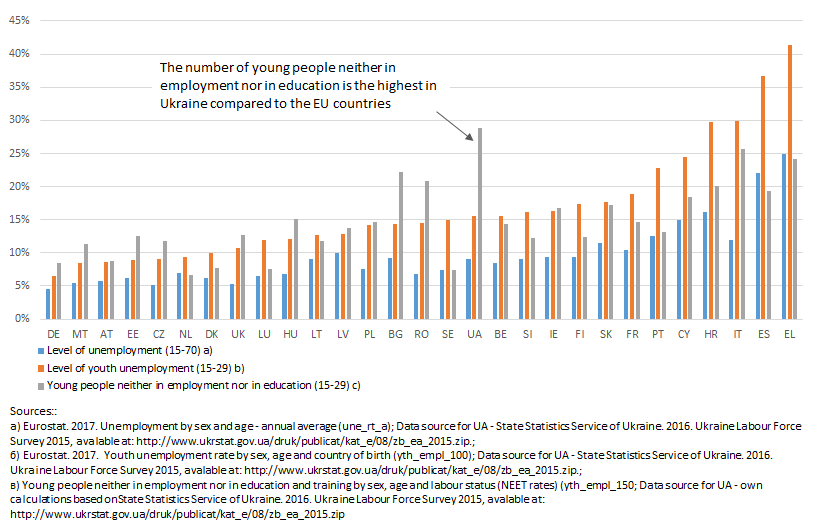 Loss of employment or inability to get a permanent full-time job creates a number of short-term problems – stress, income loss, loss of habitual social status, and, as a consequence, deterioration of mental and physical health and well-being. Thus, Diagram 3 shows that the proportion of unhappy people is higher among the unemployed than among those employed: the ratio is 1.5 in Ukraine  compared to 2 in the EU.

Unemployment is not someone else’s problem; it bears a negative impact on all members of the society. For example, long periods characterized by high level of unemployment have significant negative consequences for the economy and the society in general. It is clear that unemployed people have lower income which they spend on the necessities only, which stifles business development and slows down the country’s economic growth. Moreover, faced with the overall high unemployment rate, even those employed spend less, since they fear losing their job at any time and want to save money for the rainy day. Not so direct, yet no less important consequences are connected with the growth of crime rate, divorce, social orphanhood, suicides, as well as a decrease in public trust or even outbreak of political crises and social upheavals. 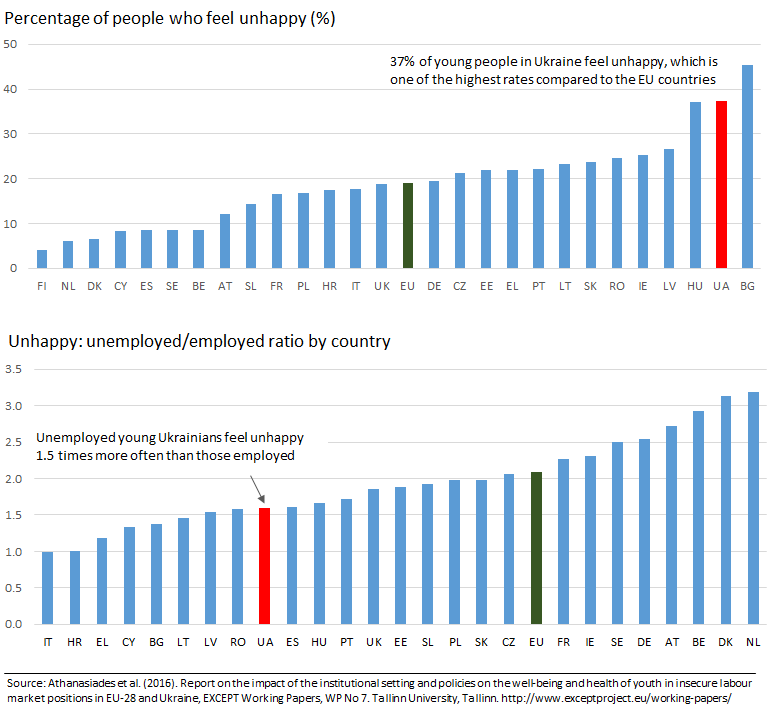 Are there any conditions which mitigate or exacerbate the negative impact of unemployment on individuals? Are these consequences long-term or short-term? Do they disappear in good times or after the problems with unemployment are settled?

The answers to these questions can determine  design of governmental policies or programs which may help not only to prevent unemployment and create conditions for a rapid transition to employment, but also to mitigate its consequences for the people who lost their jobs.

The international project EXCEPT implemented by the consortium uniting ten research institutions from nine European countries, among which Kyiv Economic Institute (at KSE) studies the situation of the youth in the job market and the risks of social exclusion. The project combines quantitative and qualitative methods of research to identify general patterns, understand why young people are vulnerable in the job market, and analyze effectiveness of available policies and individual strategies of overcoming hardships in the job market.

Among other things, EXCEPT focuses on the impact of employment on health and well-being, transition to independence from one’s parents, and the risks of poverty.

The consequences of unemployment receive extensive coverage in the economic and sociological literature. However, little is known about the situation when a person loses his/her job at a young age or becomes unemployed immediately after finishing his/her education, without any work experience whatsoever. Transition from education to employment is an important stage of personal development from the viewpoint of developmental psychology, and for many it is also a step towards financial independence (Winefield et al. 1993). Therefore, unemployment during this period might have considerable long-lasting negative consequences. Young people who are unemployed have a greater risk of unemployment at an older age, as well (Gregg P. 2001). Moreover, it is harder for young people to find a job if they have no work experience or connections acquired throughout their career. And young people typically have less resources to cope with the consequences of unemployment.

The researchers of the EXCEPT project study the impact of unemployment on one’s entire life in order to differentiate short- and long-term consequences. The idea of this research is based on the concept of latent functions of employment (Jahoda 1981): apart from direct income, employment provides status, self-identification, regular activity, and participation in collective purposes. Therefore, unemployment not only reduces income, but also bears a negative impact on health, satisfaction with life, etc. This helps to answer the question of whether unemployment is an ordinary aspect of life which one can overcome easily and quickly or does it really leave its imprint for a long time or even for an entire life?

Unemployment is Bad for Your Health

The results of the research show that in Ukraine and most EU countries the level of health and well-being among the unemployed youth is lower compared to their employed peers. The immediate impact is significant: unemployment reduces the level of happiness and satisfaction with life and bears a negative impact on health. Permanent growth of unemployment and slow macroeconomic development (or recession) exacerbates the negative impact of personal experience of unemployment on health, while the short-term economic downturns have little consequences. Education is an important factor in mitigating the effects of unemployment:  the effect on well-being becomes less negative  in countries with a less stratified education system, higher proportion of people with higher education, and wider opportunities for a “second chance” in obtaining higher education.

Research of the long-term impact of unemployment based on the European data shows that unemployment experienced at a young age continues to bear a negative impact on one’s health and well-being even after 20-35 years. Both short- and long-term effects are greater for men. The model of a man as a family provider is still valid, as proved by the research of both those aged 50+ and younger cohorts. At the same time, husband’s unemployment has a negative impact equivalent to the loss of 2,5 years of life on the health of not only the unemployed man himself, but also on that of his wife. The impact is one-way only: the wife’s unemployment bears no impact on her husband’s health.

The negative impact of unemployment can have a number of channels. One of them is behavioral change which affects health. The study, conducted on the basis of the Ukrainian Longitudinal Monitoring Survey for 2003, 2004 and 2007, has focused on the loss of employment due to economic hardships and mass restructuring of the economy in the 1990s. The effect was measured in 10-15 years after the actual loss of employment. The results indicate that job loss at any age affects the dynamics of health in men – in middle age they are less healthy than those who did not lose their jobs, and they are also more likely to start smoking, which is directly connected with the cardio-vascular diseases – the leading cause of death in Ukraine. Moreover, if a person loses his/her job at a young age (14-35), this leads to a greater consumption of alcohol with age among men, while women become less physically active.

Forty in-depth interviews with the young people who have troubles with unemployment were conducted in 2016 within the EXCEPT project (the data has not been published yet). The results of the survey prove that instability in the job market bears a negative impact on the health of youth.

Financial insecurity encourages young people to take up jobs with poor working conditions, which negatively affects their physical health (fatigue, injuries, exacerbation of chronic diseases). In addition, a lack of (decent) work, precarious employment (informal, part-time or seasonal work), financial insecurity, “moonlighting” on low-skilled positions create psychological preconditions for alcohol abuse. Finally, poverty, which is also linked to unemployment, creates obstacles to health improvement, even for those not prone to bad habits. Unemployment, unstable situation in the labor market, economic insecurity, and low wages are also the reasons why some young families delay having children.

The participants of the survey were more eager to blame “the state”, “the economy” or other persons for their difficulties with employment. They are frustrated and disheartened. Many of them do not know what they want to do with their life, while those who know lack courage, will, and decisiveness to make the first step towards their goal.

So Is Unemployment a Permanent Scar or a Temporary Blemish for a Young Person?

The research results show that youth unemployment is not a minor issue and has real short- and long-term negative consequences. Accordingly, it requires close attention on the part of the authorities responsible for the formation and implementation of youth policy, including the policy of employment. An effective governmental employment policy is one of the key strategies to overcome the negative effects of unemployment and precarious employment among young people in Ukraine.

The EXCEPT team has presented and discussed the results of the research in the higher education establishments of Mykolayiv, Cherkasy and Kyiv. The students who took part in the discussions said that they would like the government to take the following action:

The young people suggested optimizing the work of the employment centers, in particular, through cooperation with private businesses, not only state-owned enterprises, and to launch a system of employment of young people for a fixed period of time after graduating from the university to gain work experience.

However, the students noted that the results largely depend on their own efforts. Another important factor in the overcoming of the negative consequences of youth instability and insecurity in the labor market – apart from public policy – is personal initiative and community support. Young people named the following tools for fighting unemployment and its consequences: greater geographic and job mobility, entrepreneurial initiative, volunteering, and personal development. It is important not to despair and to seek support from friends. Young people would like their families to encourage their independence and to support their personal choice.

Transition from education to employment is an important stage in human formation. Unemployment of young people during this period is not a minor issue; it has long-term consequences for health and well-being and may bring deep scars for life. The unemployed youth should be supported by their families, communities, and government, as it helps to prevent disappointment and waste of the potential of young people who found themselves in difficult circumstances.