The Failures of the Ukrainian Government: a Moratorium on Land

For the past 16 years, seven million Ukrainian citizens haven’t been able to dispose of the land they own. 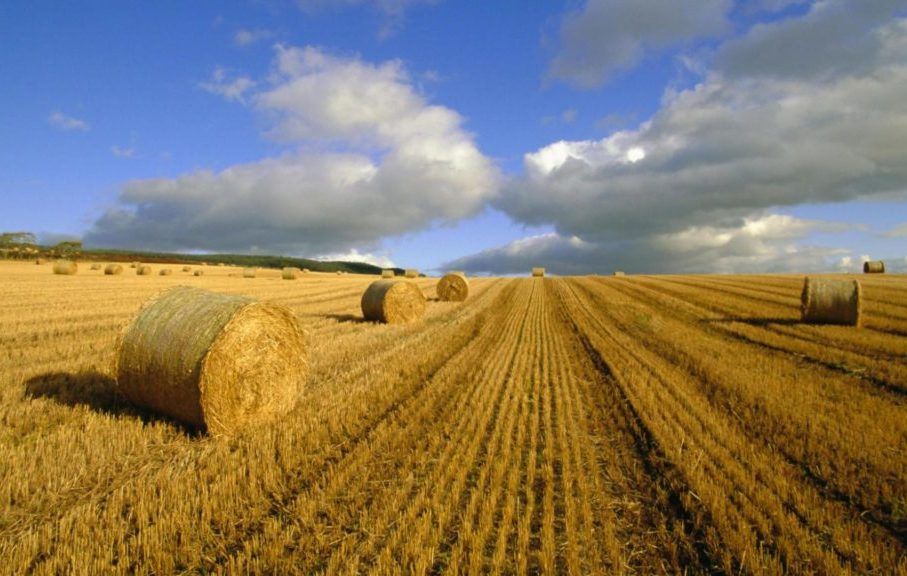 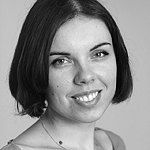 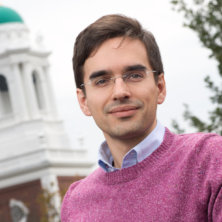 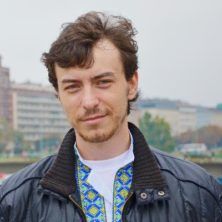 The moratorium on agricultural land sales not only proved harmful to the state economy, resulting in lost revenue of up to USD $40-50 billion, but it was also an egregious violation of the property rights of Ukraine’s own citizens. For the past 16 years, seven million Ukrainian citizens haven’t been able to dispose of the land they own.

The material is a part of the special project “Bad decisions: how to build the poorest country in Europe”

The parliament of Ukraine voted for the introduction of a temporary moratorium on the sale of citizens land shares on January 18, 2001. This move was planned as a temporary solution that would protect the Ukrainian market from a situation in which a few landlords accumulated all the available land. At this point, this ‘temporary solution’ has been in place for almost 16 years. The moratorium is dangerous because it hinders the development of the agricultural sector, the creation of an organized land market, as well as the associated debt and long-term investment in the development of this part of the economy.

The first attempt to control the land market was initiated by the Cabinet of Ministers of Ukraine in 1993 when they  adopted the resolution, “On State Taxes”. This resolution introduced a variable tax rate on the sale of land which depended on the time the land was cultivated by the owner. If the land was sold within one year after privatization, the seller would pay 80% of the contract price; but if the land was sold after 6 years, the sales tax would be reduced to 5%. The reform was never implemented because of strong opposition from the Verkhovna Rada.

The next attempt to run the land market was made by the government in October 1996 when the Cabinet of ministers sent parliament a new draft of the Land Code. At that time, and still today, the launching of the land market was a condition for the continuation of international support programs for Ukraine. However, despite pressure from the World Bank and the IMF, the project was rejected by the Rada in March 1997.

Between 1998-1999, the government and the President found a different way to begin land denationalization. The order of land division and transfer was enacted by the Presidential Decree number 720 of 08.08.1995 “On the order of the division of land transferred into collective ownership of agricultural enterprises and organizations.” Collective and state farmland was divided into shares then transferred into the ownership of “members of collective agro company, agro cooperative, agro joint stock company, including retirees who formerly worked in it” (Art. 2 of the Decree № 720). During this period, the land sale began. This relatively free land market only existed for a very brief period, ending in 2001.

In January 2001, Anatoly Matvienko, an unaffiliated MP at that time and ex-governor of the Vinnytsia region who is currently an MP in President Petro Poroshenko’s party, suggested to his colleagues in the Parliament the introduction of a temporary moratorium on land sale. Right after the Christmas holidays and without discussion, MPs supported his initiative, passing the Law “On the agreements related to the exclusion of a land share (share)” on January 18. Most of those who voted for the law were representatives of the Communist Party (106) and “Revival of regions’ group (later the Party of Regions) (29 votes). “The land was distributed to shareholders, and MP’s were afraid that the rich people will buy it up, which, of course, can not be excluded”,  said an expert on the agricultural sector, Oleg Nivevsky.Kateryna Vashchuk, the chairman of the parliament profile Committee of Agrarian Policy at the time of the voting, explained that the moratorium was “to prohibit the transfer of land shares up to the Land Code of Ukraine.” 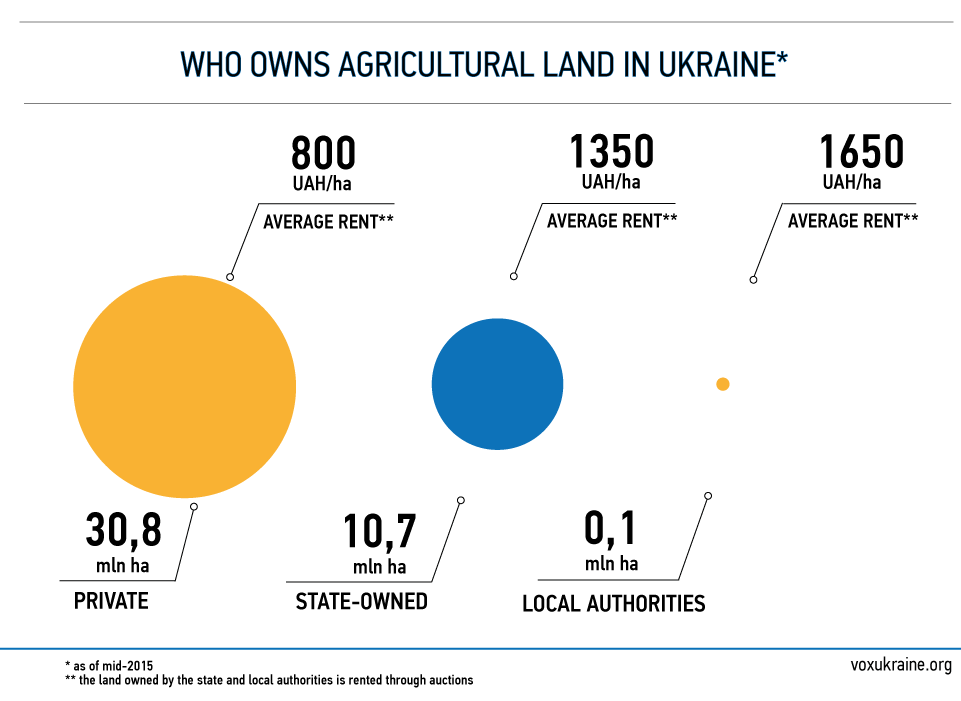 The draft of the Land Code was submitted by the government of Victor Yushchenko in October 2001 and passed by the Parliament.

The document “actually created the premise for the implementation of the third stage of reform – the creation of an effective land market”,

– says the economist Anatoly Galchinskiy in his book “Notes of the President’s Advisor: Ten years with Leonid Kuchma.”

However, there were problems. For example, when considering the draft in Parliament, the Agrarian Policy Committee lead by Vashchuk made changes that not only enabled the moratorium to continue but also made it subject to all agricultural land.

What was supposed to be a temporary solution, actually became a permanent situation for the country.

In October 2004, the moratorium was extended for the first time until January of 2007. Communists, Socialists and also “Our Ukraine” voted for it. Even the leader of “Our Ukraine”, the newly elected president Viktor Yushchenko, upheld the decision to extend the moratorium.

The second time it was extended was in late 2006. The vote for the extension of the moratorium was supported by left wing parties, as well as by the largest parliament parties of the time – the Block of Julia Tymoshenko and the Party of Regions. This time, President Yushchenko vetoed it, but the parliament was overturned the veto. After that, the moratorium was prolonged five more times: in 2008, 2010, 2011, 2012 and 2015. The last vote extended the moratorium until January 1, 2017.

As of today, 96% of agricultural land is off the market, because of the moratorium. The majority of this land, 68%, is owned by shareholders.

Will the moratorium be extended this fall? This is not a very important consideration because according to the Land Code of Ukraine, it doesn’t have to be extended again. This is due to a prerequisite which says that in order to lift the moratorium, a new law on the turnover of agricultural land must first be introduced. This law should create a “procedure for exercising the rights of citizens and legal entities to land (share).”

However, in the 16 years since the introduction of the moratorium, this type of law has never been adopted by the Verkhovna Rada. The closest to adoption was the draft law “On the Market of Land”, submitted by MP Gregory Kaletnik, representative of the Party of Regions. In 2011, the draft law passed the first reading in Parliament, but it never went further.

According to the latest law on the moratorium, the Cabinet of Ministers had until March 1, 2016 to submit a draft law on the turnover of land to the Parliament. However that has not happened yet (although a relevantlaw was prepared back in 2013 by the State Service for Geodesy, Cartography and Cadastre).

So why do MPs and the government persistently ignore the issue of establishing a market in agricultural land? 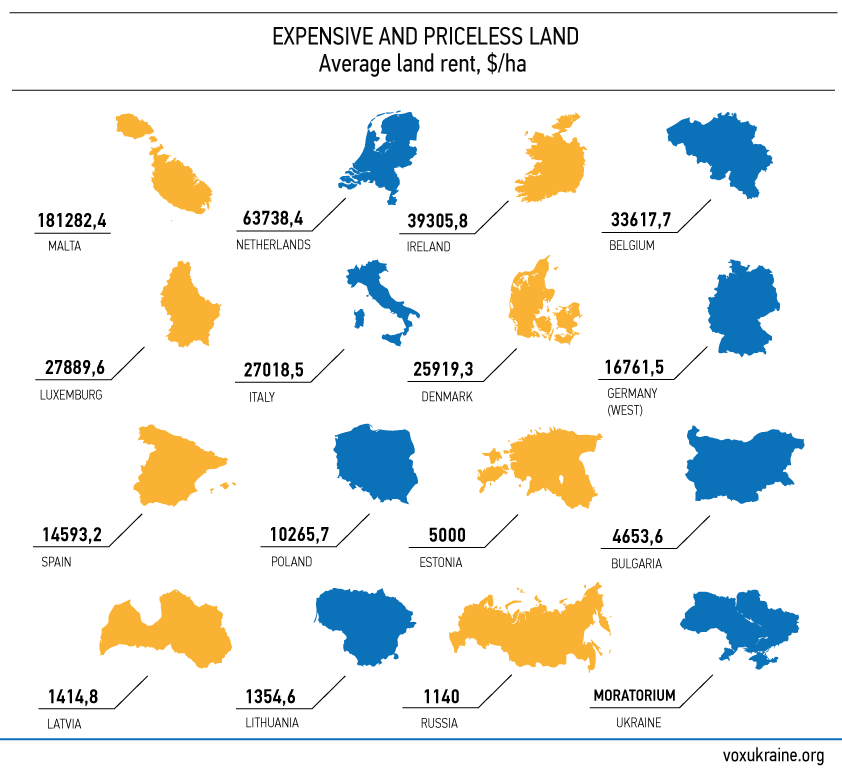 One of the main reasons this hasn’t happened is due to societal distaste for the idea of a land market, believes Andrei Martyn, the vice-president of the Land Union of Ukraine. The authorities, in their rhetoric and actions, simply follow the electoral mood of the majority of citizens. 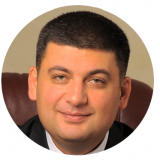 “No decisions on the moratorium may be taken before we understand all the nuances of dealing with land. Otherwise, this will be a terrible situation”

While four presidents and the members of six convocations of Parliament have debated the moratorium for the past 16 years, Ukraine has lost and continues to lose immense opportunities for economic development, the improvement of its own agricultural sector efficiency and the welfare of the rural population.

The cost of the moratorium

First of all, the ban was instituted to prevent wealthy individuals from buying up the land, but that idea was discredited long ago. Now, a simple Google search provides instructions from a bevy of lawyers on how to legally bypass the moratorium in order to buy agricultural land.

Secondly, the owners of the land are forced to lease it out at rates 5-11x lower than its true value

Now, the turnover of land exists mostly on the rights of lease. Oleg Nivevskiy and Denis Nizalov, both experts in the agricultural sector, say that the cost of agricultural land lease in Ukraine is over 10 times lower than it could be if distortions in the land market were eliminated and other production factors such as poor access to capital, moratorium on the sale of land, fragmentation of land ownership were fixed. Additionally, not only those who wish to sell their share would benefit from the opportunity to freely dispose the land, but also those who choose to keep their land.

In particular, the researchers estimated that about 60% of the agricultural land in use is farmed by tenants who lease land from the owners of the shares. The average lease payment amounted to $37 in 2015. At the same time, if the the markets operated normally, the rent would amount to $ 455 per ha, or 11 times higher.

The fourth factor is a significant limitation of access to credit resources for farmers, as Denis Nizalov, Kateryna Ivinska, Sergei Kubakh and Oleg Nivevsky write in their article “Moratorium on land for dummies and not only.”

The creation of a land market will immediately launch the use of land as collateral. “The emerging of land as collateral will untie bank’s hands and will give a new powerful impetus for lending,” – says Zuzak. According to his calculations, even if some land sells at a 50% discount, due to its close location to the conflict zone or the Polissia region, drylands, or other factors, the minimum amount of high-quality collateral will be about $9-10 billion. With the help of lending, the money will be directed into the economy, and the positive impact on the economy will be much higher due to the bank multiples. 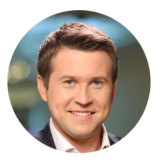 “It is also important to remember that the launch of the land market will enable small and medium-scale farmers to receive loans secured by land and improve the quality of the equipment and technology, thereby increasing the efficiency.” 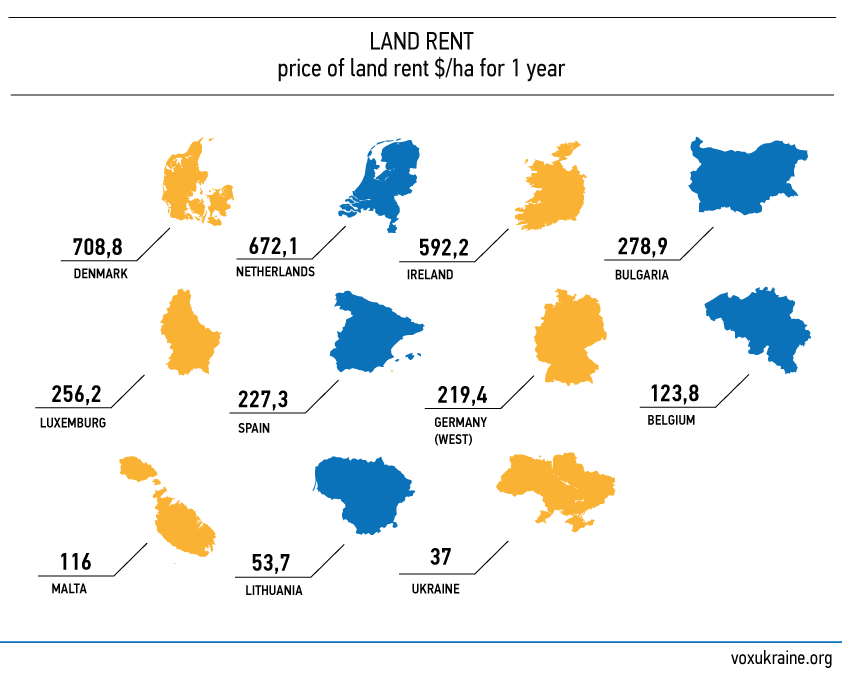 According to estimates by Andrii Martina, as a result of the moratorium and inability to use land as collateral, Ukraine’s economy has already missed out on receiving from $40 to 50 billion dollars.

The fifth negative effect of the moratorium is how it stalls the development of rural areas and farming. The latter prevents the reallocation of land resources from less efficient owners and producers to those who are more effective as well as drives rental prices down and decreases incomes of owners.

Finally, the moratorium raises very important moral and social issues. Landowners are deprived of the possibility to use their land effectively while its rental price is undervalued dramatically and it is not possible to sell it. More importantly, more than a million Ukrainians will never be in a position to sell their land. According to estimates by a project of “The price of the state,” nowadays 1.6 million landowners, or to put it another way, 23% of all owners, are individuals older than 70 years. At the same time, from the time the first moratorium took effect around 1 million landowners passed away. Accordingly, they have never made use of their possessions: they have not assigned successors, or the latter have not exercised their rights thanks to the high costs associated with the succession procedure.