2016 Budget Package: What It Means for Ukraine’s Economy

The 2016 “budget package” approved by Ukraine’s Parliament in the end of December represents a step in the right direction, for it notably lowers the taxation of salaries and redistributes significant resources from the public sector to the private sector 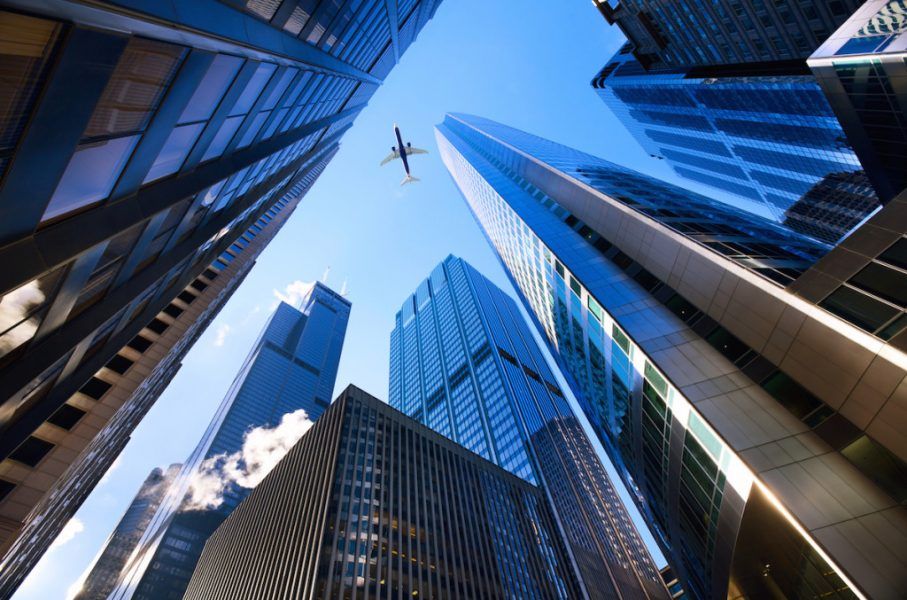 The 2016 “budget package” approved by Ukraine’s Parliament in the end of December represents a step in the right direction, for it notably lowers the taxation of salaries and redistributes significant resources from the public sector to the private sector. However, it should be viewed as just a first step forward with broad reform agenda remaining in the budget-related sectors and beyond.

On December 24, the Verkhovna Rada approved a package of laws critical for disbursement of the third IMF loan tranche of $1.7bn out of $17bn Extended Fund Facility and related official financing of $2.3bn. The so called “budget package” includes the 2016 budget bill with a deficit target of 3.7% of GDP, amendments to the tax code, and several other laws aimed at launching structural reforms in budget-related sectors.

The most important changes to tax legislation include:

In terms of major tax rates, the new levels are close to the government’s initial proposal of equalizing all rates at 20%. However, the new legislation achieved less than what the government aimed at in terms of tax base expansion, in particular, with respect to limiting tax evasion through the use of simplified taxation. Still, approved tax changes and overall packages represent a step in the right direction, particularly with respect to reducing the excessive taxation of salaries, which stimulated widespread under-the-table pay, as well as with concurrently broadening the tax base (though on a smaller scale than necessary).

The Doing Business survey ranks Ukraine among the top-5 countries with the heaviest labor taxation burden on business globally, along with France, Belgium, China and Italy. We estimate the aforementioned employer SSC cut and cancellation of the employee SSC will reduce the tax burden on salaries (tax wedge under OECD terminology) from 43% to 34% [1], making Ukraine more attractive in this respect than the Czech Republic, Slovak Republic or Poland, not to mention the developed EU states.

Figure 1. Tax Burden on Salaries* in OECD Countries and Ukraine (2014)

Note: *the tax burden is calculated as the ratio of tax wedge -the difference between labour costs to the employer and the corresponding net take-home pay of the employee – to total labor costs, the latter including employer social security contribution. Sources: OECD, author estimates

As a result, the overall tax burden on business will ease substantially. Using the Doing Business methodology, the total tax rate paid by an average Ukrainian company would drop by a third (or 18pp) to 34% of commercial profit [2], below the global average of 40.8% and many CEE peers including Poland, Romania, Hungary and others. As a result, Ukraine’s position in Doing Business’ paying taxes sub-ranking may improve by 50 places to 58th.

Figure 2. Tax Burden on Business According to 2016 Doing Business (based on 2014 data; % of commercial profit*)

Note: *the amount of taxes and mandatory contributions payable by a business in the second year of operation, expressed as a share of commercial profits. According to Doing Business, commercial profit is calculated as sales minus cost of goods sold, minus gross salaries, minus administrative expenses, minus other expenses, minus provisions, plus capital gains from property sale, minus interest expense, plus interest income and minus commercial depreciation. Sources: World Bank, author’s estimates for Ukraine

The lower SSC rate will create around UAH 100bn (4.4% of GDP) shortfall in general government revenues [3], assuming no positive effect from legalization of salaries. As other changes to tax legislation approved by Parliament will have only slight positive impact on the budget, on our estimates; most of the revenue shortfall caused by SSC rate reduction is set to be offset by introduced spending-side measures laying the foundation for deeper structural reforms in the inefficient and corruption-prone spheres such as social assistance, healthcare and education. Thus, the new legislation will effectively reallocate some 3.0-4.0% of 2016 expected GDP from the public to the private sector.

Such reallocation will be supportive for Ukraine’s economy, as the public sector usually uses economic resources less efficiently than the private sector, which is especially true for countries with weak institutions. Companies seeing their earnings increase thanks to lower taxation could use these additional resources in several ways. They could increase employee salaries, thereby supporting final consumption. They could de-shadow their business activity by legalizing gray salaries, thus returning at least a portion of the additional resources to the state budget. For loss-making companies (a majority in Ukraine these days), a lower tax burden would help them continue in a tough economic environment without severe cost and/or production cuts. At the same time, profitable companies would be able to reinvest in more efficient production, though some may also decide to stash additional profits abroad.

Despite some potential for salary legalization, this process is likely to be extended in time given the low level of trust in public institutions in Ukraine and no new penalties having been introduced for salaries paid under the table. Thus, the bulk of reallocated resources will likely stay within the private sector, supporting economic activity. It is hard to estimate how exactly these resources will be used by private companies. Given the difficult economic conditions and deteriorating external environment, most local businesses hardly have additional investment in their near-term plans. Thus, in the short term, the reallocation of resources will support economic activity mostly by enabling local business to avoid severe cost cuts (although the capital account may also deteriorate marginally as some companies may prefer to keep more funds abroad), while in the medium-term perspective it should be conducive to higher investment and consumption.

While the 2016 “budget package” carries positive implications for the Ukrainian economy, it should be viewed as only a first step forward. Deep structural reforms in budget-related sectors are needed to improve the efficiency of budget spending. The reform agenda includes, but is not limited to, the introduction of means-tested social assistance, overhaul of the healthcare and education sectors, and reform of the unsustainable pension system. Without these measures, any further reduction in the tax burden can only come only at the cost of a wider fiscal deficit and macroeconomic instability.

There is much more to be done elsewhere. While the SSC rate cut will boost Ukraine’s position in one of Doing Business’s nine components, it will change the business environment only marginally, improving Ukraine’s overall ranking (83rd out of 189 countries in the latest 2016 survey) by a mere 4 spots. The tax burden is a far smaller problem for local and international businesses compared to corruption and weak protection of property rights. Indeed, measuring the distance to the best performer in the 2016 Doing Business survey (so called distance to frontier), Ukraine fares well on the ease of starting a business (94% to frontier), getting credit (75%) and paying taxes (71%) but performs poorly when it comes to resolving insolvency or protecting minority investors. Thus, even with the most liberal tax system in the world Ukraine would hardly manage to attract significant investment without making progress in other critical areas such as contract enforcement, corporate governance, and access to electricity. 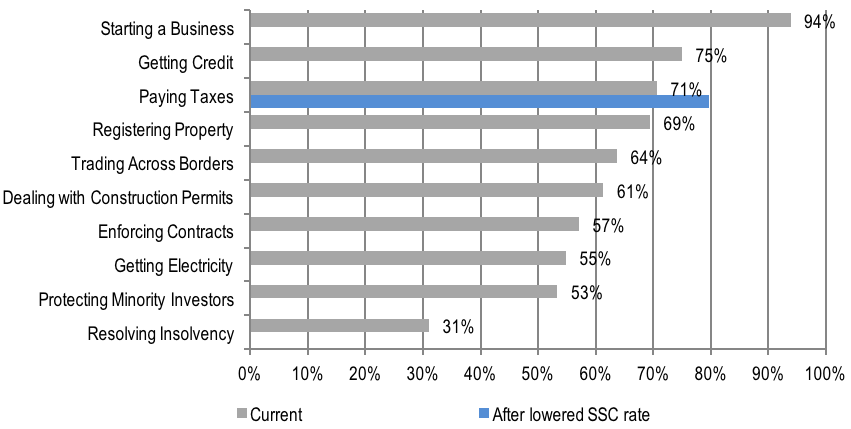 Note: *an economy’s distance to frontier is reflected on a scale from 0% to 100%, where 0% represents the lowest performance and 100% represents the frontier. Source: World Bank, author’s estimate for Paying Taxes component under lower SSC rate