It follows from the comparative politics literature that the choice of political institutions may have lasting effects on the development of Ukraine. Though it seems that no system of government is unambiguously better, a shift to parliamentarianism could make Ukrainian political system more accountable and more efficient as well as less conflictual, less corrupt and less prone to the erosion of democracy.

A recent publication on VoxUkraine went well beyond the ongoing political events in Ukraine by revealing the underlying reasons for the political crisis and calling for a clearer division of responsibility between the president, the government and the parliament. Relative desirability of presidentialism and parliamentarianism has long been a key question in political science. In this article, I briefly review relevant studies and discuss five reasons to believe that a more parliamentarian system, as opposed to presidential or semi-presidential systems with significant presidential powers [1], may be more beneficial for Ukraine. I hope that this essay can contribute to an objective discussion of the issue, given that constitutional changes in Ukraine have often been a way of gaining upper hand over political opponents rather than an attempt to overcome the challenges facing the country.

Political scientists have mostly considered various systems of government in light of their effect on the sustainability of democracy. For a long time [2], the debate centred on the presumed inferiority of presidentialism (and semi-presidentialism [3]) to parliamentarianism. Indeed, the empirical study in Przeworski et al (1996) showed that presidential democracies are relatively short-lived (less than 20 years) in comparison to parliamentarian democracies (71 year). Linz (1990) provides classical arguments against presidentialism: its winner-takes-all, conflict-inducing character; high potential for deadlock between a popularly elected president and a hostile legislature with no in-built mechanisms of creating a pro-presidential majority and overcoming the conflict; its rigidity (fixed duration of presidential terms) etc. A highly probable standoff between the president and the legislature is resolved by extraconstitutional means and thus leads to democracy breakdown (see Figure 1). Mainwaring (1993) confirmed that presidentialism is especially fragile when accompanied by a multi-party fragmented legislature.

Figure 1. From presidentialism to breakdown of democracy 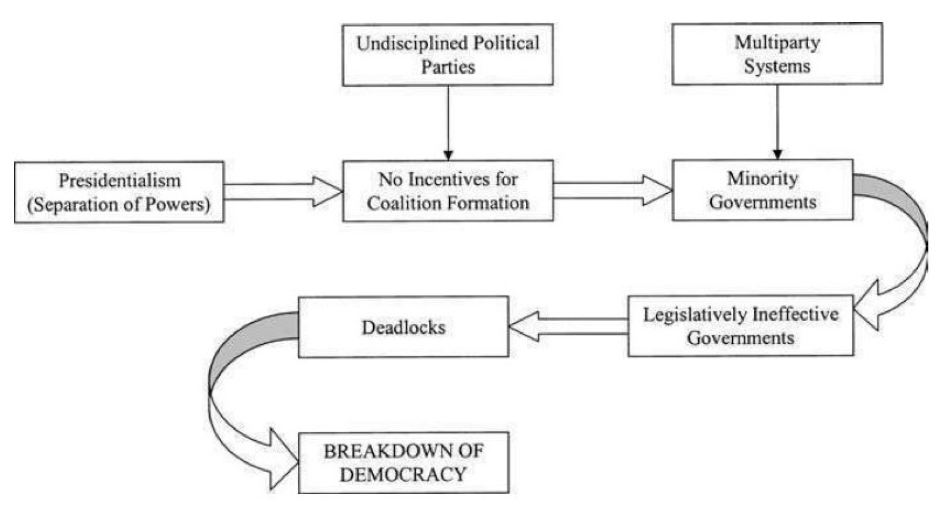 However, further studies have weakened those arguments. Horrowitz (1990) pointed out that other, supposedly better, systems of government often have the same qualities; e. g. the Westminster (British) parliamentary system is no less “winner-takes-all” than presidentialism. Cheibub (2007) found that many cases of democracy breakdown in Latin America, Asia and Africa were caused by the highly active military, and not by presidentialism per se. Cheibub (2007) also established that presidential and semi-presidential systems are only somewhat less likely to create and maintain legislative coalitions than parliamentary regimes. Many regional studies (summarized in Chaisty et al. 2012) confirm that presidents all over the world successfully use a number of tools to this end, such as budgetary authority and patronage. Moreover, political learning seems to happen over time as presidential systems, at least in Latin America, have started functioning more smoothly.

Topic of the week: Constitutional Design

Party Switching: to Ban or not to Ban (Rostyslav Averchuk, BA in Philosophy, Politics, and Economics (University of Oxford))

Therefore, it appears that no system of government is clearly superior when it comes to democratic survival. Instead, more studies look at the ways institutional arrangements influence specific features of political systems, such as accountability or effectiveness. The choice of political institutions should thus be guided by the challenges a country faces. The ongoing debate provides some reasons to believe that a more parliamentarian system could be beneficial to Ukraine, especially in its current situation.

Conflict is not always bad for political systems; e. g. Hale 2011 argues that a premier-presidential system may encourage contestation, and hence democratization, in otherwise authoritarian-prone systems. However, a particularly difficult situation in Ukraine, with both an external threat and the urgent need for deep reforms, calls for quick and decisive actions that require efficient and united government. Moreover, political conflicts may negatively affect not only the image of politicians themselves but also the popular perception of democratic values and policies they proclaim. The sense of disillusionment and yearning for the so-called “iron hand” may facilitate the rise of populist and authoritarian forces.

Figure 2. Effects of a parliamentary system on Ukrainian politics 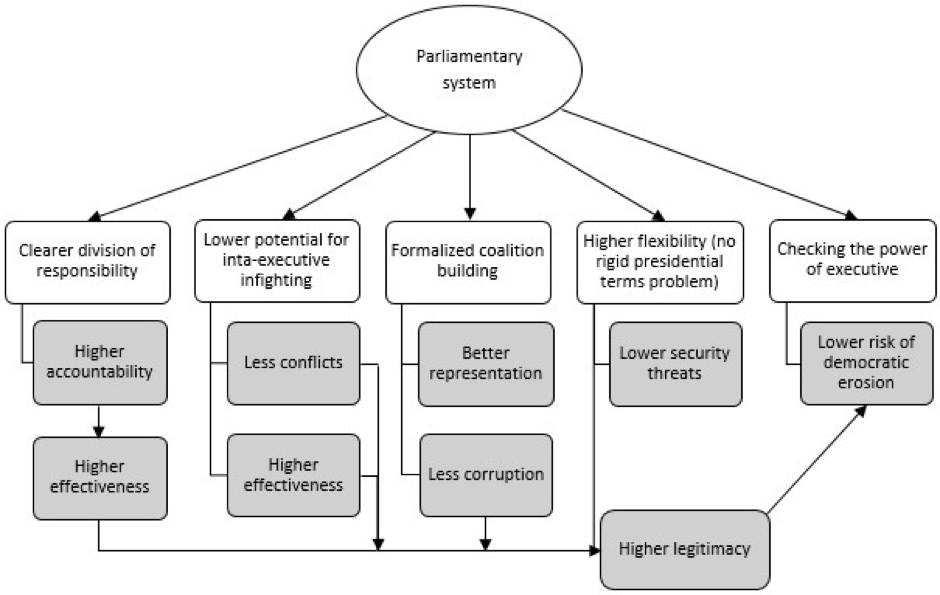 In contrast, in a parliamentarian system, MPs are expected to form coalitions following a prescribed procedure, which should make the system more transparent and less corrupt. Indeed, this study finds that parliamentarianism helps reduce levels of corruption.

We can view the escape of Yanukovych in 2014 as yet another example of presidential removal. However, as the events during and after Euromaidan show, the price of such a temporary solution can be very high: violence and human casualties, weakening of state apparatus, loss of territory etc. The rigidity of presidentialism is thus a problem for Ukraine, more so than for Latin American countries, given its geopolitical position. Any solution of this problem should be institutionalised, and the obvious thing to do is to switch to a more parliamentary system. Parliamentarianism is more flexible because it provides more room for changing the executive in case it becomes unpopular, e. g. by No-confidence votes or by decisions of coalition parties.

Contrary to expectations, presidents are often not able to serve as brokers for conflicting ethnic (or regional business) groups. Instead, the presidency can be captured by one of the competing parties and used to secure full control over the system, as it happened in 2010 after Victor Yanukovych came to power in Ukraine or in Kyrgyzstan after the Tulip Revolution in 2005. Hale (2011) explains that a strong presidency, given a centralized and clientilistic society, in the presence of competing groups, serves as a symbolic sign of one’s group superiority and encourages elite coordination around this office. Its capture by one group leads to a rapid weakening of the losing group, the concentration of power and the erosion of an unconsolidated democracy. A more powerful parliament, on the other hand, checks both the formal and signalling power of the executive, be it president or prime minister. In the end, no matter how powerful the prime minister becomes, she still relies on support in the parliament.

Though it seems that no system of government is unambiguously better, the effects of each system on specific characteristics of political systems can be different. A shift to parliamentarianism could make Ukrainian political system more accountable and more efficient as well as less conflictual, less corrupt and less prone to the erosion of democracy. The higher the quality of the Ukrainian political system becomes, the more likely it is that Ukrainians view it as legitimate and embrace democratic values in the long term, and the less likely it is that populist or authoritarian forces come to power.

It is true that there are many elements of political systems which are not captured by classifying them as presidential, semi-presidential or parliamentary and which can be decisive for the success of any system of government (e. g. see this article). Other factors, such as the quality of political elites, are also important. Nevertheless, as this essay tries to show, it is necessary to recognize the importance of institutions and look beyond the personalities of politicians and the ongoing political struggle.

[2] For a detailed overview of presidentialism vs. parliamentarianism debate, see Elgie (2005)

[4] For an alternative view, see Samuels and Shugart (2003) who claim that the separation of purpose in presidential systems may provide a chance to hold president and parliament accountable for different policies

[5] For more about the link of regime performance to its political legitimacy, see Diamond (1999)