A More Inclusive Democracy for Ukraine

Representative democracy is not the sole possible form of democracy. It can and should be complemented by other elements, such as direct democracy and participatory democracy. These two components are especially relevant for the latest constitutional amendment debate. These should be implemented through a bottom-up deliberation, in which every citizen participates, followed by a referendum.

The proposal of greater decentralization of power, advanced in the article “Ukraine Needs Decentralization to Develop Future Democratic Leaders”, addresses the core policy issue for Ukraine. Reallocation of some decision-making powers to local level would help not only with breeding new leaders, but will also make decisions more relevant and policies more controllable by people. This change would enhance the efficiency of public policy and reduce corruption. Yet, I would suggest going even further by diversifying forms of democracy. Majority of commentators and analysts who talk about constitutional reform and decentralization in Ukraine discuss a representative democracy only. However, this is not the sole possible form of democracy. It can and should be complemented by other elements, such as direct democracy and participatory democracy.

One of the most known examples of a direct democracy is Switzerland. In recent years many new initiatives promoting a more diversified democratic model have emerged. One of the projects that I came across recently is called Economy of Common Good (https://www.ecogood.org/), which has started in Austria and spread to several other European countries. One of the key elements of this model is a more diversified and decentralized mode of political and economic decision making. This framework is highly beneficial and is strongly recommended for Ukraine.

The essence of the proposal is that democratic process should consist of the three pillars: representative democracy should be complemented by direct and participatory democracy (see picture ). 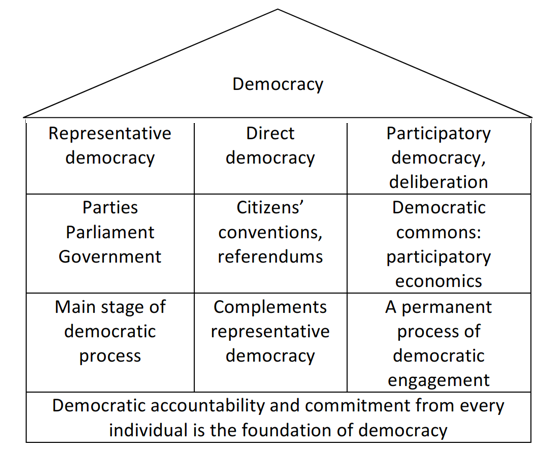 On its own, representative democracy has a tendency to turn into an oligarchy – “a rule by the few”. With elections happening only once in 4 years, citizens have very limited power to influence political decisions. Parties that did not make good on their election promises stay in power until next elections, when potentially citizens can “punish” them by not supporting them. In the meantime, they are free to do whatever it pleases them during these 4 years in command. Moreover, sometimes there are particular issues that have not been a part of their election campaign, and parliamentary deputies are not restrained from voting contrary to the best interests of citizens on those matters. In all these cases there should be certain ways for citizens to correct/overturn the decisions of their representatives. And for this purpose we need stronger mechanisms of direct democracy. This can involve:

The mechanisms of direct democracy need to be developed carefully, as one of its potential drawbacks is instability and susceptibility to manipulation of public opinion. For example, if revocation of a deputy is done with simple majority voting, it may become tempting to use this mechanism for a political revenge. One of ways to diminish instability would be to require a broader consensus on the issue at question, which would raise the threshold for an adoption of a decision and would also put focus on the argumentative base of a decision (as opposed to emotionally/psychologically driven propaganda). For this, the third pillar of the proposed system – deliberation – becomes very helpful.

The third pillar that diversified democratic system envisages is participatory (deliberative) democracy. Deliberation/discourse is central to decision-making in this system and is the source of legitimacy for decisions. If ordinary citizens participate in deliberations personally, then it is a direct deliberative democracy. But, of course, deliberation may be a feature of representative democracy or other types of governance as well.

Normally deliberation aims at consensus, but if consensus is not possible, some sort of majority voting can be applied to arrive at a decision. Deliberative democracy has always been a part of policy decision making, but in modern history it was mainly combined with representative democracy. The novelty of the last few decades is the increased use of deliberation in combination with direct democracy, i.e. personal citizen’s participation in deliberation. The most known examples of such a process are rebuilding of New Orleans after Hurricane Katrina and participatory budgeting in Porto Alegre in Brazil, but there are many others.

The key strengths of participatory democracy are the following features:

Participatory democracy does not need to stay local. Although it is naturally more suitable for the local level, it may be also be implemented at the regional, national and global level, with some modifications. For example, deliberation and decision making can be split at different geographical layers, starting with a local level and ending with a national or even a global one. At the local level, deliberation can happen in person, followed by consensus decision or a majority voting. Then, at the regional level, different localities send their representatives to deliberate in person, plus all citizens, who have access to the Internet can personally contribute online. Deliberation is followed by a direct voting (referendum) by all citizens. Personal voting by everyone is the main innovation here: although deliberation can be partially delegated to representatives, voting is always done personally. In such a manner, we end up with a combination of representative, direct and deliberative democracy. The whole process is assisted by communication technologies that enable citizens to follow the deliberation and contribute to it directly.

In the context of Ukrainian realities, deliberative democracy might look exotic, but actually, it is very much in the spirit of Euromaidan, which showed that Ukrainian people are ready and willing to exercise their citizen rights and responsibilities more actively. Most importantly that it is not only relative and desired but also crucial in the process of constitutional reform. In a context of a discussion focused on referendum to amend the Constitution, the question about Constitutional Assembly is one the most contentious issues. Who should deliberate and prepare the text of the Constitution (or constitutional amendments)? Are these people and organizations proper representatives of the people? How to ensure they pursue common interest instead of their own (or their sponsors)? All these issues are addressed by applying bottom-up deliberation process. All citizens personally should start deliberating at the local level. Local expert commissions should be created to inform the rest of the community about the legal and institutional consequences of diverse options. In parallel, an expert discussion at the national level would also help inform the citizens. Once local communities reach their decisions (through consensus or majority), local representatives then participate at the national debate. So, the Constitutional Assembly will be made up of the citizens themselves. Experts help to inform the discussion, but do not necessarily have to be in the Assembly. Finally, everyone votes in a referendum.

This process, obviously, takes time. But the Constitution cannot be designed in a haste. Moreover, it needs to be supported or at least not resisted by all or almost all citizens. And this is something that is best achieved through bottom-up deliberation. Needless to say, it will provide a tremendous boost to the feeling of responsibility for the community and the country as a whole – something that many social activists complain is lacking among Ukrainian population. No wonder: if I do not decide anything, I lose interest in the issue; but once I have power to influence the common decision, I am in, and not only in making the decision, but also in implementing it.