A Must-Read. Valeriya Hontareva: Introductory Speech at the Opening of VoxUkraine Conference

Valeriya Hontareva is the current Chairman of the National Bank of Ukraine. You can listen to this speech at the JCE Conference Online broadcast, Day 1, 17:00.

Dear Ladies and Gentlemen, I would like to greet all the participants. Special thanks to VoxUkraine, which despite its “professional youth” has gained the trust of general public and businesses, and has become a respected analytical platform. Being the engine of reforms in the country, the National Bank of Ukraine (NBU) supports others’ efforts in implementing reforms.

Meetings like the one we have today are vital for Ukraine. They provide an opportunity to discuss the transmission of reforms that are now taking place in the country “at all fronts”, to identify problems and correct them.

The reform process is complicated, but irreversible – we have already passed the point of no return – 2014 was a milestone for Ukraine and the Ukrainian people. Certainly, it is very difficult to cope with all the problems alone, especially under the conditions of military aggression.

The support of the IMF is extremely important for us today not only in financial terms. The IMF program is also a roadmap of reforms in Ukraine.

As a head of the Ukrainian delegation, I have participated in IMF Spring Meetings in Washington. Christine Lagarde, the Managing Director, mentioned that Ukraine had demonstrated significant progress in implementing economic reforms under the program. This highlights that we are on the right track.

Today foreign investors’ support is absolutely essential for us – since it is not only about investments, but also about modern technology and the best governance practices. We also understand that apart from economic benefits, investors are primarily concerned with the protection of their interests and stability. This is a part of reform in the banking sector.

Indeed, comprehensive reforms are the key prerequisite for Ukraine to cope with all the challenges, to balance economic positions and to restore growth. Today, it is the top priority for both the National Bank and for the Government of Ukraine.

We now focused at:

Let me elaborate on these.

The NBU’s monetary policy during the nearest years will be geared towards a low and stable inflation within a flexible exchange rate that will allow the economy to adjust to its new equilibrium, while fostering steady reserve accumulation.

In 2015 monetary policy will be formulated consistent with inflation objectives, based on a monetary aggregate targeting regime. The NBU will use its NIR (nominal interest rate) and NDA (net domestic assets) as operational targets, and base money as intermediate target, and rely on open market operations to achieve them.

We consider the goal of getting single-digit inflation in a medium run as achievable. Shrinking domestic demand in combination with prudent fiscal policy and elimination of ineffective energy subsidies will lead to wearing out inflation dynamic.

The optimal level of inflation, which should be guided in the conduct of monetary policy in Ukraine, was estimated to be 5% per year (+/- 1 percentage point). We plan to move gradually towards to this level and achieve it in the medium-term period.

Since the beginning of 2015, the NBU operational framework of conducting monetary policy has undergone significant changes:

To stabilize the foreign exchange market and to curb depreciation and inflation expectations the NBU has been active in using its monetary and administrative tools:

The foreign exchange market showed the signs of lowering pressure over the recent weeks. However, the risks of renewed market instability as well as inflationary and depreciation expectations remain high.

In order to avoid the realization of these risks and ensure a firm downward path of inflation, the NBU continues the policy of “expensive hryvnia” by keeping the interest rates high. If the exchange rate market shows further signs of stabilization and inflation expectations become firmly anchored, the NBU will be able to start a gradual easing of monetary conditions both by lowering the key policy rate and by abolishing administrative restrictions.

Also, the ability to ease monetary policy will largely depend on the successful implementation of structural reforms, fiscal consolidation and restoring the soundness of the banking system, which make up the fundamentals for the exchange rate developments.

We do not consider returning to currency peg regime. Ukraine just could not afford it. Today’s approach to manage the float is smoothing out daily fluctuations. The NBU may occasionally enter the market on the buy or sell side to ease the transition from one level to another, rather than resist fundamental market forces.

Capital controls are unpleasant but essential measures for emerging market economy (especially hit by a military conflict). Resolution of major fiscal imbalances and macroeconomic stability are the prerequisites for unfastening capital controls.

After the stabilization of the economy we may need to manage inflows. Capital that runs from abroad needs to meet the proper capacity of financial system and economy to absorb it.

The main points of the NBU’s macroeconomic forecast are the following:

Starting from Q2 2015 we expect a gradual recovery in economic activity (in quarter-to-quarter seasonally adjusted terms), primarily due to the positive contribution of net exports and greater capacity utilization. Some rebound in consumer and investment demand is expected to start from the second half of 2015. However, due to statistical base effect, real GDP is projected to decline by 7.5% year on year in 2015 as a whole. The economic growth is projected to resume in 2016 – by 3.0% year on year. During 2015-2016, the economy will operate below its potential level (by 6%), thus containing inflationary pressures.

Current account deficit will narrow to 1.0-1.5% of GDP in 2015-2016 amid the real effective depreciation of the hryvnia by 19.2% in 2014 and by 2.5% in 2015 on average. The surplus in the financial account in 2015-2016 will be achieved due to the substantial amounts of official external financing and the expected reprofiling of sovereign and quasi-sovereign repayments. Together with the IMF’s financing this should help to restore international reserves to USD 18 billion, covering more than 3 months of future imports.

The major risk to our forecast is the escalation of the military conflict in the Eastern Ukraine, which may cause further capital outflow from the country, deeper hryvnia depreciation and another burst of inflation.

That’s why transparent and understandable communication is essential. We have the clear progress here. We introduced the Monetary Policy Committee and started to publish Inflation Report accompanied by the NBU’s own macroeconomic forecast to enhance the analytical support of monetary decisions, which are made public shortly after the meetings. 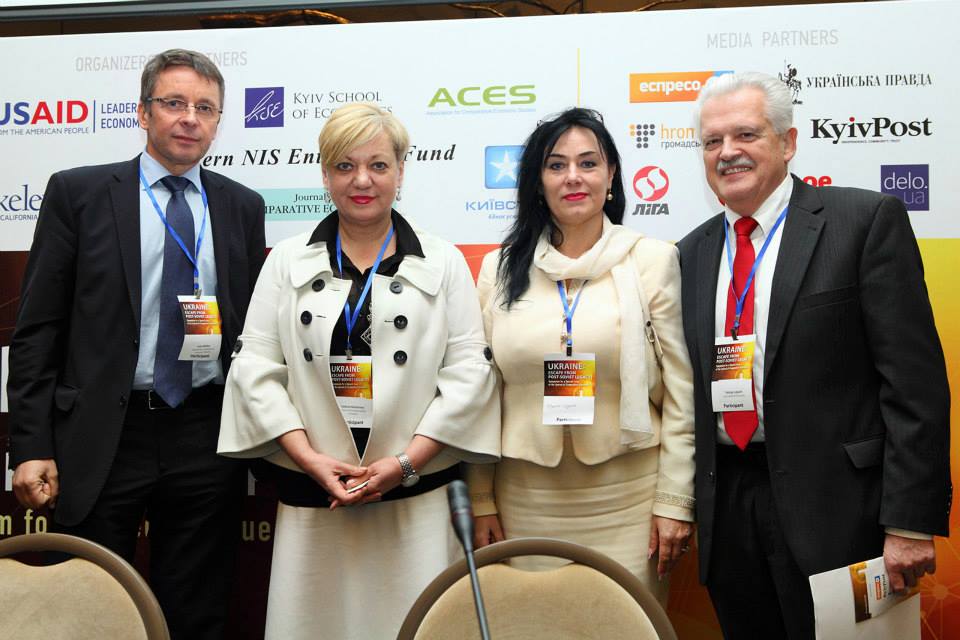 Symposium for the Special Issue of the Journal of Comparative Economics “Ukraine: Escape from Post-Soviet Legacy?” (April 24th, 2015)

One of the core targets of the Program of Banking System Reforming is building-up of a brand new healthy banking system. We resolve inefficient banks and banks violating the law. It is necessary for banking system recovery and consolidation.

Since the early 2014, 49 banks have been withdrawn from the market, 13 of them were declared insolvent since the beginning of 2015. Along with the clean-up of the banking system, the “normal” banks are supported through the adequate volumes of refinancing. This support is extended only to “healthy” solvent banks against high-quality collateral. The NBU’s credits to banks in 2015 cover 1/3 of households’ deposits outflow.

The following measures were taken to stabilize the banking system:

When will the clean-up be over? We have already completed the major part of the exercise. Bankruptcies of smaller banks might follow, but they will not have a significant impact on the system.

The reform of the NBU covers all dimensions:

The regulator can be much more efficient than now. We have changed the NBU management. We engage highly professional experts, who are well known and trusted by the market.

The NBU reduced its maintenance expenditures for next year to UAH 5 billion from UAH 11 billion.

4. Complex Program for Financial Sector Reforms in Ukraine for 2015-2020

Banking system in Ukraine represents 85% of the financial market. So in fact, the National Bank of Ukraine is reforming the whole financial system.

The NBU heads the unit of reforming the financial sector under the National Council of Reforms. The Program activities are agreed and implemented within the framework of Reform Program 2020, presented by the President of Ukraine. The main objective of the Program is to ensure functioning and development of the financial market through creation of competitive environment in accordance with EU standards.

To achieve positive results, it is essential to improve the legal framework: it is important to adopt a number of laws allowing the development of the financial market, and to enforce these laws. The Complex Program for the Financial Sector Reforms 2020 is advanced. On March 4, 2015 the first meeting of the Task Force on financial sector reforms in Ukraine took place. We have held a public discussion with relevant organizations, financial market associations, market participants, experts and civil society. To implement the program and achieve its objective we create project teams that will implement planned activities in accordance with the standards of project management.