After the Russo-Georgian war in 2008, Daniel Treisman said Ukraine would be next in line, with Crimea as a likely flashpoint [1]. In his view, Georgia was a case of Russian imperialism and it is a matter of time when such a thing would happen once again. Britain’s foreign secretary, David Miliband invoked the Soviet crushing of the 1968 Prague Spring and said the war showed that Russia remained “unreconciled to the new map of Europe”. The U.S. presidential candidate John McCain accused the Russians of invading “a small, democratic neighbour to gain more control over the world’s oil supply, intimidate other neighbours, and further their ambitions of reassembling the Russian empire”. However, perhaps, the ambition is to reassemble the Soviet Union rather than the Russian empire and, if so, some Ukrainian citizens may have welcomed the Russian “liberators” hoping that it will restore the USSR.

In any case, why the front line stopped where it stopped is a central question. Yuri Zhukov argues that the underlying force for vulnerability of the eastern regions is their economic position compared to the rest of the country: the “European direction” of the new government could put many industrial workers in the region at risk.

Alternatively, some argue that the divide is determined by drastic differences in views between Crimea/Donbass (pro-Russian) and the rest of Ukraine (pro-Ukrainian). The potential division could be more nuanced. Specifically, it could be pro-Soviet vs. anti-Soviet. Being Russian does not mean pro-Soviet and, likewise, Ukrainian does not mean anti-Soviet. Indeed, the older generation in most post-Soviet countries, including both Russia and Ukraine, find it hard to live in a different system and many of them wish to return to the socialist regime (USSR) without having an understanding of the current system.

In order to assess the vulnerability of the regions, I look at 4 main questions.

To answer these questions, I use the 2007 Ukrainian Longitudinal Monitoring Survey, a uniquely rich data source.

I examined answers to a set of questions in the ULMS survey in regards to the region the respondent was from. The results are presented in comparison to Kyiv on a map of Ukraine for better visualization. The label “less than in Kyiv” means a statistically significant difference from the value achieved for the Kyiv region, “same as in Kyiv” – with such statistically insignificant differences that the results are taken as the same as for the Kyiv region, and, accordingly, the same logic applies to “more than in Kyiv”. Kyiv is taken as a reference point because it is the largest city in Ukraine and is the geographical and cultural centre.

I expected more pro-Soviet people in the Donbass and Crimea, given their vulnerable position. Indeed, results showed that people in those regions are slightly more pro-Soviet than in Kyiv, where the share of people with pro-Soviet views was 32.3%. In Donetsk the share was 49.7% and in Luhansk – 54.3%. In Crimea, the share was 45.1%. Despite the results showing that the conflict regions are more pro-Soviet than Kyiv, we can see from the map that nearly half of the country share these views, however there was no military action in those regions. Therefore, the conclusion is that the conflict oblasts indeed are more pro-Soviet, yet there are other underlying reasons why these oblasts are more vulnerable.

The ULMS survey provided the following options for answering the question regarding the relationship with Russia: same as with other states, closed borders, customs; more friendly with open borders; or in unity.

I expected that the regions vulnerable to Russian aggression have a higher share of people who prefer Ukraine and Russia being one state. Indeed, the map shows that people in Crimea, Donetsk and Luhansk prefer unity more than people in other regions. 11% of the people in Kyiv prefer unity with Russia, 56.9% in Crimea, 43% in Donetsk, and 37.3% in Lugansk. At the same time, many other regions have a higher share of people preferring unity with Russia, including Dnipropetrovska oblast, where the share is 39.2%. However, pro-Russian rallies in Dnipropetrovsk had not been successful.

The first map shows the result for the people who responded that they would not protest in any way to defend their rights.

The next map shows that there is even more unity throughout the country regarding violent ways of defending rights. In Kyiv, the share of population is 1.7%. Only three regions have a statistically significant higher share of the population with these views. Crimea, Donetsk and Luhansk are not among these regions, suggesting that people in these regions are not likely to create militias on their own. 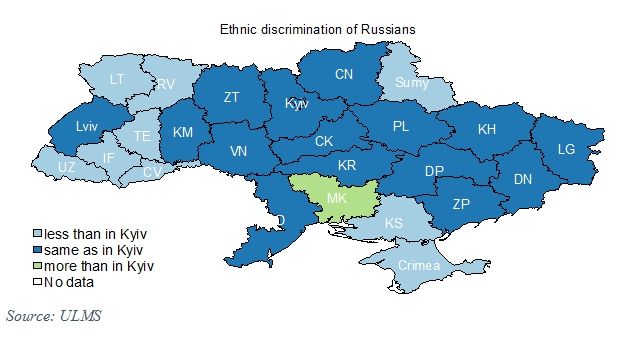 In summary, we can make the following conclusions.

Donetska, Luhanska oblasts and Crimea indeed prefer unity more than Kyiv. However, other oblasts also have a significantly higher share of people preferring unity with Russia. Yet there has not been much of pro-Russian movement in those oblasts. Therefore, the vulnerability of the conflict regions does not directly depend on the preference of unity with Russia.

Data show that less than 1% of the population in the conflict oblasts is ready to protect their rights in violent forms. Thus, without external provocation and support, violence in Crimea, Donetsk and Luhansk could not have sustained.

These findings suggest there is little difference between Ukraine’s citizens across the country, certainly much less than conveyed by Russian media.