Central bank credibility is critically linked to communication and commitment. This column analyses the historical evolution of credibility, showing its prewar peak and the subsequent dip from which it did not fully recover until the 1980s. Inflation targeting has played a key role in establishing credibility in both developed and emerging market economies.

Central banks have been around since the 17th century. Central bank credibility has waxed and waned during this period. In many countries, an important contributor to the achievement of credibility has been the introduction of inflation targeting.

Our research examines the evolution of central bank credibility using historical narratives and empirics for a group of advanced and emerging market economies. It shows that credibility has moved like a pendulum, swinging high under the classical gold standard before 1914, dipping after 1914, and not fully recovering until the 1980s. The advent of inflation targeting contributed to the further enhancement of central bank credibility. The historical depictions consist of six central banks, three of which are advanced economies (US, UK, and Germany) while the remaining countries are considered emerging market economies (Chile, Colombia, and Mexico). The econometric evidence examines data since the creation of the central banks in our sample as well as more recent evidence covering the past two or three decades.

Our approach defines central bank credibility as a commitment to follow well-articulated and transparent rules and policy goals. Essentially, credibility is a function of the difference between observed inflation and the inflation rate that the central bank targets. The latter can be explicit in countries with a numerical inflation target. Elsewhere the target is derived from a model that is sensitive to the choice of policy instrument.

Over the long history of central banking three policy instruments have been dominant:

Figure 1 shows the patterns of expected and observed inflation for ten countries for which we have annual data back to the nineteenth century. The figure reveals a pendulum pattern – credibility was high during the gold standard era, less so in the Bretton woods era, and high again under the current fiat regime with primacy for low inflation.

Note: the ten countries refer to the ones in Bordo and Siklos (2014a). They are the first nine countries listed in Table 1, and Canada. 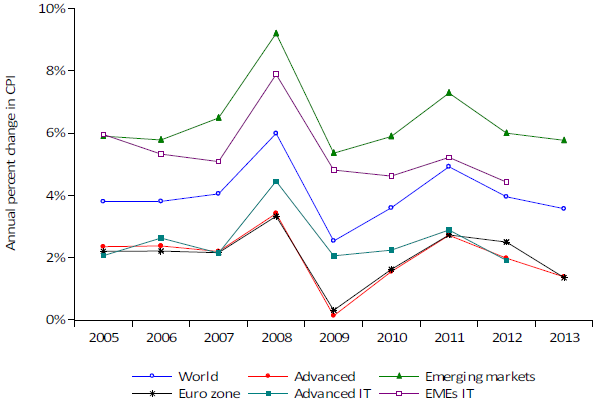 Source: Authors’ calculations based on data from International Financial Statistics, CD-ROM (May 2014). Some data (annual) not available for 2013 at the time of writing.

Figure 3. Transparency: advanced IT vs whole IT sample 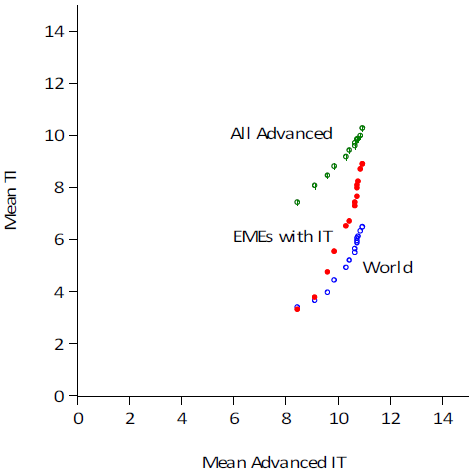 The figure is drawn such that the dots begin when transparency is low in 1998 and – with few exceptions – rises over time until 2013. We see that emerging countries with inflation targeting start in 1998 at the same point as the world, but begin to converge rapidly towards the advanced countries. Not only do the emerging countries adopt inflation targeting very quickly, but they become more transparent.

Next, we consider the credibility of the central banks in our sample based on our earlier definition. Figure 4 reveals that if inflation forecasts are generated with only the most recent data, these indicate that credibility has improved since the bars are generally lower than if we assume that inflation forecasts are generated for a much longer sample. In other words, this figure provides indirect evidence that central banks with inflation targeting appear to have succeeded in anchoring inflation at lower levels. The notable exception to this result is the Eurozone (middle figure) which does not refer to itself as an inflation targeter.

Note: credibility is the squared difference between observed inflation and expected or targeted inflation. See Bordo and Siklos (2014, 2015) for the details.

The financial crisis of 2007-2008 forced central banks to intervene as lenders of last resort and enact other policies to preserve financial stability. These actions involved working closely with the fiscal authorities; some observers have suggested that this turn of events has compromised their independence.  Of course, even policymakers who place a heavy emphasis on the critical role of central bank autonomy also recognize the value of fiscal and monetary policies working in harmony.

The recent financial crisis has also led to the call for central banks to elevate the goal of financial stability to the same level as price stability. In particular some argue that central banks should head off financial imbalances by preemptive monetary policy.  Such policies may be problematic if they impinge on central banks’ main mandate for low and credible inflation.  The profession is still grappling with the nature of any trade-off that might exist between price stability and financial system stability. Part of the difficulty is that whereas the effects of various instruments of monetary policy are well understood, the same is not the case for the variety of so-called macro prudential tools being used.

International Monetary Fund (2013), “The Dog That Didn’t bark: Has Inflation Been Muzzled or Was it Just Sleeping?” World Economic Outlook, Chapter 3, April.