On July 26, 2015, Ukraine had snap parliamentary elections in district 205, which is in Chernigiv. Two main contenders were Sergiy Berezenko from the pro-presidential party Bloc Petra Poroshenko and Gennadiy Korban from the recently formed party UKROP, rumoured to be sponsored and controlled by oligarch Igor Kolomoyskiy. The election was marred by scandals and accusations of fraud.  The Ukrainian democracy is young and fragile, it is critical that elections are conducted in a fair and transparent manner, and that the elected representatives have legitimacy in the eyes of the voters. In this post, we use statistical tools to assess whether there is evidence suggestive of the fraud in elections.

On July 26, 2015, Ukraine had snap parliamentary elections in district 205, which is in Chernigiv. The reason for elections – the president had appointed the representative from the district to lead the regional state administration, vacating the seat. Two main contenders were Sergiy Berezenko from the pro-presidential party Bloc Petra Poroshenko and Gennadiy Korban from the recently formed party UKROP, rumoured to be sponsored and controlled by oligarch Igor Kolomoyskiy.

The election was marred by scandals and accusations of fraud. Media reported that UKROP offered humanitarian support, including food rations to the voters, and that there was a mysterious car full of cash and weapons, possibly related to buying the votes for the pro-presidential candidates. According to the Ministry of Interior, 37 criminal investigations have been opened in connection with these elections, among which 18 concern bribing the voters.

The Ukrainian democracy is young and fragile. It is critical that elections are conducted in a fair and transparent manner, and that the elected representatives have legitimacy in the eyes of the voters. In this post, we use statistical tools to assess whether there is evidence suggestive of the fraud in elections. We do not evaluate whether the campaigning prior to the elections was fair and in accordance with the law (including the incidents mentioned above). Instead, we build on our previous approach and  study the distribution of the reported results. Specifically, we use three tests to analyze statistical patterns in reported voter turnout and voting shares to identify instances where tampering with votes was likely. In contrast to the national parliamentary elections in 2014, we have a small sample size–only 83 polling stations–and thus our results should be interpreted with caution. With this caveat in mind, we find no clear indication of fraud in favor of Mr. Berezenko, the winner of the election race.

Notes: the dependent variable is the share of votes for a candidate show in the second row. Standard errors are in parentheses. *** and ** denote statistical significance at the 1 and 5 percent level.

These strong correlations suggest that we should examine the voting patterns and turnout more closely. The correlations by themselves do not signal fraud: it may be a genuine fact that in areas where voters are more mobilized the voters prefer Berezenko. Figure 1 shows that a few polling stations had a very high turnout and a very high share of votes in favor of Berezenko. However, these polling stations are tiny: most of these stations had fewer than 20 votes. As a result, such high shares of votes may be just a coincidence and these polling stations do not make any impact at the aggregate level. Yet, even if we downweigh these small polling stations, there is a positive correlation between voter turnout and Berezenko’s share of votes. 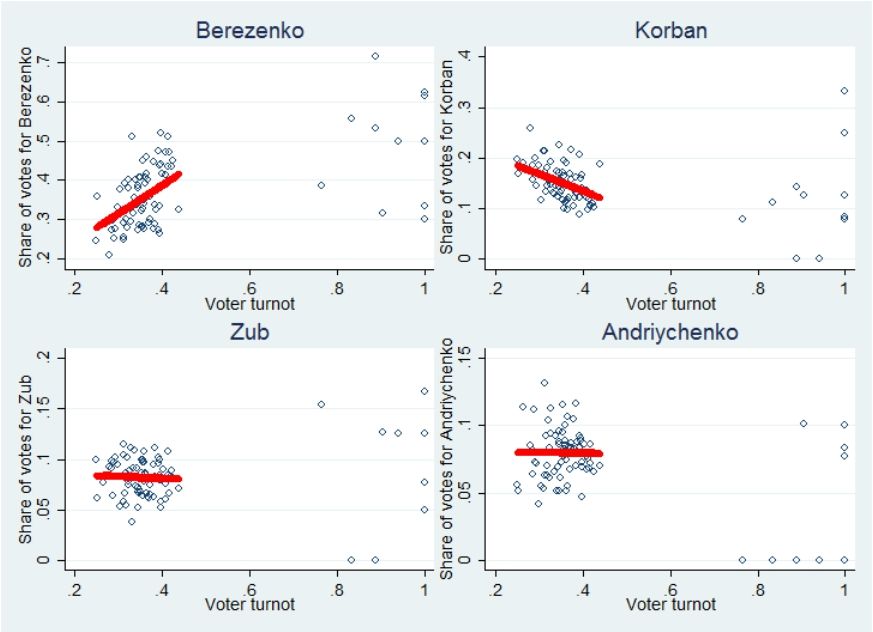 How can one differentiate fraud and genuine preferences? We need “benchmark” elections where fraud was likely. The 2012 parliamentary elections were widely perceived as problematic and hence can be used as a basis for comparison. Figure 2 shows the relationship between voter turnout and the share of votes cast for the Party of Regions in Donetsk oblast, perhaps the most problematic region in the 2012 elections. When we compare these results with Berezenko’s results we note a key difference. Turnout in 2012 was approaching 100 percent, while elections in 2015 barely got turnout of 40  percent at standard-size polling stations. The very high turnout in 2012 is suspicious–voters rarely show up at such high rates–while the turnout in 2015 is close to normal.The normal turnout limits the ability of potential perpetrators to “throw in” many ballots which is consistent with limited fraud.

In summary, while there is a positive correlation for Berezenko, there is no clear smoking gun of fraud in his favor but there are potential grounds to be cautious. 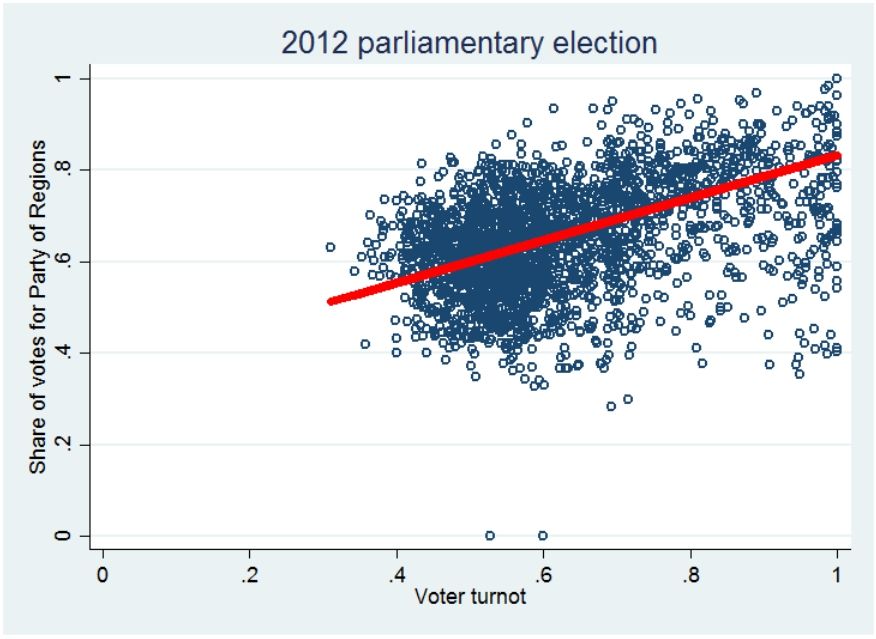 Figure 3. Contribution to the total number of votes by polling stations 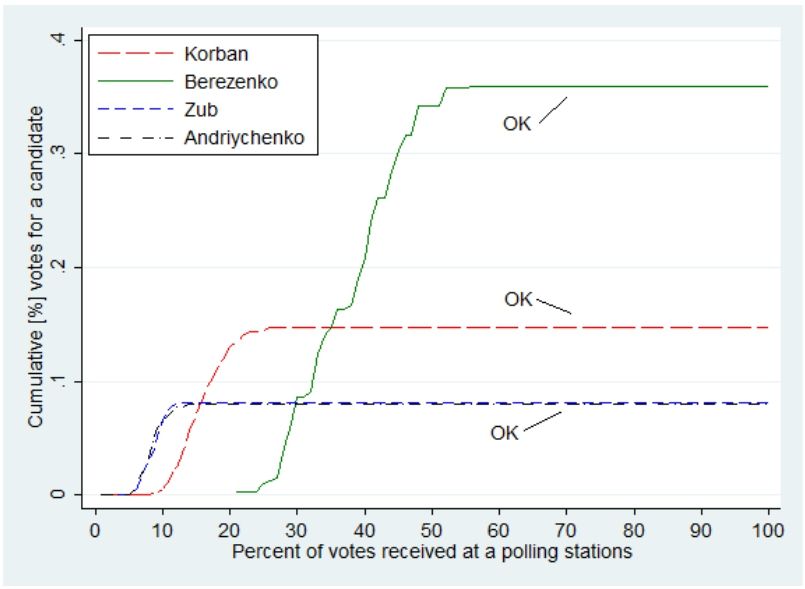 Physicist Frank Benford found that a simple relation could describe the distribution of first digits in real-life data: in about 30% of cases, the first digit in real-life data is “1”; in about 18% of cases the first digit is “2”, and so on. This relationship was called Benford’s law. While there is no particular reason why voting patterns should obey this law, this statistical regularity has been used often to detect fraud: when perpetrators add or subtract votes at a polling station,  they fail to take into account that their actions change the distribution of results at the aggregate level.

Using this approach works best in cases with many polling stations. We have only 83. As a result, we can have some departures from the law simply because combinations of results may be observed by a coincidence. In other words, the power of this test is limited but it is still informative. For example, we can use the distribution of the first digit for the number of registered voters as an additional benchmark.

The distribution for other candidates has some minor “unnatural” departures. For example, candidates Zub and Andriychenko appear to have too many 4’s, 5’s and 6’s as the first digit in the number of voters cast for them, while Mr. Korban seems to have too many 9’s and too few 2’s. However, the sample size is small and these could be just random factors rather than malicious activity.

Figure 4. Distribution of the first digit for the number of cast votes by candidate 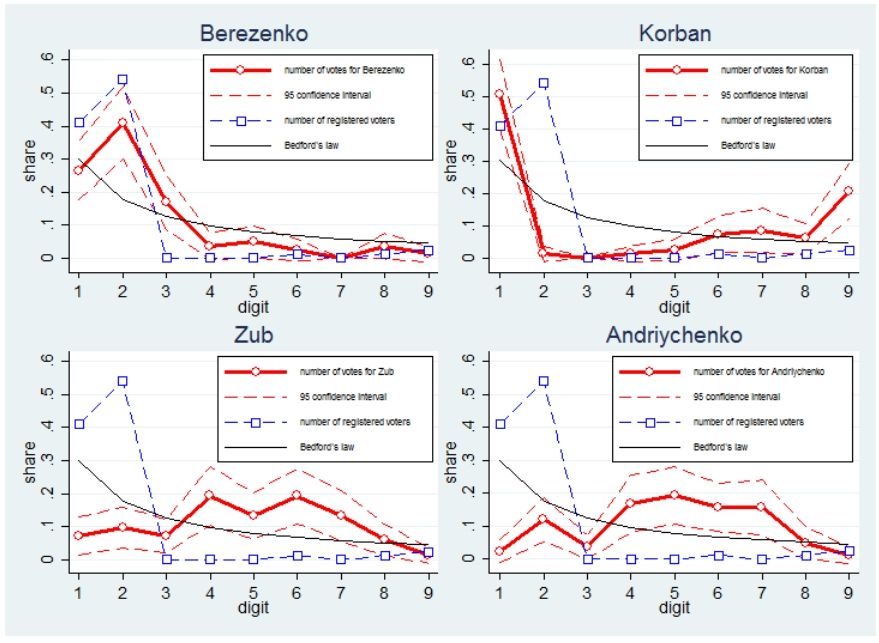 In summary, many observers felt that elections in Chernigiv were seriously impaired. Perhaps.  But, given the combine statistical evidence, we fail to see clear statistical proof of tampering with the vote count. According to our statistical tests, Mr. Berezenko appears to have a clean victory.

Ihor Buinyi (“Democratic Alliance”) disagrees with the conclusions of the post and has written the article Chernigiv Rada Election 2015: The Results Seem to be Manipulated