Effects of Fiscal Shocks in a Globalised World | VoxUkraine

Effects of Fiscal Shocks in a Globalised World

The effect of fiscal policy on aggregate economic activity is of key interest to policymakers and academics alike. However, identifying fiscal shocks in the data is challenging. This column uses daily data to evaluate the effect of government defence spending on forward-looking variables. The results indicate that government spending shocks lead to an appreciation of the domestic currency. This findingsdoes not hold if low-frequency data are used instead.

What are the effects of fiscal policy on aggregate economic activity in a globalised world? This is a key question in current policy and academic debates.

The central challenge in this debate is how to identify fiscal shocks in the data. Previous research (e.g., Blanchard and Perotti 2002, Romer and Romer 2010) has used structural or narrative time series methods to isolate unanticipated, exogenous innovations to government spending or revenue.

While these approaches have many desirable properties, they typically have been applied at quarterly or even annual frequencies. These low frequencies can limit the plausibility of identifying assumptions (e.g., minimum delay restriction for government spending) and reduce statistical power (e.g., narrative shocks can account for only a few historical changes in fiscal variables).

In recent work, we address this challenge by using daily data on US government spending (Auerbach and Gorodnichenko 2015). Using daily variation does limit the scope of our investigation, for we are unable to measure the effects of shocks on slow moving aggregate variables, like real GDP, for which comparable high-frequency data are unavailable. However, high-frequency analysis greatly enhances our ability to assess reactions of forward-looking variables such as exchange rates, asset prices, yields, etc.

In previous research, analyses of how these variables react to government spending or revenue shocks were limited because it was hard to rule out reverse causality using low-frequency data. In contrast, one can be fairly certain that, on a given day, shocks to actual or contracted payments of the US government are not affected by economic news and hence causation is likely to flow from fiscal variables to forward-looking variables.

In our research, we have constructed two daily series for government defence spending. The first series is payments to defence contractors reported in the daily statements of the US Treasury. The second series is the announced volume of contracts awarded daily by the US Department of Defence. Since one series measures actual outlays while the other provides a measure of future government spending, using these two series helps us to underscore the key role of fiscal foresight for timing shocks to government spending as well as responses to these shocks. While it is possible to construct more government spending variables at the daily frequency, we focus on military spending to minimise the possibility of reserve causality and other forms of endogeneity, and because defence procurement is such an important part of the federal budget and a major source of volatility in that budget.

While interpretation of spending shocks at this high frequency may be complex – we discuss that these shocks may include ‘level’ (how much to spend), ‘timing’ (when to spend), and ‘identity’ (who receives government funding) components – we document that certain shocks to government spending have a non-negligible ‘level’ component, which is the component typically studied with data at quarterly or annual frequencies. Specifically, we show that announcements about future military spending move the index of stock prices for firms in the defence industry.

Since 1994, nearly every weekday at 5 pm, the Department of Defence has announced (on http://www.defense.gov/contracts/) its new contract awards greater than $6.5 million. A typical announcement specifies the duration of the contract, the awarded amount, the name of the winner, the location of contract execution, and additional details about the nature of the contract. Each contract is assigned a unique code and is summarised by a paragraph in an announcement. The contracts tend to be of multi-year duration. The Department also makes announcements about modifications to existing contracts. To avoid mixing anticipated and unanticipated awards, we use only announcements of new contracts, that is, contracts that appear for the first time on the Department of Defence’s website.

One drawback of using these data is that the Department does not provide them in a format suitable for statistical analysis. To convert this information into usable form, we have downloaded web pages with announcements from the Department’s archive and parsed data from the web pages. To verify the quality of the information, we use several algorithms of parsing information from the text of announcements, have at least two people check the consistency of collected data, and randomly check the validity of information extracted from a sample of web pages by independent research assistants. Overall, the quality of the data appears to be high.

While the announcements are not immediately translated into actual disbursements, using announcements offers one key potential advantage. Standard theory predicts that unconstrained, forward-looking agents should react at the time of the news rather than when actual spending occurs. The announcements can thus provide a better timing for spending shocks, as measured by the present value of contract awards.

Our series of daily totals of announced contracts shows huge variation (Panel A, Figure 1). The awarded amounts vary from $3 million to almost $25 billion with a standard deviation of $1.2 billion and a mean of $450 million. Consistent with the view that these announcements do not simply reflect high-frequency timing, daily contract awards do not appear much smoother when aggregated to monthly frequency (Panel B, Figure 1). The time series of monthly totals of awarded contracts is characterised by low serial correlation and spikes without any discernible seasonal pattern. Furthermore, these spikes in monthly totals can be related to major military developments. For example, we observe a surge in awarded contracts immediately after the 9/11 terrorist attack, the start of the second Iraq war in 2003, the Russo-Georgian war in 2008, and the start of Operation New Dawn. In contrast, we observe no significant movements in actual payments on defence contracts, the other series used in our analysis.

Figure 1. New contracts awarded by the Department of Defence (in millions of dollars) 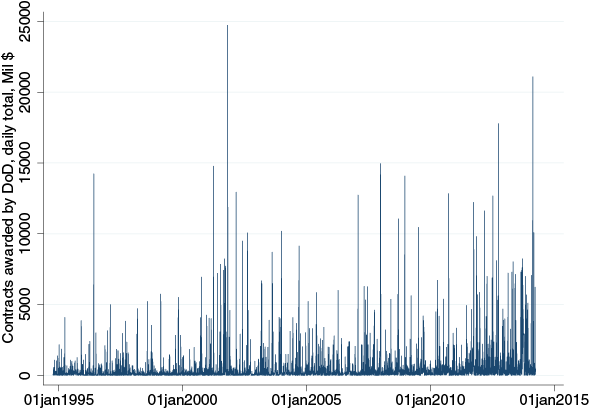 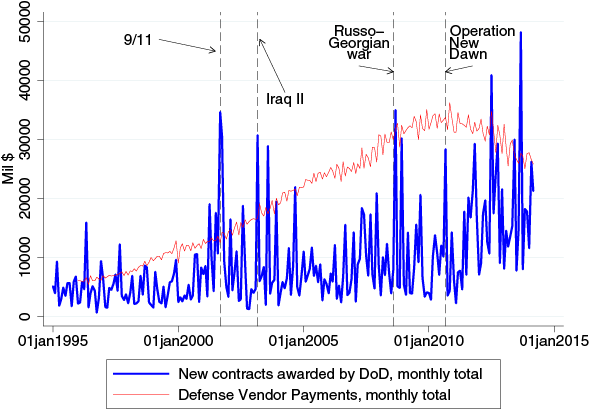 We follow our earlier work (Auerbach and Gorodnichenko 2012, 2013) and estimate the effect of government spending using direct projections as in Jorda (2005). Specifically, we construct impulse responses by running a series of regressions (see the paper for details). As in our earlier work, we extend the direct-projections approach to allow the responses to vary by the state of the economy, for example, where regimes correspond to recessions and expansions. Furthermore, given the number of observations available at a daily frequency, it is feasible to extend the approach to estimation based on a more sophisticated classifications of regimes, such as recession with a binding zero lower bound (ZLB) on short-term nominal interest rates.

Panel A of Figure 2 shows the impulse response of the nominal exchange rate (the Trade Weighted US Dollar Index, Major Currencies) to a unit shock in the Department of Defence’s announcements (daily log volume of awarded contracts, de-seasonalised and de-trended). At the time of the shock, the dollar appreciates by 0.0001 (that is, 0.01%).  This contemporaneous response is statistically significant at the 95% level. Over time, the exchange rate appreciates further and reaches the maximum appreciation of 0.00052 after about 25 working days. Given the amount of volatility in both series (the exchange rate and the Department’s announcements), statistical significance of the point estimates is remarkable.

The direction of the response of the exchange rate is consistent with basic macroeconomic theory; in an economy with a flexible exchange rate, government spending shocks should lead to appreciation of the domestic currency. The dynamics of the appreciation are broadly in line with economic theory as well. While the exchange rate peaks with a delay, the duration of the delay is fairly short relative to previous studies where the maximum reaction was delayed by many months. Interestingly, when we aggregate data to the monthly frequency, the delay becomes more pronounced – the response peaks after six months.

Therefore, the delayed responses in the previous literature may be in part due to the use of low-frequency data.

To contrast the difference between announced and actual spending, we present the daily response of the exchange rate to actual spending (daily payments to defence contractors) in Panel B of Figure 2. We find no significant response at any horizon. The pattern is similar when we estimate the response using data at the monthly frequency; if anything, the point estimates suggest that the dollar depreciates.

This difference in responses to actual and announced government spending shocks can explain why previous studies using actual spending and data at low frequencies failed to find a robust link between exchange rate movements and fundamentals such as the fiscal deficit.

Panel A. Department of Defence announcements

The article already was published on www.VOXEU.org.

1.Auerbach, A, and Y Gorodnichenko (2012), “Fiscal Multipliers in Recession and Expansion,” in Fiscal Policy after the Financial Crisis, A Alesina and F Giavazzi, eds., University of Chicago Press.

4.Blanchard, O, and R Perotti (2002), “An Empirical Characterization of the Dynamic Effects of Changes in Government Spending and Taxes on Output,” Quarterly Journal of Economics 117(4), 1329-1368.