Erase This If You Can. What Ukrainian Bots Are Doing on Ukrainian Politicians’ Pages | VoxUkraine

Erase This If You Can. What Ukrainian Bots Are Doing on Ukrainian Politicians’ Pages

Social media are the main source of news for over a quarter of Ukrainians, with two-thirds of them using mainly Facebook. This social networking website is currently the most popular one in Ukraine.

Disclaimer by Artellence and VoxUkraine. The main objective of this article is to draw the attention of Ukrainian society to the number of bots in social media and their pronounced influence on online communication.

Therefore, it is not surprising that Facebook has become an important platform for promoting Ukrainian politicians ahead of presidential and parliamentary elections. VoxUkraine along with Artellence examined how social bots comment on Facebook pages of the most popular politicians and news about them. Whose page has the most bots, what narrative do they push, which politicians they promote and which ones they discredit? We investigated how social media that were created to connect people are used for propaganda.

We analysed Facebook posts on pages of the most popular politicians and media outlets that received the most comments from bots over the period from May 1, 2019, to July 8, 2019.

How we identified bots

Artellence has developed a machine learning algorithm for bot identification that we used to analyse publicly available information from Facebook’s Ukrainian segment. That included both the comments and the users’ profiles. Only users who have posted at least 10 comments on political topics were analysed. Ultimately, the users we consider to be bots are the ones that the model developed by Artellence believes to be bots with a high degree of probability.

Let’s explain the principle of how bot accounts work. In most cases, these are accounts created and managed by humans. They can write original comments or copy the ones that were written in advance according to the narrative approved by the client. There are also accounts controlled by robots. These require minimal involvement of humans. However, there are few accounts like this and bots are usually managed by humans after all.

The information used to identify bots was collected over 9 months, from November 2018 to July 2019.

Disclaimer. We examined the contents of the bots’ comments and not the principles of how the bots are created and managed. We cannot claim that a bot that heavily comments posts about a certain politician is owned by that politician. Such a bot can be a part of a smear campaign as well.

We were also unable to identify the bots’ country of origin. It is possible that some of the bots come from other countries, including Russia. 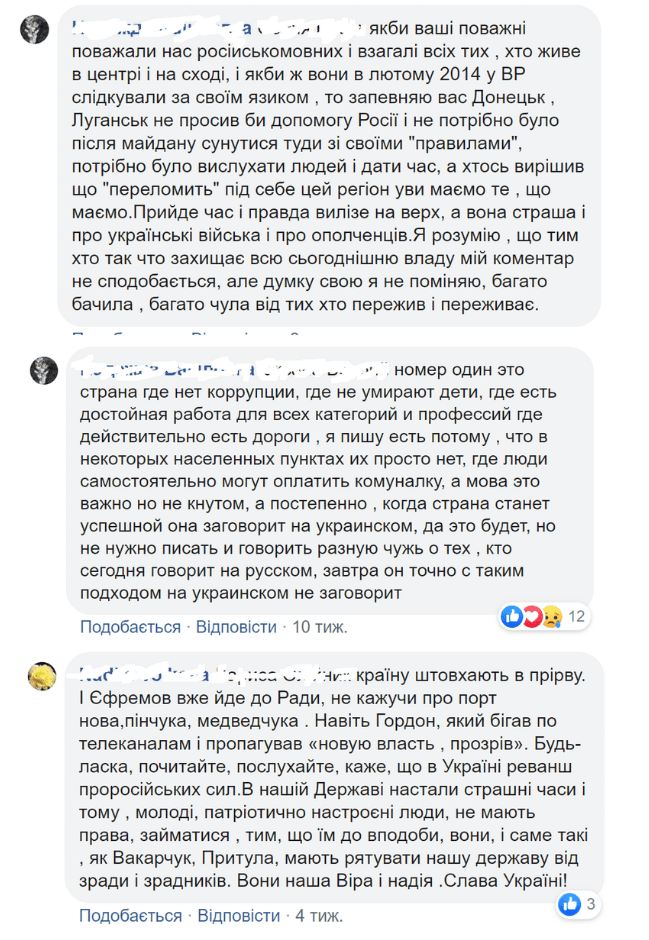 This screenshot shows that bots have learned to write comprehensive comments and are not limited to simple slogans.

The list of politicians was based on opinion polls and the number of followers. 62 pages were chosen, including 26 politicians’ personal pages and 36 pages of political movements or parties. In this article, we will focus on 5 political parties with the highest ratings. At the time the data was collected “Voice” party did not have a Facebook page.

How the news topics were chosen

News topics were chosen by Artellence using word vectors, a natural language processing instrument. An algorithm analysed the contents of posts and clustered the ones that were similar.

For instance, in early May, Ukrainian Prime Minister Volodymyr Groisman made a comment regarding the average wages in Ukraine. Articles about his remark were published on different news website with different headlines, but were the same in essence: “Groisman says minimal wages should be increased x2 in Ukraine in two years”, “When should Ukrainians expect a wages increase”, “Groisman says Ukrainians will earn $620 in 2021”, etc. Different headlines like these were defined as one piece of news by the algorithm.

Ultimately, we only picked articles about politicians that satisfied two criteria: they were posted on a large number of different Facebook pages and they were written in a similar language (this is important for automatic clustering). There were 10 such articles.

During our study we found some bots who posted comments on politicians’ pages regularly, i. e. they had at least five comments there over the period studied. We called them “active bots” and identified the connotation of their comments. It is worth noting that the bots can be owned either by the politician bots write positive comments about or by his opponents, with bots writing negative comments in the latter case. We did not research who the owner of different active bots was.

The politician with the biggest number of active bots, 27 926 accounts, was Volodymyr Zelenskyi. Petro Poroshenko came in second with 20 065 bots. Sviatoslav Vakarchuk ranked third, though the number of bots commenting on his page was significantly lower (823 bots). Yuliia Tymoshenko ranked fourth with 821 bots, while the fifth place went to Volodymyr Groisman (717 bots).

Politicians who had the biggest share of comments on their pages written by bots were Vadym Rabinovych (45% of all comments), Yevhen Muraiev (39%) and Ruslan Koshulynskyi (36%). The smallest share of bot-written comments was on pages of Iryna Herashchenko(0,02%), Semen Semenchenko (0,12%) and Vitalii Klychko (0,13%).

What do bots write about politicians?

Fan bots. The only politician who had more positive comments from bots than negative ones was Yuliia Tymoshenko. Out of 24 364 comments bots have written about her, 11 246 (46%) were positive ones. Meanwhile, only 24% of bot-written comments about Volodymyr Zelenskyi were positive (108 039 positive bots’ comments out of 451 895).

Actualization bots. The main goal of neutral comments is to increase the number of times a politician is mentioned, making him more recognizable and drawing attention to his work. These comments do not praise or criticize and only state facts. The biggest number of actualization comments were posted on the pages of Volodymyr Zelenskyi (128 365 comments) and Petro Poroshenko (97 171 comments), accounting for 28% of all comments posted about each of them. Bots also posted 4 091 neutral comments about Tymoshenko, (17%), while for Groisman and Vakarchuk these figures were 3 333 (10%) and 1 863 (5%) respectively.

Bots on pages of political parties and their leaders

We also examined Facebook pages of political parties with the highest ratings and their leaders to check in what context bots mention different politicians (Fig. 1).

Figure 2. Distribution of positive, neutral and negative bot-written comments on Facebook pages of political parties and their leaders

*Let’s explain how to read this data using the Fatherland party as an example. 37% of comments on the party’s page are written by bots. 69,8% of these bot-written comments contain positive messages about Tymoshenko, while 3% are negative towards Poroshenko and another 3% are neutral towards Zelenskyi. The rest do not contain direct mentions of politicians with a defined connotation.

Pages of European Solidarity and Petro Poroshenko are almost symmetrical to pages of Zelenskyi Team and Volodymyr Zelenskyi. On pages of both parties and politicians bots write about them in about 75% of cases and the prevalence of positive comments is less pronounced than on pages of Fatherland and Yuliia Tymoshenko or Opposition Bloc and Yurii Boiko. The other 25% of comments on pages of Poroshenko and his party and Zelenskyi and his team are about Zelenskyi and Poroshenko respectively.

Which news about politicians the bots commented the most

The more a post is commented, the more people will see it. Therefore, it is possible to inflate a news article’s viewership using bot-written comments. VoxUkraine and Artellence analysed news articles that referenced specific politicians and were posted on Facebook by prominent Ukrainian media outlets and pages that are most popular among Ukrainian users. Ultimately, we chose 10 pieces of news for analysis. We discussed how we chose them at greater length in the methodology section of this article.

Figure 3. Which news did the bots comment the most?

Three out of top 5 pieces of news that were the most heavily commented by bots (i. e. the share of bot-written comments in them was the biggest) were about comments made by Prime Minister Volodymyr Groisman. His speeches usually received relatively few comments, but a significant share of them was written by bots. Bots also heavily commented on posts about events that involved Petro Poroshenko.

Groisman’s statement that there were enough funds in local budgets drew the most attention of the bots. A half of 3 217 comments posted regarding this event were written by bots. We were able to identify the main message of 56 of these comments. About a half of them belong to a category we called “distrust of Groisman”. This category consists of 24 comments, including allegations of negligence, tirades about “backward government” and other similar rhetoric.

Groisman’s speech regarding the law on unjust enrichment also gathered few comments (only 309), but 49% of them were written by bots. In this case comment section was dominated by 44 comments saying that “Groisman enriches himself”.

Articles about the interrogation of Petro Poroshenko regarding the Maidan case also was not heavily commented, but bots pushed it, posting 48% of 257 total comments made. 90 of these comments contained harsh criticism of the former president and only 4 were trying to defend him.

The biggest reaction was caused by Groisman’s comment regarding old parties. It gathered 2 765 comments from real people and 1 447 comments from bots (38%).