At the beginning of 2015, the Ukrainian president approved the Strategy 2020 program, a strategy which includes 25 key performance indicators (KPI) which can be used to assess Ukraine’s progress in implementing the strategy program. In a series of upcoming posts we will evaluate how likely it is that Ukraine will reach some of these KPIs by 2020. In earlier columns, two KPIs were already were evaluated ‘winning 35 medals at the 2020 Summer Olympic Games in Japan’ and ‘being in the top 50 of the PISA ranking’. Here, we evaluate ‘ being in the Top 40 of the Global Competitiveness Index’.

The Global Competitiveness Index (GCI) is an indicator that is compiled each year by the World Economic Forum to ‘assesses the competitiveness landscape of 140 economies, providing insight into the drivers of their productivity and prosperity’. Since the 2006-2007 edition, the report measures competitiveness in 12 pillars (institutions, infrastructure, macroeconomic environment, health and primary education, higher education and training, goods market efficiency, labour market efficiency, financial market development, technological readiness, market size, business sophistication and innovation) which are then aggregated into one index reflecting the overall competitiveness of an economy. While alternative competitiveness indices can easily be constructed, the CGI is both reasonably and widely used and hence makes a good indicator to use as a KPI. The more tricky issue is to define what rank on this indicator should be the target. 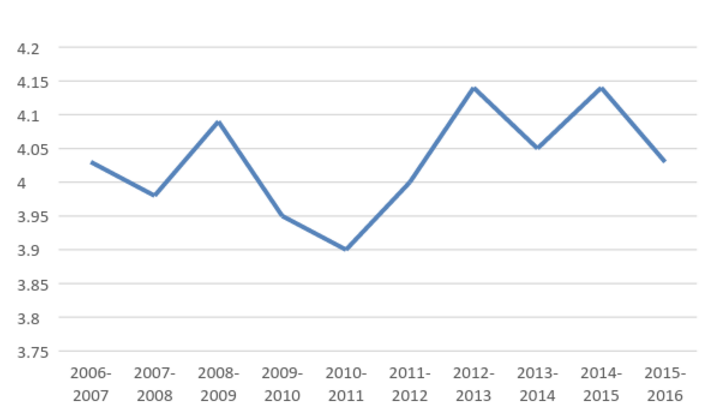 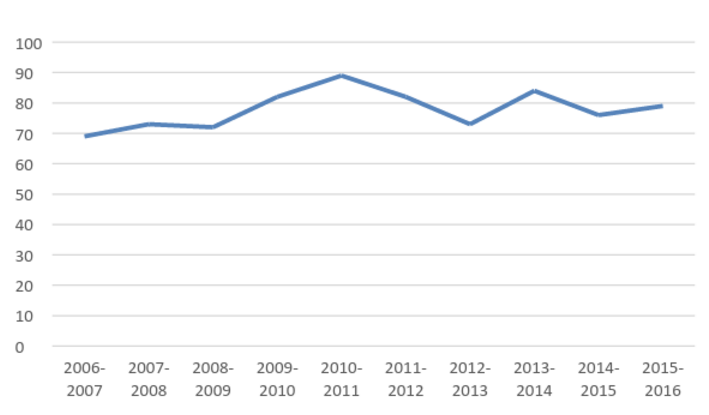 Is it likely that Ukraine will reach this goal?

In the current edition, Ukraine scores 4.03 CGI points. As noticed above, to get to the top 40, a country needs to score about 4.5. Hence to reach this level by the edition 2020-2021 (which is published in 2020, and 5 reports from now) Ukraine will need to increase its score, every year, by about 0.094. As table 1 shows, Ukraine has increased its score by about 0.09 already 4 times (highlighted in green). The problem, however, is that Ukraine has not been very consistent, with improvements in one year typically being undone in subsequent year(s). As a result, the score in 2015-2016 is the same as the score in 2006-2007. Hence, while Ukraine has already shown it can reach the needed improvement in a given year, the difficulty is clearly to repeat this yearly increase consistently across a longer period.

Table 1. Yearly changes in the CGI score of Ukraine

While Ukraine has not been able to increase its CGI score by 0.47 over any past 5 year period other countries have made such progress. Figure 3 gives a histogram of 5 year changes in CGI score [2]. 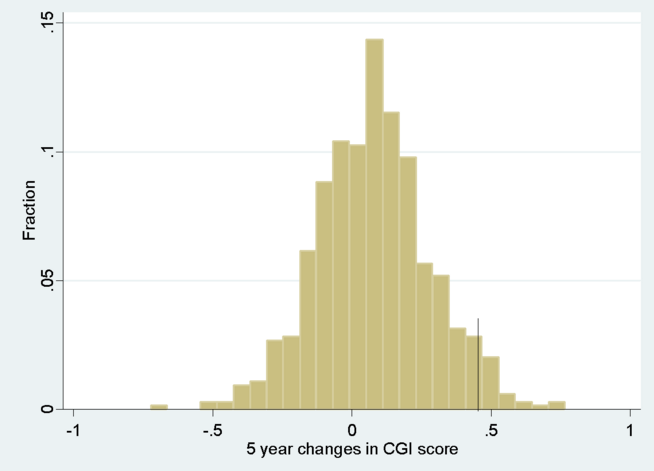 In fact, out of 634 ‘country-5-year’ spells, 22 or 3.5% have seen an increase in GCI score by more than 0.47. These 22 instances come from sixteen countries: Albania, Burundi, Cambodia, Côte d’Ivoire, Ecuador, Ethiopia, Guyana, Nepal, Philippines, Qatar, Saudi Arabia, Sri Lanka, Tajikistan, United Arab Emirates, Zambia, and Zimbabwe. It is important to notice that most of these countries initially ranked much worse than Ukraine and some much better (Qatar, Saudi Arabia, Sri Lanka, United Arab Emirates), and that only the Philippines and Sri Lanka started from somewhat similar levels as Ukraine, when they made their 5 years of progress. The Philippines increased from 87th in 2009/2010 to 52nd in 2014/15. Sri Lanka rose from 81 in 2006/7 to 52 in 2011/12 (after which it again dropped to 68th by 2015/16).

Figure 4. Histogram of 5 year changes in CGI rank (a decrease in rank is an improvement) 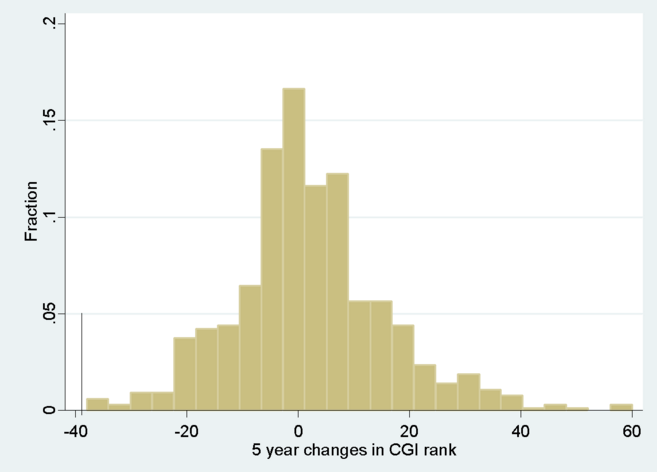 In fact, figure 4 shows that even improving more than 20 places over 5 years is a fairly rare occurrence (about 5%).

The above analysis makes clear that for Ukraine reaching the Top 40 by 2020 is highly unlikely, and would require Ukraine to set a number of world.

So what can one more reasonably expect?

Figure 5 gives the histogram of the 5 year changes in rank for countries that were ranked from place 75 to 85 in the years between 2006/7 and 2010/11 (and hence for which 5 year changes are available). 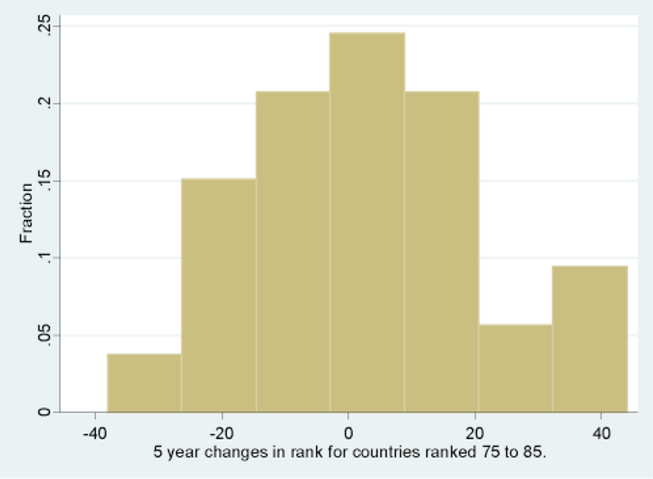 As one can see, big progress in ranks were rare. Yes, the Philippines increased 38 places, Sri Lanka increased by 29 places, and Bulgaria, Peru and Rwanda increased 22 places and Macedonia increased 21 places – but about 90% of the cases increased less than 20 places. This suggest that for Ukraine, reaching the top 70 by 2020 (basically reaching back the best rank it got so far, Ukraine’s rank in 2006/2007) wouldn’t be a bad result, that gaining 20 places and reaching top 60 by 2020 would be a great result and that reaching the Top 40 would mean Ukraine would set a new World Record.