FAKE: Victoria Nuland admitted that US has biolabs in Ukraine

FAKE: Victoria Nuland admitted that US has biolabs in Ukraine

According to the information spread on the Internet, allegedly the United States has admitted the existence of its biolaboratories in Ukraine. To prove this, users refer to a speech by Victoria Nuland, Under Secretary of State for Political Affairs: “There are biological research laboratories in Ukraine. We are currently concerned that the russian militants may take control of them. We are working with the Ukrainian side to ensure that the materials of biological research do not fall into the hands of russian forces. 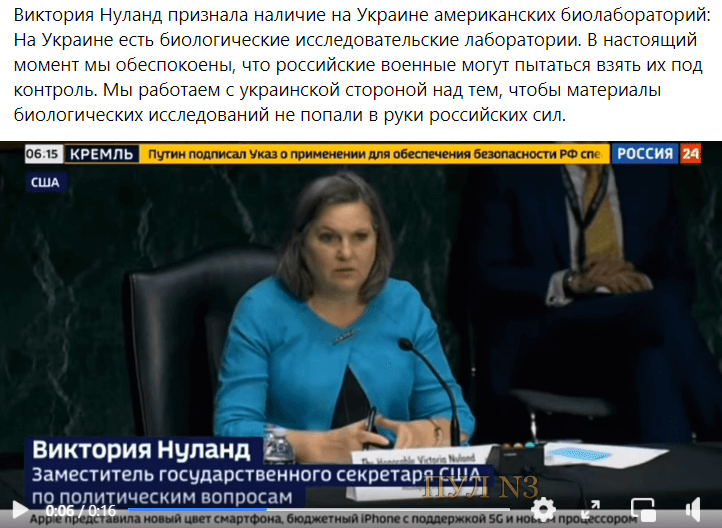 However, Victoria Nuland did not claim that there are American laboratories in Ukraine. Her words were taken out of context.

This fake and other misinformation related to biolaboratories in Ukraine have already been debunked by independent foreign factcheckers from Myth Detector, FactCheck.org, The Washington Post, USA Today, The Dispatch. VoxCheck also talked about this widespread fake as part of the monitoring of russian disinformation.

Hearings in the Senate

On March 8, 2022, the US Senate held hearings on the response to russia’s aggression against Ukraine. During them, Senator Marco Rubio asked Victoria Nuland whether Ukraine has biological or chemical weapons. The Under Secretary of State for Political Affairs did not claim that Ukraine had such weapons. Instead, she only said that there are laboratories in Ukraine whose materials could become dangerous in the hands of the russian aggressor. She also did not say that the laboratories belonged to the United States.

Rubio’s second question was about russian propaganda: he said russia was constantly trying to accuse Ukraine of developing weapons of mass destruction. The senator then asked Nuland if she was 100% sure that any use of biological or chemical weapons in Ukraine would be linked to russian provocations. The Under Secretary of State for Political Affairs replied that only russia could use such weapons.

Since 2005, the United States has been helping to modernize Ukrainian laboratories, conduct research, and improve safety culture to prevent outbreaks of dangerous infectious diseases through the Biological Threat Reduction Program. For example, during the COVID-19 pandemic, these laboratories were involved in monitoring the situation with the new coronavirus. During the entire period of cooperation, the United States has invested about $200 million for the development of 46 laboratories and medical institutions in Ukraine.

These institutions are not involved in the development of chemical or biological weapons. On the contrary, the United States has initiated a program to prevent the development of such weapons. The fact is that the Soviet Union had its own biological weapons program. After its collapse, dangerous biological materials remained on the territory of Ukraine. The U.S. program aims to ensure that these materials are not stolen or used for non-research purposes. Until 2014, the program also extended to russian laboratories.

As laboratories study viruses and bacteria, the materials of their work can be used by the russian aggressor for provocations. That is why US officials discussed the danger of laboratories coming under russian control.