We follow so closely careers of famous compatriots, we take their successes and failures so closely to our hearts. Sometimes this is called “national pride”. VoxUkraine looks at the Wikipedia list of “most famous people” born in Ukraine and finds a few interesting things. But this list of famous provides a few reasons for irony. For example, the number one on the list, Leon Trotsky, hardly had any sentiment for Ukraine, while his neighbour Mykola Gogol’s writings are all about Ukraine, although he was writing in Russian.

Sometimes this is called “national pride” but in reality, perhaps, the thing is that we all want to be proud of ourselves. And the simplest way to achieve this – is to be proud of belonging to the same group (be it nation, race, gender or any other inherited characteristics) as that famous actor, sportsman or scientist. It is a nice feeling to belong to something great and famous. For this reason, making lists of outstanding nationals is so popular. TV shows such as “100 greatest Britons” attract millions of people in the world. Over 800 thousand people voted in a similar Ukrainian show in 2008.

Sometimes the “famous nationals” theme is used by politicians willing to exploit patriotism to achieve their goals. Often, we can hear them saying “our nation produced that many great… [politicians, scientists, artists etc.]” which implies that each of us is very smart and creative. They hope to get more votes by saying pleasant things to people. So recollection of a country’s achievements or “achievers” is quite a popular thing and done in many different ways. Some people would even use it to justify their [irrational] belief that their nation is better than others.

When compiling “the list of most famous Ukrainians”, two methodological questions arise: (1) how to quantify “famous”? and (2) who is Ukrainian? The last question is especially acute given that Ukraine is a very young state, so the citizenship criterion would throw away many centuries of its history.

One of the possible answers to the first question, how to quantify fame, is by studying Wikipedia.

In a recent study published in the journal ‘Scientific Data’, Amy Yu and her colleagues of the MIT Media Lab describe the Pantheon 1 dataset, a database of ‘globally famous people’, people whose biographies are present in more than 25 languages on Wikipedia. A total of 11341 people madeit to this list, 111 of which were born within the borders of present day Ukraine, placing Ukraine 17th on the ranking of countries where famous people were born. 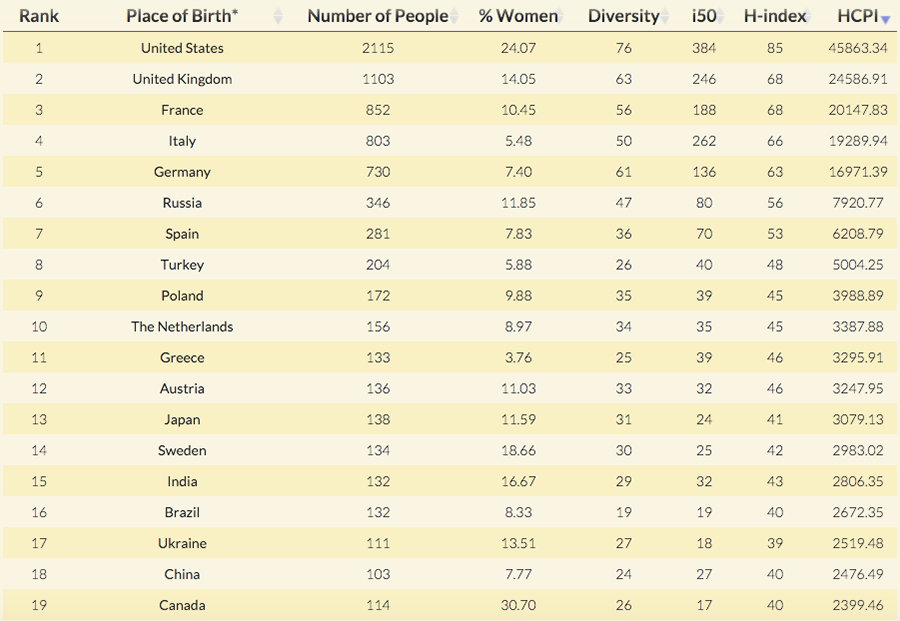 Among these famous Ukrainian-born people there is only one economist, Ludwig von Mises, but there are many soccer players, writers and politicians. This is the consequence of the methodology chosen to compile the rankings.

The dataset ranks persons by page views, therefore it should not be viewed as the list of most important people in terms of their contribution to a particular activity; rather, as a list of currently popular i.e. famous (as the full title suggests) people. Thus, a soccer player may outweigh a dozen of Nobel laureates. It also seems notably skewed toward countries where internet penetration as well as Wikipedia usage is high – for example, among Ukrainian-born film directors on the first place is Otto Preminger, who worked mainly in the USA, while Oleksandr Dovzhenko, who even by western critics is recognized as a significantly more influential contributor to the history of cinema, comes only the third. With dancers this is even more profound, as Serge Lifar has not made it to the Pantheon, while Vaslav Nijinsky did. At the same time, being a European country, Ukraine outperforms China in a number of famous people.

Only 15 out of 111 globally famous Ukrainians are female (13.5%), while Canada has the highest percentage of famous women originating from it (30%). The most interesting part of this ranking is to browse through the list of names of globally famous ‘Ukrainians’. The top three on the list are Trotsky, Gogol and Brezhnev. 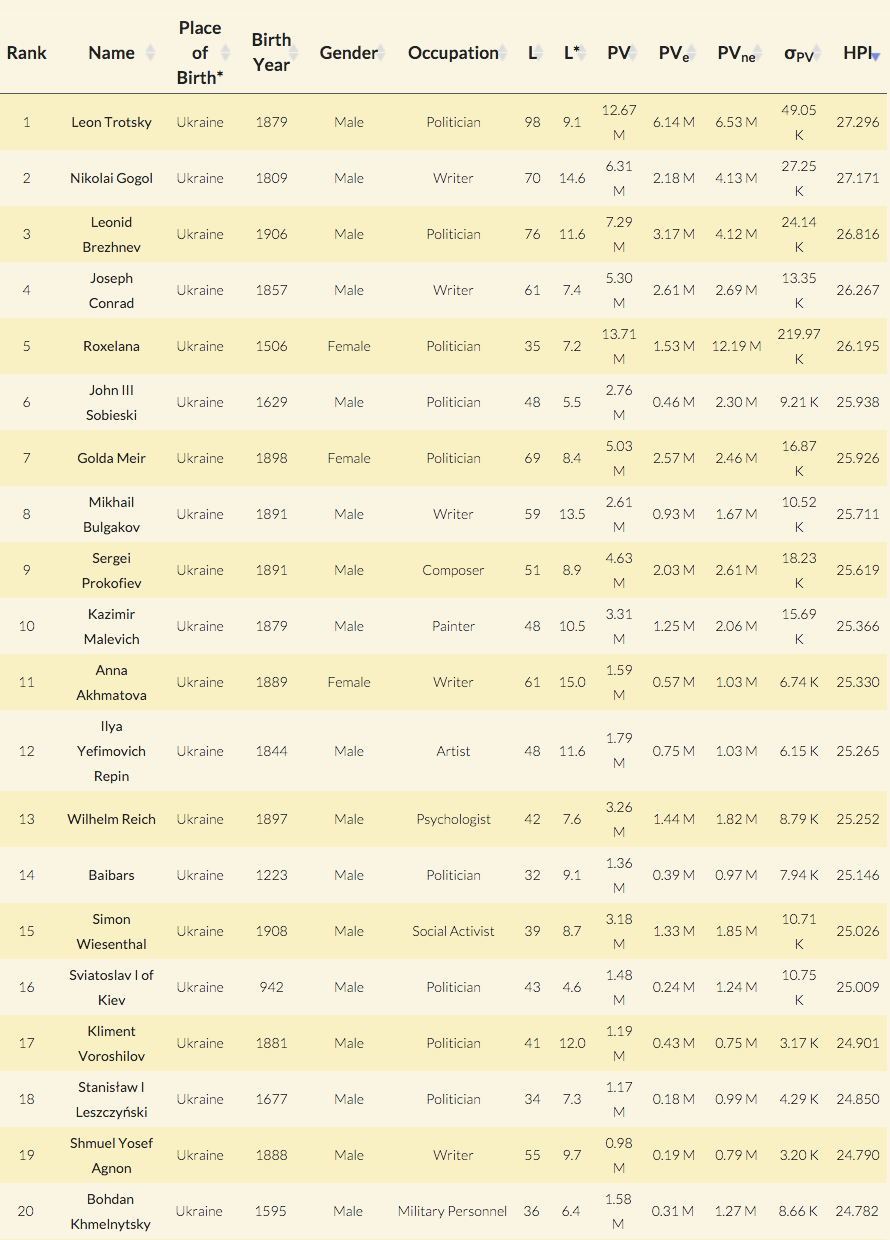 Browsing through the list helps to understand the difficulty of answering the second question, that is defining who is ‘Ukrainian.’ The list uses a place of birth and current borders to define to which country a person is allocated. But of these 111 people probably less than a third would identify themselves as Ukrainians. Others might well belong to Russian, Polish, Jewish and other “halls of fame”. This reflects the fact that territory of the modern Ukrainian state was long divided between Russian, Polish-Lithuanian and later Austro-Hungarian empires. Symmetrically, some of the famous Ukrainians are not in the list because they were born in other parts of the named countries. For example, a famous physicist of Ukrainian-Polish origin, Petr Kapitsa, is on the list of most famous Russians since he was born in St.Petersburg.

This list of famous Ukrainian-born people provides a few reasons for irony, too. Thus, the number one on the list, Leon Trotsky, hardly had any sentiment for Ukraine, while his neighbour Mykola Gogol’s writings are all about Ukraine, although he was writing in Russian (which created the ground for a long-lasting discussion on which culture he belongs to).

Stepan Bandera (64th), the famous fighter for Ukraine’s independence, stands next to Lazar Kaganovych (63rd), one of the organizers of the 1933 famine intended to ultimately suppress the resistance of Ukrainian people to Russian-Bolshevik invasion. One of the greatest Ukrainian writers Lesya Ukrainka (67th) is a “neighbour” of Andriy Vyshinskyi (68th), the organizer of the Stalin’s “great terror” of the late 1930s. Ivan Mazepa (45th), anathemized as a “traitor” by Peter the Great and all subsequent Russian governments stands near the singer Sofiya Rotaru (46th) who would probably get the same definition from many of today’s Ukrainians.

The obvious conclusion from the above is that the place of birth is a poor proxy for association of oneself with a nation, let alone patriotism (thus, Valentyna Matviyenko, the speaker of the Russian parliament, who voted for Russian invasion to Ukraine, is 99th in the Ukrainian Pantheon). A more relevant criterion might well be self-identification – a person is Ukrainian if they ever identified themselves as Ukrainian.

Perhaps, you would expect us to provide an answer to the “how to quantify ‘famous’” question. Luckily, there is no unique answer to it, so each of us can invent their own methodology, and each methodology will have its advantages and flaws. Taking a step back, is there a need to compile lists of “most famous nationals” at all? Isn’t it better to just work on making our country a pleasant living place for people of any nation? This activity would certainly make each of us healthier, smarter and richer.