Despite a significant potential for improving energy efficiency, Ukrainian energy intensity remains far behind the EU benchmarks, two times higher than the world’s average and ten times higher than the OECD average. As energy reforms initiated after the Revolution of Dignity are far from being over, the country continues looking for a sustainable policy mix to reach energy efficiency levels at least those of its neighbors. At the same time, we still rely on the changes in economic structure to help us reduce our energy intensity. In this article we argue why this reliance on less energy-intensive activities is doomed and how we can target efficiency enhancement instead.

Since independence, total energy production and consumption have fallen roughly by 50%. According to Ukrstat data, energy intensity (i.e. energy consumption per unit of GDP) has fallen by 36% since 2007.

The common belief is that changes in Ukrainian energy consumption are mostly attributable to the structural changes in the economy. Popular example is a natural decrease of the share of heavy industry in total GDP as the country develops. Yet while the share of industry in GDP (including heavy industry, manufacturing, and construction) had indeed fallen significantly during the first years of independence, it has only changed by 3 p.p. over the past decade (World Bank 2019). The growth of other industries, on the other hand, is accompanied by the rise in consumption of energy from traditional sources. Today, industry is still the largest energy consumer in the country, followed by residential consumption (figure 1). 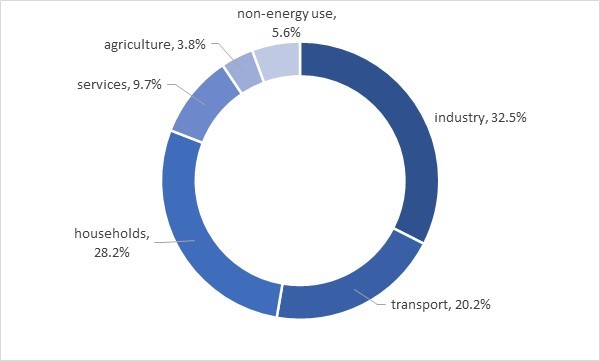 In our research paper we decompose a decline in the energy consumption into structural factors and energy efficiency improvements. We do this by decomposing changes in energy cost in the main industries into several components: change in energy consumption related to the change in industry output, change related to the change in price and change related to energy efficiency. To better understand the concept, imagine an owner of a company producing cement, production of which is quite energy-intensive. What would this person do if energy price and consequently his production cost increased? There are three options. First, he could reduce production of cement hoping that lower supply leading to higher price would compensate for rising cost. Second, he could introduce energy-saving technologies to reduce production unit cost, and third, he could close down the cement factory and switch to production, for example, of tiles, which requires less energy. Our research shows that Ukrainian industrial producers mostly chose the second option – i.e. they responded to rising energy prices by raising energy efficiency of their production rather than reducing supply or switching to other sectors.

On an aggregate scale, this implies that decreased energy use per unit of GDP in Ukraine is mostly caused by energy efficiency increase rather than by changing structure of the economy (i.e. declining share of industry and growing share of services in value added).

Energy decomposition shows that had the energy efficiency stayed at its 1996 level (with the structure of the economy changing), energy intensity now would have been 25% higher compared to the 1996 level. This generally means that for the country to decrease its energy intensity, it is not enough to have a lower heavy industry share in GDP. Lower energy intensity levels are mainly driven by efficiency increase in industrial production and other activities. Investment into efficiency allows firms to consume less energy for the same or higher amount of value-added created.

Figure 2 illustrates this point for the construction sector. It shows that the 45% drop in construction sector energy costs for the last two decades was primarily attributable to the change in energy intensity (energy consumption per unit of output) and price. The same holds for all other sectors which we researched – namely mining, commerce and services, agriculture, and transport. 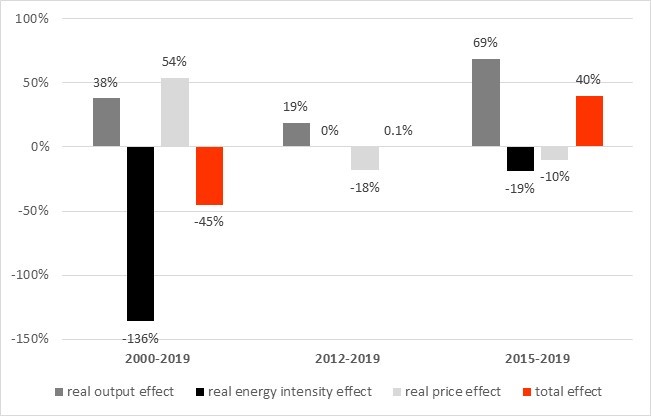 Source: author’s analysis based on the Ukrstat data

We also decompose change in costs of the considered industries into change in energy and other costs. We see that energy cost played a minor role in cost increase for every considered industry (figure 3). We think that it’s mostly due to the fact that firms reacted with energy saving measures to price increases. 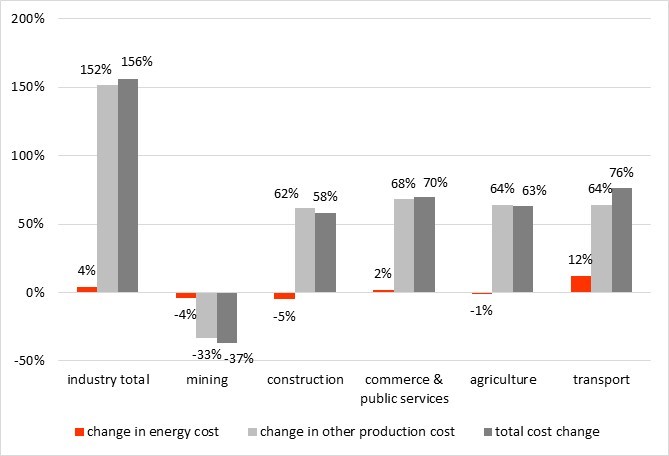 Finally, we estimated the drivers of energy intensity. Similar to Zhang (2013) study for Eastern European countries, an increase in energy prices clearly decreases energy intensity through the efficiency channel. Higher energy prices stimulate industrial producers to invest into energy savings measures. This implies that market-based energy pricing is one of the main drivers of lower energy consumption. Other factors that lower energy use are an increase in technological exports and better governance indicators. Both of these factors imply more investment into modern production technologies which lowers energy use per unit of output. Governance index includes such factors as rule of law, lower corruption and quality of regulations.

We have to change the way we approach energy policy

These results provide several important insights for energy policy making. First, the strategy for the higher energy sector productivity should target energy efficiency improvements rather than rely on the structural changes in the economy.

Second, market pricing for all participants, both industrial and residential, and energy-efficiency modernization programs should be prioritized in any sectoral policy. These factors turned out to be the most significant drivers of lower energy intensity levels. The effective continuation of energy market reform will, to a great extent, affect the ability of the country to save energy in the next decade at least.

Given the significance of institutional factors for energy demand, for any specific sector reform to be effective, it must be accompanied by the respective governance changes. These include control of corruption, regulatory quality, and the rule of law (e.g. antitrust laws) to name a few.

Our analysis shows that targeting market pricing and capital investments in combination with institutional changes is the most effective policy mix to reach lower energy intensity in Ukraine in the future.

Our research concentrated on the incremental energy price dynamics and long-term energy efficiency changes within the Ukrainian economic sectors during the last 24 years. At the same time, the current situation with spikes in gas prices across Europe is quite unique and disruptive on a large scale, and has put energy-intensive industries under the threat of halted production. In response to it, the government started leaning towards price controls as a solution. While such interference in the market has proved to be both inefficient and unsustainable, a well-thought-of strategic policy is required to support the industry in its energy transformation (e.g., tax credits, cooperation with retailers, targeted support). Simultaneously, the industry has to acknowledge that any government support program is only a temporary measure. Firms should see it as an opportunity to prioritize their long-term efficiency strategies if they are to stay in business.

FALSE: Andriy Biletskyi recorded a video after he was detained by «Kadyrovites»