In the previous round, the index was +0.5 points. 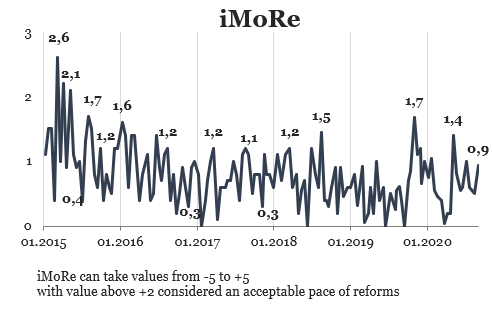 In 2019, Parliament passed the law that was supposed to tackle this problem. According to the new rules, the state would stimulate the development of green energy through “green” auctions instead of “green” tariffs. The Government would set a quota for the electricity production volumes under state support, while the producers would be able to purchase it in a “green” auction. However, these measures were not enough.

Parliament made another attempt to get the situation under control in July 2020 by passing Law 810-IX. Specifically, the Law:

Specifically, it abolishes the requirement that individual entrepreneurs keep a ledger for recording their earnings. Now, entrepreneurs may decide for themselves on how to keep books: whether on paper or electronically. The Law will also help make the taxpayer e-cabinet more convenient, broadening its functionality.

During tax audits, the tax authorities will no longer have the right to interview company employees or employers about the passive income paid, or other additional benefits and compensations.

New fees per air passenger and per ton of air cargo, 0.0 points

One of the funding sources for the State Aviation Administration – a body overseeing the use of Ukrainian airspace and exercising state supervision over the safety of civil aviation and air navigation services – is state fees. According to law, they used to be set by the Cabinet of Ministers. This was unconstitutional, because such charges could only be established and regulated by law.

Some experts assessed the law negatively as affecting the cost of air transportation, with some providing a positive assessment because it resolved a legal conflict. The score ranges from -1.0 to +2.0 points, with the median score being 0.0 points.