iMoRe #57. A powerful surge of anti-reform causes iMoRe to fall almost to zero

The index for monitoring of reforms (iMoRe) fell again almost to zero. An assessment of the progress of reforms for the period of March 20 – April 2, 2017 is +0.1 point on a scale of -5.0 to +5.0. Although there was a series of positive developments in the reform of the monetary sector, business environment and energy sector, experts have noted a significant setback of the index component “governance”.

Among the major events that occurred during this round is the requirement of e-declarations for anti-corruption activities, contractors of  anticorruption NGOs, members of supervisory boards of state enterprises, and public councils under state bodies. This event has received the lowest score from experts in iMoRe history (since the beginning of 2015). Experts noted the negative impact of this law on the progress of anti-corruption and corporate governance reforms.

Among positive changes, experts noted the simplification of procedures on rising external financing, cancellation of a number of barriers for doing business, reduction of the list of dual-use goods, implementation of procedures for providing subventions to local budgets for reimbursement of medicines, and the introduction of a procedure of preliminary price approval in controlled transactions for the purpose of transfer price formation. 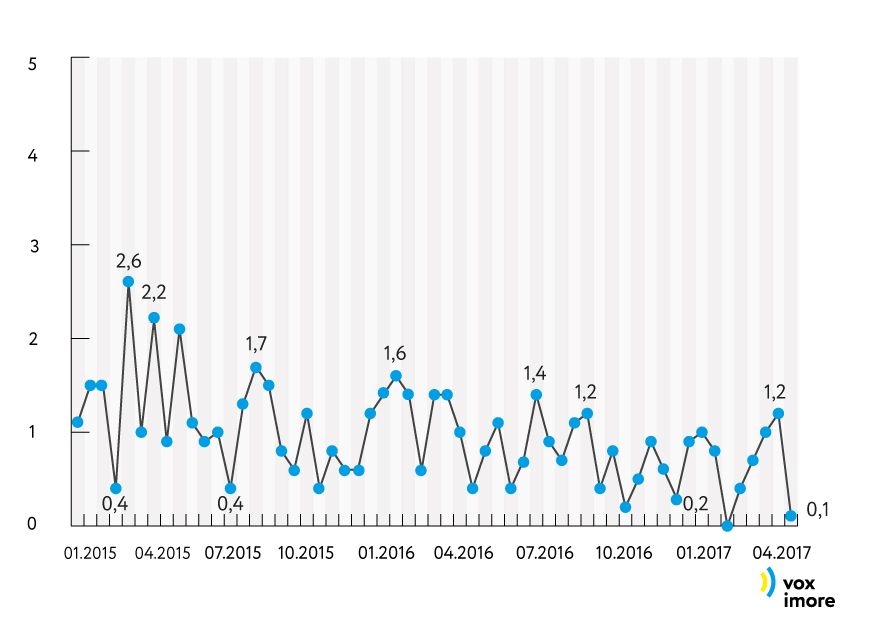 Law 1975-VIII of 23.03.2017 exempts a number of servicemen from having to complete electronic declarations. However, the law establishes the obligation to submit e-declarations for individuals who:

Cooperation with civil society has been paramount to the progress made by Ukraine in the fight against corruption so far. One should avoid any events that could interfere with civil society to play its important role. In this regard, we consider the amendments to the law on e-declarations, adopted recently that require NGO activists and contractors to submit e-declarations, as a step backwards and we expect them to be reviewed urgently.

“There is only one good idea in this law. Soldiers, sergeants and cadets are released from the obligation to submit declarations. Of course, if they are not deputies, prosecutors or officials at the same time. This is exactly what we negotiated with the representative of the President in the Parliament when we coordinated the text of the law before voting.

But the amendments introduced during the voting by the deputies from the “People’s Front” party and “Petro Poroshenko Block” with the requirement that anti-corruption activists, all their partners and suppliers, and all members of community councils without exception should submit e-declarations is a mistake. Kleptocracy still governs the country with its favorite rule “everything is for friends, the law is for enemies.” Anti-corruption legislation is not just transparency. Breach of this law is liable to criminal responsibility. With the existing Agency for the Prevention of Corruption and courts, e-declarations of civil society will be easily used for pressure and persecution against it.

I am for submission of e-declarations by all citizens. But only when the last official who has lied in the declaration or cannot explain the origin of the assets declared in it, will have been punished. ”

“In the country with such corruption risks as Ukraine, the requirement for disclosure of remuneration of supervisory board members is quite reasonable. We have been insisting on disclosure of remuneration, paid to each member of the Supervisory Board since the beginning of the implementation of the corporate governance reform in 2014. We have also pressed for the adoption of a separate anti-corruption policy at Naftogaz and other major state enterprises.

In addition, the shareholders (the state) should be aware that the remuneration of the independent supervisory board members is not decisive in his/her revenues, because otherwise he/she will lose financial independence. It means that the shareholders should be aware of the total revenues of the member of the supervisory board. But it does not mean that these amounts should be publicly disclosed, since checking through the internal control system of the company is enough.

So, from this perspective, a “lite” version of income disclosure of supervisory boards members would be fair.”

— Andriy Boytsun, the Group of Strategic Advisors on the Support for Reforms in Ukraine

“Manipulations concerning non-accountability of non-governmental organizations (NGO) are currently being made. NGOs submit tax declarations to the state and financial reports to donors-grantors and publish reports on their activities. The activists from anti-corruption organizations and their contractors in grant projects are now discriminatory responsible for knowingly submitting false information in e-declarations, late submission of e-declarations and failure to report significant changes in the property or opening a foreign currency account in a foreign bank. This is despite the fact, that the civil sector does not have the powers and does not live at the expense of budgetary funds, not to mention the unjustified use of declaration forms, developed for officials, and violation of several articles of the Constitution.

Also, the lawmaker did not comply with the principle of legal certainty, since the amendments allow a very broad interpretation of the terms which are not defined legislatively. Employers across the country are reviewing the possibility of providing services to public sector.

This provides powerful opportunities to put pressure on the activists who fight governance corruption, blocking their activity, and shows no sincere intentions of state officials to promote real anti-corruption reforms and build constructive relations with public representatives. It is necessary to abolish all the latest amendments concerning discrimination of civil society and its contractors. ”

“Members of supervisory boards of state enterprises and state banks are subject to the law. They will have to report their wealth, income, and change in economic status. Such requirements may discourage potential foreign candidates with necessary experience and competence to participate in competitions for these posts.

It is not the unwillingness of publicity, but the complexity of the reporting process (and sometimes – its banal inability) and, most importantly, the risk of political influence. The responsibility for improperly completed reports can be used as leverage for making the right decisions by independent members of supervisory boards. Since, they will make key decisions at the state enterprises after the implementation of corporate governance reform, and not the representatives of the government as a shareholder.

Almost immediately after the adoption of the Law, the government decided to increase the number of members of the Supervisory Board of “Naftogaz” from five to seven (one additional independent member and one member from the state). Competition for a new independent member will be a litmus test that will show whether the new legislation will affect the willingness of candidates to participate in the competition or the government will try to pick up a loyal person for this position.

One of the latest examples of independence of valid supervisory board members is the voting for the resignation of the head “Ukrstranshazu” due to a number of irregularities in the company identified by the auditor. At the same time, according to the mass media reports, state representatives voted against resignation. In the interests of Ukrainians as the ultimate owners of state companies, supervisory boards of state enterprises should be created and perform independently from politicians. ”

NBU Board Resolution # 26 of 23.03.2017 NBU has simplified the registration procedure for agreements on granting FX credits/loans to resident borrowers in foreign currency by non-residents. Specifically, contracts can now be registered in the new automated registration system for agreements.

“Amendments that the NBU has introduced to the procedure for raising external financing by residents, significantly simplify registration procedures and introduction of amendments to the loan agreement in case of replacement of a resident creditor with a nonresident. In particular, the right to initiate registration or changes to these agreements will be made not only by a resident borrower, but also by nonresident creditor and the authorized bank of the initial creditor.

In addition, the registration of loan agreements will be made upon request of applicants by automatically making entries into the electronic register. Also, the NBU has repealed a requirement for resident borrowers to submit a certificate indicating the actual loan amount and amounts repaid under the loan agreement; revised the list of grounds for cancelling registration of agreements.

These amendments significantly simplify the procedure for raising external financing by residents and extend the rights of creditors. This will encourage foreign creditors to participate in loan projects implemented in Ukraine.

“The NBU has made further steps to simplify the life of business. The procedure for registration of agreements for raising external financing from nonresidents has been changed; some procedural issues that caused trouble have been resolved. Thus, the assignment of the rights of foreign creditor to another foreign creditor will not require actual consent of the borrower – foreign companies will be able to independently apply for the registration of such changes to the NBU.

Some points, related to a change of Ukrainian bank serving credit have been clarified. Transitions to other banks are spreading both due to changes in the financial stability of the bank, which client is the borrower and through unequal approach of banks in cooperation with customers (both purely in the service sector and in identifying risk operations, customer identification, documents required from customers for transactions, etc.). ”