Ukraine’s international broadcasting system was established in 2015 following the adoption of the law On the International Broadcasting System of Ukraine. It aimed to provide foreigners and the Ukrainian diaspora with objective information about events in Ukraine. Specifically, the Government created information channel UA|TV that broadcast internationally. Its main language was English but the channel also produced programs in Russian, Ukrainian, Arabic and Crimean Tatar.

However, in 2019, UA|TV international broadcasting channel’s concept underwent a change. On the basis of the International Broadcasting Multimedia Platform of Ukraine (IBMPU), the Government created the state channel “Dom” to broadcast to the temporarily occupied territories of Crimea and Donbas. The channel’s main language de jure became Ukrainian. The English-language editorial team was disbanded, and now the channel’s broadcasts are mainly in Russian. According to the new concept, the channel became entertainment-oriented and started working for the occupied territories, the localities in Ukraine adjacent to them, and Ukrainian populated places bordering on the Russian Federation.

In June 2020, the President signed a law that legally formalized the new approach to international broadcasting.

At the time of its creation in 2015, UA|TV was regarded as Ukraine’s tool for responding to information aggression on the part of the Russian Federation. It was modeled after such international broadcasters as the BBC, DW, Russia Today, Al-Jazeera, etc. to create a positive image of Ukraine and keep its international audience informed about the events in Ukraine.

International broadcasting needed a well-developed infrastructure – creating foreign language editorial teams (English, Russian, Crimean Tatar, Arabic) and expanding cable broadcasting abroad. The funding was set at no less than 0.06% of the state budget general fund spending for the previous year. However, this figure was achieved only in 2018, with the allocation of UAH 482 million (Fig. 1). 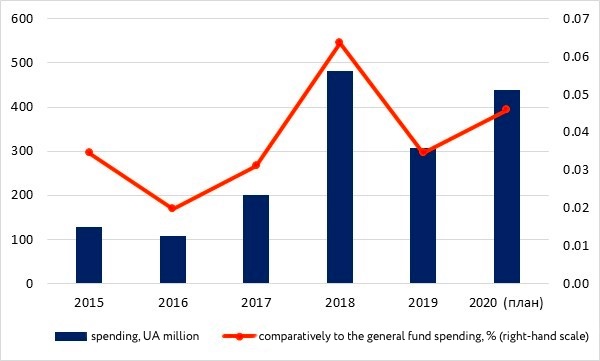 Although the funding of Ukraine’s international broadcasting was incomparable to that of Russia Today, it successfully expanded its broadcasting to 19 countries over four years, opening English, Crimean Tatar and Arabic language newsrooms.

In March 2020, the UATV channel was renamed to entertainment channel “Dom”, ceasing to broadcast internationally.

Short description of the changes

Content of the International Broadcasting Multimedia Platform can now be produced not in English and other languages, but in Ukrainian and other languages. The requirement for 50% of programs in English was lifted.The law obliges the broadcaster to coordinate its program policy with an authorized body. At the time of the channel’s creation, it was the Ministry of Culture, Youth and Sports. Today, the process of transferring this function to the Ministry of Reintegration is underway.

The changes put in place are part of the strategy on information reintegration of Crimea and Donbas creating opportunities for active Ukrainian TV broadcasting in the temporarily occupied territories. In the future, developing the TV project “Dom” may slightly increase the share of Ukrainian audiovisual content consumption in the TOT.

Normally, in a democracy, only that international broadcasting is owned by the state which is available exclusively abroad. Private or public broadcasters work for the domestic audience. The occupied territories, the territories bordering on the TOT and the aggressor country are an exception for Ukraine today, since they are influenced by broadcasting from the Russian Federation. Broadcasting there is not economically profitable for private TV channels, and establishing a state channel is, therefore, necessary.

And yet, such changes clearly demonstrate that the Government’s priority is the temporarily occupied territories.