We got about 200 applications from the public organizations and journalists from all over Ukraine willing to participate in Online-school “Transparent privatization and leasehold: How it works? How can it be controlled?”. We are happy that so many people want to have a good understanding of the reform in order to control its implementation at the local level and cover the issue competently. This article tells about the most interesting facts from the formal opening of the course with the participation of Svitlana Panaiotidi, Dmytro Sennychenko and Oleksii Soboliev as well as the most important points of the first module – Privatization.

The online-course is held by the public organization Internews Ukraine and VoxUkraine within the project of the Institute for War and Peace Reporting (IWPR) with support from the MFA of the Kingdom of Norway in partnership with USAID EDGE.

Go to the link for more details about the course.

“No more public troughs”. Why privatization and leasehold reform is so important?

Deputy Minister for Development of Economy, Trade and Agriculture of Ukraine Svitlana Panaiotidi claims that the main purpose of privatization is to increase the efficiency of the state property management, while the main purpose of the leasehold – to let the business rent the property due to fair competition not due to “fixing”.

“Strategically important state-owned enterprises should be singled out and stay in the property of the state, others, which are still “troughs” for the local “lucky men”, – put up for leasehold.”

Director of the State Enterprise Prozorro. Sales Oleksii Soboliev emphasized that due to transparency, publicity, safety and the greatest possible competition the electronic auctions system Prozorro. Sales has an obvious advantage over other systems.

This is provided by a two-level system: presence of administrator of the auction system Prozorro. Sales and 40 marketplaces connected with the system. “One can participate in an auction via the most convenient marketplace, compete with other participants and get a rental contract without any bribe – formerly it was impossible.”

System has its own business-analytics module which can provide data for writing an article or making a research. Soboliev claims it to be an important transparency element – one can compare the success and experience of different cities in privatization and leasehold procedures as well as monitor these processes in their own city.

Head of the The State Property Fund Dmytro Sennychenko began with the statement that the state should, first of all, fulfill a service function, have strong instrumentalities and be in charge of regulating. Management of hotels, health resorts and other enterprises should be in charge of business. There are 3733 state-owned enterprises in Ukraine. According to Sennychenko, the state, in an effort to manage them, resembles a football referee who also tries to score. “Instead of regulating the game, he competes with the football players, as a result – he poorly does his job and prevents players from doing theirs.”

He mentioned that the purpose of privatization is not a one-time increase of budget funds due to the asset sale. More important is to create conditions for attraction of a private investor who will invest in modernization, job creating, repositioning. “Private sector gets money out from the offshore-mattress and invests it in Ukraine.”

The Fund derived the following formula: investment of 1 UAH in privatization of the asset stimulates 4,6 UAH of investment in that very asset.

All the speakers of the webinar emphasized again and again that for the successful implementation of the reform the crucial things are public attention, inspection, understanding that, due to open access of the data on privatization and leasehold, one could and should control local authorities – monitoring the privatization and leasehold processes and covering best practices of other cities. 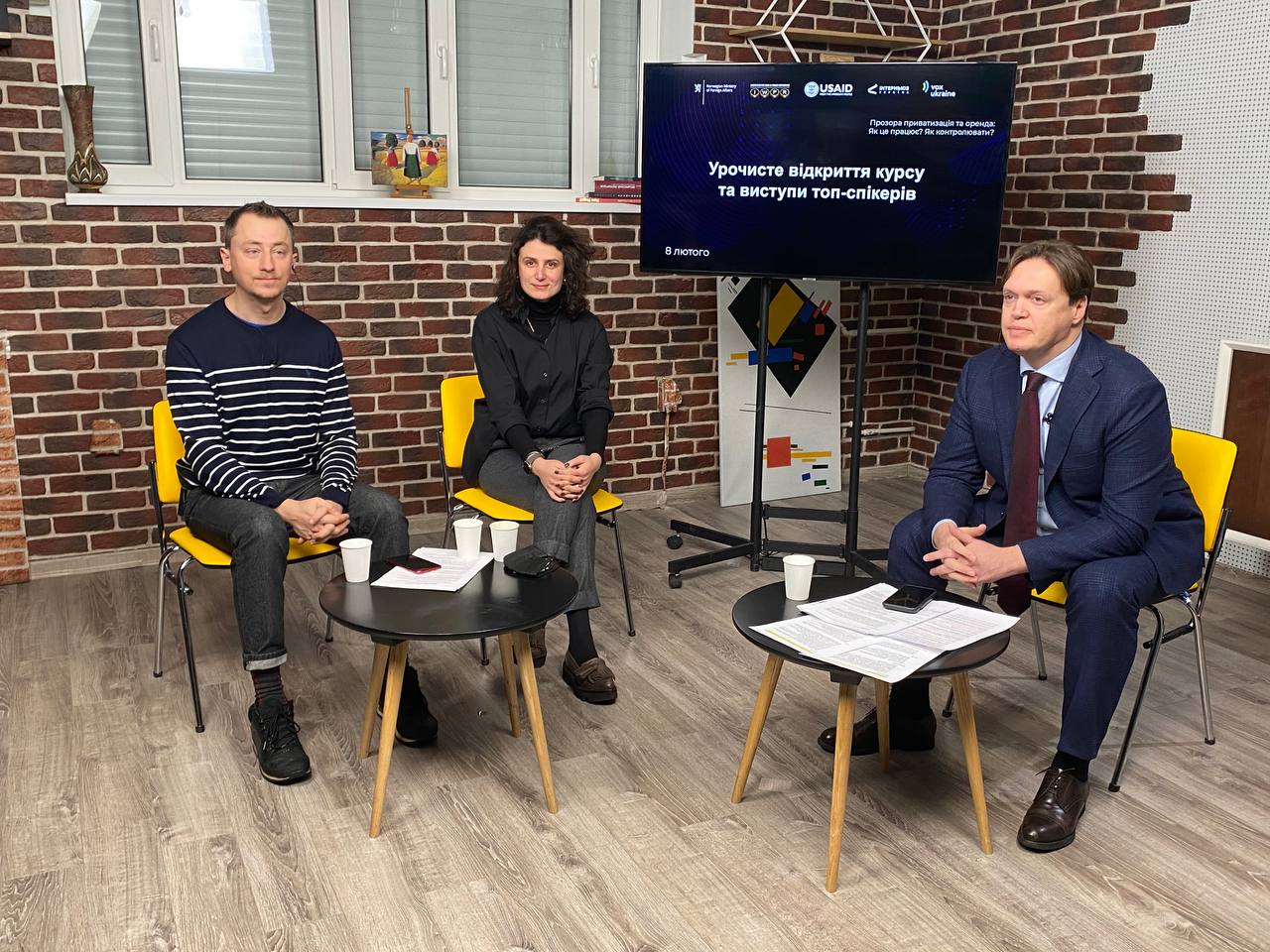 “Privatizer’s Bible”. Privatization on a large scale and on a small scale

The speakers of the first module were Taras Yeleiko, Deputy Head of the State Property Fund, and Vladyslava Hrudova, Head of the state-owned enterprise Prozorro. Sales project office.

1000 state-owned enterprises out of 3733 can be privatized – they do not carry out any strategic functions and can become a magnet for investors. The State Property Fund deals with preparation and sales execution of these very enterprises.

In the public perception there is still a prejudice concerning privatization as an oligarchical takeover of the enterprise. Yet a lot has changed since 1990-s. Now a privatization itself is only the first step. Having paid the market price, the investor is interested in making the money work as soon as possible. Besides, the large privatization objects (with the balance sheet value of about 250 mln UAH) are sometimes encumbered by liabilities – for example, to preserve the main nature of business, to pay off a debt etc.

The enterprises which cannot be privatized are those ensuring national security, natural monopolies, enterprises of a significant importance for a society or those which services/goods cannot be provided by a private sector. These are, for example, such strategic companies as Ukrzaliznytsia (Ukrainian Railways), Ukroboronprom (Ukrainian Defense Industry), Energoatom (National Nuclear Energy Generating Company of Ukraine), Naftogaz (national oil and gas company).

Small privatization target is considered to be state-owned and municipal property, balance-sheet value of which does not exceed 250 mln UAH. The best example – health resorts of a company which are officially closed, but in summer they receive visitors who pay in cash. Small- and large-scale privatization procedures are different. That is why small privatization is being executed much faster.

The most successful examples of small privatization in 2020 are, first of all, privatization of Dnipro Hotel, at which 29 participants of the auction raised the initial price from 80.9 mln UAH to about 1.1 billion UAH; secondly, demonopolization of the alcohol industry. In 2020 there were successfully carried out 20 alcohol facilities auctions which resulted in government revenue of about 1 billion UAH.

The secret of success is consistency. There are three rules for successful sale of the assets: to gather all the information on the target, make this information available for the potential buyers and provide fair non-discriminating and transparent auction.

To coordinate all the processes The State Property Fund follows the so-called ‘’Privatizer’s Bible” – guideline for all the privatization stages and privatization institutions interaction. The information is provided by the renovated website of the State Property Fund with the access to the virtual data rooms. These rooms structurally accumulate all the source information, access to which is provided to the investors all over the world. These are documents of title, technical specifications, contracts, financial statements. The transparency is ensured by the Prozorro.Sales system.

This is a combination of these elements which provides increased competition at the auctions and increased number of the participants – and, as a result, increase of price (in average from 10% in 2018 to 118% in 2020).

Because of a pandemy in 2020 the Verkhovna Rada banned large privatization. Just now, as of February, 4 2021, parliament members agreed the draft of law on release of transparent auctions of large privatization in its first reading. For the second quarter of 2021 it is planned to execute privatization of the Bilshovyk plant, President-hotel and United Mining and Chemical Company.

The main difference between the large- and small-scale privatization is that the large-scale privatization is carried out with the participation of not only The State Property Fund but also representatives of the Ministry of Economy, Ministry of Finance. Besides, it is necessary to involve an independent advisor to coordinate all the processes on gathering and verification of the information as well as communication. For holding an auction there should be established an auction committee. 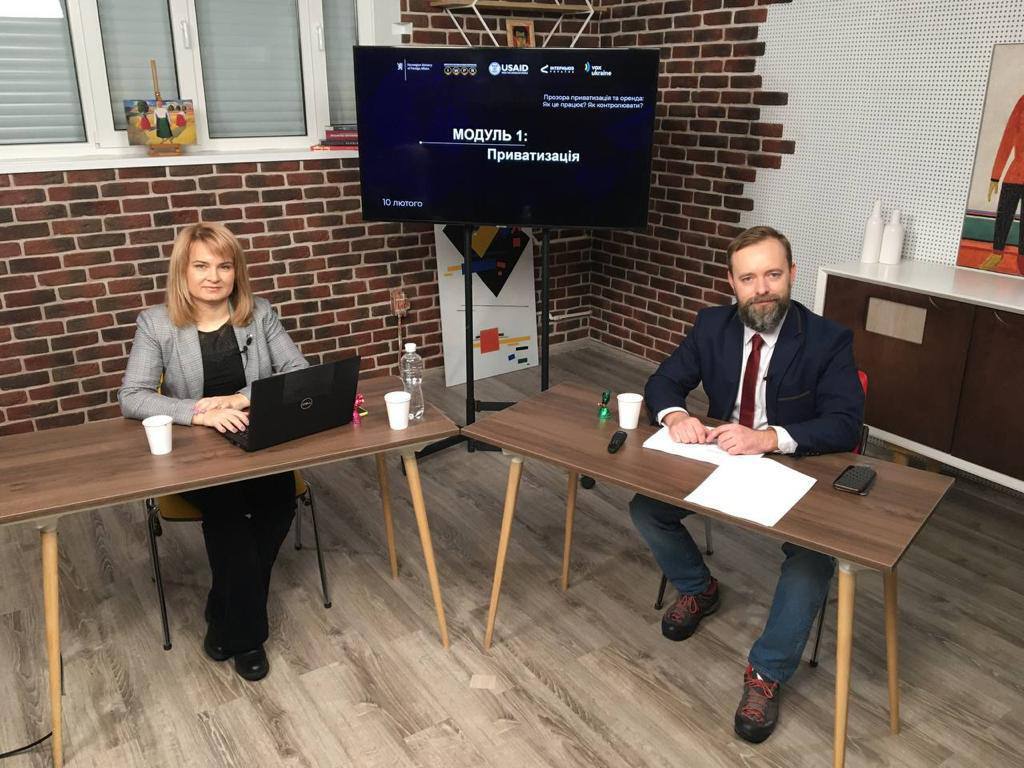 What is Prozorro.Sales and its advantages?

Privatization and leasehold in Ukraine is being executed openly nowadays. It lets to involve a maximum number of the investors or lease holders at the auctions. The main principle is fair competition and high value. For this purpose the initial price is being set on the level not lower than the balance-sheet value of the company, then it is being increased during the fair auction or tender.

E-auctions existed before the introduction of Prozorro.Sales – they were electronic exchanges with different source code. It was impossible to check whether the auctions were carried out transparently and according to all the rules. That is why there was created an auction module with an open code which was placed under government control. Now the state controls this module and the central database.

For example, alcohol plant Nemyrovskyi purchased the only participant of the auction – but he did not know that he is the only one and offered a high price not to lose the asset.

The system conducts 3-round Forward English auction (for ascending the value) as well as hybrid Dutch auction (descenting of the price with the additional round of its ascending). This is a new type of the auction which the team of Prozorro.Sales elaborated and implemented together with the partners from the Deposit Insurance Fund and Kyiv School of Economics. In fact, the Dutch auction is known since the 17th century as “flowers auction” because it had been formerly used (and is used nowadays) for their sale. Now this auction is conducted for searching for the market price if the English auction fails.

Prozorro.Sales system conducts auctions in the following fields: small privatization, leasehold of the state-owned and municipal property, sale of the raw wood. Besides, subsoil licences, use of Ukrzaliznytsia freight wagons, bankruptcy estate and other assets are sold at the transparent auctions.

By now the system has already contributed to the national and local budgets more than 34 billion UAH. The system combines national and private bids due to which the potential buyers have wider choice of the objects and, hence, – possibilities.