In the Blink of an Eye: What the Honcharuk Government Managed to Do in Six Months? | VoxUkraine

In the Blink of an Eye: What the Honcharuk Government Managed to Do in Six Months?

With the turbo-mode of the new government and parliament, the VoxUkraine Reform Index has grown significantly compared to previous years, although it has not reached its peak in early 2015.

The main areas that the government and parliament tried to focus on were: European integration laws, business regulation, public procurement, and privatization (Fig. 1). Land reform has never been completed. But compared to other governments that have not even started it, this is significant progress. 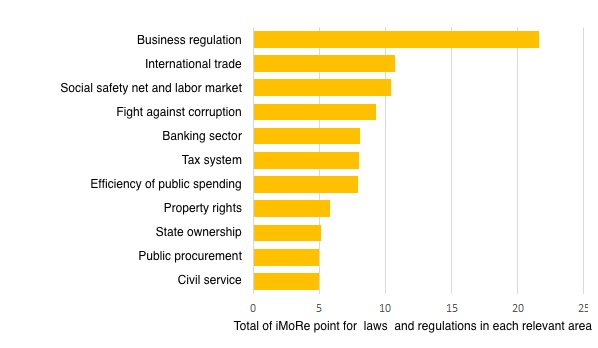 The Honcharuk government cooperated with parliament quite effectively. Many laws were drafted by the government together with MPs, who then introduced these laws into the Verkhovna Rada and lobbied for their adoption. This is perhaps not surprising, given the majority.

In the “turbo mode” format, a number of reforms that had been elaborated earlier and even voted by the previous parliament in the first or second reading were approved. The previous parliament lacked the “political will” to pass laws in the areas of business deregulation, including construction, telecommunications, standards, customs and anti-corruption.

This government has finally moved from theory to specific policy proposals on the land market and labor market. These are difficult questions, and you cannot expect quick decisions here. However, there are already draft normative acts that can be discussed in practice.

We decided to have look which reform bills and orders were the most significant in the Cabinet’s activities, and which reforms he failed to complete (Fig. 2).

Figure 2. The points of the iMoRe received by the reform bills by direction 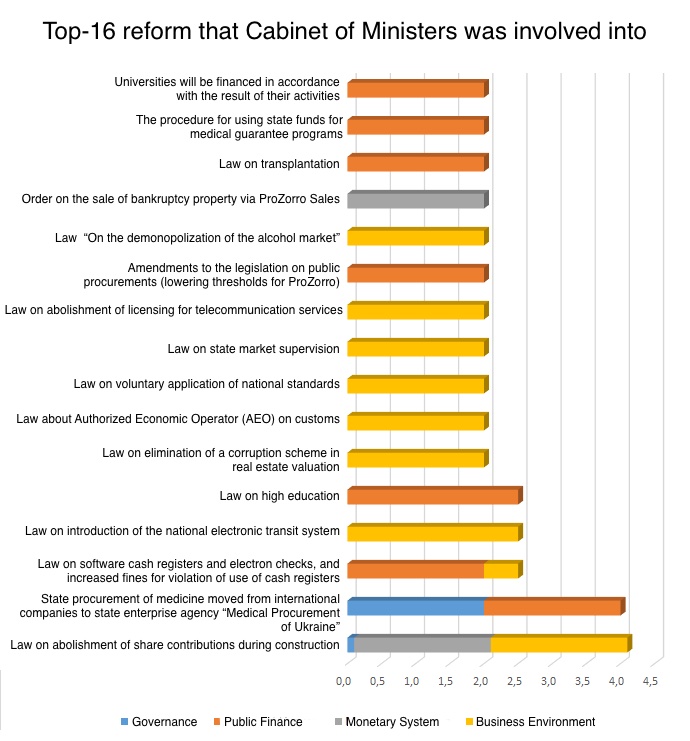 Business is the staff of life

The highest overall rating was given to the reforms related to the business environment. Experts predict that the law, which abolished the share contribution in the construction, introduced a trust institution and the obligation to compensate the losses to minority shareholders, should raise Ukraine’s position in the rating of Doing Business by 15 points. Accepting the possibility of selling bankruptcy property through Prozorro will make it possible for a new Bankruptcy Code to work, which will also increase Ukraine’s position in the Doing Business rating.

An important reform was the law that automated and simplified the real estate appraisal process. The old procedure forced anyone who needed a real estate appraisal to indirectly pay for the entry of information into the database by authorized private companies. Therefore, the value of each real estate transaction was overstated by UAH 680-1800. The new procedure abolished this.

Long-awaited steps have been taken towards obtaining by Ukraine “industrial visa-free regime“ and laws have been introduced that will greatly simplify customs procedures. In particular, due to the Authorized Economic Operator Law, companies that have a proven track record and have never violated customs laws will be able to undergo simplified customs procedures. The introduction of a national electronic transit system will allow Ukraine to eventually join the united electronic system of 35 countries in Europe. For exporters and importers, this means that with one customs declaration, they will be able to transport goods through all countries of the region and not to fill them in at every border crossing. Another important reform was the change of production supervision to market surveillance – now inspectors will check not the production process but the final product.

Telecom operators have felt the ease of regulation – for them was abolished compulsory licensing and bans on the use of 4G mobile communications in the 800-900 MHz band, enabling operators to extend high-speed mobile Internet services to almost all of Ukraine. Air carriers will also have more flexibility in providing communications – airlines have now been legally able to use satellite technology and provide passengers with Internet access at all stages, from departure to arrival.

There were also controversial initiatives in government. The ability to use electronic cash registers that the seller can install on his smartphone and electronic checks has been welcomed by most entrepreneurs. However, some experts and business representatives have responded negatively to increasing fines for cash registers violations and introducing the remuneration to buyers who reported breaches of issuing a check (cashback).

Much progress has been made in the field of state property management – privatization procedures have been simplified and the list of enterprises that are not subject to privatization has been abolished. At the same time, the Ministry of Economic Development and Trade (MEDT) has transferred a large number of enterprises to the State Property Fund, which is a practical step towards privatization. Now it’s up to the SPFU.

The state and municipal property lease law will make this procedure more transparent, and the new public procurement legislation will increase their efficiency.

The third version of the concession law, adopted in the fall of 2019, promises to be successful – the concession agreements for two seaports have already been concluded (however, one of them was blocked by the court).

Creating the preconditions for the demonopolization and privatization of “Ukrspirt” is undoubtedly a step that no previous government has ventured into.

Finally, Naftogaz’s unbundling was carried out and an independent gas transmission system operator was created, which will allow to continue to move towards the implementation of European rules in this market. However, the unbundling of payments for gas transportation (which is also a prerequisite for establishing market relations in this area) was under-communicated and therefore negatively received by the population. And the law on subordination of the National Commission for State Regulation of Energy and Public Utilities (NKREKP) to the Cabinet of Ministers of Ukraine under the authorship of MP Andriy Gerus is clearly a step backwards, since the regulator of the energy market must be independent.

The government and parliament planned to “reboot” the civil service. The new law significantly simplified the dismissal and recruitment of civil servants. Thanks to these norms, the government has dismissed several heads of state agencies, state secretaries of ministries and hired new ones. Time will tell how long these people will work and whether they will be more effective. The new law allows the newly appointed government to release these people just as the previous government did.

In order to “reboot” the civil service, the government several times revised the conditions for competing for civil service and created new directorates. However, in most ministries these directorates are still on paper.

The government also tied the wages of ministers, their deputies and heads of state-owned enterprises to the national average.

The government tries to complete decentralization reform before the 2020 local elections. During the cadence of the Government of Oleksiy Honcharuk, 95 new amalgamated territorial hromadas (communities) were created (in total in 2015 – 2019 1048 ATHs were created). At the legislative level, the regional council has been excluded from the process of adopting promising community-building plans, which will allow the government to approve these plans much faster. However, there are also problems – some of the criteria in the updated Methodological Guidelines for determining the capacity of communities do not relate to this capacity. For example, the area of ​​a community or the number of children of school age in it.

Despite the government’s assurances, there is no certainty about continuing the implementation of medical reform, the second phase of which is set to start on April 1st. Almost the entire team that implemented the first phase of the reform was released from the MoH. And the coronavirus situation has become a real media failure for both the MoH and the government. The positive steps are the transfer of a part of medical procurements to a newly created state procurement agency, the adoption of a new version of the law on transplantation and the Procedure for the use of public funds for medical guarantee programs. Today, however, a “rollback” of medical reform is likely and can have unpredictable consequences.

The major projects that the government has not completed are the opening of the land market and the liberalization of labor legislation. We have high hopes that these reforms will be completed by the next government.