In Unity There Is Strength: The Effect of the Decentralization Reform on Local Budgets in Ukraine | VoxUkraine

In Unity There Is Strength: The Effect of the Decentralization Reform on Local Budgets in Ukraine

The decentralization reform has demonstrated impressive results already in the first two years. Amalgamated territorial communities (ATC) have collected between 5% and 122% more local taxes than before territorial consolidation, and have spent more on local infrastructure development (between 46% and 569% more). Simultaneously, the economies of scale are observed as after the amalgamation of communities, the share of local government expenditures decreased by 12% relative to total expenditures, and the share of remuneration costs decreased by 4%. Given these encouraging results, it is important to preserve the financial autonomy of ATCs and not to transfer part of their income to the enlarged Ukrainian rayons (counties).

Amalgamated communities can become the core of a new social contract between citizens and the state. If ATC leaders better inform the public about the use of community funds, locals would understand better how the taxes paid are allocated. In turn, local governments would make a bigger effort to maintain the quality of their services, spend less on “local bureaucracy” and thus encourage better tax compliance. Therefore, a virtuous circle of integrity is formed, which is the basis of a more favorable business environment and higher levels of trust in local government.

Decentralization in Ukraine implies two important results for long-term economic growth: (1) more local taxes being paid and (2) reduction of expenditures on local government. These two hypotheses underlie this research, and we tested them statistically by examining budget revenues and expenditures of local communities before and after amalgamations. The results of the study confirmed both hypotheses. More details below.

Decentralization reform in Ukraine commenced in 2014. The goal of this reform was defined as “the formation of the efficient local government and territorial organization of power…”. The success of the reform in achieving the declared goal was discussed mainly in the discourse of improving the quality of public services provided in amalgamated villages and cities, i.e. better roads, a larger number of youth and cultural projects, a wider variety of administrative services provided on site, etc. However, a crucial aspect is almost completely ignored in research and public debates: the reform impact on the economy.

The final stage of the reform is currently underway, but it ignores the interests of the main actors in this process, i.e. local communities. Compulsory amalgamations of local communities that have not yet consolidated in order to make it to the local elections in October 2020 is reminiscent of the Soviet desire to complete the “five-year plan in two years”. Proponents of decentralization are particularly concerned with the uncertainty around newly formed rayons. It is inadmissible to transfer part of ATC revenues to the rayon budgets, especially the largest source of ATC’s own income that is 60% of personal income tax (PIT) paid by local residents. To cherish the achievements of the decentralization reform, in particular the trust from the local business, now the most important on the agenda is to maintain the independence of the ATCs from the newly formed rayon administration and leave the money to local communities, at the grass-roots level.

The Effect of Amalgamations on Local Budgets: The Increase in Revenues and Expenditures

In order to estimate the net economic effect of the reform, only those types of local budget revenues and expenditures whose change may consistently be tracked both before and after reform were analyzed (see the full list in the Annex). The list includes local taxes, non-tax revenues, as well as proceeds from capital management transactions. In addition, all local expenditures were analyzed apart from expenditures on education, healthcare and social assistance*. In the study, we tried to “cleanse” the impact of the amalgamations on local budgets from the influence of other factors, such as initial business activity in the community, inflationary increase in tax revenues over time, local cultural traditions, etc.

After the formation of ATCs, local tax revenues increased

Amalgamation of local communities resulted into an increase of revenues from real estate tax by +121.7% and from tourist fee by +8.8% (per capita). As can be seen in Figure 1, although by absolute value these tax revenues in ATCs are smaller on average than in non-amalgamated communities, their growth rate has accelerated after territorial consolidation. The reform must have significantly impacted these two specific types of taxes due to the fact that ATC leaders are making targeted efforts to improve tax administration (for example, they started designing and adopting a special provision on tourist tax in many ATCs while the former has been absent in most local communities). These efforts are additionally confirmed by an increase in revenues from other sources of own revenues of budgetary institutions (per capita) by +81.7% after the merger. These revenues are non-tax in nature, so their growth may indicate an improvement in the management practices of local governments.

As a result of amalgamations, there was also an increase in revenues from the single tax on individuals by +5.4% and from the single tax on legal entities by +23.4% (per capita). This result is consistent with the findings of Hamaniuk and Palchuk (2020). This means that the decentralization reform could inspire both local businesses and ATC residents to do business and legalize it by paying taxes to the local budget. 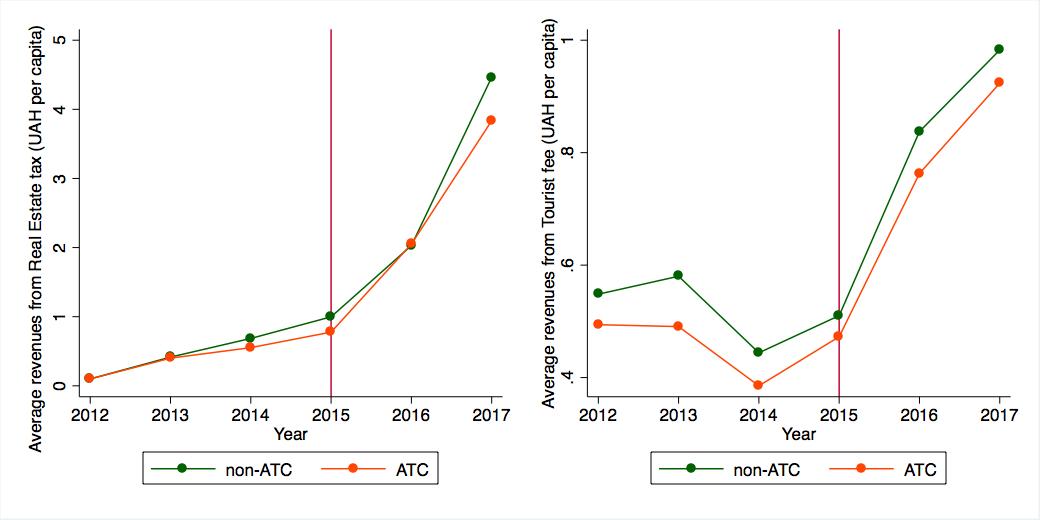 After the formation of ATCs, investments in local infrastructure and development expenditures evidence an important increase

Local expenditures are also growing faster after the formation of an ATC. Namely, per capita expenditures on roads management increased by +59.2%, on housing and public utilities by +205.6%, on sports events and facilities by +301.5%, on leisure clubs by +46.2%, on libraries, museums and exhibitions by +569.3%, on development programs by +443.6%. Subsidies and current transfers to enterprises from the local budget increased by +200.7%, and capital transfers to enterprises increased by +361.8%. The dynamics of these expenditures are shown in more detail in Figure 2.

Figure 2. Average per capita expenditures by year across ATC and non-ATC communities 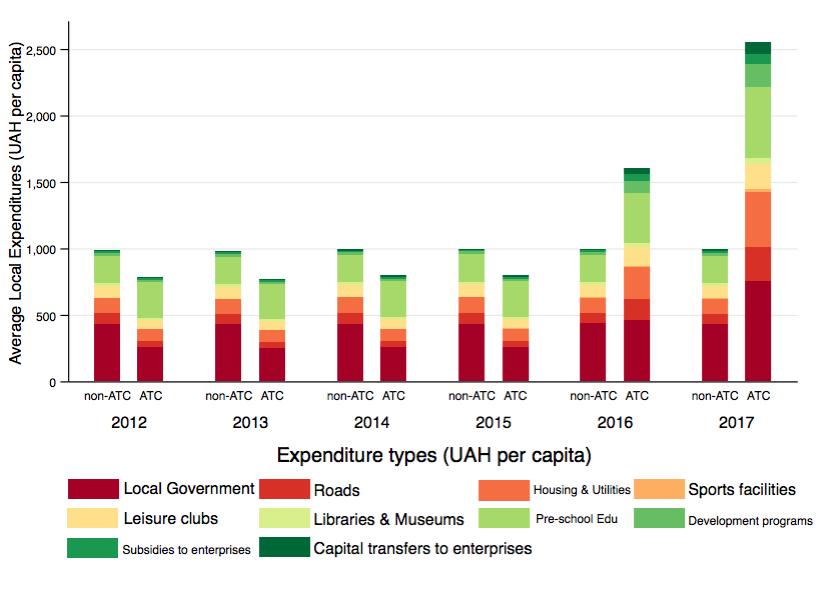 Source: data from the State Treasury Service of Ukraine and openbudget.gov.ua

Figure 3. Average per capita expenditures on development and consumption by year across ATC and non-ATC communities 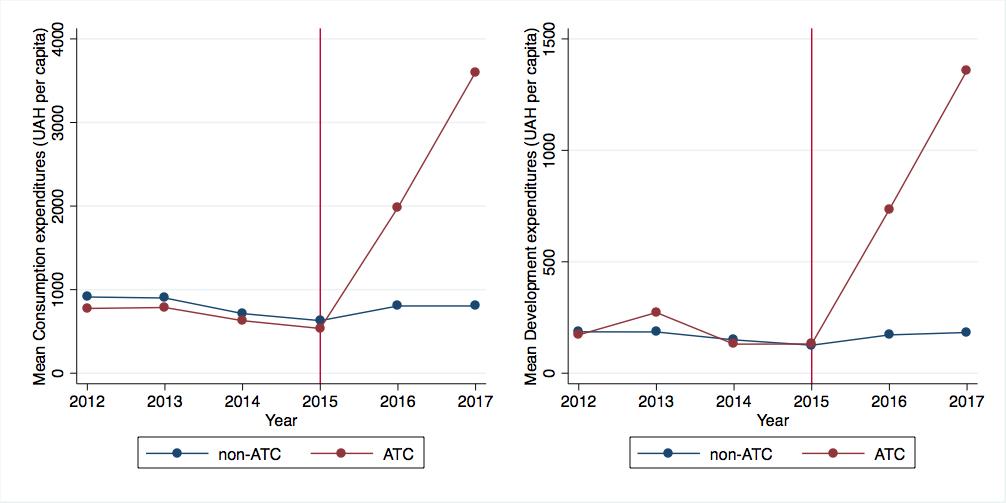 After the formation of ATCs, administrative expenditures on local governments decreased 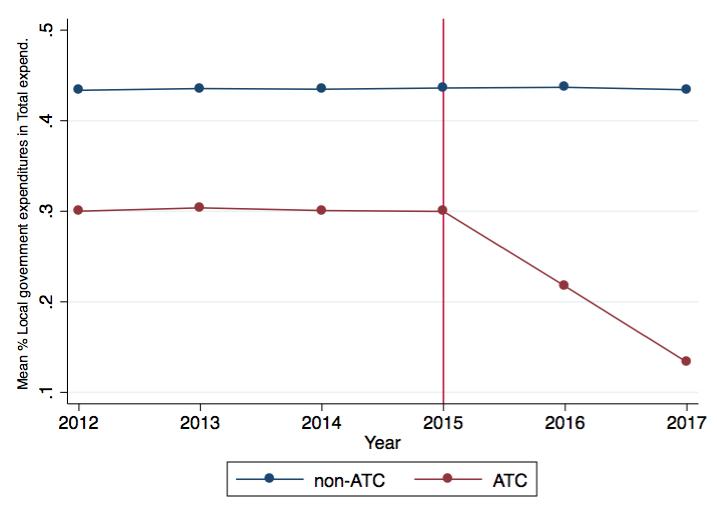 Thus, already in the first two years, the reform achieved the expected results. In amalgamated communities, tax revenues increased and administrative costs decreased compared to the non-amalgamated ones.

After amalgamations, the existing ATCs were able to increase net tax revenues from several types of local taxes (e.g. single tax on individuals and on legal entities, real estate rent, tourist fee). We assume that granting local governments with a bigger authority as well as state transfers to exercise this authority have allowed them to invest a lot in community development. Accordingly, local residents saw on what their taxes paid were spent and became more willing to pay them. Local governments have also been given incentives to improve the local business climate in order to collect more taxes and thus have more funds for local development.

If part of the ATC income, which has been preserved and spent locally for 4-5 years, is taken away in favor of the rayon budget by a directive order, this will lead to a loss of trust from local businesses, and their willingness to pay taxes in benefit of their community will decrease. This is why all 60% of PIT and other taxes paid according to the Budget Code must remain in ATC’s budgets.

Most likely, the economic performance of voluntarily and compulsory amalgamated communities in Ukraine will be different. In other countries, where amalgamations took place on a compulsory administrative basis, more modest or insignificant results of similar reforms have been found (e.g. 1, 2, 3). This is natural, because from the very beginning, the voluntary amalgamations build more trust of community residents in each other and in local authorities, as well as more responsibility to the community. It is important not to destroy this trust and responsibility, while maintaining the current financial autonomy of ATCs.

The study is based on the Difference-in-Differences (DiD) method in a panel context (e.g. 1, 2, 3), which is the most popular method in the empirical literature on the effect of amalgamations. To apply this method in the case of Ukrainian reform, only those types of local budget revenues and expenditures were identified, whose change may consistently be tracked both before and after the reform (see the full list in Table 1 below). They were defined via analyzing the Budget Code last revised before and after the decentralization reform (as of 26.10.2014 and 24.12.2017 respectively), namely the articles 64, 69, 86, 88-89, 91 and 93 of the Budget Code. These budget indicators have become dependent and control variables in the model.

Table 1. Local budget revenues and expenditures in ATCs and non-ATC settlements analyzed in this study

This study used data on yearly executed budgets of local councils in Ukraine for six years, i.e. four years before the decentralization reform (2012-2015) and two years (2016-2017) after. The data source is the World Bank BOOST portal. As after the formation of an ATC, the revenues and expenditures of the local councils that became a part of this ATC were no longer reported, to enable the estimation, the budgets of villages that subsequently amalgamated were aggregated into so called proxies of ATC budgets for the pre-reform period. Thus, ATC budgets (2016-2017) were compared with prototypes of ATC budgets (2012-2015).

During data preparation stage, the budgets of village, town and city councils that were located in the Autonomous Republic of Crimea, and the budgets of temporarily uncontrolled settlements as well as settlements on the confrontation line in Donetsk and Luhansk regions were excluded from the dataset. The reasons are that there existed no possibility of them to become a part of an ATC, and that the data is available for the years 2012-2014 only.

Also, the budgets of the cities of regional importance were removed from the dataset because in 2016 they could not amalgamate with other councils to become an ATC. Because they belong to the control group of non-ATC settlements, due to their large size, these budgets would “contaminate” the effect of the reform on this control group, so they had to be excluded. The data was also deflated by the CPI as of December of each previous year.

The basic DiD model specification is the following:

The effect of the reform is estimated as a coefficient on the independent binary DiD variable Diff_in_Diffit that indicates amalgamated communities after the reform. Therefore, all local budgets represented in the dataset fell into one out of four categories, depicted in the Table 2 below.

Because the treatment effect is “contaminated” by time and fixed effects resulting in the standard errors being biased downward (Cunningham 2020), in our research a basic DiD model was extended to a two-way fixed-effects model with six years and over 9,000 groups:

IDi is community-individual fixed effects, and yeart is time effects.

Since the source of variation comes from time-constant differences across villages, clustering at the village level is applied (McKenzie 2017).

* Statistical analysis cannot be applied to these types of expenditures because they have increased in accordance with the law, as the reform assigned ATCs fully responsible for financing these areas.