Less Means More? Why Are The “Servants” Proposing To Reduce The Tobacco Excise Tax? | VoxUkraine

The EU systematically and gradually imposes higher excise duties on tobacco products. According to the WHO, this reduces deaths from lung cancer and makes the nation healthier. In Ukraine, there is a similar initiative – the so-called “Seven-Year Plan” of increasing such excise taxes.

Yet, at the end of February, Davyd Arakhamia from Servant of the People came up with a proposal to reduce the excise tax on heated tobacco products, claiming it would generate higher and more stable budget revenues from this sphere. What is wrong with this amendment, and why raise excise duties on tobacco at all? We will explain it in more detail below.

The higher excise tax and, with it, prices for tobacco products reduced demand for them. Already in 2018, the sales of cigarettes as the main tobacco product in Ukraine fell from 68 to 45 billion cigarettes (Figure 1). 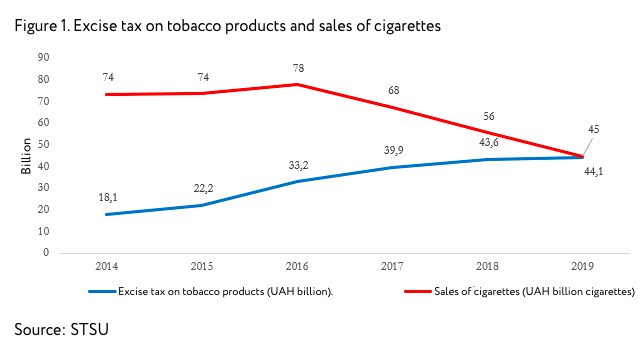 Over the same period, revenues from the excise tax on tobacco products made in Ukraine and imported into the customs territory of Ukraine increased from UAH 39.9 billion to over UAH 44 billion. And the share of smokers, i.e. those people over 12 who smoke, dropped from 23% to 16.8%.

It should be realized that excise duties are not a means of pumping up the budget so much as a tool to manage demand. Excise duties are usually imposed on what is harmful to human health or nature (among the best-known excise taxes are those levied on alcohol, tobacco and fuel). It is essential for the state because, with a decline in tobacco consumption, the healthcare systems’ costs for related problems decrease. According to the Kyiv School of Economics study, complying with the current laws regarding increasing excise taxes will prevent nearly half a million deaths. And the additional revenue that excise taxes generate for the central and local budgets can also be spent on healthcare.

Besides, back in 2006, Ukraine ratified the WHO Framework Convention on Tobacco Control. The Convention states, inter alia, that “in setting and implementing their public health policies with respect to tobacco control, Parties shall act to protect these policies from commercial and other vested interests of the tobacco industry in accordance with national law.”

On February 25, the Servant of the People faction leader, Davyd Arakhamia, proposed reducing the excise tax on heated tobacco products (HTPs) in Ukraine by 30% from April 1, 2021. He submitted the respective amendment to Bill 4278. The MP spoke about an agreement reached with Philip Morris, a company distributing tobacco products in Ukraine. In exchange for a reduction in excise tax, it allegedly undertook to pay a guaranteed UAH 11 billion into the 2021-2022 budget (regardless of sales numbers).

Submitted to the Committee on Finance, Taxation and Customs Policy, it was voted for by 19 out of the 25 deputies, most of them members of the Servant of the People party.

Later, at the “Servants’” congress on March 1, Arakhamia said the initiative mainly aims to prevent an increase in HTPs smuggling, which, according to him, could trigger an annual increase in excise taxes.

In other words, with an increase in the excise tax on HTPs, demand for the so-called “grey imports” from Belarus, Moldova and Russia will increase. After all, “the manufacturing company does not suffer from this because all these IQOS in Russia, Moldova and Belarus were made by Philip Morris. But the state receives less revenue from excise taxes than its due, substantial amounts,” Arakhamia said.

The manufacturers and distributors of tobacco products, including Philip Morris, often make a similar argument. They claim that by smuggling a box (500 packets) of sticks, the transporters make twice as much as on a box of cigarettes. With an increase in excise taxes and, consequently, higher HTPs prices, the difference in the price of a box in neighbouring countries’ markets will be about $600. Also, HTPs packs are more compact than cigarettes, which makes their transportation across the border easier.

“The price of sticks for battery-powered heating systems may become 40% higher than in neighbouring Moldova, Belarus and Russia. As a result, the illegal market for these products is likely to grow. According to experts, it’s a 200% growth“, Christina Linichenko, FMCG head at the European Business Association, commented in the advertising piece on Ekonomichna Pravda, published with the support of Philip Morris.

Besides, according to an agreement with Philip Morris, as reported by Arakhamia, HTPs prices in Ukraine will remain unchanged – that is, they will not decrease, and the products will not become cheaper. This reportedly will not make them more accessible to children or bring an increase in the smuggling of cigarettes or “grey imports” of heated tobacco products.

As of March 2021,  the price for HTPs in Ukraine starts from UAH 58, while in Poland, Romania and Hungary, it is twice as much – UAH 107, 104, 134, respectively. In Russia, Moldova, Belarus, the price does not differ much from the current price in Ukraine – there, HTPs cost UAH 56, 61, 59. Therefore, with the 40% increase the experts talk about, the price for HTPs in Ukraine will start from 78 UAH and be approximately halfway between the prices of the first and second groups of countries.

For such proposals, Arakhamia was accused of lobbying for the interests of tobacco companies. He considers his amendment logical as it allegedly protects budget revenue. However, according to the Kyiv School of Economics estimates, if Arakhamia’s amendment is passed, the budget is likely to be short of UAH 3 billion of the excise tax on HTPs in 2021.

Also, read ”Government wants to give the tobacco company a gift of UAH 3 billion from the state budget in 2021”.

Excise duties in Europe: from EUR 2 to 8 per pack

According to the WHO, raising excise taxes on tobacco is the most effective way to reduce tobacco consumption. The organization estimates that if all countries increased the excise duties by 50%, there would be 49 million fewer smokers, which would prevent at least 11 million smoking-related deaths. According to the organization, an average 10% increase in excise taxes on tobacco products would reduce their consumption by 4% in high-income countries and by 5% in the middle- and low-income countries (including Ukraine) per year.

Interestingly, it is in the European region that tobacco excise taxes have been increased the most in the world in recent years. Thus, excises exceeded 75% of the retail price (the minimum level recommended by the WHO) in 15 countries in 2008 and 26 in 2012.

Among the countries levying the highest excise duties in Europe are Ireland (EUR 7.57 per pack), the United Kingdom (EUR 6.57) and France (EUR 5.24). The latter imposed a significant increase in prices and taxes on tobacco between 1995 and 2005, which potentially reduced lung cancer mortality by 10% among men aged 35-44. In 2016, the National Smoking Reduction Program was launched in France. As a result, daily smoking in this country declined from 29.4% of the population in 2016 to 26.9% in 2017, i.e. one million people quit smoking in one year. In the longer term, consumption halved from 96 billion cigarettes (six cigarettes per adult per day) in 1992 to 48 billion (three cigarettes per adult per day) in 2018.

Among the countries levying relatively low excise duties on tobacco products are Bulgaria and Hungary. Back in 2013, Bulgaria’s deputy finance minister Lyudmila Petkova confirmed that there would be no excise tax increases on cigarettes and alcohol in 2014, despite the EU directive that cigarette excise rates must reach a minimum of EUR 90 per 1,000 by the start of 2018.

Petkova explained that the tax rate would instead rise gradually during 2015-2017. She also stated that excise on cigarettes was expected to provide 6.1% of government receipts during 2013, and that new excise tax stamps would be introduced during the following year.

As of 2019, the excise duty on cigarettes in Bulgaria was EUR 1.76 per pack, being one of the lowest in the EU.

In Hungary, too, the tax on cigarettes does not comply with the European Union regulations’ requirement. Because of this, the European Commission referred Hungary to the Court of Justice in 2019. Before that, in 2017, the EU set a deadline for Hungary to increase cigarettes’ excise to the required minimum gradually. The European Commission explained that such a low excise tax in Hungary harmed competition with other member states, also being contrary to EU health policy.

As estimated by KSE and VoxUkraine, the current plan to increase excise should reduce smoking among adults, i.e. people aged 16 and older.  Currently, 17.4% or 6.1 million people in the country are smokers, and if the plan is implemented by 2025, the number of smokers will drop to 14.7% or 5.2 million adults. It will save 588,000 people by preventing deaths directly related to lifelong smoking. Implementing the plan to increase excise taxes is therefore not so much a question of growing budget revenues but of the life and health of Ukrainians. The proposed reduction in excise duty also contradicts the European directive on reducing smoking, which Ukraine has committed to comply with.