Let there be NATO! VoxCheck Draws a Line between Wants and Reality | VoxUkraine

Let there be NATO! VoxCheck Draws a Line between Wants and Reality

After gaining its independence, Ukraine was choosing potential development paths and started looking for partners in future cooperation. In the security aspect, Ukrainians split into several camps. One supported more intensive cooperation with the North Atlantic Alliance; others did not want to give up on the pro-Russian direction, while the third group supported neutral, non-aligned status.

The NATO course has now been laid down in the Constitution, yet the society is still divided. Despite this, compliance with the principles and criteria necessary for joining NATO is a 2025 objective for Mr. Honcharuk’s government.

VoxCheck decided to answer some questions about NATO that the Government of Technocrats (as they call themselves) will have to face.

When did Ukraine stop being non-aligned?

“I am going to vote against this declaration (amendment to the Constitution which cements Ukraine’s course towards the EU and NATO – ed.) for three reasons. First of all, because in 1991, when the Declaration of Independence was adopted, and it was adopted following a referendum, there was a supplement that said that Ukraine was non-aligned. That was the decision of the people of Ukraine made via a referendum.”

Ukraine proclaimed independence on 24 August 1991, and the independence referendum took place later – on 1 December 1991. Thus, the speaker is confusing the sequence of events. During that period, there were no other referendums, where the people of Ukraine could express their attitudes towards NATO. The Act of Declaration of Independence refers in its text to the Declaration on State Sovereignty (July 1990), in which then Ukrainian Soviet Socialist Republic expressed the “intention to become a permanently neutral state that does not participate in military blocs.”

Yet, today, this does not matter as the stance of Ukraine has changed over 28 years. If during the first years of independence NATO membership was neither foreign policy nor a national security priority, then since the beginning of the military conflict in the East, non-aligned status has been canceled, and Ukraine-NATO cooperation has intensified.

Is NATO about democracy?

Democracy, individual liberty, and the rule of law are the basic principles of NATO. The ways of achieving those principles are both political and military (Articles 2 and 3 of the Founding Treaty), while peaceful political mechanisms are the priority for the organization.

Do Ukrainians want to join NATO?

“In our country, there are probably 1.5 million people who want to join NATO. But I have another question – why have the other people, of which we have like 30 million, not answered whether they want it. Obviously, that is because they do not want to join! Still, democracy is the opinion of the majority. So let’s take it into account.”

If we look at the numbers provided by Vadym Rabinovich, the situation is as follows – 95% have not yet made their mind, and only 5% support joining NATO. But this ratio does not reflect the actual state of affairs.

We have compared relevant results of public opinion polls by (Rating, Democratic Initiatives, SOCIS). They are similar. So, we provide the results of the most recent one – dated 13-27 December 2018. The respondents were asked about the vote they would make during a referendum on joining NATO. 44% of the respondents would vote “for” joining NATO, 30% would vote “against”, 10% would not vote, and 17% have not made their mind yet.

See the charts of votes cast during a supposed referendum on joining NATO over the past 5 years below. The ratio of “for” and “against” asserted by Rabinovich has never been out there, so his statement is a lie. 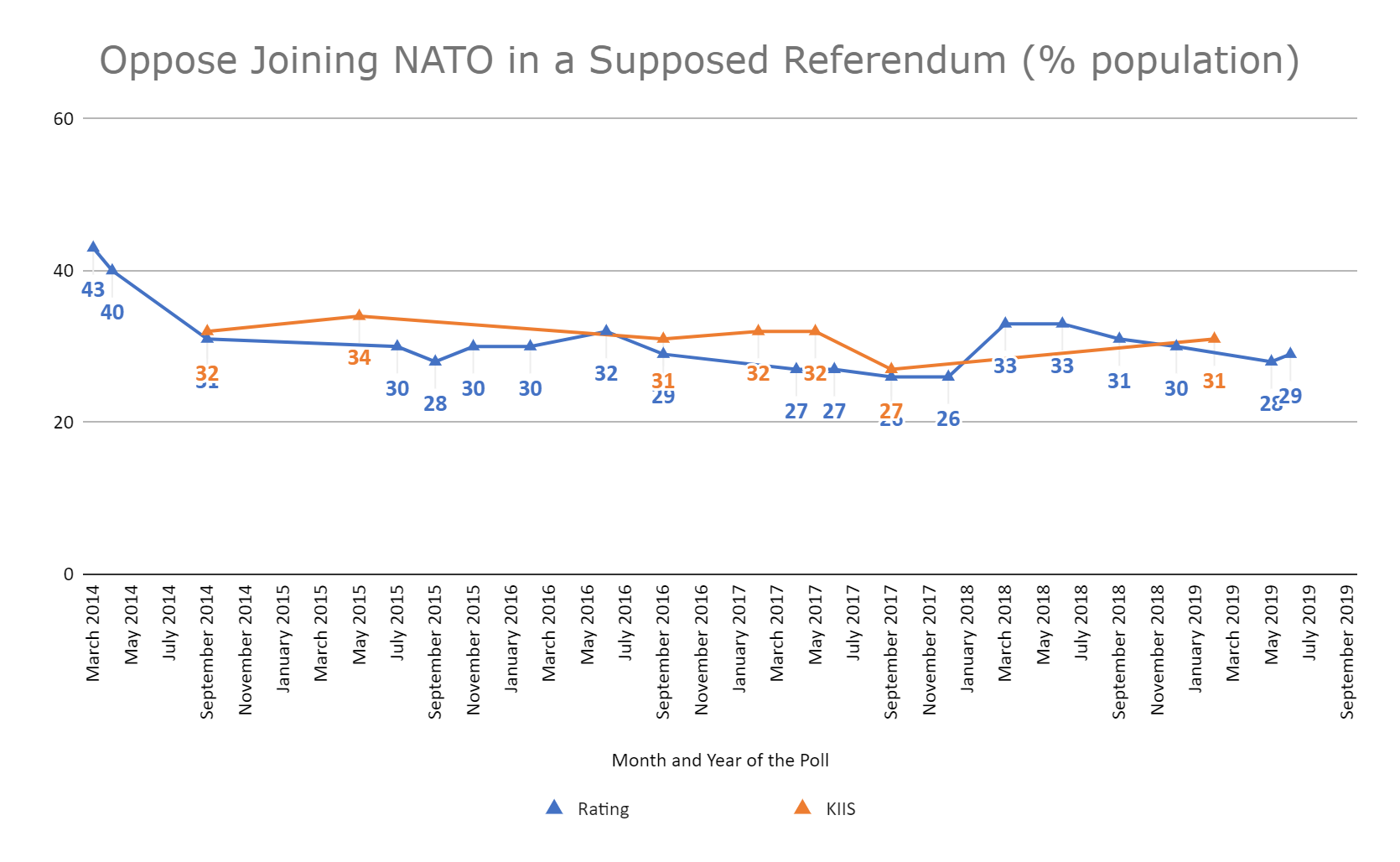 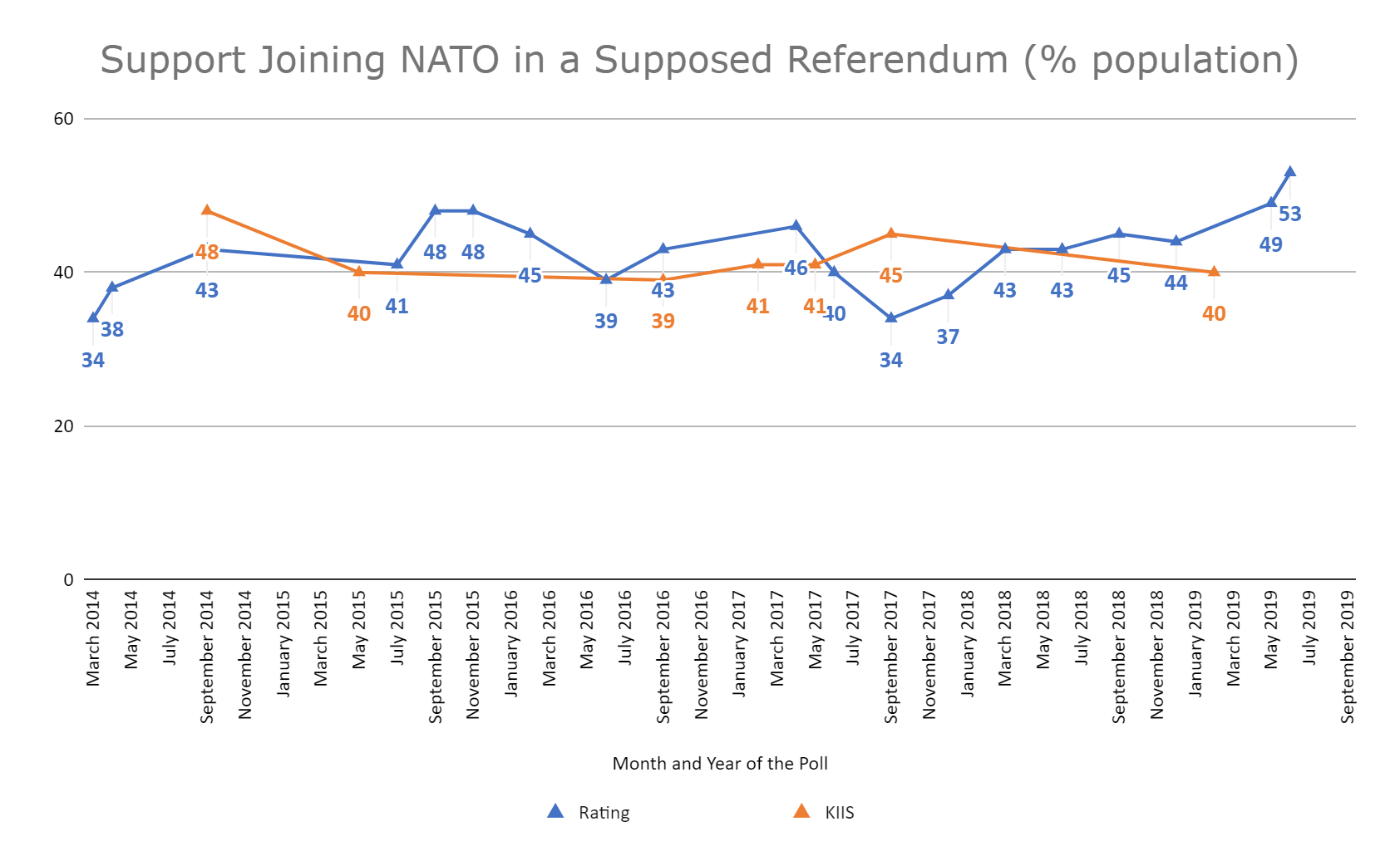 According to recent data (June 2019), if a referendum about Ukraine joining NATO were to happen, 53% of the respondents would vote “for”, 29% – “against”, the others would either abstain or have not yet decided on their answer.

As we can see on the last chart, approximately a third of Ukrainians do not support joining the Alliance. Such a negative attitude is primarily conditioned by the fear that membership in NATO can drag Ukraine into NATO military actions. Among the other reasons are the perception of NATO as an “aggressive imperialistic bloc”, a belief that Ukraine needs to be non-aligned, a conviction that in case of joining NATO, foreigners and foreign capital will start laying down their rules here.

Can Ukraine join the Alliance while the conflict in the east is still going on?

“However, they (NATO) have such conditions…We are having a war on our territory –  that is already one of the reasons that will not allow us to join.”

Article 10 of the NATO Treaty stipulates that the Parties may invite any other state in a position to further the principles of this Treaty and to contribute to the security of the North Atlantic area to accede. Consequently, acceptance of new members is a political decision, individual for each country. None of the official documents says that war on the territory of a country is a condition that necessarily blocks the country from joining the Alliance. However, Study on NATO Enlargement says that candidate “States which have ethnic disputes or external territorial disputes…, must settle those disputes by peaceful means… Resolution of such disputes would be a factor in determining whether to invite a state to join the Alliance.”

Apparently, an unresolved conflict, especially one that has no steady ceasefire, as is the case of Ukraine, is a roadblock on the way to joining NATO since the Alliance undertakes to guarantee the security of its members. Thus, this statement by Zelenskyi is true.

We expressing gratitude to our interns Kateryna Skoropad and Alina Sokolenko for their help in preparing this article.