National Bank Has to Remain Independent from Political Pressure | VoxUkraine

National Bank Has to Remain Independent from Political Pressure

The National Bank of Ukraine (NBU) has been a leader of reforms in Ukraine since 2014. Specifically, the central bank introduced a number of policies that lay foundation for economic prosperity of Ukraine.

First, the NBU adopted a new policy framework: inflation targeting with a flexible exchange rate. This policy introduces a nominal anchor (low and stable inflation) and provides a powerful absorber of domestic and external shocks (flexible exchange rate). This is a significant step forward because the previous policy framework based on a fixed exchange rate made the economy prone to banking and currency crises (indeed, Ukraine experienced three severe crisis between mid-1990s and 2014). 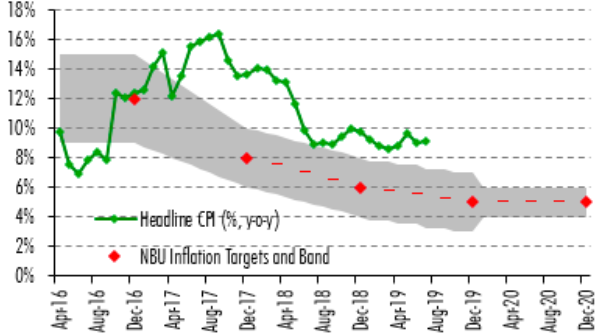 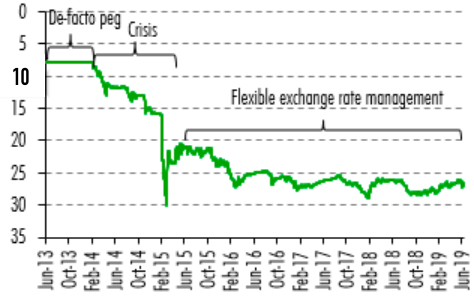 Second, the central bank made a strong effort to clean up the banking sector and make it more transparent and resilient. While consolidation of banks, a wave of bankruptcies, and the nationalization of PrivatBank (the largest private bank in the country) were costly, accounting for 12% of GDP, a sound banking sector improves allocation of resources in the economy, a critical ingredient for economic growth. Furthermore, the central bank introduced new systems of risk management and other macroprudential tools to ensure that the taxpayer will be less likely to carry the burden of bailouts.

Finally, the central bank underwent a series of structural reforms aimed to ensure sound policymaking. For example, decisions on monetary policy are now made by a committee rather than a single person. The new law adopted in 2015 enshrines the independence of the central bank, which is highly important for a country with weak institutions and strong political influences.

The central bank received not only significant powers but also was assigned a new degree of accountability. In contrast to pre-2014 policies, the NBU now publishes a wide range of documents to provide the public with policy decisions and analyses. The NBU was recently recognized as the top central bank in terms of transparency.

The government was forced to nationalize PrivatBank in 2016. It was a classic too-big-to-fail case: because PrivatBank accounted for a third of retail deposits and a half of payment transactions, its bankruptcy would have led to a financial crisis and a deep downturn in an already weakened economy. The cost of the bailout amounted to approximately 5% of GDP. Pre- and post-nationalization audits revealed massive fraud. Despite this strong evidence, there is a significant risk that previous owners can take control over the bank and/or receive a sizable compensation from the government for the takeover. If this scenario is realized, the NBU (and more generally the country) will face unprecedented challenges. Indeed, the scale of possible cost in this scenario is colossal not only in terms of possible payments (which can undermine the fiscal position of the government and foreign reserves of the central bank) but also more fundamentally undermine the ability of the government and the central bank to govern the country. For example, a reversal of the nationalization will greatly weaken the de facto ability of the NBU to regulate banks and may reignite related-party lending and other abuse that led to the massive crisis of 2014-2015.

If the Ukrainian judicial system turns out to be unable to reach a just verdict, the NBU and the government should actively seek justice in foreign jurisdictions where the rule of law is stronger.

For the first time in Ukraine’s history since 1991, legislative and executive branches of the government are controlled by one party (Servant of the People). As a result, the ruling party has significant leverage over the central bank and other government bodies. It would be most unfortunate if the ruling party used its powers to undermine the NBU as an institution. Attempts to influence policy or leadership will be dire. Recent examples of Argentina and Turkey where the executive branch meddled with central banks illustrate that such interferences lead to a macroeconomic crisis, which Ukraine can hardly afford given its geopolitical and economic situation. The central bank will be well advised to build defenses to political interference. International partners such the IMF and donor countries should be informed about political pressure. The central bank should also increase its outreach to the general public to ensure that the NBU has public support as an institution tasked to provide low and stable inflation, a major public good.

Recent developments in global markets suggest a significant risk of a global recession in the near future. Like many other emerging economies, Ukraine may be hit hard by the global slowdown. The major risk stems from commodity prices, which typically decline in global recessions. Since the main exports of Ukraine are commodities, Ukraine may lose a sizable share of its export revenues. Sharp deterioration in terms of trade may also trigger capital flight, amplifying depreciation pressure on the currency and potentially destabilizing the financial system. The central bank should be ready to promptly respond to these risks with a pre-designed policy package. In case of terms of trade shock, the hryvnia should be allowed to depreciate to absorb the shock. Attempts to defend the hryvnia would be a waste of foreign reserves and would undermine the credibility of the central bank’s commitment to the flexible exchange rate regime and thus the inflation targeting framework. Hryvnia depreciation should be accompanied by monetary policy tightening to curb inflation expectations. In case of capital outflows endangering financial system and causing currency overshooting, the NBU should be ready to reintroduce capital controls.

Another risk stems from the volatile global investor mood towards emerging markets. Global investors may change their positive attitude towards emerging markets even if there is no immediate problem in Ukraine. In other words, Ukraine may be considered as being in one group with e.g. Argentina. As Ukraine’s integration into the global financial system has been limited so far, negative impact of global risk-off was limited only to government borrowings. However, as Ukraine’s financial markets get better developed and closer integrated into global system (e.g. foreigners invested more than $3 bn in Ukraine local currency government bonds in January-July 2019, 15% of central bank reserves), swings in foreign investor attitude will have a more profound effect on the currency, financial markets and the overall economy requiring proper policy responses.

For a variety of reasons, the government has been running a fiscal deficit. So far, the government used domestic and international borrowing to cover its fiscal deficit. The balance of risks is such that the government is more likely to face larger rather than smaller fiscal deficits in the short run. For example, a sharp output drop as a result of a global recession can seriously reduce the tax revenue of the Ukrainian government. In addition, the government faces large debt amortization in the coming years, while global financial markets may deteriorate to an extent that borrowings will become prohibitively expensive or unavailable. As a result of negative shocks, the government may be limited in its ability to borrow and hence may turn to the central bank to fund its operations. Given the current political arrangement in Ukraine, the central bank may have few tools to resist the pressure from the government. Indeed, apart from appeals to the general public and the international community, the central bank can do very little to dissuade the government from using the printing press (seigniorage) to pay for its expenditures. Because Ukraine has a history of chronically high inflation, dominance of fiscal policy over monetary policy will likely spur inflation expectations, a run on banks and the currency, and ultimately lead to a massive macroeconomic crisis.

If the new government chooses a path of radical reforms (e.g. introduces a market for land), it is possible that Ukraine will attract major inflows of foreign borrowings and direct investment. This may amplify the positive effects of the reforms and may resemble the economic boom of the 2000s before the 2008-2009 Global Financial Crisis. Major inflows of capital can result in a strong appreciation of the hryvnia which can make Ukrainian exporters less competitive. Furthermore, while this appreciation can help with lowering inflation expectations and inflation, large inflows of capital can lead to a credit boom which can make the country vulnerable to a sudden stop in capital flows and hence a credit bust (think about the crisis in Ukraine during the Great Recession and the Global Financial Crisis). In this scenario, the central bank should be vigilant and use its macroprudential tools to ensure that Ukraine avoids a damaging credit cycle.

Given the internal and external economic challenges for Ukraine, it is vital that the National Bank of Ukraine preserves its independence from political pressures, actively monitors the macroeconomic conditions, and is ready to deploy a broad spectrum of tools to deliver its main policy objective – low and stable inflation.