Despite the bitter scent of renewed political bickering, the failed NCM has helped to avoid an even greater disaster (early elections would not only take a lot of precious time, but could give rise to populist politics and endanger the success of reforms). Still, the coalition parties have to avoid the political stalemate by quickly reaching agreement over changes in the government and accelerating the reforms. Hopefully, this will be done, given the pressure of domestic audience and international partners. The memories about the 2005 post-Maidan political fiasco and the second anniversary of Euromaidan sacrifices should also help.

On February, 16 Ukrainian Government survived the No Confidence Motion (NCM) with only 194 votes “For” (no less than 226 were needed), against the expectations of the public reinforced by the President’s earlier call for the resignation of the Cabinet of Ministers and the Prosecutor General, Viktor Shokin. The failure to oust the government has caused bitter mutual accusations between and within the governing parliamentary factions and ended in two parties (“Samopomich” and “Batkivshchyna”) leaving the parliamentary coalition. Some MPs argued that the President did not really intend to dismiss the Government, hence, the voting was only a cover-up of a [secret] deal between the President and the Prime Minister, their parties and allies.

Surprisingly, even in advanced parliamentary democracies, no-confidence motions (NCMs) result in the termination of government only in approximately 5% of cases. This observation is presented in the study of Laron K. Williams (2011) which analyses the data of 20 advanced democracies from 1960 to 2008 to explain the motivation for proposing a NCM even if the positive outcome is so unlikely. Laron Williams concludes that no-confidence motions result in, and hence are motivated by, the increase of voters’ share of the opposition parties that propose the motion, while decreasing the electoral support of the governing parties.

However, in Ukraine the electoral support of the Prime Minister’s party is so low that even some coalition member parties think that they can win more parliamentary seats in case of early elections. Therefore, in contrast to the majority of cases studied by Laron K. Williams, it were not the opposition parties who called for NCM, but members of the governing coalition – BPP (the president’s party), Samopomich and Batkivshchyna. However, the BPP did not provide enough votes for the NCM despite all the rhetorics of the President on the same day. While this may be the result of lack of coordination within the BPP, it is possible that it was a deliberate move to push through the renegotiation of the composition and the program of the government on favourable (to BPP) terms without triggering a major political crisis and/or early parliamentary elections. Below we elaborate on the nature of political crisis that had led to NCM and consider some possible scenarios for the future.

Underlying Reasons for the Political Crisis

Pros and Cons for Ukraine of the failed NCM

Con. The current situation when the government has lost support of the parliament is hardly conducive to passing the laws necessary for the reforms. A political stalemate may take a lot of time to be resolved and may slow down the reforms, thus putting at risk the economic recovery of Ukraine and causing additional hardship to its people.

Con. Ukraine has lost a chance – at least for a half of the year – to remove one of the top-level politicians whom people don`t trust. However, as it was outlined in the beginning, the chance of doing this was very small. Besides, the alternative would not necessarily be better than the current PM.

Con. There is a high risk that coalition will revisit the issue of dismissing the government in the near future. Moreover, the government action plan was not approved (see the graph below). Therefore, the incentives for the government to put much effort into the reform, especially long-term ones, are severely undermined.

Pro. The country reduced the risk that reforms would be put on hold for at least six months (in case of early elections) or rolled back (if current opposition or populists were elected). This should help implement some of the reforms that are already under way.

Pro. Changes in the composition of the government (without its resignation) and the discussion around it might give a new impetus to the implementation of reforms. Keeping successful and removing unsuccessful officials from their posts could signal that inefficiency and slow pace of reforms in certain areas are not going to be tolerated. However, for any positive effect to take place, the decisions should be transparent and based on objective criteria.

The failed No Confidence Motion is neither a unique occurrence for Ukraine nor a catastrophe. Such a scenario has been played out in many other countries. In Ukraine, we observe not only the political struggle and negotiations between major political parties, but also an attempt of a minority coalition parties to strengthen their voice and increase the share and loyalty of electorate by speaking openly against the governing parties.

Despite the bitter scent of renewed political bickering, the failed NCM has helped to avoid an even greater disaster (early elections would not only take a lot of precious time, but could give rise to populist politics and endanger the success of reforms). Still, the coalition parties have to avoid the political stalemate by quickly reaching agreement over changes in the government and accelerating the reforms. Hopefully, this will be done, given the pressure of domestic audience and international partners. The memories about the 2005 post-Maidan political fiasco and the second anniversary of Euromaidan sacrifices should also help.

Such conflicts are likely to happen again if the underlying reasons for political instability are not addressed. The constitutional conflict between the PM and the President, low quality of “old” elites, absence of ideology based parties and imperfect election laws threaten the long-term success of reforms in Ukraine. One of the possible solutions could be constitutional changes developed by an impartial Constitutional Assembly with wide participation of experts and civil activists that would finally answer the question – is Ukraine a parliamentary or a presidential republic, i.e. who is the head of the executive branch – the president or the prime-minister? This would decrease the potential for political infighting and make politicians more accountable to the people by drawing clear responsibility lines within the government. 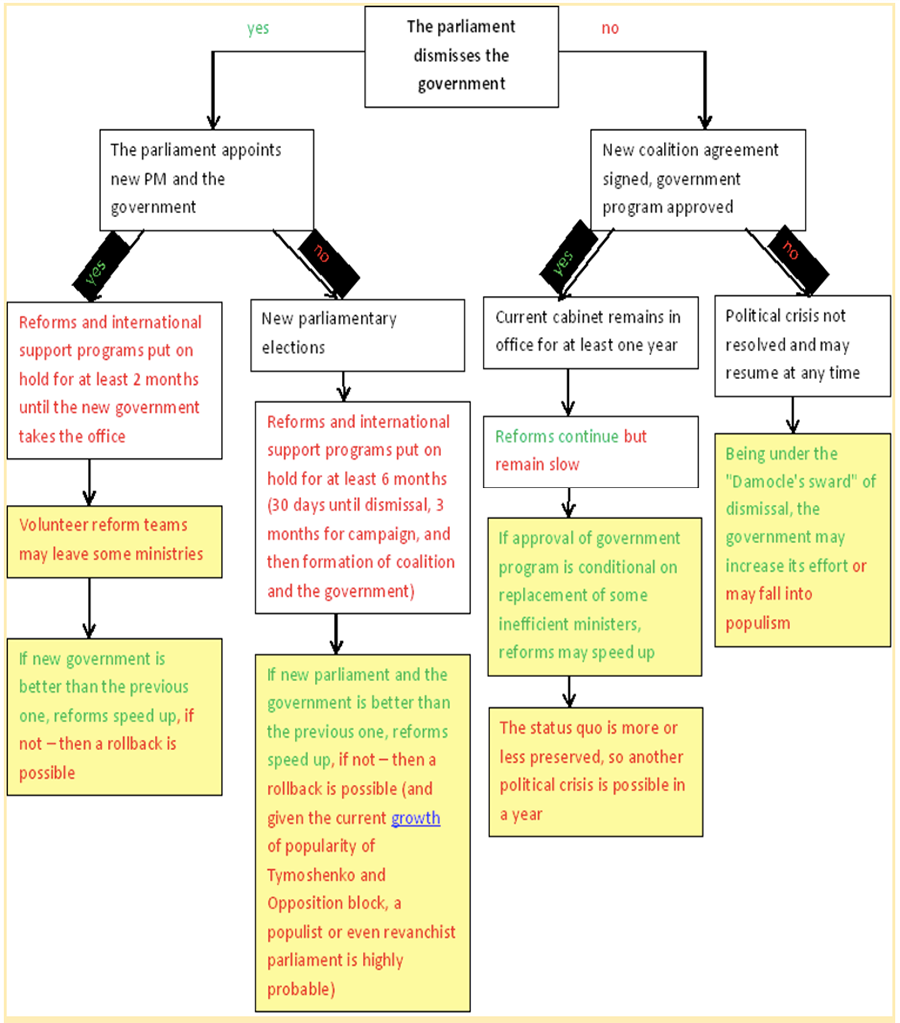 [1] Source: Interview of the Minister of Infrastructure

[4] Samopomich also accuses the Government in manipulation with the numbers about the incomes of the people (13% increase) while the state employees got a 10-40% decrease); Blogs of MPs of Batkivshchyna and BPP parties