Putin, Russians, democracy, and genetic modification… How is Russian “special” democracy different from that in Ukraine

Putin, Russians, democracy, and genetic modification… How is Russian “special” democracy different from that in Ukraine

Recently, the Kremlin declared that Russia would never adopt the Western block’s ideas about democracy. Instead, its leaders claimed that their population had developed their own “gene of democracy” that implies a different perception of the democratic process and, of course, a “better” vision of how democracy should function. This article explores this issue by juxtaposing the understanding of Ukrainians and Russians of what it means to be a democratic country.

From the onset of the transition in 1991, Ukraine started to show a substantial divergence from Russia in its political visions and institutions (figure 1). With time, the desire to move to a “western” type of development has been growing stronger among Ukrainians. The majority of the population adopted more pro-democratic attitudes and values. The democratic process was unfolding in Ukraine following the conventional principles that theory defines as critical foundations of democracy – free and fair elections, plurality of opinions, freedom of speech, etc. When the government tried to rig elections in 2004, Ukrainians protected their choice with mass street protests known as Orange Revolution.

At the same time, after a short period of relative freedom in the early 1990s, Russia went back to a more authoritarian way of governance. Putin’s continuous rule evolved into a new regime, presented as democratic but founded on somewhat “specific” visions and understandings of democracy. The incumbent power conceptualized these as their own Russian “gene of democracy.”

This analysis examines what the Russian “gene of democracy” could potentially mean. What kind of values, visions, and behavioral norms is the Russian understanding of democracy based on? And finally, how different is Ukrainian democracy from Russian one? To answer these questions, I use the World Values Survey conducted in Ukraine and Russia in 2011. The sample includes 1500 respondents for Ukraine and 2500 respondents for Russia. The 2011 wave appeared to contain the largest number of democracy-related variables. Another reason for choosing this early period is to exclude the effects of the war in Ukraine. The war probably consolidated Ukrainian society and significantly strengthened Ukrainians’ aspiration for democracy in their country. The set of questions selected for the analysis and the percentage of population that provided positive responses to them are summarized in Table 1 and visualized in Figure 2.

In 2011, very similar shares of Russians and Ukrainians believed that a political system should be democratic. The same is true for both 2006 and 2017-2020 waves of the survey (Figure 1). In contrast, almost twice as many Ukarinians (80% vs 45% of Russians) agreed with this statement in 1995-1996. Thus, it is perhaps the different understanding of democracy that makes the two countries so different. Let’s have a closer look at the data.

Figure 1. Trends in populations* support for democracy as the foundation of a good political system (Ukraine vs Russia) 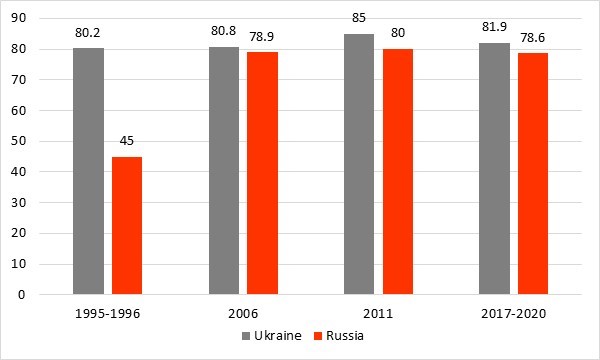 * Both countries participated in earlier and later waves of the World Values Survey. Nonetheless, comparative analysis across waves is impossible since the selected questions were either asked in one wave or were included in another wave only by one country. The 2011 wave was the most informative about democracy-oriented attitudes; the 2020 wave has twice fewer questions.

Similar (and quite high) shares of respondents in both countries believed that people should elect their leader or wanted a strong leader (see Figure 2). At the same time, a much higher percentage of Russians claimed that people should obey their leader and have respect for authority (52% and 62% respectively compared to 38% and 49% for Ukraine). Thus, despite proclaiming the importance of democracy, Russians were much more inclined to have a ‘Tsar’ rather than to actually live in a democracy.

The distinction becomes much more visible when it comes to practice - much higher shares of Ukrainians participated in elections as well as in such inter-electoral democratic activities as demonstrations, strikes, boycotts or signing petitions.

The beliefs of Ukrianians are also much more compatible with democracy: a greater number of them, as compared to Russians, felt members of their communities, described themselves as citizens of the world or autonomous individuals. More Ukrainians than Russians believed that freedom of speech is important (perhaps this explains their higher trust to the media) and that the government should primarily care for the economy. In contrast, almost twice as many Russians (31% vs 15% of Ukrainians) declared that the government should primarily care about the army (this view, as well as trust to the army, has changed since the start of the war in 2014). Many more Russians - 60% vs 50% of Ukrainians - viewed men as better leaders than women (again, recently Ukraine has made a big step towards gender equality).

Along with sexism, Russian “special” democracy is associated with intolerance for other nationalities. Thus, only 43% of Russians trusted people of other nations compared to 54% of Ukrainians, and racist behavior was observed in Russia much more often than in Ukraine.

Russia’s aspiration for a ‘strong hand’ may partially be explained by the prevalence of these ‘traditional’ views. And some part of it is perhaps attributable to the higher level of crime. Thus, instances of drug sales, alcohol consumption in the streets and robberies were more common in Russia than in Ukraine, despite more intense police involvement (13% of Russians and only 8% of Ukrainians report frequent police interference in the streets). These results provide some support for the anecdotal evidence that the police in Russia mostly cares about dissolving street protests than about protecting citizens from crime. In recent years this bias has taken extreme forms of imprisonment for ‘likes’ or reposts and jailing for blank sheets of paper.

In summary, Russia’s “special democracy” is in fact a military dictatorship. It had these features for a long time - already in 2011 (and perhaps even earlier). Russian people have been much less politically active, had a much lower feeling of belonging to their community and to the world. Compared to Ukrainians, a lower share viewed themselves as autonomous individuals. At the same time, their aspirations for a “strong hand” and strong army, despite recognizing the need for democracy, were much higher than those of Ukrainians.

This suggests that Russia’s “special operation” to impose their “democracy” on Ukrainian society is unlikely to succeed. Such attempts will only cause enormous resistance in Ukraine since Russian views, understandings and values are not democratic and contrast those of Ukrainians.

Table 1. Percentage of respondents who answered positively to the selected question, by country.