Since 2015, the NBU has been pursuing the inflation targeting policy, which means that its primary goal is low and stable inflation. While essential for long-term investment and sustainable growth, in the short term this policy is costly. We show that an increase in the NBU key rate lowers inflation less than GDP. Thus not only the central bank but also the government should be aware that the social cost of taming inflation is high and thus consider inflationary impact when designing its policies.

The primary goal of the NBU is to maintain low and stable inflation. The idea behind this goal is to create a market environment where people do not incorporate high inflation risks into their borrowing, investments, and saving decisions. A reasonable and useful objective for Ukraine, a country with  investment to GDP ratio at the bottom 10th percentile of the world distribution.

The benefits of stable inflation are evident. Under such conditions, firms are more confident and optimistic about their investments. People are willing to invest in projects with a longer pay-back period and consider larger investments. This leads to an increase in productive capacities and, hence, higher rates of economic growth in the long run. The NBU is not the only central bank that recognizes the benefits of low inflation. In fact, many central banks have made low and stable inflation their primary goal, including the Federal Reserve and the European Central Bank.

Inflation was always at the center of political discussion in Ukraine — starting with the record hyperinflation in the 1990s, the demand-driven inflation in the 2000s, and culminating with the crisis in 2014-2015. However, since 2015, the NBU has introduced inflation targeting. This implies three main policy changes. First, since that time the Central Bank announces its inflation target and commits to reach it. Second, the exchange rate is flexible. Finally, macroprudential policies for  the lending market have substantially tightened. The latter resulted in a major shift in the banking system. More than 50% of the banks exited the market. In particular, 99 banks out of 180 were found to be insolvent or liquidated by the NBU. These policies allowed the NBU to stabilize  inflation near its target by 2019.

Unfortunately, in 2020 NBU faced a challenge never seen before. The COVID-19 crisis will have lasting consequences both for the world economy and for Ukraine. New waves of the pandemic and constantly evolving strains of the coronavirus force governments to impose quarantine restrictions. Even though businesses and people have found ways to adapt to the new reality, the risk of high inflation is mounting. In 2021, Ukraine’s economy is expected to rebound, and this creates inflationary pressure that needs to be addressed by the NBU (in May and June 2021 inflation was 9.5% yoy). The way NBU approaches this problem is crucial. A too moderate response will not restrain inflation enough to meet the target while a too harsh reaction will put unnecessary pressure on business activity and sweep away some part of the very needed recovery.

There are three main channels through which NBU affects the economy: interest rate channel, credit channel, and exchange rate channel. The first one is the most straightforward. When NBU finds that inflation is about to get out of hand and rise above the target level, it increases the discount rate. This leads to an increase in the interest rates on loans and deposits. When faced with these changes, businesses and households decrease their investments and consumption. This cools down the economy, reducing inflation  to the desired level. Thus while decreasing inflation, the NBU also decreases output.

The credit channel functions through the developments in the premium banks charge for their services. In the case of contractionary monetary policy, banks expect the deterioration of their clients’ credibility and, hence, increase the cost of credit. Lastly, monetary policy affects the exchange rate by stimulating inflows or outflows of foreign investments. The developments in the exchange rate directly influence inflation by changing the prices for imported/exported goods and services. These three channels function simultaneously, so when conducting monetary policy NBU should take into account all of them. A challenging task for sure, especially when faced with a one in a century pandemic.

So what is the cost of containing inflation by the NBU?

In a research paper, we examine  the first two channels of disinflation discussed above – the interest rate channel and the credit channel. We use the monthly data on real GDP (proxied by industrial production), CPI, the volume of outstanding bank loans to firms and households, average interest rates on new bank loans, the monetary base, and average overnight interest rates.

We show that a 1 p.p. increase in the discount rate decreases inflation by 0.6 p.p. and reduces the GDP growth by 0.75 p.p. In other words the sacrifice ratio is 0.75/0.6=1.25: for every percentage point decrease in inflation we need to reduce GDP by 1.25 percentage points. Moreover, we show that monetary policy decisions affect the GDP and CPI after at least 5 months. The effect becomes statistically significant after half a year for the GDP and after 14 months for the CPI. The responses grow in magnitude until the 11th and 24th months respectively. After that, they gradually fade out but remain statistically significant even after three years (figure 1). To put it into context, the most recent increase of the key policy rate in June 2021 is expected to have an impact on the economy no sooner than in November this year. And the full effect is expected to be realized in May 2022 for GDP and in June 2023 for CPI but of course there is some uncertainty of when the maximum effects will be achieved. 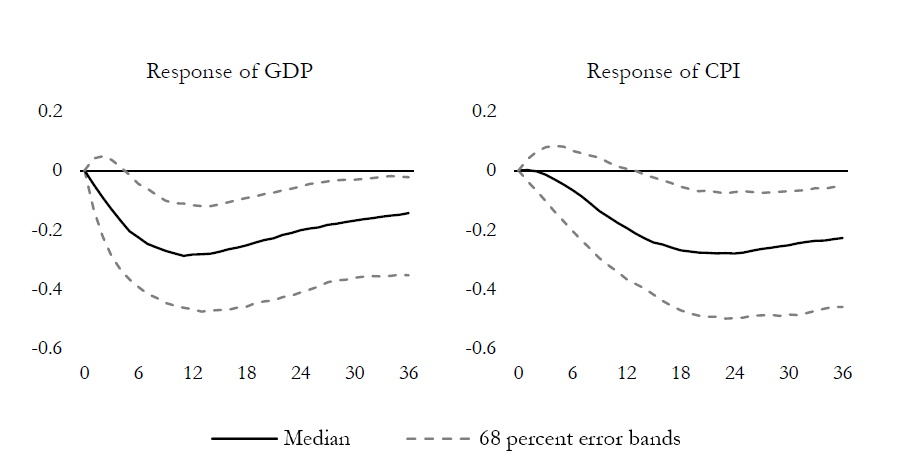 We also show that the credit channel functions in Ukraine. In response to a policy rate hike, banks reduce loan supply to riskier clients first, and that reduction in loans is larger in magnitude compared to less risky ones (figure 2). Also, we show that banks reduce the supply of loans more aggressively compared to the decrease in their liquid assets in response to contractionary monetary policy. This finding supports the idea that in the face of macroprudential requirements banks cannot sell their liquid assets quickly and, instead, they constrain lending. 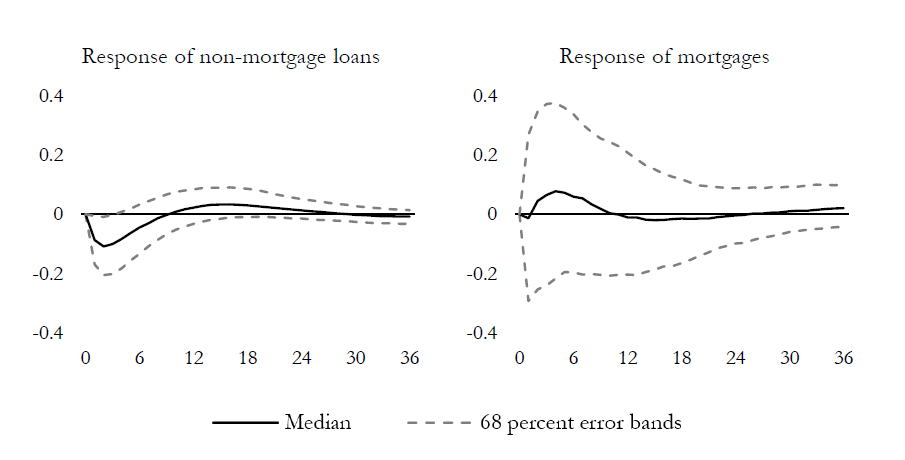 We show that containing inflation in Ukraine is costly: for one percentage point decrease in inflation, we have to sacrifice more than one percentage point of GDP growth. Thus, not only should the NBU be careful in implementing its monetary policy but also the government should consider the inflationary impact of its policies which may trigger a contractionary response from the NBU.