Risks Have Caught Up With the Budget. Main Reasons Behind the Failure to Execute the 2019 Buget | VoxUkraine

Risks Have Caught Up With the Budget. Main Reasons Behind the Failure to Execute the 2019 Buget

State budget-2020 had collided with the harsh reality. Permanent failure to comply with the estimates from the beginning of the year ended with budget adjustment. In early November, an updated version of the budget has entered into force. VoxUkraine found out whether the budget became more realistic and what would affect its performance for the year.

Failure to collect the revenues

Since the beginning of the year, the budget has not been implemented properly in either revenue or expenditure. In the summer, the situation became so dire the NBU even started to discuss the possible sequestration.

Fig. 1 Revenues of the General Fund of the State Budget in January-September 2019 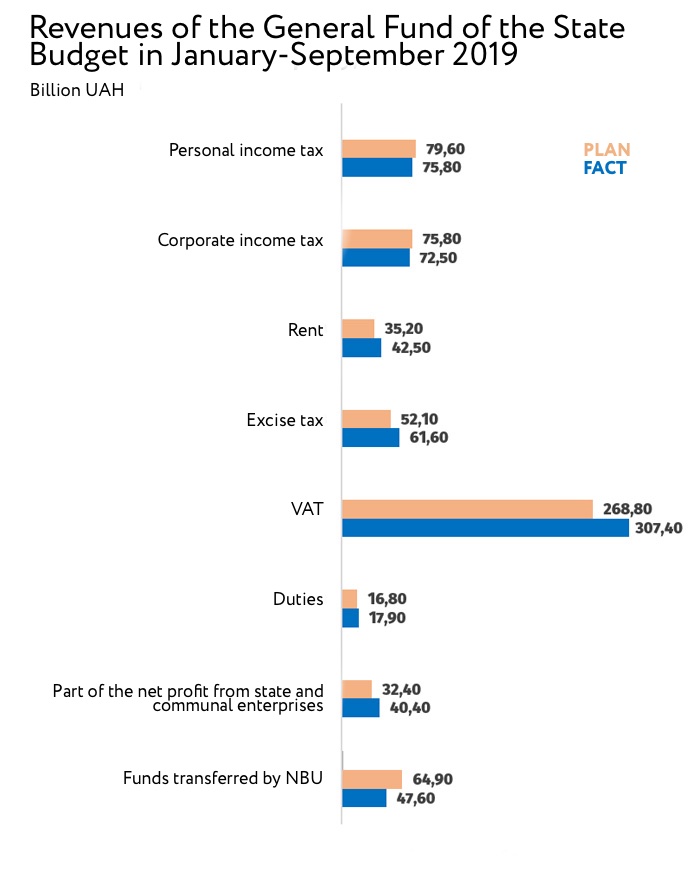 According to the Ministry of Finance, the reasons for failure to implement the budget have remained since the previous periods, even though some new factors are also in play.

The internal VAT revenue plan is not implemented because of the large amount of VAT refunds to exporters.

The low income from rent is explained by the overpayment of Ukrgazvydobuvannya in the amount of UAH 0.8 billion last year. The overpayment was due to the subsidy payments.

First, tax relief for imports of solar panels and windmills, which have been in force since the beginning of the year, continues to be levied on import VAT. According to official data, monthly shortfalls amount to about UAH 0.6 billion.

Second, the volume of customs clearance of imported gas decreased. Since April 2019, Naftogaz has been using the customs warehouse regime, which allows the natural gas to be pumped and stored in underground storage facilities without payment of customs duties. According to the Ministry of Finance, Naftogaz of Ukraine’s VAT on natural gas imports for January-August 2019 decreased by UAH 6.4 billion to UAH 1.7 billion compared to the same period last year.

Thirdly, the lower price of imported gas and the change in the formula for determining the price of natural gas for domestic consumers and producers of heat have also been negatively affected by VAT.

Fourth, the exchange rate factor continues to play its part. The state budget is estimated at the average rate of 28.2 UAH/USD, while in January-September it amounted to 26.4 UAH/USD.

Excise duties remain a weak link in budget revenues due to the pre-formed stocks of tobacco companies. During the year, the companies sell off their remnants and reduce the production of cigarettes, which hurts the budget.

In addition, in recent months, the state’s relations with tobacco companies have deteriorated sharply.

On October 3, MPs from the Servant of the People’s Party Oleksandr Dubinsky and Oleksandr Yurchenko amended  the draft law #1049, which redistributed the trade margin between tobacco market participants.

After meeting with tobacco companies Oleksiy Honcharuk said that everything was solved, a solution was found and it should soon come into force. That hasn’t happened yet, but the tension has been reduced somewhat. The companies postponed their plans to close factories in Ukraine and are waiting for the further developments.

Not all planned expenditures have become a reality

During the year, expenditures undergo some filtering: protected — almost fully financed, development expenditures — given the availability of funds in the budget, the level of project readiness and other factors. There are also costs that are not funded at all or are minimally funded. There may be several reasons — the low priority of such programs for the government, their inefficiency, less demand for these funds from the recipients (for example, agricultural business support programs). Funds from such programs are often redistributed to more urgent needs.

The 2019 budget has a number of programs that have not been funded since the beginning of the year.

One is public administration reform program. At first it was planned to spend UAH 1.2 billion, then the plans were reduced to UAH 0.6 billion. However, no money has been allocated yet. The Presidential Foundation for Youth Support did not work either. UAH 1.2 billion has not been spent on the Energy Efficiency Fund either.

Out of programs for state support for cinematography, ammunition disposal, conservation activities less than 20% were funded. (Fig. 2)

Fig. 2. Expenditure of the General Fund of the State Budget in January-September 2019, billion UAH

In total, UAH 759 billion spent since the beginning of the year has been allocated by the state. (Fig. 3) 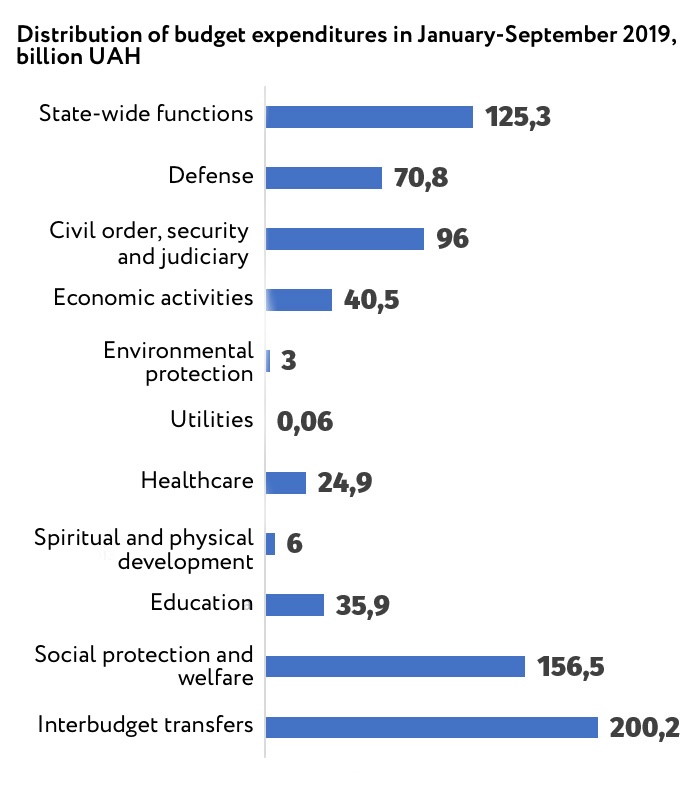 How did the budget change

In the fall, the need for budget revision became even more pressing.

On October 31, the government amended the budget. Revenues and expenses decreased by UAH 19 billion — to UAH 1,007 trillion and 1,093 trillion UAH, respectively. The deficit grew by UAH 1.1 billion to UAH 91.1 billion.

There was a redistribution of funds within the budget.

In parallel, funding of the President’s Fund for the Support of Youth Educational and Scientific Programs decreased by UAH 0.8 billion. A stronger hryvnia exchange rate allowed the government to revise the government debt service plan and cut it by UAH 21.6 billion. Agricultural sector support expenditures were also reduced due to incomplete sampling of funds.

These changes updated the estimates but did not save the budget from the risk of failure.

What awaits the budget

At the moment, several factors remain that keep the budget under pressure.

The first factor is the hryvnia exchange rate. As the national currency continues to strengthen, the budget keeps losing money on the revenues coming from import taxes. This is in part compensated by the reduction of the expenditures for the state debt servicing, however, the budget is still far from what was planned.

The second factor is the clearance of gas. According to ICU financial analyst Taras Kotovych, the enforcement of import taxes could improve with the onset of customs clearance of Naftogaz from gas stored there. “If it starts clearing the blue fuel, then the tax revenue from the imports may be even better than the adjusted plan, which will improve the budget balance,” Kotovych says. If clearing does not occur, then subsidence may increase.

The third factor is the unresolved situation with tobacco companies. The scandal died down, but did not end — the decision Oleksiy Honcharuk spoke about is yet to become a reality. From the point of view of the law, there are two options: either the MPs will approve the relevant resolution of the Verkhovna Rada, cancel the results of voting and then vote for the unamended draft law, or the president vetoes it. The longer this story is in limbo, the more risks it has to pay excise taxes. In 2018, according to official figures, tobacco companies paid UAH 47 billion in excise taxes. Of course, the closure of factories does not mean that the budget will lose these funds – cigarettes will not disappear, they will just be imported. There will be a replacement of domestic tax revenues from import taxes. The fiscal impact of such a replacement is unknown to date. The transition from domestic production of cigarettes to imports may be accompanied by a drop in excise duties or a failure to pay them.

The fourth factor is economic growth. In the first half of the year GDP growth exceeded all possible expectations and projections and amounted to 4.6%, but in the third quarter economic development slowed to 4.2%. However, compared to the 3% budgeted for the current year, this is also a high figure. And when asked whether it would compensate the aforementioned shortfall from import taxes and excise taxes, World Bank chief economist Anastasia Golovach confidently says, “Yes, it will. In the case of the hryvnia factor, there will be not only a failure to earn revenue but also a reduction in expenses. In addition, better-than-expected economic growth will have a positive impact on personal income tax and income tax.

At the same time, international experts point out that this year’s high GDP growth rate is more a strike of luck than a trend.

“We can say that Ukraine was just lucky. We have record harvests for the second year in a row,. The second important factor is the contribution of the financial factor to the accelerated economic growth. Its a natural phenomenon after the crisis years,” she says. According to the Chairman, we should keep in mind that these trends will not be sustainable in the future as the comparison base will gradually increase. An important driver of GDP growth is the capital expenditures inflow, which is insufficient in Ukraine.