"Russia must protect itself:" a review of pro-russian narratives in the Italian and German media

“Russia must protect itself:” a review of pro-russian narratives in the Italian and German media

“Listen, Russia has never attacked anyone first. Remember history: they wanted to make us a victim, but, fortunately, no one succeeded,” the Kremlin’s spokesman Dmitri Peskov said on February 20, four days before russia mounted a large-scale invasion of Ukraine.

“Russia wages only a defensive war, russia must protect itself” is an old russian propaganda narrative. However, it does not stand the test of fact and scrutiny. Russia has repeatedly attacked its neighbors: Ukraine, Poland, the Baltic states, Georgia, Azerbaijan, Finland, etc., in the last hundred years alone.

In the 21st century, this narrative mainly concerns Russia’s relations with NATO and Ukraine. Kremlin ideologues constantly accuse the West and Ukraine of “provocations,” “preparation for war,” and “neglecting russia’s interests.” On the contrary, russia attributes all of its military activities near the NATO-Ukraine borders to solely peaceful and legitimate goals.

In this article, we will look at the following fake stories within the narrative:

Fake. NATO promised russia it would not expand eastward

One of the false stories underlying Russia’s ultimatum to NATO regarding “security guarantees” is the myth, saying that in the 1980s and 1990s, NATO countries provided clear assurance to russia that it would not expand to the east. Now, the russian authorities believe the West has broken those promises.

In truth, NATO did not make a legal commitment to russia not to expand in Eastern Europe. NATO’s “open door” policy has not changed throughout the organization’s existence.

Russia has sometimes argued that NATO’s non-enlargement eastward is linked to the 1990 German Reunification Treaty. For instance, in his famous Munich speech in 2007, putin referred to the words of the NATO General Secretary in 1990. He had allegedly said that NATO guaranteed non-enlargement outside of German territory.

After checking the original source material and considering these words in context, it turns out that the NATO official meant the non-deployment of NATO troops in East Germany: “We will never be the first to use our weapons. We are prepared for radical disarmament, right down to the minimum level that we must retain to guarantee our security. This will also be true of a united Germany in NATO. The very fact that we are ready not to deploy NATO troops beyond the territory of the Federal Republic gives the Soviet Union firm security guarantees. Moreover, we could conceive of a transitional period during which a reduced number of Soviet forces could remain stationed in the present-day GDR. This will meet Soviet concerns about not changing the overall East-West strategic balance. Soviet politicians are wrong to claim that German membership in NATO will lead to instability. The opposite is true. Europe, including the Soviet Union, would gain stability. It would also gain a genuine partner in the West ready to cooperate.”

In addition, NATO membership for Eastern European countries could not be on the agenda because the Warsaw Pact (Soviet military-political bloc) existed until July 1991, i.e., after German reunification.

The Treaty on the Final Settlement with Respect to Germany (1990) does not contain NATO’s non-enlargement commitments in Eastern Europe. The only provision that could be interpreted as non-expansion eastward is the clause regarding the non-deployment of foreign troops and nuclear weapons in East Germany. After the break-up of the Soviet Union, Mikhail Gorbachev also confirmed that NATO had not committed to changing its enlargement policy.

The NATO-Russia Founding Act (1997) that outlined principles for relations between the countries did not mention non-enlargement either. There are no similar commitments in subsequent documents relating to Russia-NATO relations.

Besides the myth of NATO’s non-expansion to the east, pro-russian media often argue that NATO is pursuing an aggressive policy of expansion and approaching Russia’s borders, thus provoking conflict:

NATO is a defense alliance not aimed at committing aggression against other nations. Article 5 of the North Atlantic Treaty establishes principles for collective security: an armed attack against one member shall be considered an attack against them all. Central and Eastern European countries have voluntarily chosen the path of Euro-Atlantic integration because they consider NATO an effective security instrument.

Despite the alliance’s enlargement, NATO does not encircle russia. Russia has borders with 14 countries, and only five of them are NATO members. Only 6% of russia’s land borders are with NATO countries. 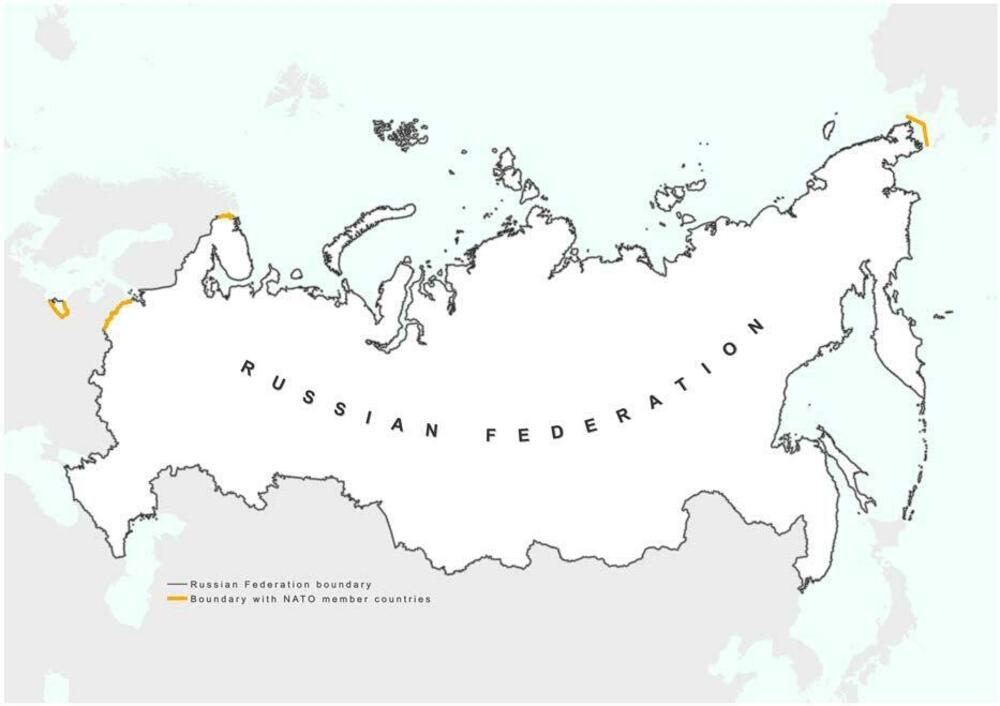 NATO has not threatened russia. On the contrary, for many years, the alliance has offered cooperation to russia. Back in 2000-2010, the parties managed to cooperate in the fight against drug trafficking, international terrorism, and in the field of emergency response.

However, russia has undermined the alliance’s confidence at least twice: by russian aggression against Georgia in 2008 and against Ukraine in 2014. After the invasion of Ukraine, NATO countries were forced to strengthen their forces in Eastern Europe. In response to russia’s preparations for an invasion of Ukraine in January 2022, NATO sent even more troops  to the east.

So NATO is not going to attack russia but strengthen its own defense capabilities in response to russia’s aggressive actions. The organization is ready to resume dialog with Russia if it begins to comply with international law.

Fake / Manipulation. NATO is increasing its presence in Ukraine, posing a threat to russia

Even non-NATO Ukraine is a matter of serious concern to russia. According to pro-russian media, any cooperation between the alliance and Ukraine is a threat to russia’s interests: “Ukraine continues to increase the military presence of its closest NATO partners. According to the Ukrainian military, this must strengthen security in the area. For russia, however, this is another sign of the creeping inclusion of Ukraine into NATO plans.” (“Die Ukraine stockt die militärische Präsenz ihrer engsten NATO-Partner weiter auf. Laut dem ukrainischen Militär müsse das die Sicherheit in der Region stärken. Für Russland ist dies jedoch ein weiteres Zeichen für eine schleichende Inklusion der Ukraine in die NATO-Pläne.”)

As in the previous case, russian propaganda outlets are breaking the causal link. NATO-Ukraine relations and Ukrainians’ support for the Euro-Atlantic course reached new highs only after 2014, the year of russia’s aggression in Crimea and Donbas. Ukraine sees NATO as a means of preventing russia’s further aggressive actions.

However, no one has turned Ukraine into a “NATO base” yet. There are no NATO troops or military infrastructure on Ukraine’s territory. Military cooperation between Ukraine and NATO is limited to assisting with Ukrainian reforms, consultations, exchanging experiences among the military, and participation of Ukraine’s armed forces units in NATO operations or exercises.

Supplying arms to Ukraine is not done at the NATO level but at the level of individual countries. Ukraine receives particularly significant assistance from the United States and the United Kingdom. These countries began to supply lethal weapons to Ukraine precisely against the backdrop of Russian aggression. In other words, Russia forced Western governments to strengthen Ukraine’s defense capabilities.

Russian-speaking Ukrainians or ethnic Russians have never been discriminated against. Ukraine equally protects the rights of all citizens and national minorities. Under the guise of “protecting russians and russian-speaking Ukrainians,” russia committed aggression against Ukraine in Crimea and Donbas. As a result, the people russia allegedly cared for have become victims of the conflict, robbed of the opportunity to live a peaceful, secure life. The occupying authorities regularly violate human rights in these territories by resorting to repression.

Russia cited the “russophobic” Revolution of Dignity as the official reason for the aggression. However, it is now known that russia had been planning an attack in advance, even during pro-russian rule in Ukraine.

Before the large-scale invasion of Ukraine, pro-russian media had disseminated fake news saying Russia was not going to commit aggression and it was only conducting scheduled military exercises. In some cases, propaganda outlets said the troops were at places of their permanent deployment. “The West accuses Russia of concentrating 100,000 troops “on the border with Ukraine.” Apparently, including units 300 to 400 kilometers away from the Ukrainian border at the place of their permanent deployment.” (“Der Westen wirft Russland vor, Truppen mit einer Stärke von etwa 100.000 Mann “an der Grenze zur Ukraine” zusammengezogen zu haben. Dabei werden in dieser Zahl offenkundig auch Verbände berücksichtigt, die sich in 300 bis 400 Kilometern Entfernung von der ukrainischen Grenze am Ort ihrer regulären Stationierung befinden.”)

U.S. intelligence and independent investigators like Center for Information Resilience and Conflict Intelligence Team warned of the dangerous concentration of Russian troops near the Ukrainian border in late 2021 and early 2022. Evidence of preparations was the Kremlin’s intercepted intelligence plans, a continual build-up of troops at the border with additional personnel and equipment, and the troops’ gradually getting closer to Ukraine’s borders. Troops were concentrated not only in places of permanent deployment but also directly near the border, less than 50 km from Ukraine’s territory. Meanwhile, russian and Belarusian rhetoric had become increasingly aggressive toward Ukraine.

Despite evidence of preparations for a large-scale invasion, Russia denied any such plans. Moreover, even after February 24, 2022, high-ranking Russian officials said Russia had not attacked Ukraine. This lie is a logical continuation of the “russia does not wage an offensive war, it only protects itself” narrative.

All fake stories within the narrative of “protecting Russia’s interests” have concerned security and defense. Russia has a peculiar view of European security: according to its representatives, none of the neighboring countries has the right to strengthen their defense capabilities, choose the Euro-Atlantic course of development, while Russia can and must ensure its security interests at all costs, including war, military provocations, and threats. These misconceptions found reflection in several disinformation pieces circulating in the Italian and German media.