Empirical evidence and fresh insights from behavioral economics suggest that smart fiscal decentralization naturally steers national economies toward less corruption and more sustainable economic growth. Some examples from Europe help to understand what a smart design for decentralization might look like.

It is puzzling and frustrating that the economy of Ukraine, blessed by excellently educated and hard-working people, fertile soil and raw materials, has for two decades failed to grow sustainably.

In the European Union we face a similar puzzle: Greece. Greece disposes of a well-educated population, a tradition of a market economy and – since 1980 – grants and subsidies from the European Union for a total of around 200 billion Euros. No other Member State of the European Union has been so massively supported to invest into cutting-edge infrastructure. In principle, Greece should be an economic powerhouse. Instead, the country has been in distress since 2008, an outcome which among other factors reveals substantial structural problems.

Several European economies with lower per-capita income than Greece’s were hit much harder initially by the financial crisis in 2008, but recovered much faster, some even without outside support. Lithuania, Latvia, Estonia experienced drops in GDP close to 15%. Also Slovenia, already Member of the Eurozone, was much harder hit by the crisis in 2008/2009 than Greece. Similarly, Finland and Sweden faced an economic depression at the beginning of the nineties. All these countries got back on track by themselves, developing now into innovation economies and leaving other Member States behind (see ranking of EU Member States in 2008 versus 2015).

What makes the difference between these countries and Greece? One explanation that has been offered postulates differences in “mentality”. According to this reasoning, centuries of Ottoman occupation in Greece promoted distrust of the state while eroding belief in the public good, attitudes which became deeply ingrained in citizens’ mind-set and provided fertile soil for corruption and more generally a malfunctioning state to grow.

Put differently, these results showed us that Greeks were in principle willing to commit to and support a functioning state. We were puzzled. Why did they not actively transform their country for the better? In trying to understand this puzzle, we stumbled upon a fiscal-administrative peculiarity which we suggest might go some way toward explaining the difference in performance and institutional quality between Greece and countries like Finland, Sweden, Slovenia and Baltic States.

To explain: Greece is in fiscal and administrative terms an extremely centralized country. Only 0.7% of all tax revenues go to local budget, compared to an average in Europe of 10.6% (see Figure 1, using data from Table B.3.G of “Taxation trends in the European Union“). 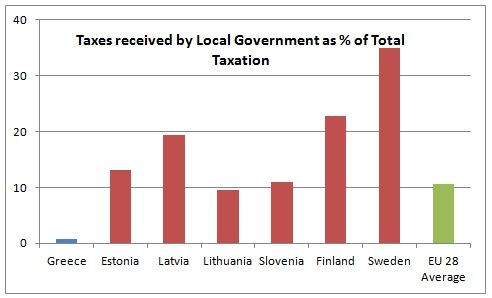 Greek local administration has little – if any – autonomy. Be it spatial planning, or entries of new companies into business registries, or construction permits – everything is administrated opaquely via Athens rather than being dealt with directly at the local level. As a result of this highly centralized fiscal and administrative structure local authorities hardly care about local business, as any tax revenues from local business goes to Athens and will be to the benefit of those municipalities who most successfully lobby for their municipality in the capital. Naturally investing time in helping local business is a bad decision for a municipality leader: She better invests the time in lobbying in Athens herself..

In contrast, the Baltic States, Slovenia, Finland and Sweden are highly decentralised countries. A significant part of tax revenues from local economic activity (like income tax, corporate business tax) goes to local budget and local administrations enjoy a very high degree of autonomy (and consequent responsibility for providing services such as childcare, elementary school, care for the elderly, etc.).

But why should local administrative autonomy and re-assignment of tax revenues from local economic activity be such an important driver of sustainable economic growth and innovation at the national level?

To understand this, one has to consider the nature of human behaviour: We humans tend to live and act in social networks, usually up to a few dozen peers. Within this network humans can easily spot misbehaviour of peers and punish them (be it verbally or physically) accordingly to get them back on track. Local communities are densely intertwined social networks. Even in larger cities almost everybody knows everybody at least via two intermediate friends. In result, information about misbehaviour of one community member can spread quickly and efficiently via gossip. At the same time, “punishment” of misbehaviour is also very cheap: People are aware that they will meet again and again in the streets, so everybody is interested in maintaining a good reputation. Therefore it is often enough to verbally signal some criticism to a misbehaving individual to correct misbehaviour. . These special features of social dynamism in local communities make them function fundamentally differently from societal dynamics at a regional or national level. The more distant, the less peer pressure can function, the more expensive to punish misbehaving individuals/politicians/members of administration. The greater the physical distance, the more collective action is needed to cause change, making it less likely, ceteris paribus, while at the same time it becomes easier for public administration to hide bad behaviour.

In short, a local social system is a very special animal. If the institutional design is set right at the local level, municipalities and cities will naturally drive out corruption within their local administration and strive for improving the local business climate while responsibly and efficiently providing the services which the local electorate demands. And once that is happening in all municipalities and cities, it no longer matters which political party is governing at the national level. The national social system will work, as all local “cells” of the big body nation are working towards economic prosperity.

So what exactly might a good institutional setup look like? Taking into account recent findings on the nature of human cooperation and competition behaviour and comparing across Europe we found that the most successful innovation economies of Europe (Switzerland, Finland, Sweden, Denmark, and Germany among the “old” Member States of the European Union; and Slovenia, and Baltic States Estonia among the “new” Member States of the European Union) share the following institutional features:

If these preconditions are met, the resulting system of incentives can push the national economy towards innovation, stability, and faith into the state and public administration. The behavioural mechanisms at work are quite straightforward:

1) Once local budgets get a share from locally generated income and corporate business tax, it literally pays off for local governments to support local businesses with an effective (corruption-free) administration and to attract new companies with creative ideas: the more business, the more local tax revenues will be generated. Suddenly, even very small enterprises become important for tax revenues and the local budget. Small and medium-sized enterprises (SME), the backbone of innovation-based economies, get support from local administration and will be shielded from attempts to extract bribes. That is why these revenues from local economic activity are so tremendously powerful in motivating public administration to function soundly, transparently and efficiently.

2) At the same time, municipal leaders turn into “Sensors” and “Advocates” of business-friendly policies at the national level. Quietly, and in the background of the big national political scenery, political leaders at the local level will unite across parties to lobby via their party-internal connections for business-friendly regulations and legislation at the national level. Thus, they can counterbalance the tendency for overregulation and economically harmful legislation. In countries like Greece, this counterweight to regulation-friendly national parliaments was and is missing.

3) A fixed formula with objective criteria for the allocation of grants and equalization payments between central, regional and local administration ensures that local leaders do not spend time in the regional/national capital to lobby for grants, as this would be useless. Instead they will use their time to take care for the concerns of the electorate back home.

4) Local entrepreneurs and self-employed individuals, in turn, know that they can only count on support from the local administration, if they pay income and corporate tax to make a contribution to the local budget.

Putting all these behavioural pieces of the puzzle together, one can see how fairly simple institutional design changes can drive a society bottom-up toward better institutional quality – a necessary precondition for innovation economies to flourish.

For Ukraine, the argument presented above implies the following recommendations:

An initial obstacle to this mechanism might be that much income is currently hidden from the state, and as a result many people will be hesitant to ask for good services from local administration in return for taxes they do not pay. But it takes only a few local politicians who nudge people to be honest on their income tax, and credibly promise in return an honest job at making the city a better place to live. A handful of such mayors succeeding in doing so will be enough. With their positive example, change for the better becomes irreversible: competition between local governments to attract businesses from elsewhere will propel even reform-reluctant administrations toward efficient and corruption-free service provision: the faster and more transparent local governance, the sooner new enterprises will settle.