On February 28 ZIK TV channel ran the “Smells like Soros Marathon”. TV hosts, deputies and pseudo-experts have devoted all day to assessing the impact of the American financier on Ukraine. But as always they “went south”.

Members of the OPFL, several representatives of “ Servant of the People’s ”,of “European Solidarity” and, of course, “experts” came to talk about Ukraine’s external governance, friendship with Russia and the economy. However, few of them understood the topics discussed – out of 51 factual statements made during the broadcast, only 6 were correct, the rest were conspiracy theories, baseless accusations, personal thoughts and other “chatter”. And propaganda of course, but  we`ll get to that later.

“Did not even fact-check our broadcast” (c) TV host

In fact, in the extended version, the words of the TV host were related to one of the publications on “Detector Media” and were as follows: “Well, no facts other than evaluative judgments were provided in the published text. They did not even fact-check our broadcast.”

But we intentionally took those words out of context. In order to say now: – Well, we, the VoxCheck team, have fact-checked your broadcast. You will not like the results. 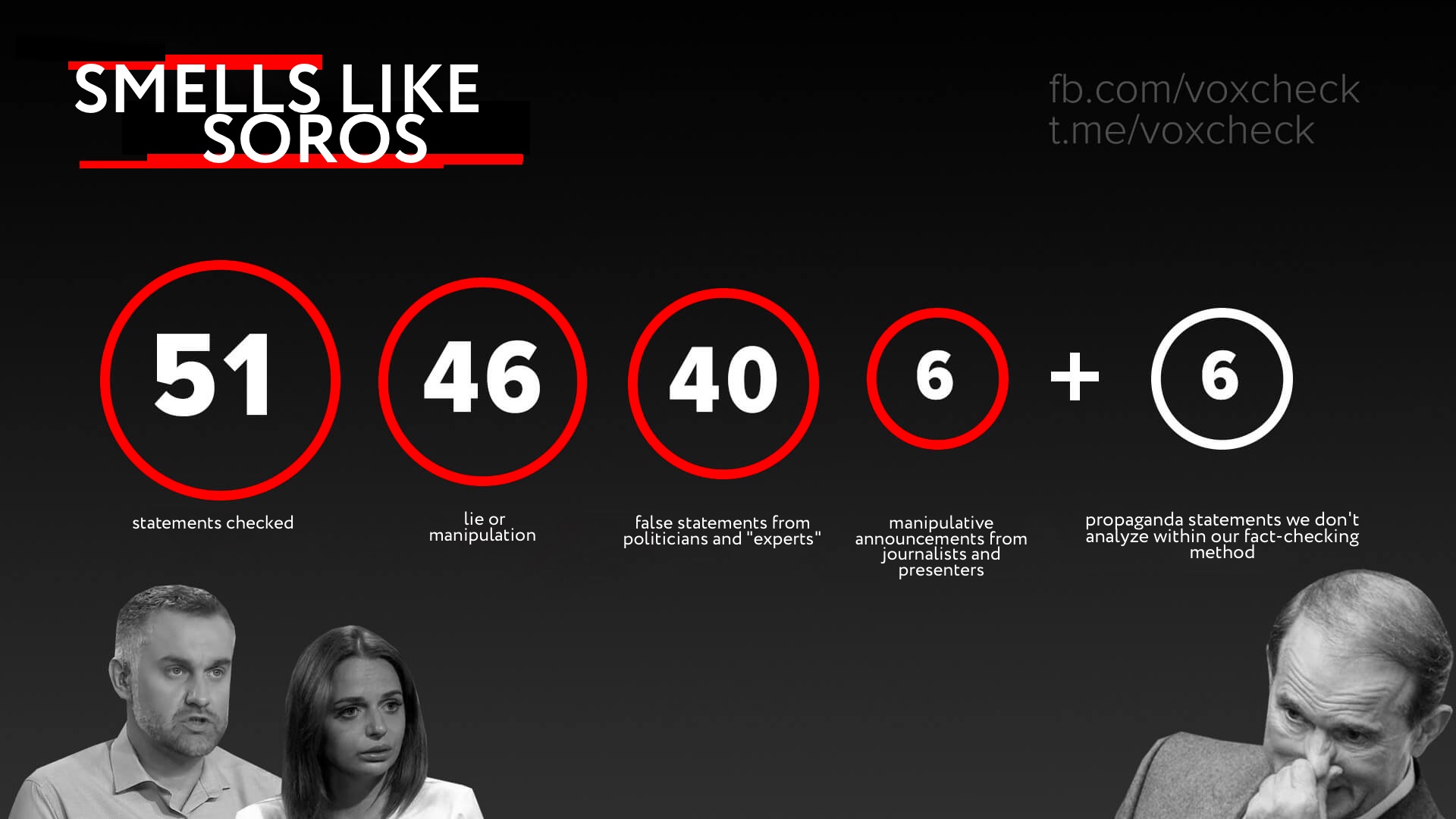 For your convenience, in this article we present the most illustrative examples of non-compliance with standards of journalism, violations of the law, manipulations, “expertise”, lies and propaganda. All fact-checks can be downloaded from this file  or read on Anthology of lies.

Failure to comply with standards of journalism

For his program, ZIK prepared  stories that talked about who George Soros is. In these  stories, they used everything but the facts – from manipulation and judgment to untrue information.

“An attempt to dismiss and reboot the Cabinet is hampered by some secret power. And the explanation for this is the rating of “Top 100 most influential people in Ukraine”. George Soros, the modest philanthropist, came in second in this ranking after President Zelensky ”

We found three ratings with the most influential people in Ukraine.

Two of them have an open and transparent methodology. One does not.

Two of them involve real people. One – includes not only real-life figures but also fictional characters, anonymous bloggers and the phenomenon.

Two of them have high news quality ratings. One is low.

Try to guess what rating you used in the ZIK TV channel’s story. Yes, according to the rating of “Vesti”, the second most influential is George Soros. According to a rating that does not have a transparent methodology, which, as the editorial board notes, was a poll with further changes in the editorial board and which included fictional characters.

In the adequate ratings of the “Focus”  and “Novoe Vremya” magazines  in second place was Andrey Bogdan. Both issues in the anti-rating of   news quality form IMI rank low (ie, news in them is qualitative).

“Truthfulness and Accuracy”, “Editorial honesty and independence”, “Impartiality and diversity of thoughts”. These are not just slogans. These are  editorial values of the BBC. Those values ​​in the light of which the ZIK Editorial Charter  was developed. Those values ​​that they did not comply with.

Violation of the law

Disclaimer. We made a mistake in a previous version of the article. In response to the critiсism from the audience and according to our policy towards mistakes, we have crossed out the wrong text and added the correct check.

In the previous version of the article, it was erroneously stated that the advertisement of the OPFL party on ZIK TV channel was a violation of Articles 68 and 74 of the Law of Ukraine “On Elections of People’s Deputies”. In fact, such advertising is a violation of Article 19 of the Law of Ukraine “On Television and Radio Broadcasting”. This article prohibits both direct and indirect funding of TV channels by political parties.

And here’s what they aired in the commercial break on  ZIK.

The most striking example of the manipulation was the words of a deputy from the Servant of the People Yevheniy Shevchenko.

What are we talking about? Prior to the signing of the Deep and Comprehensive Free Trade Area (DCFTA) between Ukraine and the EU, Ukrainian producers had to pay a fee to sell their goods to Europe. After the signing of the treaty, duty-free quotas were set – a certain amount of goods that can be sold to the EU without paying customs duties. If the quota expires (which in some cases happens quickly), our manufacturers will simply pay the same fees as before the DCFTA.

In other words, after the signing of the agreement, Ukrainians can sell part of their goods to Europe without paying a fee, and the rest with the same fee as before signing. In addition, quotas, that is, non-paying supplies, are steadily increasing because we are a profitable partner for Europe.

It would seem to be a win-win situation. But Yevgeny Shevchenko manipulates and submits information as if they would not allow us to sell our goods.

“An ideology aimed at weakening the Ukrainian state. It all comes down to the fact that you open your own markets for us, you undress completely, and we will not let you there. You will try to sell our goods somewhere in the western markets. Honey, quota for honey, how long does it last, three days? In 3 days Ukraine completes this quota. Then for  next 363 days do watever you want (you cannot do nothing) with  your honey. ”

Volodymyr Katsman, journalist and political expert, frequent guest on ZIK, NewsOne and 112th. Commenting on the privatization of the Dniprovskiy Machine-Building Plant, he stated that 16,000 people worked there, and that plant was privatized for $ 4.5 million.

But it’s like in that anecdote “well not a million, but a thousand, and not in the lottery, but in the cards, and did not win, but lost”: the plant employs not 16 thousand, but 160 people, sold not the whole plant, but 25% +1, not for $ 4.5 million, but for $ 4.5 million. By the way, before the partial privatization, the plant was in a very bad financial state and now it has started bankruptcy procedure.

“Dneprovsky machine-building plant, military enterprise, made  optical circuits for space, younger brother of Yuzhmash in Dnepropetrovsk, the younger brother… 16,000 working people, 16000, this is for a moment 16000 families who received some income from work at this enterprise and so  on, you understand it… 16000! Privatized by our “sorosmen” last year for $ 4.5 million, it is a penny compared to such an enterprise…”

Last year, the privatization process indeed took place at the Dnipro Machine-Building Plant, however, for UAH 4.5 million, they sold a 25% + 1 stake. And it works at the enterprise not 16 thousand, but not more than 160 people160.

That was not true. Everyone who earns (officially) pays taxes. Including NGOs. They pay the PIT, the SUT and the military tax. In addition, they submit tax, financial and statistical reports. All by law.

Andriy Lesik, Head of Kharkiv Branch “Opposition Platform – For Life”. Although other marathon participants also seemed to be nostalgic for trade with Russia, but Lesik exceeded their statements by generally dismissing the fact of Russian aggression in Ukraine. Moreover, he called “heroes” the “Berkut” –    persons involved in criminal cases”  with direct evidence of their involvement in the shooting  of more than 40 protesters during the Revolution of Dignity.

“So that all people who is wathching us would   know that “Berkut” is a hero. People need to know the truth. ”

Yemets (referring to Lesik): “Now, do you say that Russia is our aggressor?”

Lesik: “No, I did not recognize Russia as an aggressor. Deputies voted, I went out in public and said, “Russia is a brotherly people.” I thought so in 2015 and now I think. ”

This block is not typical for VoxCheck, because we did not check  politician’s statement here.

But we turned to  Lawyer Olga Veretilnik (Law Firm “Miller”) for information on whether these and similar statements on television could be classified as treason.

State treason as a crime under Article 111 of the Criminal Code of Ukraine has the following forms:

One of the objects of this crime is the information security of Ukraine.

Theoretically, Andriy Lesik’s statements have the hallmarks of this third form of treason. According to the commentary to this article, providing assistance to a foreign country, a foreign organization or their representatives in carrying out subversive activities may take the form of assistance in organizing information expansion by other states.

The crime is committed intentionally, that is, the person must understand what he is doing and intend to promote subversive activity against Ukraine.

Unfortunately, mere chatter does not count.

Theoretically, the systematic dissemination of such utterances that you have stated may be disruptive, but this requires intent.

But from a practical point of view, it is impossible to hold responsible for these statements, except if it is to prove intent on subversive activity. Otherwise, it may rather be interpreted as an encroachment on free speech. The border is quite thin.

According to the decisions of courts on treason over the past year – though statements  were written about the dissemination of some information –  mostly held accountable  for the transfer of information to the representatives of the Russian Federation: the number of troops, repair, modernization of equipment and the like.