Social Stress: the Consequences and Lessons of Quarantine | VoxUkraine

The COVID-19 pandemic and  the quarantine restrictions related to it have become a major challenge for people. One of the important social and psychological consequences is stress and a growing fear, both for one’s life and health and for economic well-being. Our study shows that the fear of contracting disease in April was much lower than in January-March. In September, the fear of losing a job outweighed the fear of contracting the coronavirus. Let us try to see who in Ukraine is most prone to fear, and why and how these people could be helped.

To study the fears of the country’s population, we use the data from the eight waves of the Gradus poll on the impact of the COVID-19 pandemic on the lives of Ukrainians. In addition to answering questions about the perception of events relating to coronavirus, these polls contain a wide range of social and economic information about the respondents: gender, age, marital status, education, employment and profession, financial status, region and size of settlement, etc. As a starting point, we use the poll data from January 31, then look into the three waves in March (before and after quarantine), the two waves in April, one at the end of April and the beginning of May, and one more wave in May (Fig. 1).

Figure 1. Chronology of Gradus poll waves used in the study

Each poll is marked with a circle with the respective number. The quarantine period (from March 12) is highlighted in yellow

Between 600 and 1,200 respondents took part in each wave. In the Appendix below is a description of the sample according to the respondents’ main characteristics.

On January 31, 2020, the World Health Organization declared the new coronavirus a global emergency, as the outbreak continued to spread beyond China – 106 cases in 19 countries, with no deaths outside China. There were no recorded cases in Ukraine, but it was on this day that then Prime Minister Oleksiy Honcharuk instructed that Ukrainian citizens be evacuated from China. The WHO recognized the spread of COVID-19 as a pandemic only on March 11, 2020. For objective reasons, the first wave of the coronavirus poll was conducted without public understanding of the seriousness of the problem in the country. The next wave took place before the WHO’s official statement on the pandemic, but against the background of news of a sharp deterioration in Europe, particularly in Italy. The third wave was conducted three days after introducing quarantine in Ukraine. The next four waves took place during the period of strict quarantine, with the last (eighth wave, May 14-15) carried out after the first easing, introduced on May 11.

We want to investigate what factors influenced the Ukrainians’ two fears with respect to the pandemic – that of contracting the coronavirus and that of losing their job.

In each of the waves, the respondents were asked the following questions: “How much do you care about the risk of catching the coronavirus?” and “In your opinion, how likely are you to catch the coronavirus?” We will think of the answer to the first question as an indicator of personal stress, since we are talking here about fear. The answer to the second question does not necessarily reflect fear – it is, rather, an indicator of a person’s awareness of the disease’s spread. It will help trace how the respondents’ mood changed from wave to wave.

Figure 2. Changes in fear levels regarding coronavirus infection and subjective evaluation of likelihood of infection 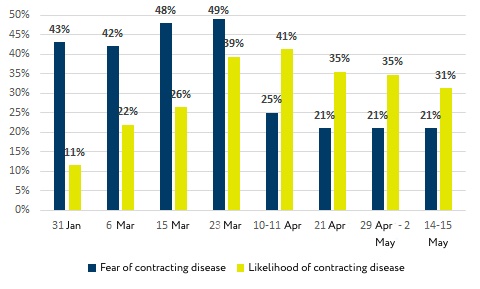 In Figure 2, we observe an interesting picture. The proportion of those afraid of contracting disease was unexpectedly high in January (43%), although most respondents rated the likelihood of their getting infected as low. Then, both indicators grow at the beginning of quarantine, but begin to behave differently, starting from April. The share of those believing the likelihood of infection to be rather high stabilized at 30-40% in April-May. But the fear of infection that arose long before the large-scale coronavirus march across the planet fell sharply, to 21%. Looking only at Figure 2, it seems that one month into quarantine people are already tired of it, just as they are tired of being scared, coming to terms with the fact that perhaps they will have to get sick.

What does people’s fear of the disease depend on? In answering this question, we use regression analysis. Let us define models, where the dependent variable is “fear of contracting disease”, described above (1, if the fear exists, and 0, if not), and the factors are the respondents’ social and economic characteristics (see the Appendix with the sample description at the end of this article). Table 1 presents the evaluation results of individual waves.

The evaluation was performed using a linear probability model and a binary choice logit model. Their results in the sense of statistical significance of the coefficients were the same, so we present the linear model results. The basic category for financial status variables is the average income level.

Source: own calculations based on Gradus poll data

We can see that only two factors have a relatively stable effect on the fear of contracting disease: gender and financial status. Women are more prone to fear than men. This is apparently an illustration of the fact that women generally feel more anxious and responsible for themselves and their families, and are usually more attentive to their health (as recorded in previous studies of behavior during quarantine). A significant coefficient of the financial status variable shows that people with low income (poor) are least afraid of contracting disease. As we will see below, this is directly related to the fear of losing their job due to quarantine. The influence of other variables is manifested sporadically. No significant correlations of fear with such characteristics as education level, marital status, etc were found. That is, it is not about someone being better or less well informed about the virus. Living conditions and financial concerns are more important.

The fear of losing a job grew during quarantine

The poll data contain information about the respondents’ employment, making it possible to trace the changes in the share of those referring to themselves as temporarily unemployed (Figure 3). Until the beginning of quarantine, this share was in the range of 3% to 4%, then it began to grow, stabilizing at about 9% in late April and early May. These data alone say a lot about the sharp deterioration of the labor market (read more about employment during quarantine using Gradus poll data here).

Figure 3. The share of those referring to themselves as temporarily unemployed, by waves 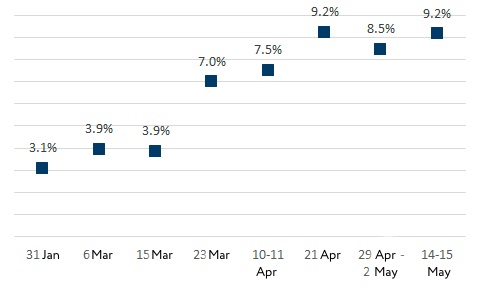 In the third wave that we studied (March 15), the respondents were for the first time given the option to answer “fear of losing a job” in an answer to the question “What fear does the coronavirus raise in you?” (Fig. 4). On March 15, 15% of employed respondents confirmed this fear, with 31% already on March 23. This increase is perhaps due to the panic caused by uncertainty that gripped people in the second week of quarantine. After all, the figure goes back to 17% in April – although later it increases to 22%.

Figure 4. The share of those reporting the fear of losing a job (among the employed), by waves 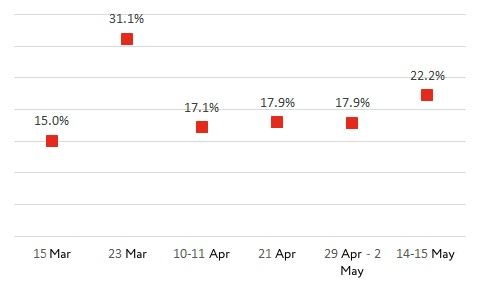 What factors influence the presence of this fear? We find that out from the evaluations in Table 3.

The fear of losing a job is most significantly influenced by the financial status and the fact of residing in a big city. People whose financial status is below average (including the poor) are more fearful of losing their job, with those in a good financial position (above average) being less fearful (in the model, the coefficients reflect comparisons with the reference group of people with average income).

Table 3. Evaluation results for the dependent variable “fear of losing a job”

Residents of large cities (with a population of over 1 million) are more fearful of losing their jobs compared to residents of smaller settlements. No such dependence is seen for the fear of infection. Exactly the same pattern can be seen in the differences in the responses of Kyiv residents and residents of other regions of Ukraine when answering the question “What generally causes you more anxiety: coronavirus’s spread due to the lifting of quarantine or an economic downturn due to a prolonged quarantine?”, put to the Gradus poll respondents on April 15. Only 20% of Kyivites were thus more fearful of the coronavirus than of an economic downturn, with close to 40% in other regions. Instead, 70% of Kyivites and about 50% of other regions’ residents reported greater fear of economic decline due to quarantine.

The COVID-19 pandemic and quarantine restrictions related to it have important implications for all areas of human life. Among the social and psychological consequences are stress and a growing fear both for one’s life and health, and for economic well-being. Although these fears may appear opposite at first sight, they are united by the fact that in both cases, it is a threat to basic human needs. There are numerous empirical data on how quarantine and isolation measures during epidemics have a negative impact on the psychological state of people, both during the actual quarantine and afterwards, when it is over. For example, in March 2020, one of the reputable journals in medicine, The Lancet, published a summary of the results of over 3,000 papers on this topic. The key conclusion is that in situations where quarantine is deemed necessary, officials should quarantine people for no longer than necessary, providing a clear justification and support measures. The review’s authors emphasize that the quarantine period should be short and the duration should not be changed unless in extreme circumstances.

It should be noted that the studies were based on the experience of other epidemics over the last two decades, whose scale cannot be compared to the current one. In this sense, the current situation is an emergency, where this exception is possible. However, the duration of the quarantine regime is already unprecedented.

Recent Gradus polls (September) also show a steady increase in Ukrainians’ dissatisfaction with life in quarantine: the fear of financial problems and a threat to the quality of children’s education overcome the fear of contracting coronavirus because of their long-term consequences. The stress faced by the population requires reasonable measures to soften restrictions, and is an argument against reintroducing strict quarantine. If a lockdown is necessary, support for people forced to stay at home should be much broader.

Appendix: description of the sample according to the respondents’ main characteristics 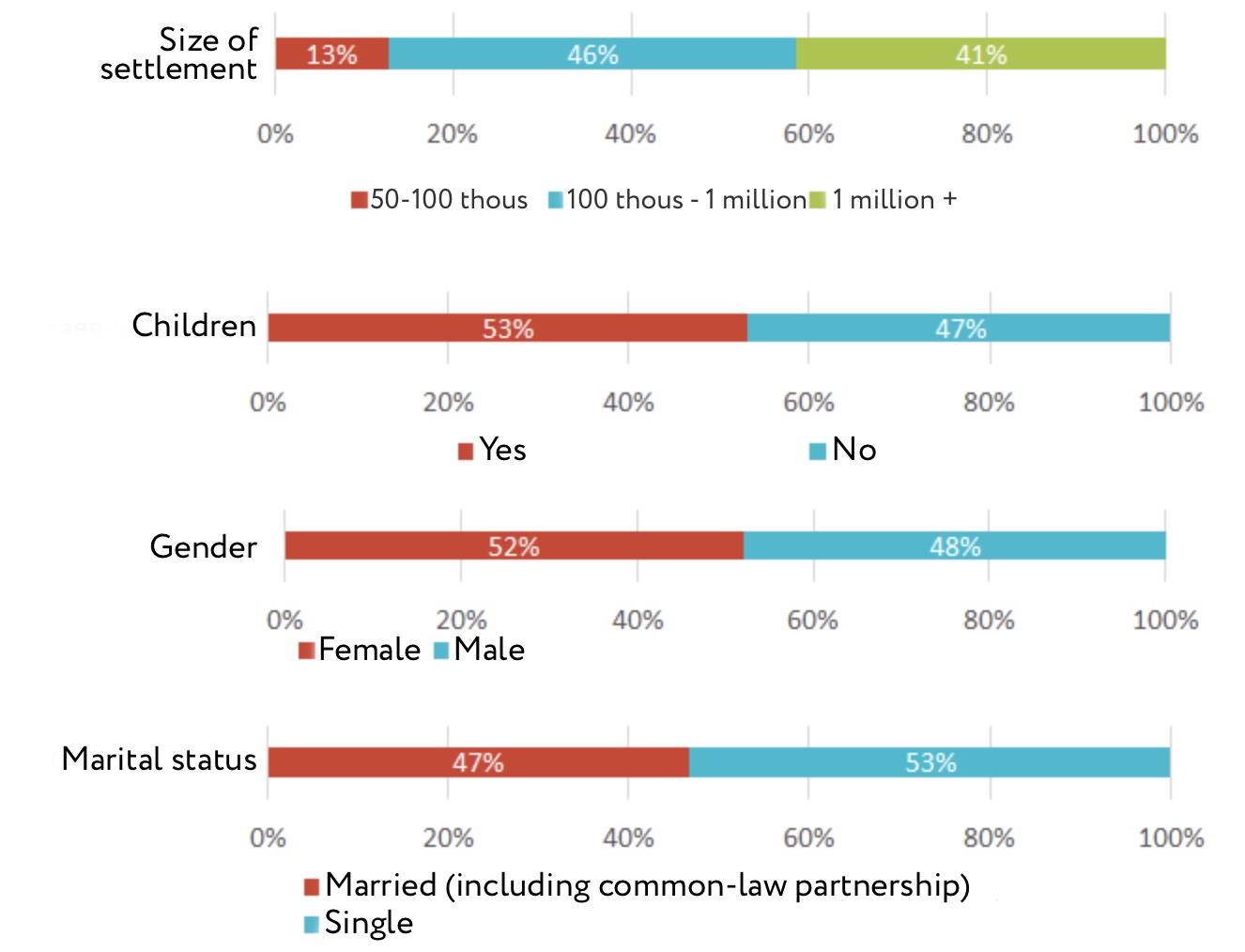 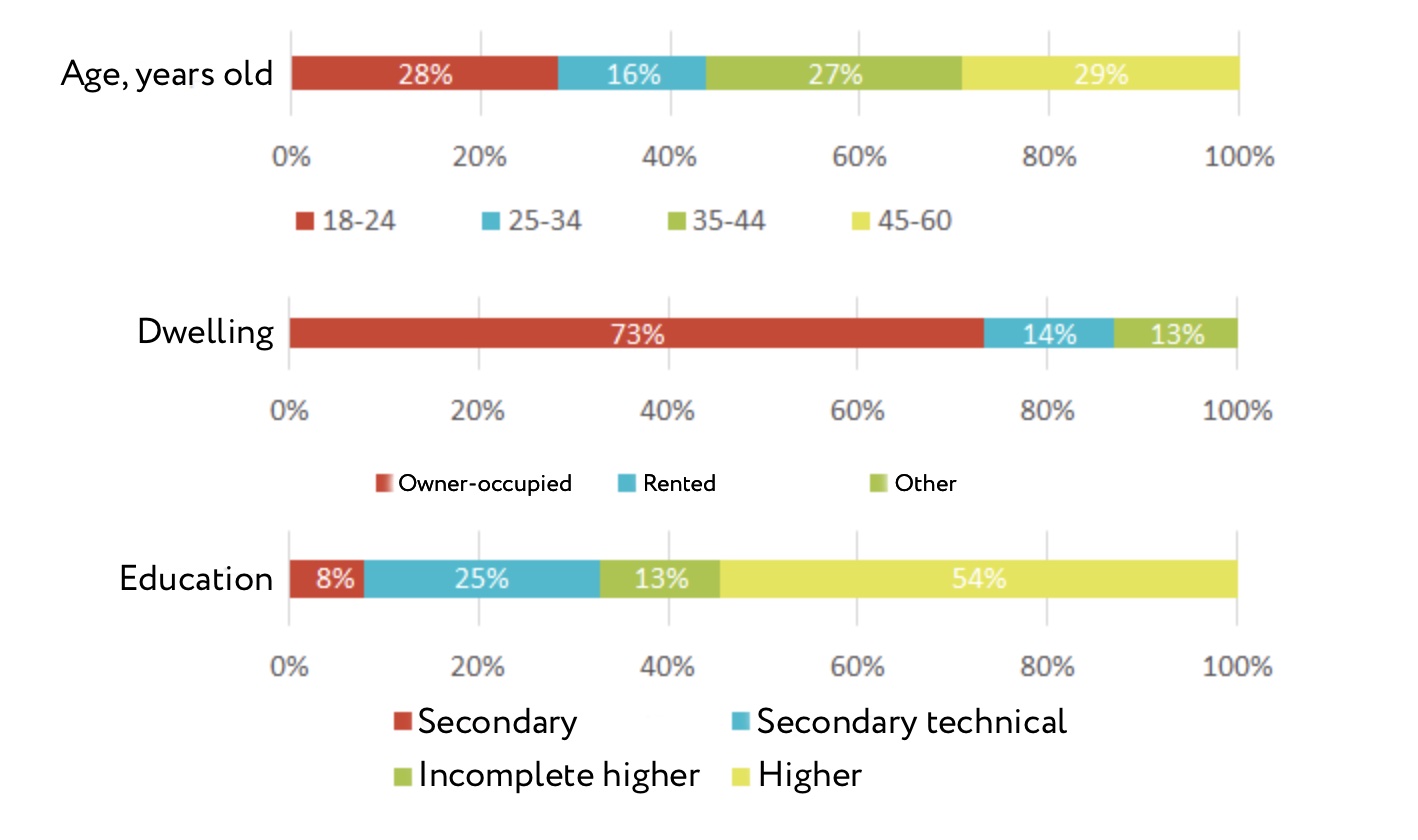