Survey "Ukrainians' perception of reforms during the full-scale war"

The survey has been conducted by the sociological agency InfoSapiens upon Vox Ukraine within the framework of the “Support of think tanks” project which is carried out by the International Renaissance Foundation with the financial support of the Embassy of Sweden in Ukraine.

The sample is representative of Ukraine’s adult population (over 18 years old) living in government-controlled territories, including those who left abroad after February 24, 2022. The sample’s structure is proportional to Ukraine’s population in terms of gender, age, and size of settlement and region based on State Statistics Service data as of January 1, 2022. The theoretical error does not exceed 2.2% for the total sample. Period: from October 12 to October 30, 2022

Which of the reforms implemented or underway are important

Ukrainians’ positive attitudes toward the importance of reforms mentioned in the survey outweigh the negative. In their opinion, the most important (i.e., “very important” and “rather important”) reforms are the digitalization of public services, army reform, decentralization, healthcare reform, and the creation of anti-corruption bodies.

Importance of reforms for respondents (in %) 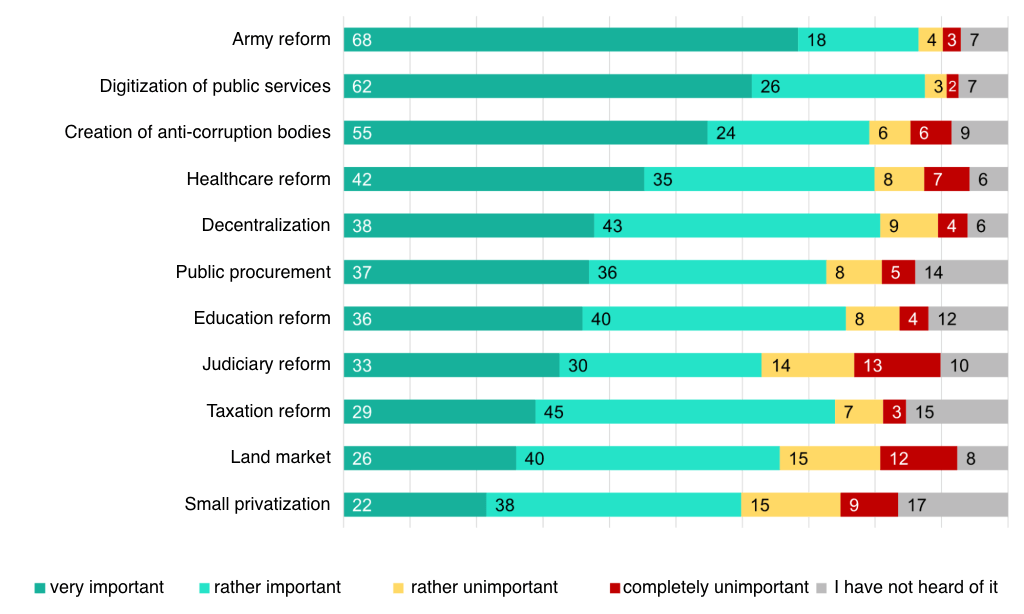 Gender aspect in attitudes toward reforms

17.8% of Ukrainians find it challenging to name reforms that should be carried out in 2023. However, 13% of respondents believe it is vital to further enhance defense capability (13.6% of men and 12.9% of women chose this option). Healthcare reform ranked second in importance, selected by 10.6% of respondents (7% of men and 13.6% of women).

Reforms the respondents think should be implemented in 2023 (in %) 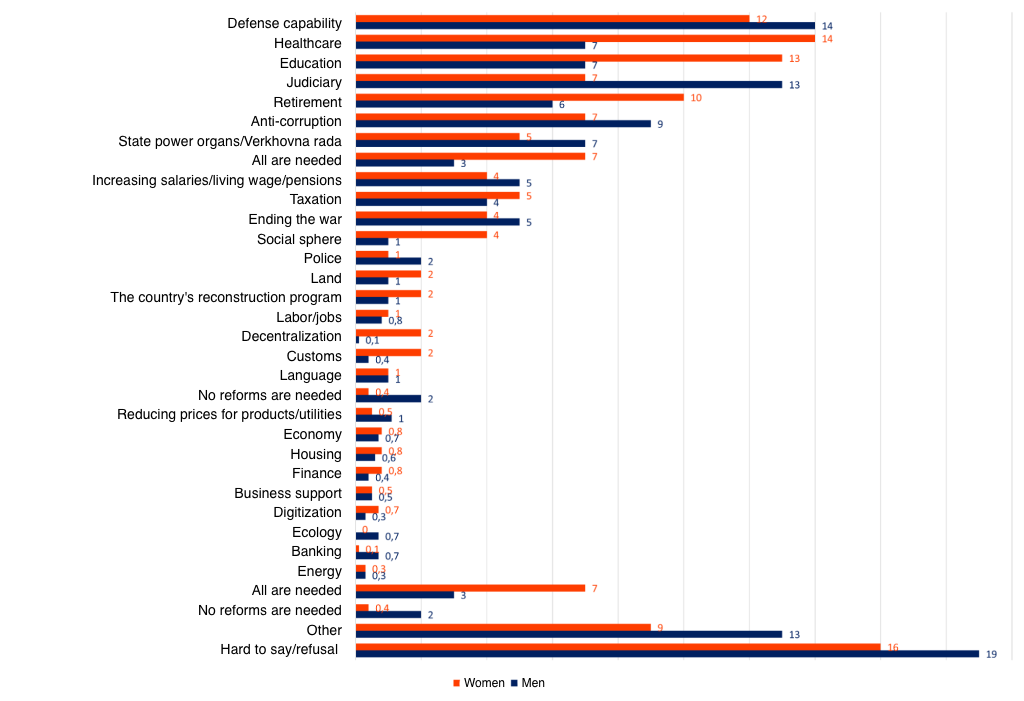 According to the survey, continuing to reform the environmental (0.4%), banking (0.4%), and energy (0.3%) spheres have the lowest importance.

Desired outcomes of the reform efforts

Respondents consider a reduction in corruption, an increase in Ukrainians’ well-being, and more efficient use of budget funds to be the reforms’ most important consequences. In the open part of the question (the answer “other” next to the proposed options), the respondents indicated “defense capability.”

For people aged 18 to 24, the most crucial reform outcomes are reduced corruption and more efficient use of budget funds. For respondents from age groups over 24, increasing the well-being of Ukrainians is more important than more effective use of budget funds.

What should be the most important reform outcome? (in %, respondents could choose up to three answers) 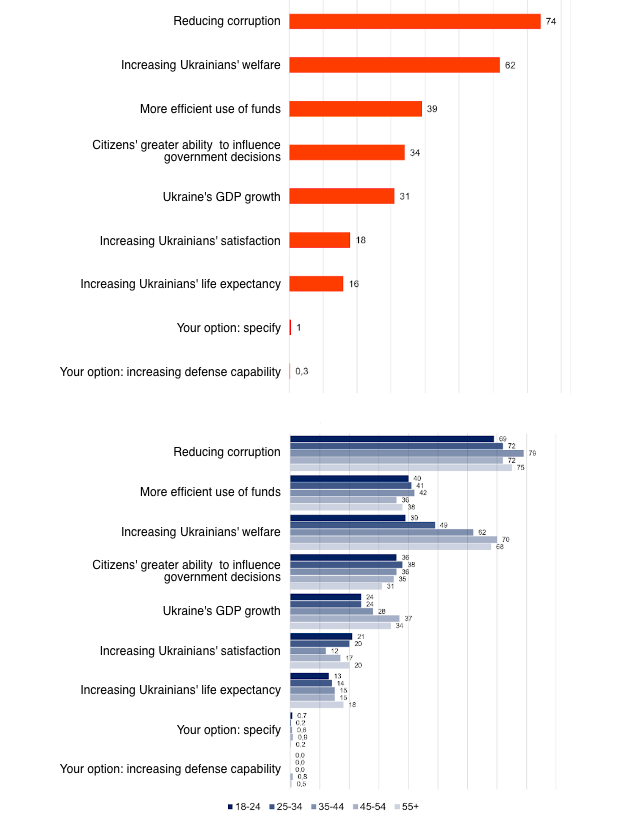 Nearly 40% of citizens are ready to withstand financial difficulties linked to the reform process for no more than a few months. Overall, every third respondent is unwilling to endure financial hardship during the reform process, and only 1% of respondents are prepared to hold out as long as it takes.

Willingness to withstand financial difficulties during the reform process (in %) 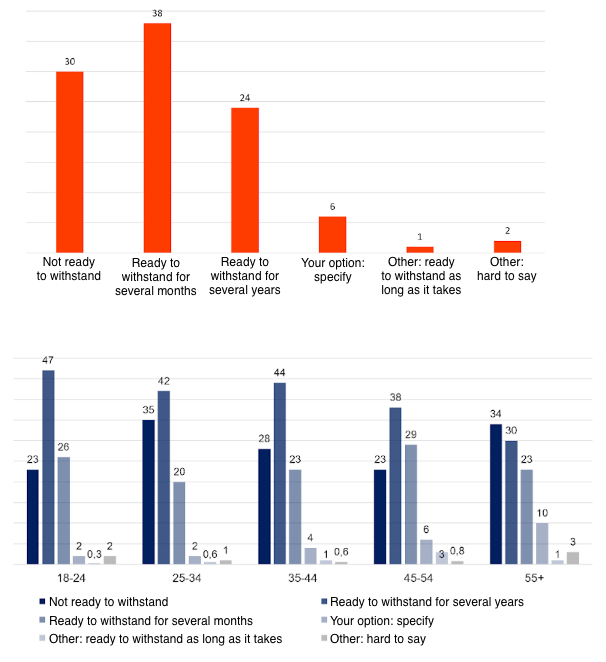 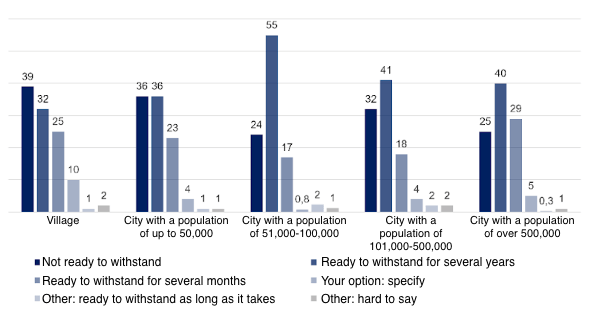 Regarding organizational difficulties of the reform process, most Ukrainians (48.4%) are ready to carry on through them for several months, and nearly a third (27.2%) are not prepared to endure them. This distribution remains virtually unchanged by gender or age.

Obstacles on the path of reforms

The main obstacles on the way to reforming Ukraine (in %, respondents could choose up to 3 answers)

Rate the importance of the implemented reforms:

What reforms need to be carried out or continued in 2023*? (open question)

*we cite respondents’ responses to this open-ended question in full, understanding that, e.g., raising wages is not a reform. Nevertheless, it can be considered a reflection of Ukrainian’s wishes.

What should be the most important reform outcome?

Name the main obstacles on the way to reforming Ukraine