The Cost of PrivatBank: What We Know About the State of Affairs of the Country’s Largest Bank | VoxUkraine

The Cost of PrivatBank: What We Know About the State of Affairs of the Country’s Largest Bank

The activities of any bank, even of such a giant as PrivatBank, boil down to a single function – redistribution of funds from those who have them in excess (depositors) to those who need them (borrowers). The interest rate on the issued loans coupled together with other revenues (fees, etc.) should cover the bank’s expenses on deposit interest, operating expenses, and losses from non-repayment of loans. As a result, after all these expenses are covered, the shareholders keep a certain part of income, which is called profit.

To minimize potential losses from non-repayment of issued loans, banks require that the borrowers offer some collateral. This is a must. The larger the ratio of the cost of collateral to the amount of debt, the lesser the amount the bank loses in case of non-repayment. Therefore, banks, as a rule, require a high-quality collateral from their borrowers. It is absolutely abnormal when a bank tries to convince the regulator that property rights to the company’s future revenue is a high-quality collateral which is enough to lend the depositors’ money.

How many loans have been issued to the bank-related persons? It should be noted that those 97% or 100% – the figures provided by the National Bank – concern only the portfolio of loans issued to companies. About 35 billion UAH of loans to the individuals and small businesses are not taken into account when calculating these indicators.

As of late 2015, the previous auditors confirmed that the loans issued to bank-related persons reached 41.5 billion UAH or 19% of the total amount of net loans, including embedded derivatives. Representatives of the regulator have claimed several times that the loans had been issued to the companies, formally not connected with the financial and industrial group which later transferred the funds to real businesses, including those based abroad. According to formal characteristics, enterprises, which can actually be regarded as intermediaries in the mechanism of financing business of former shareholders, do not meet the criteria of international accounting standards (IAS24). In this regard, when it comes to identifying bank insiders the national methodology is more stringent than the international one and it also takes into account financial creativity of Ukrainian business.

According to the procedure of auditing financial reports, the bank management prepares financial reports, while auditors confirm their validity. This is the most desirable outcome for any company which is being audited. However, if the auditors believe that the reports should contain other figures or they could not prove that the reported information is correct, the auditing company expresses a “modified opinion.” Auditors have no right to draw up financial reports of companies – they can only check them and express their opinion on whether these reports reflect the real state of affairs correctly.

There is also another question: why has the new management failed to submit a report with the figure which is, in their opinion, correct and had to use the data received from the previous management of PrivatBank?

What is the loan balance of PrivatBank and how bad are these loans?

Numerous media reports might have created an impression that it is not known for sure how many loans the bank has issued or how big a balance sheet hole is. This is not entirely true – there are, rather, certain issues with the communication of complex concepts.

It was a portfolio of loans to legal entities that constituted the major problem. In their report for 2015, previous auditors of the bank (PWC) stated that a large part of the loans was backed by future revenue, corporate rights to these borrowers, and mutual guarantees. The regulator considered such collateral unsatisfactory, because should debt servicing stop, there would be virtually no property the bank could recover from its borrowers. Repayment of such debt depended on the goodwill of borrowers and could stop at any time. It seemed that in this case the bank did not act as a classic bank, as it was not interested in securing repayment of loans in the future.

In fact, PrivatBank has faced an ultimatum: either loans are transferred to operating companies with sufficient collateral or the bank is declared insolvent. PrivatBank, similarly to other banks, had five years to resolve the issue of insider debt.

In October-November 2016, before the nationalization, the bank transformed its loan portfolio in the amount of 137 billion UAH (confirmed by an audit). As a result of these operations, borrowers changed, the currency of the loan became UAH, payback deadline was extended to 2024-2025, and the rate was reduced to 10.5% – lower than the cost of attracting deposits. The National Bank was not satisfied with such an arrangement, as its demands have not been fulfilled – non-functioning companies have been replaced with equally non-functioning ones, while the loans were not backed by any real collateral. It was obvious that introduction of the provisional administration has thus become only a matter of time.

The first audit after the nationalization has resulted in the formation of corporate loans reserves in the amount of almost 130 billion UAH. The audit of the EY confirmed a slightly larger amount of reserves (by 23 billion UAH), although it has not confirmed in which period they actually originated. It is not the first time when international standards turn out to be more lenient than the national ones. According to the NBU methodology, the unsecured credit risk for the corporate portfolio is more than 190 billion UAH, which is 20 billion UAH more than the reserves formed under IFRS. A new tranche of capitalization is supposed to cover this 20 billion gap.

The final estimate of loans issued to legal entities is almost 30 times less than the one the bank showed before the nationalization. In fact, the regulator and the new management claim that “these loans are worthless.” Is it possible that this estimate is too low (although confirmed by the auditors), and the bank would be able to show profit after the revaluation of loans? Yes, but first it is necessary to force the previous shareholders to start repaying their debts.

Fig.1. How the estimate of the credit portfolio (legal entities) has changed? 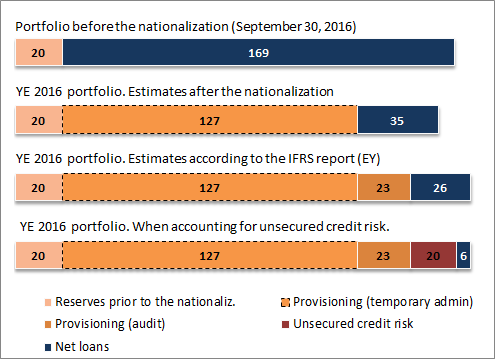 Fig.2. How the estimate of the credit portfolio (individuals) has changed? 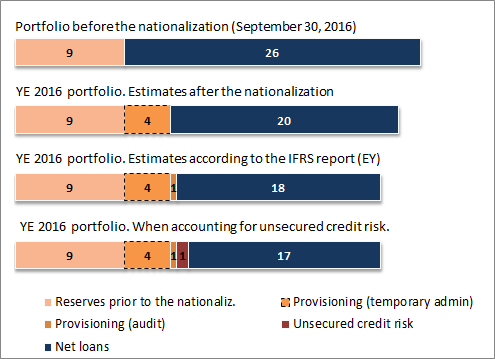 The price of nationalization

In December 2016, the first bill for the bank nationalization in the amount of 29.4 billion UAH was actually paid by the bank’s former shareholders and associated legal entities and individuals, as well as by independent institutional investors. Much of the burden of saving the bank was borne by taxpayers.
3,500 UAH per one resident of Ukraine, the figure voiced by the National Bank, is a fairly optimistic calculation of the cost of nationalization of PrivatBank. This calculation includes only the amount of domestic government loan bonds issued by the Ministry of Finance, not the interest expenses on them.
Taking into account the announced tranche of 38.5 billion UAH, the total amount of governmental spending on the capitalization of the bank should reach 155.3 billion UAH. Future interest payments will amount to another 184.5 billion UAH. Given the population of 42.6 million people, the total cost will be 8,000 UAH per one citizen. Moreover, some of the issued bonds are indexed to the change in the US dollar exchange rate. Since these securities were issued, the US dollar exchange rate has fallen by 80 kopecks. Yet in the future, should the exchange rate exceed 27 USD, budget spending will grow by 2.7 billion UAH per each hryvnia of the exchange rate increase. Given that these index-tied securities shall be repaid in 2028-2032, it is not yet possible to assess the impact of this factor.

Table.1. Four stages of additional capitalization of PrivatBank by the government

Fig.3. Schedule of repayment of domestic government loan bonds issued before the capitalization and the interest payments

Can this amount of governmental spending aimed to rescue PrivatBank increase?

Unfortunately, yes. The greatest threat is the claims of the bank’s creditors whose funds were written off against the bank’s capital. Any amount that the bank will have to compensate is considered as its loss. In addition, like any business entity, the bank is not immune to negative financial outcomes in the future – both for objective and subjective reasons.

Can the spending for PrivatBank decrease? Yes. First of all, in case the valuation of the property transferred onto the bank’s balance sheet in 2016 grows by 21.3 billion UAH, and the bank’s legal rights to it are confirmed. Then the amount of the last additional capitalization of 38.5 billion UAH will reduce to 16 billion UAH. Given the future interest payments, this will cut the total expenses of the taxpayers by 42.7 billion UAH – by almost 1,000 UAH per one resident.

However, the most important factor in reducing the financial burden of the taxpayers is repayment of previously issued loans by the companies associated with the former shareholders of the bank. Otherwise, PrivatBank will not be able to operate as a full-fledged bank, because interest on individual deposits will actually be covered by the state budget, i.e. by the shareholder itself. This is not that classical model of bank’s functioning which was mentioned in the beginning of this article.