The Economic Costs of Hybrid Wars: The Case of Ukraine | VoxUkraine

The Economic Costs of Hybrid Wars: The Case of Ukraine

Starting from Keynes in “The economic consequences of the peace” (1919), many studies show that wars cause persistent losses for states and the civil society. Yet, to our knowledge this is the first study quantifying the actual cost of the Donbass war on Ukraine’s economy.

Our statistical analysis shows that, due to the war, Ukraine’s per capita GDP declined by 15.1% on average over the years 2013-2017 and, in its absence, would have instead followed a rather stable, slowly increasing trend.

The Donbass war is an armed conflict between anti-government groups of Russian-backed separatists and the Ukrainian government, taking place in the aftermath of the 2013 Euromaidan protests and the 2014 Ukrainian revolution. As a hybrid and complex form of warfare, the Donbass war is an especially interesting case study as neither Ukraine nor any other entity declared the war status. Many modern conflicts are likely to arise as a consequence of regional struggles with governments facing non-governmental actors who operate in concert with external players. Specifically, hybrid wars especially threaten the government’s sovereignty due to lack of soil governance and means to tackle issues like unclear front lines or friendly/enemy areas; unclear casus belli and politico-strategic goals; and new tactics that focus on the weakening of governments and state institutions rather than on direct combat (Deshpande, “Hybrid Warfare: The Changing Character of Conflict”, 2018, Pentagon Press).

The Donbass is of considerable importance for Ukraine’s production. Before the 2014 Ukrainian Revolution, this region accounted for about a quarter of the country’s exports and more than 15% of capital investment (State Statistics Service of Ukraine, 2014). For instance, the Donbass used to provide raw materials such as coal, steel and other industrial goods to international manufacturing industries. As of August 2014, the industrial production dropped by 60% and 85% in the Donbass regions of Donetsk and Luhansk, respectively, due to power cuts and the destruction of transport infrastructures. Overall, major reasons for the decline of Ukraine’s economic activity are high costs of trade together with employment, agricultural and financial losses, compressed government spending, and the partial military mobilization coupled with growing political instability (Ministry of Foreign Affairs of Ukraine, “Kremlin’s Black Book. Russian war against Ukraine”, 2015).

The major challenge for estimation of the costs of conflict is disentangling the direct effects of the war from other events that would have happened in the absence of the conflict and which could influence the country’s economic growth. To address this issue, the statistical literature developed an approach based on potential (counterfactual) outcomes, which attempts to reconstruct unobserved economic indicators in the absence of a given intervention (Rubin, “Estimating causal effects of treatments in randomized and nonrandomized studies”, 1974).

In our study, we consider per capita GDP foregone as the main measure of welfare loss caused by the Donbass war. We reconstruct Ukraine’s counterfactual GDP in absence of the war by building a “synthetic Ukraine” which is a weighted outcome combination of countries similar to Ukraine, but not affected by the Donbass war. Synthetic Ukraine is estimated with countries that resemble Ukraine’s economy as accurately as possible before the war’s outbreak. We match countries not only on pre-war values of GDP per capita but also on its determinants such as inflation, investment, trade dependence, and other socio-economic measures. Finally, as shown in the graph below, we compare Ukraine’s GDP path (the “treated” outcome, solid line) after the war with its counterfactual estimate had the war not happened (the “synthetic” outcome, dashed line). We estimate causal effects of the conflict from 2013, when the high political instability caused by the violent Euromaidan protests in November may have already impacted Ukraine’s economy. 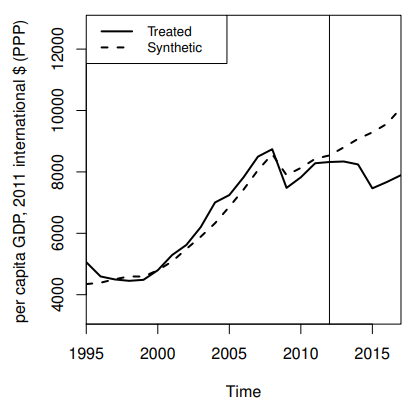 Results from the regional analysis confirm the devastating effect of the war for the Donbass area. In particular, we estimate that Donetsk’s per capita Gross Regional Product (GRP) dropped by 42% ($4,294) on average due to the war. Estimates for Luhansk are of even larger magnitude with a per capita GRP average decrease of 52% ($3,355).

Mechanisms underlying the GDP decline caused by the war

There are several factors explaining the severe effects of the Donbass war on Ukraine’s economy. These are, for instance, disruption to production, trade and employment, agricultural and financial losses, compression of public expenditures, and a partial military mobilization coupled with growing political instability.

Since its outbreak, the war took a heavy toll on Ukraine’s economy especially due to trade disruptions and diverted government spending. Between May and September 2014, the European Bank for Reconstruction and Development adjusted its predictions on Ukraine’s GDP loss from 7% to 9%. In fact, only a few months after the war beginning, most of eastern Ukraine’s core industries and infrastructure have been either shut down or destroyed. Also, physical losses as well as water and electricity cuts made large facilities such as coal and power stations inoperable. For instance, coal mines have flooded because power cuts prevented water extraction, and the fewer transfers of the Donbass’ exports of coal, steel and other industrial goods became more costly due to the destruction of bridges, roads and railways.

As a result, during the war, the Donbass drastically reduced its contributions to the country’s economy. In September 2014, the Prime Minister Arseniy Yatsenyuk reported that the Donbass war was costing the government 6.15 million dollars a day. Donetsk’s politician and economist Alex Ryabchyn referred to a variety of reasons for such costs. He reported that (i) several manufacturing industries depend on raw materials coming from the Donbass, (ii) exports of coal, steel, and power heavily depend on the Donbass’ output and transportation infrastructure, and (iii) one third of Ukraine’s market is fostered by trade with Russia. In the latter respect, the index of merchandise exports between Ukraine and Russia has fallen by 80% over 2013-2016.

Moreover, investors usually shy away in the presence of conflicts, and the confidence in the overall economy plummets. In the Donbass case, real foreign direct investment stagnated at about 1% of GDP on average over 2014-2018. Furthermore, Ukraine’s energy sector was also largely damaged by the failure of the Minsk peace process and the trade blockade in the Donbass started in 2015 and culminated in 2017. The latter was operated first by pro-Ukrainian activists, and later supported by the Ukrainian National Security Council, to block the transport of raw materials including, in particular, anthracite coal from the Donbass to the rest of Ukraine. This resulted in major production breaks for companies not only in eastern but also in western Donbass due to the interconnection of their production cycles.

As an additional consequence of the 2017 blockade, Ukraine scored higher in terms of internal conflicts fought, and growing political instability which proxies for the propensity of a government collapse. Especially if coupled with increased internal conflicts, political instability has been shown to damage a country’s economy by reducing investment, lowering the rates of productivity growth and, to a smaller extent, of physical and human capital accumulation (Hussain, “Can political stability hurt economic growth?”, 2014, World Bank Blog).

Yet, important questions remain open, namely, whether the negative effects of the Donbass war on Ukraine’s economy have been reinforced by the government’s mismanagement of the conflict and a weak external environment during the war. The latter includes, for instance, lower global commodity prices that resulted in a deterioration of Ukraine’s terms of trade. On the governmental side, instead, the World Bank reports that structural imbalances such as an already consolidated fiscal deficit were negatively adjusted in response to the war shock. This likely resulted in a compression of domestic demand, increased public and guaranteed debt, and severe currency depreciation which induced deposit outflows, further reducing confidence in the economy. In this respect, an empirical study by Kochnev (2019) estimates a nonlinear and on average positive association between Ukraine’s stock market performance during the war and investors’ expectations on the prospect of conflict resolution.

In light of all the above, we can expect that not only the Donbass but also other Ukrainian regions were damaged by the conflict, in which case our estimated GDP losses would represent a lower bound for the true costs of the Donbass war on Ukraine’s economy. Moreover, given the ongoing nature of the conflict at the time of writing, the continuation of this study should be pursued as more data become available. It should be assessed how the costs evolve over time, in particular, whether the estimated destructive effects increase in scope as more workforce and investment flee the state. This knowledge is crucial to mitigate the damaging consequences of the conflict, target aid and investment more effectively, and finally ensure an healthy reconstruction of the badly wounded economy.