The Economics of Rebellion in Eastern Ukraine

From a policy standpoint, the economic roots of the Donbas conflict should be seen as good news. Despite the ethnocentric media coverage of this war in Russia and the West, the data show that attempts to divide Ukraine along ethnic or linguistic lines are likely to fail.

In April 2014, angry mobs and armed men stormed administrative buildings and police stations in eastern Ukraine, waving Russian flags and proclaiming the establishment of “Peoples’ Republics” in Donetsk and Luhansk. At the time, some observers predicted that the “pro-Russian” uprising would spread to other parts of southeast Ukraine, throughout the vast territory Russian President Vladimir Putin referred to as historical “Novorossiya”.

Contrary to these forecasts, the rebellion remained surprisingly contained. No region outside Donetsk or Luhansk experienced large-scale armed conflict or fell under rebel control. Not only were separatists unable to realize the project of a greater “Novorossiya” stretching from Kharkiv to Odesa, they failed to consolidate their grip even within the borders of the Donbas. Not more than 63% of municipalities in Donetsk and Luhansk oblasts were under rebel control at any time during the first year of the conflict, and less than a quarter of these territories showed resistance to government forces during Kyiv’s attempt to liberate them.

What explains local variation in rebellion? Why is rebel violence more intense in some areas than in others? Why have some towns in eastern Ukraine remained under government control while others fell to the separatists? 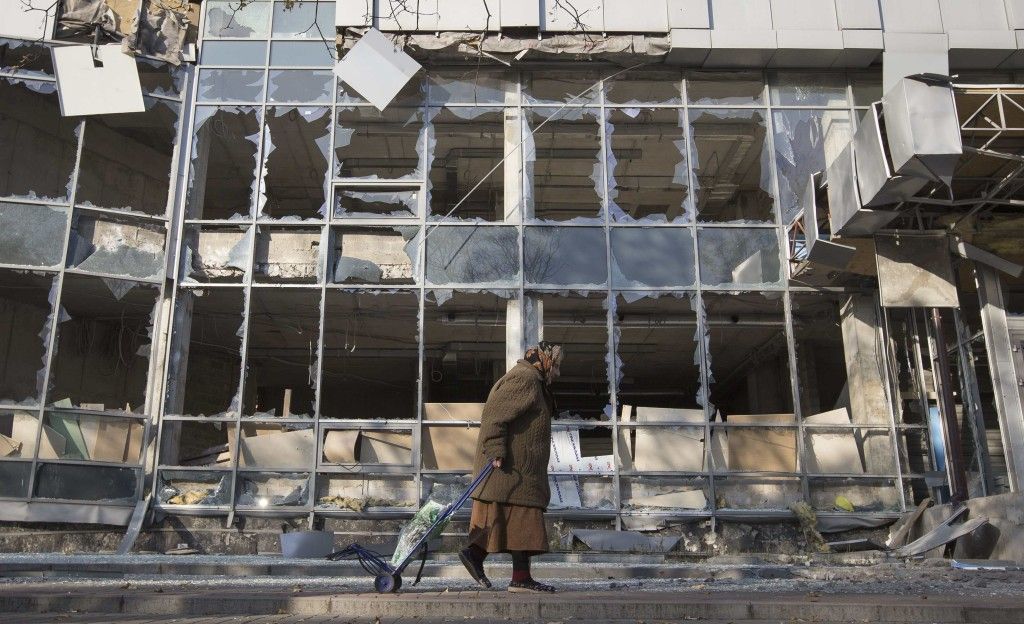 The most common answers to these questions have fallen into one of two categories: ethnicity and economics. The first view expects rebellion to be more likely and more intense in areas home to large concentrations of ethnolinguistic minorities – in this case, Russians or Russian speaking Ukrainians. According to this logic, geographically concentrated minorities can overcome some of the collective action problems associated with rebellion – such as monitoring and punishing defectors – while attracting an influx of fighters, weapons and economic aid from co-ethnics in neighboring states. Among others, Vladimir Putin too has cast the Donbas conflict as a primarily ethnic one: “The essential issue is how to ensure the legitimate rights and interests of ethnic Russians and Russian speakers in the southeast of Ukraine”.

An alternative explanation for rebellion is economic opportunity costs. According to this view, as income from less risky legal activities declines relative to income from rebellious behavior, participation in rebellion should rise. As Maidan and the Revolution of Dignity proclaimed adherence to European values and set the path towards Europe and away from the Custom’s Union with Russia, the opportunity costs of rebellion declined in the Donbas. As a heavily industrialized region with deep economic ties to Russia, the Donbas was uniquely exposed to potential negative economic shocks caused by trade openness with the EU, austerity and trade barriers with Russia. A rebel fighter with the Vostok battalion summarized this view: “Many mines started to close. I lost my job. Then, with what happened during the spring, I decided to go out and defend my city”.

In an article forthcoming in the Journal of Comparative Economics, I evaluate the relative explanatory power of these two perspectives, using new micro-level data on violence, ethnicity and economic activity in eastern Ukraine. I find that local economic factors are stronger predictors of rebel violence and territorial control than Russian ethnicity or language. Ethnicity only had an effect where economic incentives for rebellion were already weak. Separatists in eastern Ukraine were “pro-Russian” not because they spoke Russian, but because their economic livelihood had long depended on trade with Russia and they now saw this livelihood as being under threat.

The economic roots of the pro-Russian rebellion are evident from new data on violence and control, assembled from incident reports released by Ukrainian and Russian news agencies, government and rebel statements, daily ‘conflict maps’ released by both sides, and social media news feeds. The data include 10,567 unique violent events in the Donbas, at the municipality level, recorded between then President Viktor Yanukovych’s flight in February 2014 and the second Minsk ceasefire agreement of February 2015. Figure 1 shows the geographic distribution of rebel violence and territorial control during the first year of the conflict. 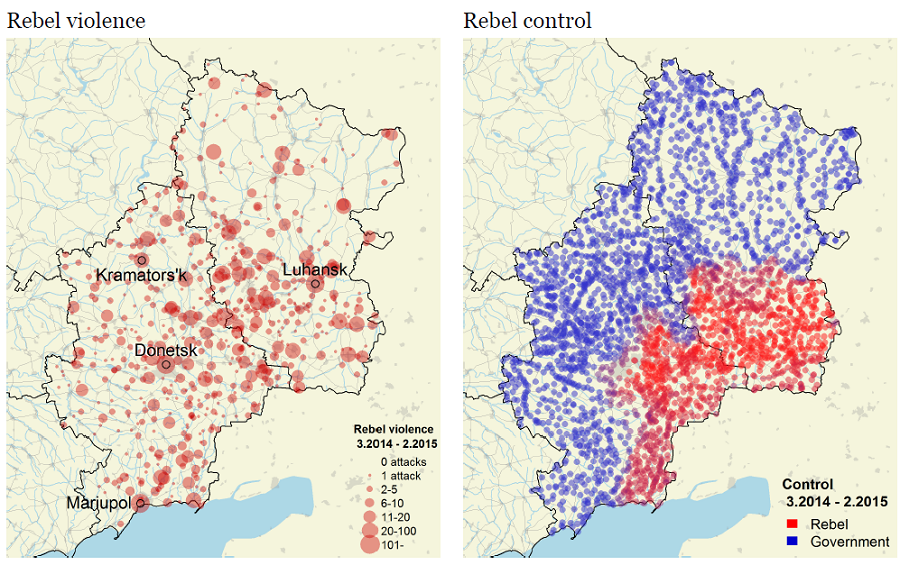 To explain variation in the timing and intensity of violence and control, I considered the proportion of Russian speakers residing in each municipality, and the proportion of the local labor force employed in three industries, differentially vulnerable to post-Euromaidan economic shocks. These included machine-building, which is heavily dependent on exports to Russia, highly vulnerable to Russian import substitution, and currently lacks short-term alternative export markets. At the other extreme, there is the metals industry, which is less dependent on Russia, and a potential beneficiary of increased trade with the EU. Finally, I considered employment in the mining industry, which had grown dependent on Yanukovych-era state-subsidies, and became highly vulnerable to IMF-imposed austerity measures. Given the relative exposure of these industries to post-Euromaidan economic shocks, one should expect the opportunity costs of rebellion to be lowest in machine-building towns and highest in metallurgy towns, with mining towns falling in the middle. Figure 2 shows the spatial distribution of these variables. I also accounted for a host of other potential determinants of violence, like terrain, logistics, proximity to the Russian border, prewar electoral patterns, and spillover effects from rebel activity in neighboring towns. 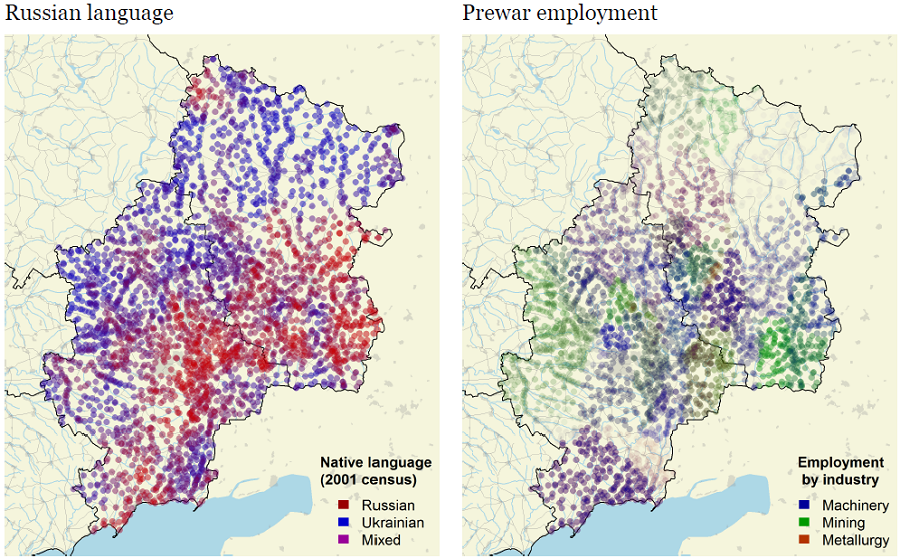 A statistical analysis of these data reveals that a municipality’s prewar employment mix is a stronger and more robust predictor of rebel activity than local ethnolinguistic composition. In municipalities more exposed to negative trade shocks with Russia (municipalities with high shares of population employed in machinery and mining), rebel violence was more likely to occur overall, and was more intense. For a median Donbas municipality, an increase in the machine-building labor force from one standard deviation below (4%) to one standard deviation above the mean (26%) yields a 44% increase (95% credible interval: a 34%-56% increase) in the frequency of rebel violence from week to week.

These municipalities – where the local population was highly vulnerable to trade disruptions with Russia – also fell under rebel control earlier and took longer for the government to liberate than municipalities where the labor force was less dependent on exports to Russia. On any given day, a municipality with higher-than-average employment in the beleaguered machine-building industry was about twice as likely to fall under rebel control as a municipality with below-average employment in the industry.

By contrast, there is little evidence of either a “Russian language effect” on violence, or an interaction between language and economics. The impact of prewar industrial employment on rebellion is the same in municipalities where a majority of the population is Russian-speaking as it is where the majority is Ukrainian-speaking. Russian language fared slightly better as a predictor of rebel control, but only under certain conditions. In particular, where economic dependence on Russia was relatively low, municipalities with large Russian-speaking populations were more likely to fall under rebel control early in the conflict. The “language effect” disappeared in municipalities where any one of the three industries had a major presence. In other words, ethnicity and language only had an effect where economic incentives for rebellion were weak.

The seemingly rational economic self-interest at the heart of the conflict may seem puzzling, given the staggering costs of war. In the eighteen months since armed men began storming government buildings in the Donbas, over 8000 people have lost their lives, and over a million have been displaced. Regional industrial production fell by 49.9% in 2014, with machinery exports to Russia down by 82%. Suffering heavy damage from shelling, many factories have closed. With airports destroyed, railroad links severed and roads heavily mined, a previously export-oriented economy has found itself isolated from the outside world. If local machinists and miners had only known the scale of the destruction to come, the economic rationale for rebellion would surely have appeared less compelling. Yet when choosing between a high-risk rebellion to retain one’s economic livelihood and an almost certain loss of income, many people chose the first option.

From a policy standpoint, the economic roots of the Donbas conflict should be seen as good news. Despite the ethnocentric media coverage of this war in Russia and the West, the data show that attempts to divide Ukraine along ethnic or linguistic lines are likely to fail. These results can also explain why the conflict has not spread beyond Donetsk and Luhansk. Home to a large concentration of enterprises dependent on exports to Russia, highly subsidized and traditionally shielded from competition, the Donbas became exposed to a perfect storm of negative economic shocks after the Euromaidan. No other region in Ukraine, or the former Soviet Union, has a similarly vulnerable economic profile. Without a compelling economic motive, a pro-Russian rebellion is unlikely to occur elsewhere in Ukraine.