The End of the Reforms? Bad News of the Fourth Quarter of 2020 | VoxUkraine

The End of the Reforms? Bad News of the Fourth Quarter of 2020

At the end of 2020, the pace of reforms has slowed significantly. Compared to the previous quarter, the number of important regulations that change the rules of the game in the country has reduced by three times (16 to 50 (anti)reformatory events). But that’s not all the bad news. In the fourth quarter of 2020, we recorded the largest anti-reform in the history of the Index. It was the decision of the Constitutional Court, which practically blocked the activities of the National Agency for the Prevention of Corruption.

This decision received -4.5 points from experts in the range from -5 to +5. Such a low score dragged the entire index down, and for the first time in the history of observations (since January 2015) it fell below zero — to -0.8.

Among all regulations issued by government agencies, the index experts selected 16 ones that are able to influence the rules of the game in the country (in the third quarter we recorded 50 important changes: 44 reforms, 4 events with a score of 0 (zero) and 2 anti-reforms).

14 of them received a positive assessment from experts. The Law on the Impossibility of Bankruptcy of Budgetary Institutions collected both positive and negative assessments and received a total of 0 points. Another important normative act — the decision of the Constitutional Court on the unconstitutionality of the provisions of the Law “On Prevention of Corruption” — “plunged” to -4.5 points. This significantly affected the average score of a single event in the 4th quarter. Compared to the previous quarter, it decreased by 1/3 from +1.1 points to +0.7 points.

A little bit of positivity

Only two regulations in the fourth quarter received a score of +2.0 points, all the rest had not reached even such a moderately positive rating. Namely:

✓ Law on Regulation of Microcredits (iMoRe 147, +2.0 points), which extended the requirements for consumer loans to non-bank institutions and required non-bank credit institutions to submit information on microloans to the Bureau of Credit Histories. Previously, only banks had to indicate the actual interest on the loan and the estimated cost of services of third parties (insurers, appraisers), if they know it. Non-bank institutions that issue loans for up to one month and the amount of which does not exceed one minimum wage, abused the opportunity of not informing the consumer about all the nuances of the loan agreement. Therefore, sometimes their clients agreed to agreements under which the interest rate reached 650% per annum. Law 891-IX harmonized the rules for informing about the terms of loans between banks and non-bank financial institutions.

✓ Law on Reorganization of Communities and Districts (iMoRe 149, +2.0 points), which regulated succession in the formation of authorities in new communities and districts. After the creation of new ATCs and districts, as well as after the local elections, it was necessary to organize the division of powers of districts and communities to finance health care, education, culture, sports, as well as succession to communal and state property, budgets, rights and obligations. The new law did that. But not to the full extent. In particular, the law does not take into account the possibility of creating starosta (senior) districts; it is not thought out what to do with the former village councils, which are “separating” — some village or villages go to one community, some to another.

Neither Fish Nor Fowl

✓ The Law on the Impossibility of Bankruptcy of Budgetary Institutions (iMoRe 147, 0.0 points) eliminates the legal vacuum that arose with the adoption of the Code of Bankruptcy Procedure in 2019. Then the ban on bankruptcy of budgetary institutions remained unwritten. A situation has arisen that has created opportunities of bankrupting schools, hospitals and other institutions with a social function that do not affect the economic situation of the state, but ensure the fulfillment of its responsibilities to citizens. Their bankruptcy is impossible, given in particular the case law of the Supreme Court of Human Rights, which states that the state is responsible for financing such institutions and for all financial requirements imposed on them. The adopted law corrects a legislative gap to eliminate the risk of abuse in the bankruptcy market.

✓ In autumn, the Constitutional Court ruled that a number of provisions of the Law of Ukraine “On Prevention of Corruption” and the Criminal Code of Ukraine (iMoRe 146, -4.5 points) were unconstitutional. In particular, the judges ruled that the National Agency on Corruption Prevention (NACP)’s powers to monitor the implementation of anti-corruption legislation by judges were contrary to the principle of separation of powers established in the Constitution. The CCU believes that special institutions need to be established in Ukraine to monitor judges’ compliance with anti-corruption laws and to provide separate declaration rules for judges. The NACP’s authority to control and verify declarations of civil servants, to store and publish such declarations, to monitor their way of life, etc. was also declared unconstitutional. This decision undermined the capacity of the anti-corruption system and provoked the constitutional crisis in the country.

At the end of December, the President signed two laws passed by the Verkhovna Rada, which partially restored the powers of the NACP (the law restoring the full operation of the NACP (iMoRe 150, +1.5 points) and the law on the resumption of liability for false declarations (iMoRe 150, +1.0 points). However, there are problems with these solutions. In particular, in the law on the restoration of liability for false declarations, according to Oleksandr Kalitenko of TI Ukraine, “deputies actually signed their reluctance to bear fair punishment for lying in declarations and concealment of their property,” because “the upper limit of punishment for concealment of excessive wealth is that any official will be able to survive it, preserving both his potentially illegal property and his position”.

What has changed in the key areas?

In the fourth quarter, we recorded progress in only three of the five areas of observation: governance, monetary policy, and public finance. There was no any reformist regulations adopted in other two areas. 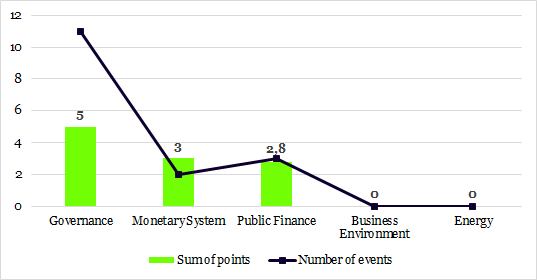 We have identified 11 important changes in this area. 8 of them were initiated by the parliament, another 2 — by the Cabinet of Ministers, anti-reform from the Constitutional Court got here too. Among the important reforms that were not mentioned above are:

✓a law that unified the approach to local government budgets regardless of the status of the settlement (iMoRe 146, +1.0 points). It transferred all new territorial communities (new united village, settlement and urban communities) to direct inter-budgetary relations with the state budget. From now on, village, settlement and city budgets will not depend on the decisions of districts, which before the unification of settlements into communities received a significant part of taxes and determined the directions of expenditures.

✓a law on the optimization of the network of administrative service centers (ASCs) (iMoRe 148, +1.0 points) should provide community residents with equal access to ASCs, as in some communities there are several Centers (established by the council and administration) operating, and in some there is none. The challenge for implementing this law is the lack of funding.

In the last three months of 2020, the government has approved two reforms in the field of monetary policy. The first one is the above-mentioned law on the regulation of microcredit. The second one is the NBU resolution on the implementation of the assessment of non-bank financial institutions on the level of risk and social importance (iMoRe 150, +1.0 points). According to the law on “split”, the NBU must regulate the activities of non-bank financial institutions (insurance, financial companies, credit unions, pawnshops, etc.). Following the adoption of Decree №157 of 11.12.2020, the NBU will pay more attention in supervision to companies that carry more risks for their customers. Instead, lower-risk companies will be much less likely to face inspections and other regulatory activities.

In the area of ​​Public Finance, experts have noted three significant changes in the “rules of the game.” Two of them are initiated by the parliament, another — by the president.

The biggest reform in this area was the law on the functioning of the State Agrarian Register and the improvement of state support for agricultural producers (iMoRe 149, +1.5 points). Farmers will fill in information about themselves in the register on their own. Instead, they will receive updates on existing state support programs and will be able to apply through the register for various permits and state support.

The other two regulations received lower scores: the return of the “baby package” (iMoRe 146) with the possibility of obtaining it in both material and monetary form “pulled” +1.0 points, and the law on state support of culture, tourism and creative industries (iMoRe 150), which reduces the tax burden on these areas got only +0.3 points.

In the fourth quarter, the main initiator of reforms traditionally became the Verkhovna Rada of Ukraine (11 reforms), and other authorities significantly lagged behind: on the account of the Cabinet of Ministers are 2 reforms, the President and the National Bank managed to initiate one important change per each, and the Constitutional Court provided the most powerful anti-reform in the history of the Index. This is already becoming a tradition, as the previous record anti-reform was also by the Constitutional Court. In 2019, the Court declared unconstitutional the article of the Criminal Code on illicit enrichment. Then experts estimated that decision at -3.0 points.

Figure 2. Initiators of reforms in the 4th quarter of 2020 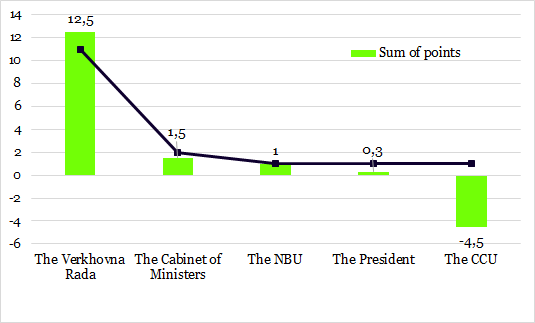 Authorities significantly worsened the results compared to the previous quarter:

Also, in the 4th quarter of 2020, for the first time in the history of observations, we recorded a negative value of the Reform Index. In the 146 issue, the index was -0.8 points. 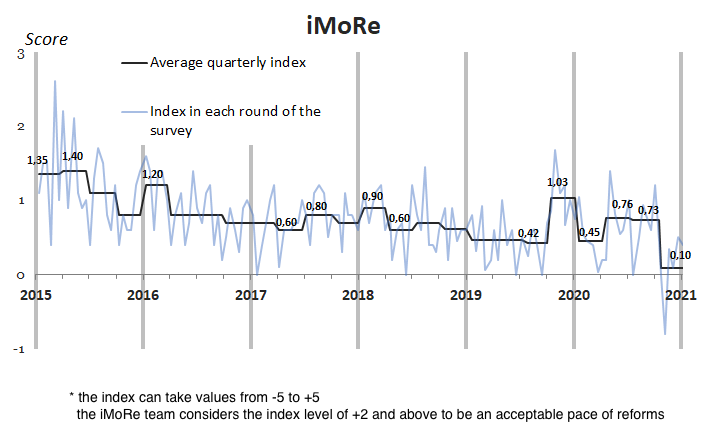