The Habit of Giving: Ukrainians’ Attitudes Toward Charity

The Habit of Giving: Ukrainians’ Attitudes Toward Charity

Charity has existed in Ukraine in various forms for a long time because the desire to help others is not alien to many of our fellow citizens. And it keeps evolving: people now become more and more willing to do good deeds since they understand that anyone can help.

Charity culture is gradually spreading in Ukraine, i.e. the habit of doing good deeds openly and regularly. According to the Charity Through the Eyes of Ukrainians 2021 study by Zagoriy Foundation, 67% of Ukrainians engage in charity, which is 7% more than in 2019.

What, then, are Ukrainians’ habits, thoughts and, at times, stereotypes when it comes to good deeds?

All data are taken from the Charity Through the Eyes of Ukrainians 2021 study, conducted in June-July 2021 by Socioinform, a Ukrainian center for sociological research, at the request of Zagoriy Foundation.

They help with money

Most Ukrainians believe that material help is the best help. People are most likely to help financially and less likely to donate things, food, and medicines. According to the study, young people prefer to donate money, while the older generation prefers to donate things. 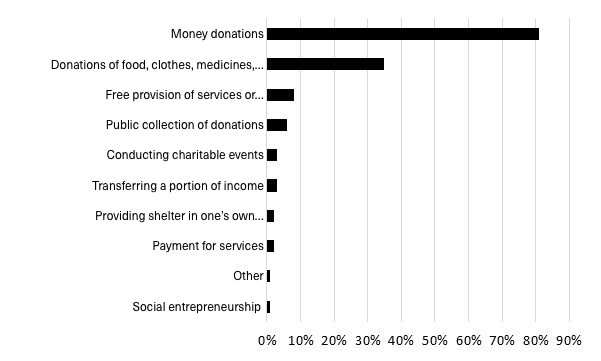 Young people are more likely to engage in charity

Young people also do good deeds more frequently. According to the study, the younger the respondent, the more it is likely that she/he was a giver in 2021. The proportion of donators among the respondents aged 18-29 is 76%. On the other hand, only 57% of the respondents are 60 years old or more. This may be due to the financial situation of the people in these age groups. After all, the study showed that the higher the respondents’ level of education and income, the more actively she/he engages in charity. Therefore, the largest number of donators (74%) is among those with higher education, compared with 53% among those having secondary education. There are 74% of donators among the employed and 59% among the unemployed.

They do good deeds anonymously

To this day, most donators believe that genuine charity should be anonymous. This opinion was expressed by every third respondent, grounding their positions mainly on biblical principles. However, some respondents have a diametrically opposite opinion believing that talking about their own good deeds helps increase the amount of aid from donators motivating everyone else to follow their positive example.

They are more likely to donate if it is convenient

In recent years, it has become easier to do good deeds. For instance, it is now possible to automatically transfer cashback from the payment card to charity. Such a variety of formats for donation and their convenience have contributed to the growth in the number of donators, especially among young people.

They have begun to help more frequently after COVID-19

The pandemic triggered the development of charitable work and volunteering in Ukraine. Many Ukrainians engaged in charity during this period. They supported financially their acquaintances who needed intensive treatment of the virus’s effects. COVID-19 also helped shift the focus of charitable aid: people began donating less to the military (30% in 2021 compared with 43% in 2019), life and health (from 54% to 37%), but more to healthcare (from 46% to 51%).

They provide and seek aid in social networks

They engage in charity more frequently and on a regular basis

Over the past 12 months, every second Ukrainian has donated to charity. This percentage has increased compared to 2019. At the same time, more than half of those involved in charitable activities over the past year engage in charity at least once every three months. How often Ukrainians engage in charity does not depend on their region of residence or gender.

Ukrainians often provide charitable assistance to those who need it, bypassing charitable foundations (trust in charity funds remains average). Compared to 2019, the popularity of aid transfers to a bank card has increased by 8%.

They are most likely to aid children, seriously ill people and military servicemen

In Ukraine, children, orphans and children’s home residents, seriously ill people and servicemen receive charitable assistance most frequently. Compared to 2019, the proportion of those aiding children has increased from 24% to 29%. There has, however, been a decrease in the proportion of those aiding orphans or orphanages (from 47% to 42%), military servicemen (from 30% to 23%) and displaced persons (from 39% to 13%).

They are not accustomed to donating for culture and science

Culture and science are unpopular areas of aid for Ukrainians. Respondents in the study said they heard little about aiding scientists, artists, cultural figures, and youth. Some of them believe that these groups do not require charitable assistance since they are capable of keeping themselves going.

They are guided by emotions

Ukrainians usually donate to charity out of compassion for those in need (64%). Then it is the realization that they might find themselves in trouble tomorrow (51%), although that, too, is a manifestation of empathy. In third place are the pleasure in giving to charity and the desire to change the world for the better (a total of 29% of respondents mentioned this motive).

People want to have a better understanding of how charitable foundations work and the benefits of working with them. Respondents believe that they should see the expenditure transparency, evidence of the efficient allocation of funds, more information about the beneficiaries and charitable campaigns’ results. 92% of Ukrainians do not rule out the possibility of engaging in charity and consider the creation of an atmosphere of trust between donators, charitable foundations and beneficiaries to be the main factor in ramping up charity activities in Ukraine.

So, we can conclude that a vogue for charity is taking shape today

Modern Ukrainians have begun to do good deeds more frequently, following opinion leaders and their environment. Society thinks charity is in vogue. Besides, young people consider it fashionable not only to donate to charity but also to talk about it, promote good deeds and spread charity culture.