The National Bank Of Ukraine And The Exchange Rate: A New Normal? | VoxUkraine

The National Bank Of Ukraine And The Exchange Rate: A New Normal?

The hryvnia demonstrates record appreciation. Many Ukrainians wonder what this means for the country and if it’s a new normal. In a highly unusual move, the Council of the National Bank of Ukraine (NBU) went to suggest that the leadership of the NBU made a mistake in keeping interest rates too high for too long, which allowed the hryvnia to get stronger and thus hurt Ukrainian exporters. The top officials of the NBU deny any wrongdoing and highlight the benefits of a stronger hryvnia such as lower prices of imported goods (including gas), lower inflation, lower interest rates, and a lower burden of public debt.

Who is right and what will happen with the hryvnia? Before we answer these questions, we should clear confusion about several things.

First, everybody should understand that the exchange rate is a price determined by supply and demand. The right price is where supply meets demand. We must rely on the market to determine the balance and so the price. The government should not define what the “right” price is.

Second, when a price moves, some people lose and some people gain. For example, if the price of milk falls, farmers lose but consumers gain. Using the same logic, one can argue that stronger hryvnia helps some agents (importers) and hurts other agents (exporters). Because of these distributional effects, the debate about “desirable” fluctuations in the exchange rate is inevitable. And this debate can get really complicated given the complexity of global value chains when firms can export and import at the same time.

Third, movements in the exchange rate are a part of how a central bank can influence the economy. If the NBU raises interest rates, it attracts foreign capital because investors earn a higher return in Ukraine. When capital flows into Ukraine, the hryvnia appreciates (there is now a stronger demand for the hryvnia) which makes Ukrainian exports less price competitive. This slows down economic activity and reduces inflationary pressures in Ukraine. In short, the mechanism is simple: the NBU raises interest rates, the hryvnia gets stronger, and inflation falls. Therefore, if the NBU is tasked with keeping inflation low, a stronger hryvnia is a natural consequence of the policy. If somebody demands both low inflation and a weak hryvnia, there is an inconsistency in these demands. These two elements cannot happen at the same time when a country has free capital mobility, a floating exchange rate, and an independent monetary policy, that is, in the regime approved by the NBU Council. 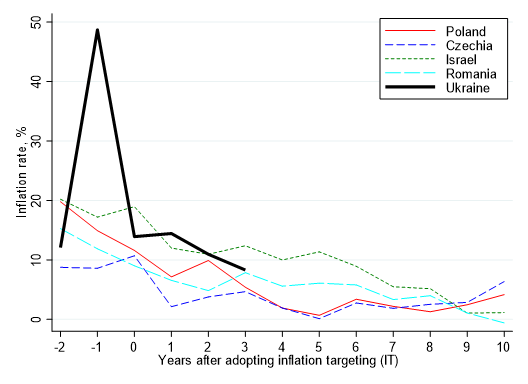 Figure 2. Dynamics of real exchange rate (national currency against a basket of currencies reflecting trade flows of a given country) 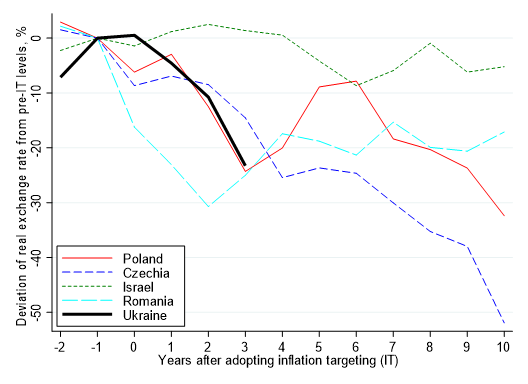 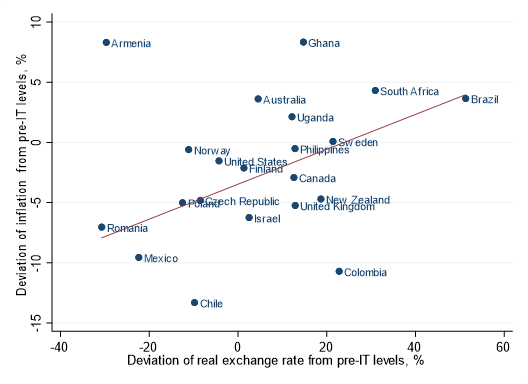 Why did real exchange rate appreciate for countries that successfully reduced inflation? Obviously, high interest rates set by central banks contributed to the observed appreciation. But it was also a reaction of the private sector: low and stable inflation supports a stable macroeconomic environment which is appealing to investors. Countries with inflation targeting attract more foreign direct investment. Because foreign capital inflows create a greater demand for a domestic currency, the private sector reinforces government policies and amplifies appreciation.

In summary, a stronger hryvnia is a sign of the NBU’s successful effort to reduce inflation. It is also a sign of financial markets’ confidence. Forecasting exchange rates is an impossible and ungrateful business but, given the historical experience, a strong hryvnia may be a new normal!