The recipe of successful reforms: What ingredient is missing in Ukraine

Сontrolling for different starting conditions and economic ties, the IMF sees the recipe for success in the four main “ingredients” 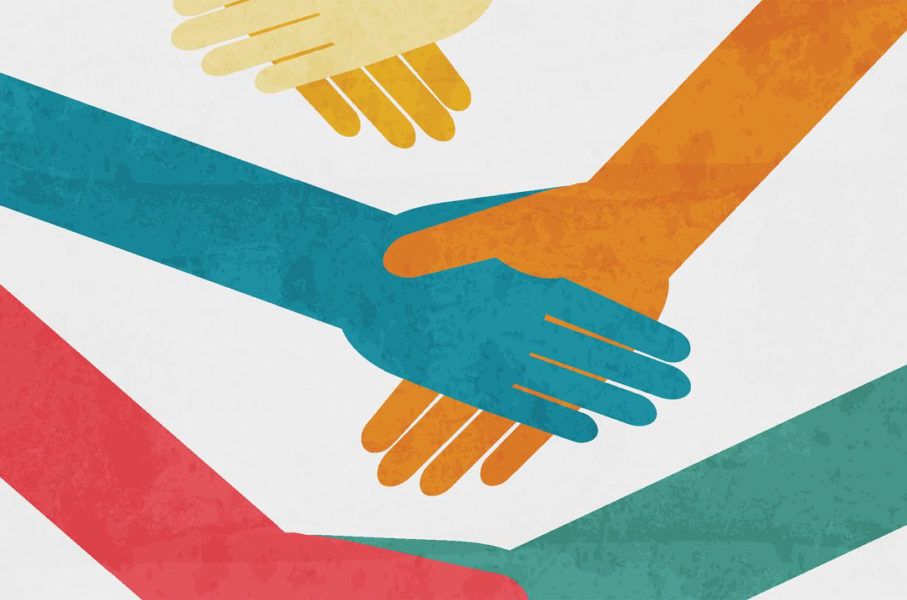 In October 2014, the IMF published the report “25 Years of Transition: Post-Communist Europe and the IMF.” The report studies reform progress in 21 countries including Ukraine, Russia, the countries of Central and Eastern Europe as well as the Baltic states. Some countries, such as Poland, the Czech Republic, Slovakia and the Baltic countries, achieved the great success in transforming and reforming their economy, mostly in the first 5-7 years after the abolition of the communist regime.

Others, including Ukraine, Russia and Belarus have hold the course of reformation, but have made only a few steps forward and are still lagging behind (see chart 1 below). The authors describe how the process of transition was going on in the European countries after the collapse of communism and try to identify the factors of success. 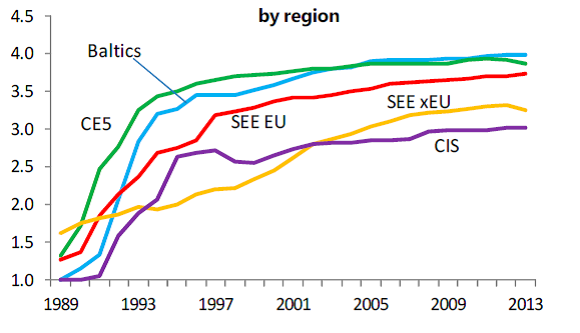 Each country has its specific characteristics and its development was affected by huge number of various. The starting positions were different. The countries of Central Europe and Yugoslavia started to introduce some market reforms already in the 1980s, while the countries of the former Soviet Union were making a transition to the new economic model after many years of rigid central planning. The economies of analyzed countries were in different conditions. In Poland, the budget deficit was at 7% of GDP in 1989, there was its own currency in daily use. In the USSR, the budget deficit reached 20% of GDP (1991) and after its collapse, each country encountered the problem associated with the absence of its own currency. External trade structure also had a strong influence. Countries of the Soviet Union and those who were actively trading with them suffered much more from its collapse than the states, whose export was oriented towards the Western Europe.

However, controlling for different starting conditions and economic ties, the IMF sees the recipe for success in the four main “ingredients”. I list them in the reverse order and provide assessment to current situation in Ukraine.

Fourth. External financial support. All 21 countries studied in the report had a working IMF bail-out program, which was often accompanied by the support of other donators. Ukraine experiences ho problem with this ingredient – the country enjoys unprecedented support of the West. The initial financial aid package from donor organizations and individual states in the amount of 27-30 billion dollars is most likely to be expanded. The IMF understands the complexity of the economic and political situation, and does not require the unconditional fulfillment of the original criteria of the program.

Third. Magnet Europe. After many years of communism ruling, citizens of post-communist countries were willing to live a normal life. This need was associated with the Western Europe. Something similar is going-on in Ukraine now. Several dark years of Yanukovych regime and Russia’s aggression have considerably improved the attitude of Ukrainians towards Europe. Social polls showed that 62% of Ukrainians were ready to vote for joining the EU if referendum was conducted in March 2014. Changes in people’s mind affected the political landscape. The majority of political parties that made their way into the Parliament at early elections on Oct. 26 can be fairly called pro-European.

Second. Smart strategies. In post-communism years, the majority of reform strategies were based on three key components: liberalization of prices, privatization and stabilization of public finances (meaning reduction of budget deficit and absence of its monetization through money printing). These measures sound trivial nowadays, but at that time a rare individual was aware of what needs to be done to quickly shift the economy from the central planning to the market-based principles. Do Ukrainian authorities have such a smart strategy? At this point only formally. “Strategy 2020” was presented by the Presidential Administration and offered for public discussion. Though being called a “strategy”, the document essentially comprises the list of targets and tasks for the next 5 years. It does not specify how the targets will be achieved, what will be done at first and what will be done next, who is responsible for the implementation (more detailed analysis is available here). At the same time, the absence of the smart strategies does not represent the major impediment. There is a great number of well-educated people in Ukraine with an experience or research interest in the relevant areas. This number is certainly bigger than in early 1990th. And with the right approach to accumulating these resources, a smart strategy can be compiled relatively quickly.

First (and foremost). Great people. Brave leaders, who had the courage to undertake the responsibility to implement “shock reformers therapy” and, not least important, to communicate the consequences of their actions to the population. They had hard times. Reforms were implemented in the environment of severe economic crisis and absence of understanding. Reform plan of Leszek Balcerowicz in Poland, which later on became a template for the other states, was initially questioned by many, including the IMF. However, persistence, dedication and radicalism of country leaders were a keystone of success, despite the absence of relevant experience. In early 1990th, Ukraine and Russia tried to follow Poland’s successful experience, but their leaders were not able to fight with the resistance, oligarchs and vested interests gained the upper hand. Lost opportunities of Ukraine’s Orange Revolutions are also well-known. Orange revolution failed for the same reason: inability of country leaders to withstand the pressures of vested interests and cronies. Ukraine’s present politicians, who are being carried away by coalition talks, have received another rare chance to enter the history as Great Reformers, along with Leszek Balcerowicz, Mikulas Dzurinda and others. But they also may easily become another Great Disappointment.