The Reform Index №166: Judicial Reform and the Digital Economy

The Reform Index №166: Judicial Reform and the Digital Economy 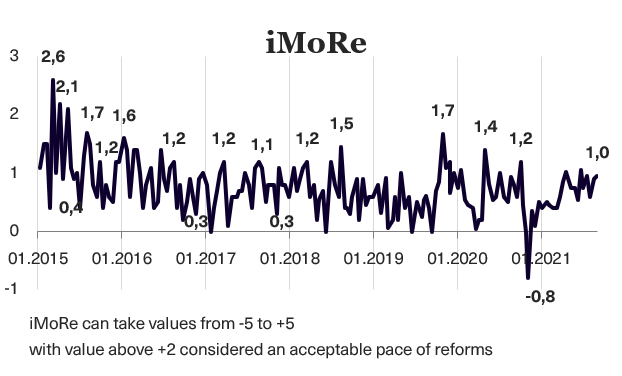 Law on the resumption of the work of the High Qualifications Commission of Judges, +2.0 points

The High Qualifications Commission of Judges of Ukraine (HQC) is a collegial body of judicial branch governance responsible for the selection and assessment of judicial candidates. After the HQC recommends judges for appointment, they should also be approved by the High Council of Justice.

This body has not been operating since 2019. The public had no trust in this body’s activities because it had repeatedly recommended corrupt judges for appointment. According to experts, one of the reasons for this problem was the principles of forming the HQC. Judges constituted two thirds of the Commission, but it turned out that they were not ready to provide an objective assessment and dismiss their colleagues. Specifically, the idea of cleaning up the judicial system failed to be implemented. Therefore, Parliament passed a law dissolving the HQC.

Law on the procedure for electing members of the High Council of Judges, +2.0 points

The High Council of Justice (HCJ) is responsible for appointing and dismissing judges, as well as for disciplining them for wrongdoing. This body plays a key role in the successful implementation of judicial reform. However, the current composition of the HCJ has failed in this task. Therefore, the question of “relaunching” this body arose.

Law 1635-IX of July 14, 2021, introduced a preliminary assessment of potential candidates to HCJ during the selection process and initiated a one-time assessment on whether the current members meet the criteria of professional ethics and integrity.

Law on strengthening the responsibilities of bank management bodies for decision-making, +2.0 points

Law 1587-IX of June 30, 2021, brought the legislation on corporate governance in banks closer to EU standards.

In particular, it requires that the bank founders and owners of substantial parti provide the NBU with all the documents available affirming that its good standing and financial condition are in line with the requirements of the law.

Besides, the law made some adjustments regarding the NBU Council by reducing its opportunities for interference in the work of the management board and increasing the salaries of its members. The law also introduced an additional position of NBU Board member – it will now be seven of them, not six.

The law improving the mechanisms for withdrawing banks from the market and satisfying creditors’ claims, +1.8 points

Practice has shown that bank executives can consciously make decisions harming the financial condition of banks for their own benefit. Particularly, they lend to individuals associated with the bank on non-market terms, buy “junk” securities, withdraw liquid assets from collateral for loans, etc. The current legislation calls for such individuals’ liability if they harm the bank’s financial condition. However, in many cases, compensation mechanisms do not make it possible to recover damages in practice.

Law 1588-IX of June 30, 2021, tries to tackle this issue. It allows the Deposit Guarantee Fund (DGF) to initiate proceedings in foreign and international courts to recover damages caused to the bank as a result of the nationalization or expropriation of bank property. The law provides grounds for compensation by individuals who caused damage to the bank or benefited from such action. The possibility of voluntary compensation for such damage is also provided.

The law also allows the DGF to apply to foreign and international courts in the event of requisitioning, destroying or devaluing bank assets due to hostilities and armed conflicts.

Law on the digital economy, +1.5 points

This legal regime provides special taxation, employment and regulation incentives for companies that are residents of Diia City.

The law stipulates that a Diia City resident company can hire employees based on so-called gig contracts. The law defines such employees as gig specialists. Unlike the agreements for the provision of services that companies normally conclude with their private entrepreneur employees, a gig contract can specify set working hours and the time off work.

To become a Diia City resident, the average monthly salary of company employees and gig specialists must be at least EUR 1,200, with their average number being at least 9 people.

The law also defines the list of agreements that can be concluded by Diia City residents:

It is expected that the next step in the implementation of the Diia City regime will be changes to the Tax Code.

Amendments to the law on the National Agency of Ukraine for Detection, Search and Management of Assets, +1.0 points

Reforms Index from VoxUkraine aims to provide a comprehensive assessment of reform efforts by Ukraine’s authorities. The Index is based on expert assessments of changes in the regulatory environment in five areas: