The Rise of Populism in Ukraine | VoxUkraine

The Rise of Populism in Ukraine

The true cause of the rise of populism in Ukraine is the failure of the new government to meet the hopes of the public and meaningfully confront the corrupt elites. The government has been shy on tackling difficult tasks of challenging vested interests and creating robust, healthy, and independent institutions. It has found easier to focus on reforms which impose a direct and immediate cost on the population while leaving many of the old non-productive rent-seeking networks untouched.

A year and a half after ousting President Yanukovich in Ukraine, political populism is on the rise. Yulia Tymoshenko, a former prime minister, who served the prison term under Yanukovich accused of signing an unfavorable gas contract with Russia, campaigns for lower energy tariffs and pension increases (see, for example, here). She leads a small faction in the Ukrainian parliament which is a member of “pro-Western, pro-reform” coalition. Oleh Lyashko, the leader of another member of the coalition `Radical Party’’ seconds Tymoshenko by demanding lower tariffs in the name of justice.

Populism (definition) – a political philosophy supporting the rights and power of the people in their struggle against the privileged elite. 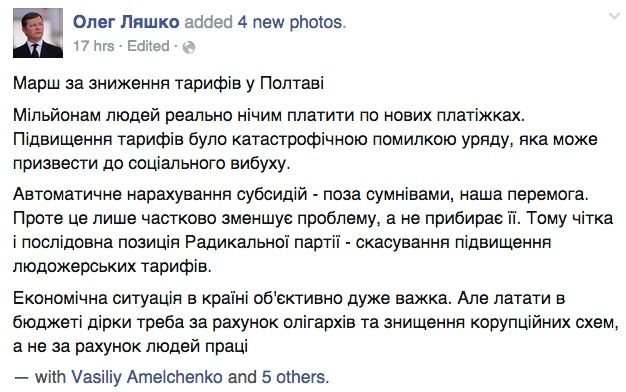 Justice and desire to make the government accountable is the rationale given by leader of “Samopomych Party” faction Oleh Berezyuk, another member of the coalition, in defence of a recently passed scandalous law 1558-1. This law requires that financial loans denominated in the foreign currency be repaid at the exchange rate on the date of signing the loan. Given devaluation of the Ukrainian currency, this law generates a windfall for the loans holders. This very law, by the way, was coauthored by the members of Narodnyi Front, a party of Prime Minister Yatsenyuk, and was put forward for vote by Speaker of the Parliament Volodymyr Groysman, a member of the presidential faction in the parliament. Both factions supported the law in scores, although the president and the prime minister strongly criticized the law.

The hikes in the tariffs and other unpopular measures, including pension fiscal discipline policies, are in accordance with the conditionalities of the IMF program. They are intended to bring macroeconomic stabilization. Abuse of lower tariffs have allegedly been the major source of political corruption and hidden budget deficit in Ukraine. In 2014, this deficit was monetized and contributed to massive devaluation of the Ukrainian currency. In March, the coalition members expressed strong support for these unpopular measures by voting laws that were required to secure the IMF funding. The other example of populism mentioned above –  law 1558-1 – is also against the spirit of fiscal discipline, and all branches of the government – the President, the National Bank of Ukraine, and the Ministry of Finance – have openly spoken against it.

It is a surreal, somewhat schizophrenic situation. The politicians and new public leaders, who campaigned on Maidan against the previous regime, came to power and passed a number of tough policy measures intended to stabilize the economy. These measures are uniformly applauded by economists, the foreign governments and international agencies, and a substantive part of the expert and activist community in Ukraine. Yet, some of the very same people who supported these measures less than half a year ago are now campaigning to reverse these policies.

Yet, Ukraine is a democracy and the politicians respond to the public demands. If politicians offer populist rhetoric and support populist laws, there is demand for such populism from the public.

This is a puzzle that needs to be explained. If the reforms are good, why are they so unpopular with the public? Perhaps, it is an issue of inadequate communication by the government to the public. If so, why doesn’t the government communicate better and why a substantive majority of politicians in the parliament, including the newcomers from the Maidan, exploit populist rhetoric instead of explaining the social value of the reforms.

Let’s start by getting one possible explanation out of the way:

Unlikely explanation: The costs of the reforms have to be borne out now, while the benefits are in the future and uncertain. The Ukrainian people are not willing to pay the costs.

I find this explanation implausible. Over the last year and a half, Ukrainians have demonstrated resilience and commitment to defend the country and the new government. The volunteer movement supporting the military has become a national idea. There is no populist pressure to compromise with Russia and the East of Ukraine. We do not see politicians arguing against the military draft or against increasing budget expenditure on defense.

Thus, we must explain why Ukrainians are willing to crowdfund the military, accept the draft, and volunteer to join the military in scores, while there is no popular support for the fiscal discipline measures.

In order to understand these reasons, it might be useful to touch upon what I see to be the fundamental cause of repeated Maidans in Ukraine:

There is a substantive part of the population which would like to be included in the political process. They want their voice to be heard. However, the existing political institutions, which centralize the power in the hands of the president, the prime minister, their trusted inner circle, and the heads of law enforcing agencies, restrict the political decision making to a limited club of political elites. There are high barriers to entry into this club, including for example lack of easy access to national TV or absence of clean party financing. Maidans, then, become an organic institution that renews and expands the political elites.

The incompetence and inability of the political elites to create more inclusive political institutions make them responsible for generating Maidan. Yet, these elites have accumulated a substantive portion of wealth of the country and continue to benefit from rent seeking. Justice, as understood by the public, requires that these elites carry the most of the burden of the crisis and stop abuse of the public funds.

This is not what the public sees. There is lack of justice. Maidan murders and abuse of force have not been investigated. The former corrupt political elites have not been prosecuted. In fact, many of them continue to enjoy sufficient influence and protection under the new government. The Constitutional amendment process is limited to a select group of politicians and experts, and thus lack legitimacy. The negotiations with the separatists and Russia are non-transparent. The government has not addressed the issue of abuse of the public funds by corrupt bureaucrats. The tariffs for the public are increased, but it is unclear whether there are any additional measures in fighting corruption in the energy sector and if there is any effort to increase Efficiency.

As a result, the public perceives itself to carry the main cost of reforms, while the cause for these costs is the incompetence, to put it mildly, of the past and the current political elites. The public suspects that higher tariffs and lower pensions will help stabilize the government budget deficit, but the public does not see that vested interests that feed off the budget have been challenged by the new government.

There is also lack of focus on the institution building. Law 1558-1 is the case in point. The issue is insolvency of a number of individuals who took loans from the banks. The government, the parliament, and the regulators have not offered a viable institution for restructuring of these loans. As a result, there is populist pressure to make the banks absorb the costs and the politicians respond by offering a blank legislation that de facto pardons the individuals who cannot pay the loans. This legislation undermines the already weak financial and property rights institutions, and generates infighting among the political elites, activists, and expert community.

The true cause of rise of populism in Ukraine is the failure of the new government to meet the hopes of the public and meaningfully confront the corrupt elites. The government has been shy on tackling difficult tasks of challenging vested interests and creating robust, healthy, and independent institutions. It has found easier to focus on reforms which impose direct and immediate cost on the population, while leaving many of the old non-productive rent seeking networks untouched. Now, the government and the new political elites have to pay the price in the form of public resistance to reforms, and consequent populism and political infighting.