In the week between July 7 and 13, russia’s already traditional narratives about “dangerous bio-laboratories” in Ukraine and russian “humanitarian aid” in the occupied territories spread online. In this period, new fake news stories also emerged. Examples include social network users claiming the WHO would “introduce a third gender,” and, in such a way, reduce the birth rate globally. Vaccinations against COVID-19, thought of as “biogenetic weapons” by anti-vaxxers, were also to blame for a decrease in the birth rate.

Disinformation: Experiments carried out on Ukrainian service members to assess their tolerance to dangerous infections

russia’s defense ministry once again frantically sought evidence of biological threats in Ukraine. On July 7, the agency released information about Ukrainian service members involved as volunteers in experiments to assess their tolerance to dangerous infections, including hepatitis A, fever with renal syndrome, West Nile fever, and cholera. High concentrations of antibiotics were detected in the soldiers’ blood, proving they were preparing to work in conditions of biological contamination. The defense ministry allegedly published documents and data from the UP-8 project (“Study of the spread of the Crimean-Congo hemorrhagic fever virus and hantaviruses in Ukraine”). The defense ministry also published the documentation, which supposedly proves experiments were carried out on members of the Ukrainian military.

A slide from the russian defense ministry’s presentation

Among four folders of  the published documents, only one has to do with the Defense Threat Reduction Agency (DTRA), mentioned in the context of experiments conducted on military service members (see the slide).

However, none of the documents published by the russian defense ministry says anything about experiments carried out on Ukrainian service members to assess disease tolerance.

The U.S. Defense Threat Reduction Agency’s report refers to the Cooperative Biological Engagement Program  (CBEP). Data is publicly available on the U.S. Department of Defense website. As part of the program, the U.S. helped partner countries across the globe to upgrade their biosurveillance capabilities, including detecting accidental biological releases and natural outbreaks that could become pandemics.

The official website of Ukraine’s State Service for Food Safety and Consumer Protection says the Program operated in Ukraine from 2015 to 2020. However,  the project did not center around experiments on Ukrainian service members.

The report published by russia’s defense ministry analyzes the structure of Ukraine’s human and animal health care systems, infrastructure, regulatory bodies and legislation, gaps in Ukraine’s biosecurity system, etc. It does not mention any experiments carried out under the program, let alone their results.

The russian occupiers regularly spread information about providing health care and medical equipment and opening hospitals and pharmacies in Ukraine’s occupied territories. russian media outlets have been disseminating these messages, trying to create a positive image of russia’s activities in Ukraine.

The occupiers have been “solving” the problems that arose precisely from russia’s invasion of these territories, resulting in lack of medicine, difficult access to medical care, and essential products. The medical infrastructure in Ukraine’s government-controlled parts also suffers damages due to constant rocket attacks. In late June, UN representatives said almost 16 million people in Ukraine needed humanitarian assistance because of the war: water, food, health services, or a roof over their heads.

As of the beginning of July, russian troops had damaged 817 health care facilities and 481 pharmacies, with another 122 hospitals and 43 pharmacies destroyed and impossible to restore. In addition, hostilities left 14 medical workers dead and 48 injured.

According to the MoH and local authorities, the situation regarding providing medication to people in the occupied territories is still critical. Moreover, there have been cases of russia stealing medicaments from Ukrainian hospitals to replace them with untested russia-made drugs. These medicines are of unknown quality and may do civilians more harm than good.

Since the beginning of the large-scale invasion, russia has never once agreed to open humanitarian corridors, in particular, to pass medicines to civilians. Ukrainian volunteers occasionally manage to deliver humanitarian aid, but they do so at their own peril as there are no completely safe routes. Because of the lack of guarantees, the occupiers can capture volunteers and take humanitarian aid from them.

Misinformation: WHO is going to introduce a “third gender”

Social networks spread information about the World Health Organization, intending to introduce a “third gender.” The WHO announced that “sex is not limited to male or female.” Some users see this as a conspiracy theory, saying that same-sex relationships are being propagated in the West to reduce the population. russian media outlets are outraged by the decision. 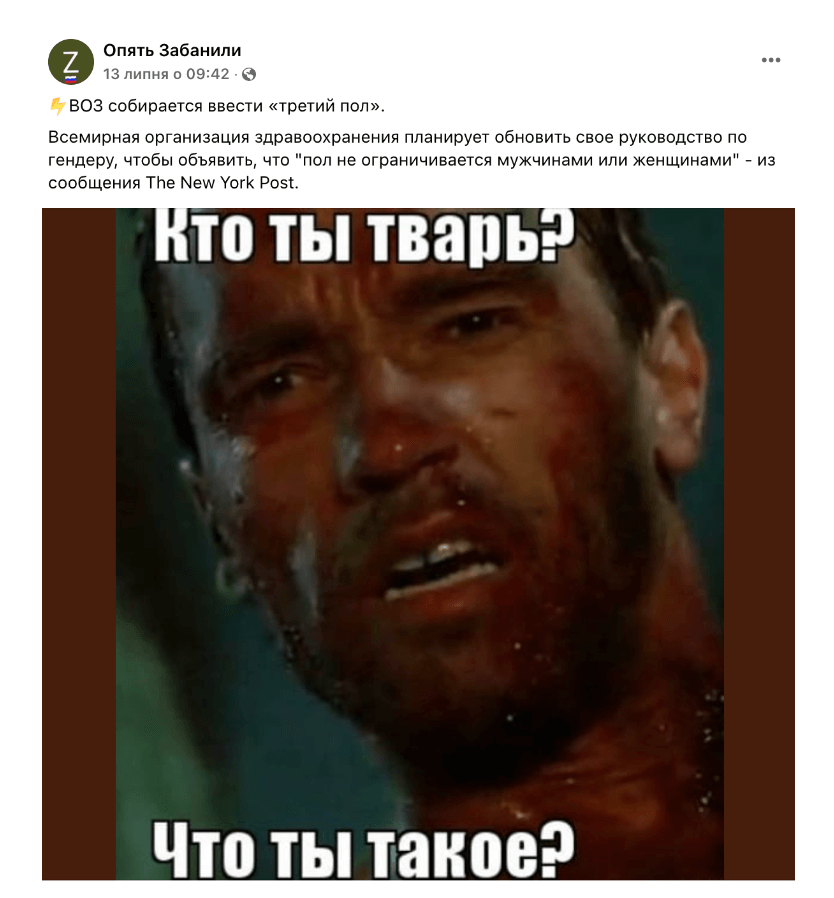 Translation: “The WHO is going to introduce a “third gender.”

The World Health Organization is set to update its guidance on gender to declare that “sex is not limited to male or female.” – as The New York Post reported.

Who are you, critter? What the hell are you?

On July 6, the WHO announced it would update its manual on gender. According to the WHO, gender inequity is a form of discrimination in the health care system. Gender mainstreaming for health managers: a practical approach aims to reduce gender-based inequities in this area. It is structured around a three-to-four-day workshop encouraging gender-responsive planning in health sector activities. 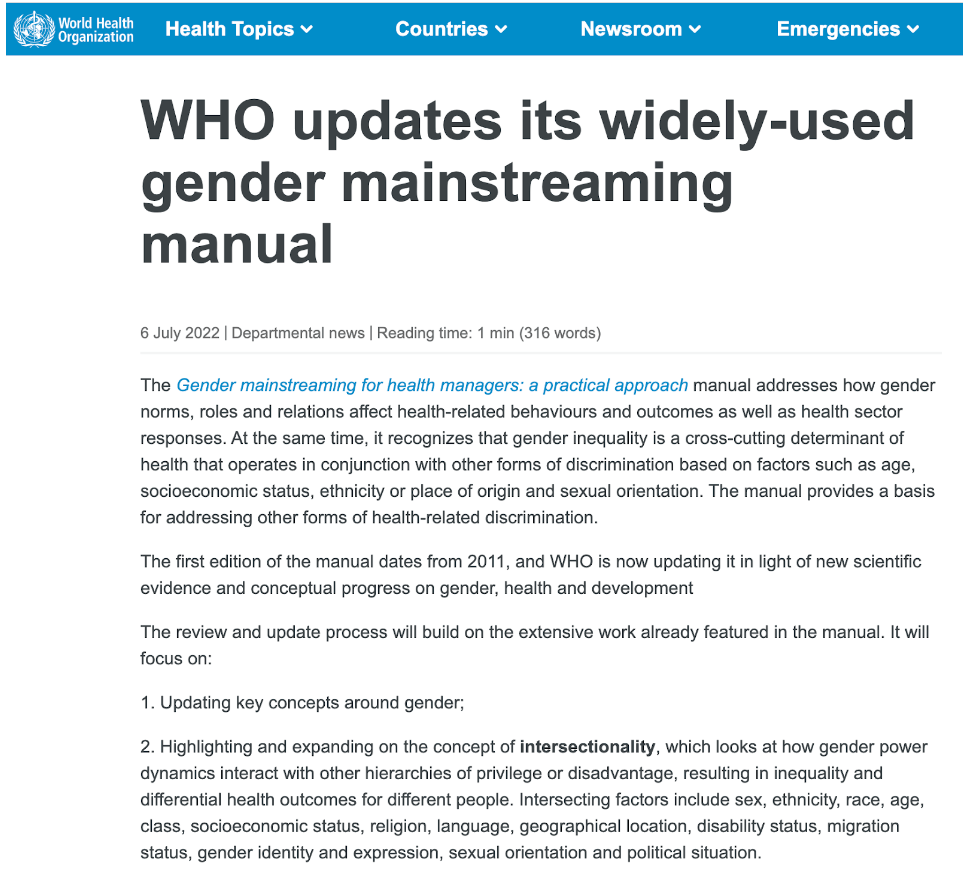 Publication on the WHO website: “WHO updates its widely-used gender mainstreaming manual.”

First published in 2011, the WHO wants to update the manual in light of new scientific evidence and conceptual advances on gender, health, and development.

The WHO does intend to “update key concepts around gender.” However, the organization did not specifically indicate they were set to introduce a “third gender.” They said they’d focus on “going beyond binary approaches to gender and health to recognize gender and sexual diversity” and on the concept that “gender identity exists on a continuum and that sex is not limited to male or female.”  The publication mentioned no “third gender” concept.

Sex and gender are distinct terms and should not be used interchangeably. Sex refers to a set of biological attributes in humans and animals, being mainly associated with physical and physiological features (chromosomes, gene expression, reproductive and sexual anatomy, etc.). Sex can be thought of as a biological characteristic and gender as a social construct.

Gender refers to socially constructed characteristics of women and men, such as roles and relationships between groups of women and men. For instance, gender can be expressed by how one dresses or behaves or by a person’s character. Individuals and groups not ‘conforming’ to established gender norms often face stigma and discriminatory practices and therefore may suffer adverse health effects.

It is also too early to talk about the WHO’s final conclusions. The organization has not yet published an updated manual version, and discussions about the new concepts are expected. Throughout the summer and fall of 2022, people will have an opportunity to provide their comments and feedback on the updates and participate in validation workshops and/or pilot programs.

The narrative of “same-sex relations propaganda” or intolerance to the concept of gender diversity is a traditional approach in russian disinformation campaigns, specifically aimed at domestic audiences. According to EUvsDisinfo project analysts, homophobic narratives are frequently presented to the russian audience in the wrapping of “Hahaganda,” a sort of insider joke about the promiscuous and “feminized” West. The examples are plentiful. Pro-Kremlin publications use homophobic techniques to mobilize russian voters (“Vote! Otherwise the gays will take your children.”). They suggested that gay couples could literally buy children at a fair in Brussels, claimed that same-sex marriage could be the cause of the Covid-19 pandemic, etc.

Disinformation: Vaccinations are a “biogenetic weapon” to reduce birth rates

Social networks once again spread disinformation about vaccinations against COVID-19. Anti-vaxxers put forth several ideas at once:

The birth rate in Hungary did indeed fall at the year’s beginning: 7,354 babies were born in January 2021, and 6,632 in January 2022 (9.8% less). Experts, whose opinions were cited by the Hungarian publication Népszava, suggested the decline might be related to the difficult economic situation and the government’s family support policy.

If you compare the pre-pandemic year 2019 with 2022, you will see that the birth rate was higher in two months of 2022 (March and May) than in 2019. I.e., the statistics show no correlation between the vaccination campaign and birth rates.

In recent decades, the trends of slowing population growth and declining birth rates have been fairly constant for developed countries, particularly Hungary. The country’s annual number of newborns is gradually decreasing. With the number of newborns nearly always exceeding 100,000 in the 1970-90s, the figure fluctuated between 88,000 and 99,000 in the 2000-2010s. The fertility rate (children per woman) in Hungary is also decreasing. 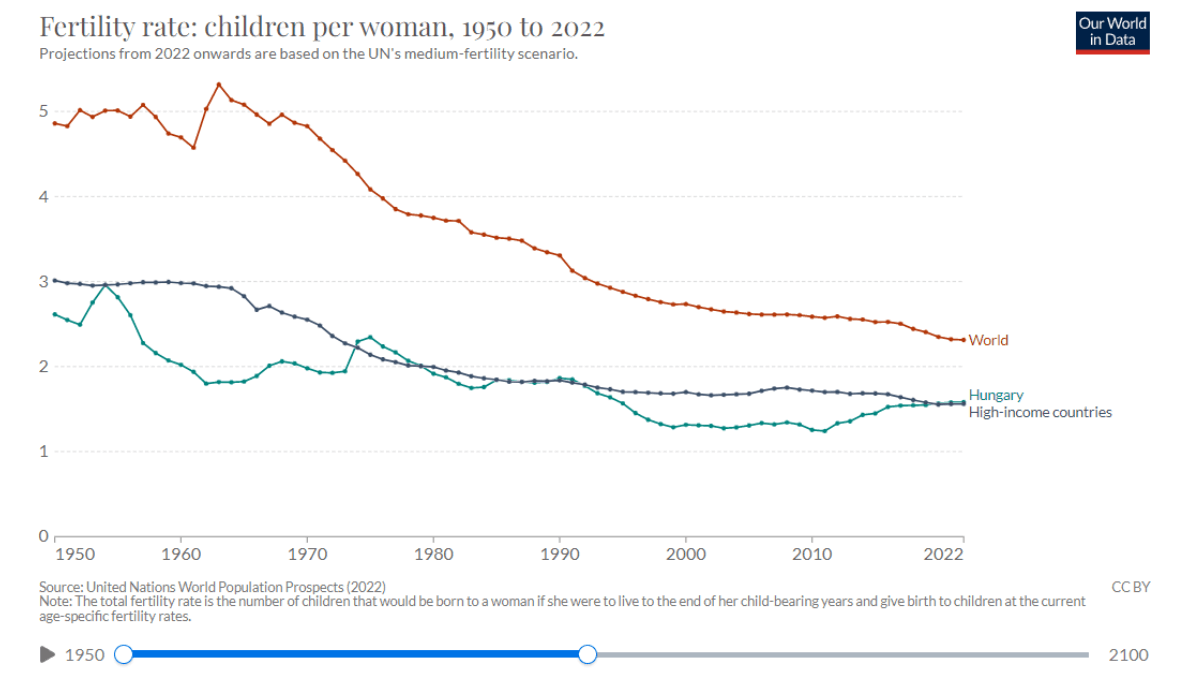 Fertility rates in the world and Hungary. Source: Our World in Data

The global trend is due to several factors: women’s empowerment resulting in more and more women having the opportunity to study and work; lower child mortality; increased child-raising costs, with parents planning to have fewer children.

Vaccines against COVID-19 do not affect pregnancy, lead to infertility, or alter human genetics. Health care organizations from across the globe recommend that pregnant and lactating women be vaccinated against Covid-19. Scientists have found no adverse impact of vaccinations on the reproductive health of men, women, or their children. However, the harm from COVID-19 is well known: pregnant women or those recently pregnant are at risk and more likely to suffer complications if they contract the disease.

Neither the Club of Rome nor the U.N. will force the world’s countries to reduce the birth rate. Yet international organizations warn that our planet’s resources are limited. So the further development of society must keep in mind the need to create quality living conditions for everyone and preserve the environment.