Train “Ukraine – Future”: In Which Direction Did the Country Move in the Second Quarter of 2017? | VoxUkraine

Train “Ukraine – Future”: In Which Direction Did the Country Move in the Second Quarter of 2017?

In the second quarter of 2017, the reforms continued to slow down, while the average Index for Monitoring of Reforms (iMoRe) was the lowest for the entire monitoring period since early 2015 (+0.6 points). The greatest progress was observed in the areas of “deregulation,” “fighting corruption,” and “efficiency of public expenditures.” Among the important regulatory acts of this quarter are the laws on the electricity market, compulsory redemption and sale of shares, and the autonomization of healthcare establishments.

More than two and a half years ago, the coalition of deputy factions “European Ukraine” made an agreement, having committed itself to reforming the country. In a month and a half, the President formally set the priorities of the reforms in the Ukraine 2020 strategy. The directions of reforms are also defined in the documents signed with the international partners – the IMF (1, 2, 3, 4), the EU (1, 2, 3), and the World Bank (1, 2).

How are the reforms progressing and which aspects have shown improvements recently? VoxUkraine starts to publishing quarterly reviews of the reforms. This publication focuses on the key legislative changes made by the government in the second quarter of 2017.

The rate of reformist legislative changes has been slowing down recently (graph 1). In the second quarter of 2017, the average Іndex for Monitoring of Reforms (iMoRe) was the lowest for the entire monitoring period since early 2015 (+0.6 points). 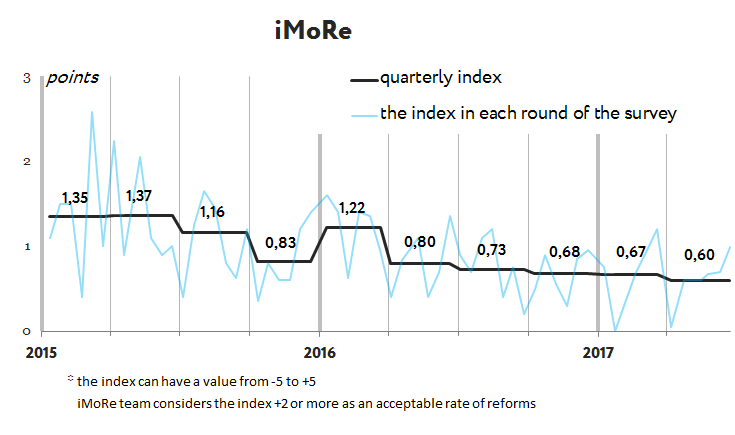 The greatest progress in the second quarter of 2017 was observed in the area of “deregulation”: the total iMoRe index in this area is twice higher than in the spheres ranking second and third – “fighting corruption” and “efficiency of public expenditures” respectively (graph 2). 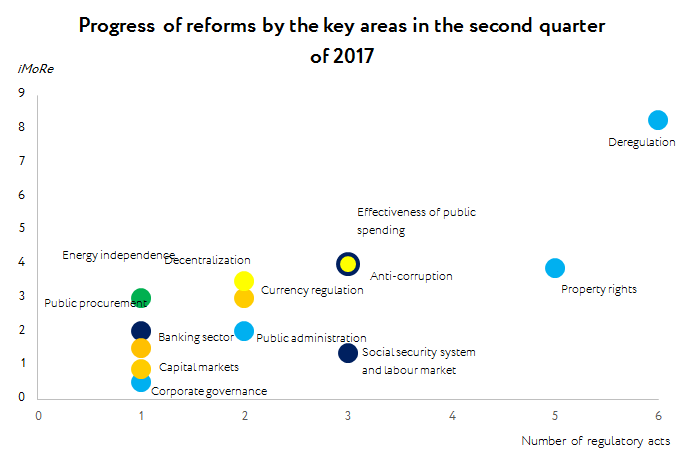 Major reformist regulatory acts in the second quarter of 2017

The document determines a new market model. It should create opportunities for the development of competition and, as a result, for the free choice of electricity suppliers by final consumers.

“Adoption of this law has marked the end of the first wave of implementation of the Third Energy Package of the EU at the level of basic laws,” says Roman Nitsovych, Dixi Group. “From a technical point of view, this law is of high quality, because experts from the EU structures and the Secretariat of the Energy Community have taken part in its development. The fundamental philosophy of the law is to launch liberalization of wholesale and retail electricity markets, which should result in the transition to market pricing rules, the protection of consumer rights, and the creation of conditions for the competition in the sphere of electricity supply.”

Natalia Boyko, Deputy Minister of Energy and Coal Industry, said that the law provides for the “transitional” period (24 months from the date of entry into force). During this period, the necessary technical, organizational, economic and regulatory prerequisites for the introduction and smooth operation of the market must be created. Over this period, the Ministry of Energy and the National Commission for Energy and Utilities Regulation shall prepare more than 100 subordinate legislative acts.

MP Viktoria Ptashnyk explained that the law is part of the corporate management reform (along with the law on corporate contracts which was already adopted and the draft law on limited liability companies). It lays down a basis for civilized relations in joint-stock companies.

According to Maksym Libanov from the National Securities and Stock Market Commission, the law has introduced a number of corporate management mechanisms. In particular:

A squeeze-out mechanism allows to redeem shares from those shareholders who do not have any influence on the company’s activities, yet, nevertheless, the company incurs significant expenses to inform these shareholders about the general meetings, payment of dividends, etc, said Denys Sakva from Dragon Capital.

“The law contains three blocks of changes important for businesses – introduction of escrow accounts, changes in the procedure for pledging money in bank accounts, and the redemption of shares of minority shareholders,” says Zoya Mylovanova, VoxUkraine Law. “Thus, the legislator has removed one of the obstacles that, along with currency risks, restrictions on the withdrawal of capital, and others, forced even bona fide owners willing to pay taxes to formalize the sale of large businesses outside Ukraine.”

The law allows to reorganize healthcare establishments from budgetary institutions into non-profit enterprises. Such opportunities have existed before, but the procedures were too complicated. The adopted law simplifies the reorganization and introduces new mechanisms of managing such enterprises.

“According to the law, healthcare establishments shall become similar in status to any other enterprise,” explains Pavlo Kovtoniuk, Deputy Minister of Healthcare. “So far, due to vertical management they have been functioning as budgetary institutions in line with the Soviet standards.” Their managers had no freedom of action and were guided by the top-down instructions in the form of orders and decrees.

The law introduces a concept of a “healthcare service” which allows to receive funds from any source of financing in a legitimate and transparent manner, to select the heads of healthcare establishments through competition, and to set up supervisory boards and boards of trustees.

The autonomization of healthcare establishments has been made voluntary – as a compromise at the request of the specialized committee of the Verkhovna Rada.

“Those healthcare establishments that decide to become non-profit enterprises will receive preferential terms for reorganization. Mandatory assessment of property which is usually required in case of reorganization will no longer be necessary. These enterprises will become successors to all the rights and obligations of the relevant budgetary institutions,” said MP Iryna Sysoyenko.

“A new form of management opens up many opportunities for a healthcare establishment,” says Yaroslav Kudlatskyi, Kyiv School of Economics, “from changing the organizational structure to attracting new sources of funding other than governmental funds. The hospitals will finally be able to decide independently which services or equipment to order. This should make provision of medical care more economically efficient and improve the quality of services.”

A number of draft laws are yet to be signed by the President. Once they are signed, it might influence the iMoRe dynamics in the third quarter of 2017.

Further progress will greatly depend on the parliament’s ability to shape the necessary legislative preconditions for the reforms in the spheres of healthcare, the pension system, the land market, privatization, and the reboot of the civil service. Given the fact that the last plenary meeting of the current (sixth) session will be held on July 14 and the next one will take place in September after the vacations, it will not be easy to find the necessary time and adopt the laws important for these reforms during the third quarter.