In Ukraine, there is a very bad tradition of usage of the NBU as a purse of the government, both for direct financing of the budget and indirect help to state companies. In the latter case, it is often not disclosed how the figures to be compensated by the central bank were calculated and how the company will repay to the NBU, if ever.

The prevailing scheme for the last several years is that a state company increases its capital, the state issues public debt to cover this increase and the NBU purchases this public debt from the company, monetizing it. 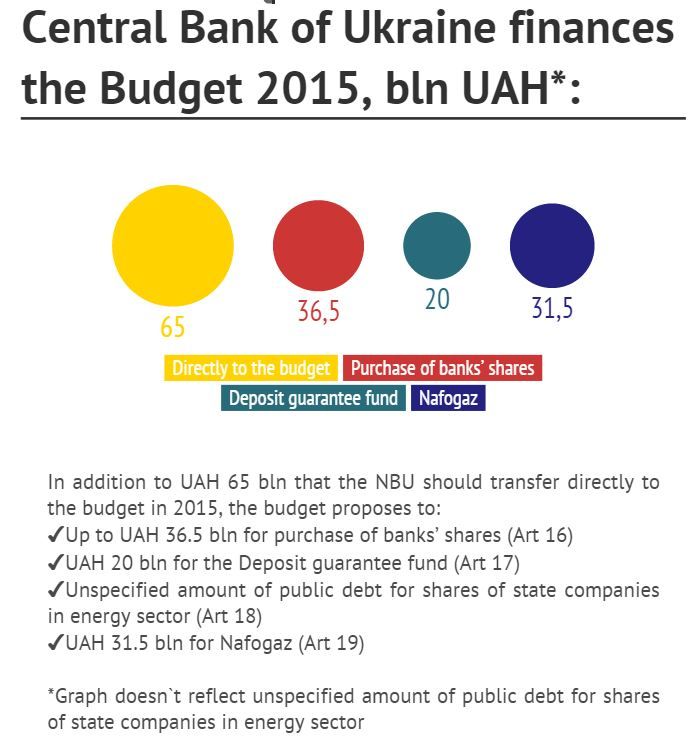 It is possible that during recession the government should actively step in to help potentially profitable enterprises in their temporary problems. Similar activist policies were used by developed nations during the crises, including the Great Recession of 2007-2009.

However, such support is clearly done with a cost for a society, which uses money supplied by the central bank, in terms of high inflation and depreciation of currency. Moreover, sometimes the recipients of the support are in chronic deficits and thus are a permanent rather than temporary burden on the budget.

Therefore, funds should be given only if the alternative is more costly for the society. In order to find out whether it is the case, the public should get access to the detailed accounts of the enterprises to be saved.

In the recently approved budget for 2015 there are a list of activities that will be financed by purchase of public debt by the NBU, thus, it can be said, by monetary emission. Such imposed activity on the central bank severely limits its ability to pursue its main goal, namely internal and external stability of hryvnia.

In addition to UAH 65 bn that the NBU should transfer directly to the budget in 2015, the budget proposes to:

For example, purchase of the bank shares possibly will boost the capital of state banks. At the same time, these banks are often pressed by the Cabinet to supply loans not on the basis of economic factors, but political ones or even as a case of crony capitalism, where oligarchs close to the power get preferential treatment.

On December 3, 2014 the Cabinet issued the Order № 1186-r On measures for stabilization of the public company “Odesa Port Plant”. The order directs state owned bank Oshchadbank to lend UAH 5 bn to the company, so that it will be able to purchase gas from Naftogaz. It is not clear whether the quality of the collateral is enough to cover the loan, because the initial sale of 5% shares of the plant have initial price of mere UAH 39 mn, giving its total starting price of UAH 780 mn. Most likely the market price is much higher, previously it was estimated that privatization of the plant can give up to USD 1 bn. Nevertheless, saving state company by a loan from state banks, which it turn will get funds from the NBU is questionable to say the least.

Another example is Naftogaz, which even now haven’t made public its balances for several year or supplied a clear information on what level of input and output gas prices it should have to be sustainable.

I think that a set of rules should be introduced to limit the practice of forcing the NBU to purchase public debt: