Ukraine’s improving economic situation creates a feeling of no urgency in further IMF financing. This view is not justified if one looks at the three-year horizon. Ukraine faces $14bn of external debt payments over the next three years, with half of them in 2019 – a year of presidential and parliamentary elections. Foreign currency reserves that the country has accumulated have to be built up further, rather than spent. Otherwise, Ukraine’s economy may appear on the brink of another economic crisis right before the election year, which may have a dramatic effect on the country’s development trajectory post-2019.

Ukraine’s macroeconomic situation has stabilized since mid-2015 and initial signs of economic recovery are emerging. Real GDP advanced by 1.4% year-on-year in the second quarter of 2016 and further by 2.0% year-on-year in the third quarter of 2016. Seasonally adjusted data point to gradual improvements in economic activity. Inflation came down to low double-digits from the 61% peak in April 2015 on the back of exchange rate stabilization. Confidence in the banking sector started to recover with local currency deposits rising 14% since mid-2015. Both fiscal and current account deficits narrowed sharply and central bank reserves grew almost threefold from the lowest point in February 2015 to $15.3bn in November 2016, now covering 3.7 months of imports.

This macroeconomic stabilization was to a large part attributable to sizable financing from official creditors. Through 2014-2016 Ukraine received $17bn of financing from official creditors (see table below) – a notable amount for an economy generating around $90bn of GDP per year. This financing was the key reason for the abovementioned three-fold increase in central bank reserves. Without IMF loans, net reserves of the National Bank of Ukraine (NBU) accounted to only $3.6bn as of end-November. Cheap loans from official creditors helped to boost confidence and contributed to macroeconomic stabilization without putting too much burden on the state budget. Importantly, the financing was provided in exchange for unpopular, but necessary structural reforms.

With the economy doing better, the willingness of Ukraine’s authorities to continue cooperation with the International Monetary Fund (IMF) seems to be fading. The country received only one IMF tranche in September 2016 for $1.0bn, out of four initially scheduled for 2016 for the total amount of $2.5bn. The government’s general rhetoric remains that the IMF program will stay on track, but there has been little progress in fulfilling obligations under the program, including in areas fully under control of on the government. Out of eight structural benchmarks set for November 2016 only one was met (filing of electronic assets and income declarations by Ukraine’s high-rank officials, which was also one of the conditions for visa free regime with the EU). Progress in other areas was dismal.

There is a general feeling that there is no urgency to obtain IMF financing. On Nov. 21, Finance Minister Oleksandr Danylyuk said that the country would survive if the next $1.3bn tranche from the IMF does not arrive immediately. Such view is justified, only if one looks at the short-term horizon of several months. Indeed, the government and the National Bank of Ukraine have built some reserves and face no major external debt repayments in the next six months. But the outlook is much less rosy, if one looks at a longer horizon of several years.

Ukraine’s external debt service will start growing after mid-2017. Sovereign and quasi-sovereign external debt repayment due in the next three years amount to $14bn, almost matching the central bank’s current foreign reserves. The bulk of this amount, or $11bn, is due from the state budget, while the government has much smaller F/X liquidity than the central bank – estimated $1.5bn by end-October.

Importantly, external debt service payment will peak at $7.5bn in 2019 – the year of two elections, Presidential in March and Parliamentary in October. It will be more difficult for Ukraine’s administration to raise external financing during the peak of the election cycle. 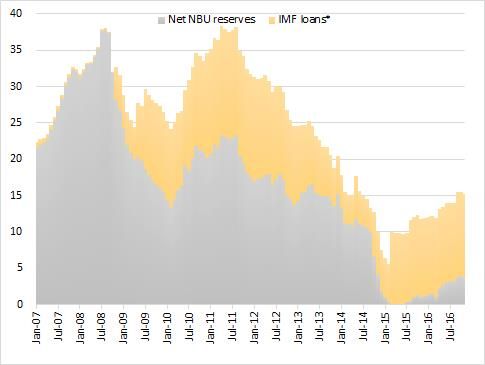 The existing F/X reserves should be built up further, rather than spent. Domestic sources of F/X funding will not be sufficient to bridge the gap. The major source of domestic funding is banking system’s dollar liquidity, which currently amounts to $5.5bn, far less than $11bn needed by the government over the next three years. Ukraine needs to raise money externally and concentrate on cheap financing, as its debt indicators are already in the red — public debt amounts to 80% of GDP and interest payments amount to 4.5% of GDP.

Access to external funding hinges on Ukraine’s cooperation with the IMF. Cooperation with the IMF means the continuation of reforms needed for the country. This is Ukraine, that needs strong anti-corruption institutions, a healthy pension system, an efficient land market and a sound banking system. Reforms undertaken under the IMF program provide a signal to foreign investors that the country is moving in the right direction, its economic policies are prudent and it makes sense to invest into this country. Thus, a successful implementation of the IMF program is a key prerequisite to get financing from other official creditors as well as to reduce the cost of borrowings from private credit markets. Ukraine’s Eurobond currently trade at close to 9.0% yield – one of the highest yields among emerging markets. The only way for the country to reduce the costs of private market borrowing, especially in the environment of potentially increasing global interest rates, is to reduce the country’s risk premium. Speeding up reforms is the best way to achieve it. 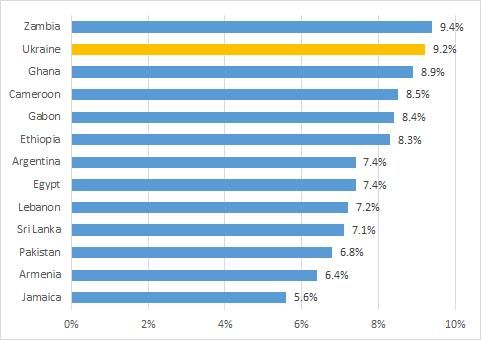 An alternative “muddling through” approach  might be disastrous for the economy and even for country’s future development. As it will be more and more difficult to implement reforms and raise external financing closer to 2019 elections, central bank reserves will turn on a downward trend, undermining confidence, creating pressures on the currency and stalling the economic recovery. The country may well appear on the brink of another economic crisis right before the elections. This will create a perfect opportunity for internal reactionary forces and Ukraine’s external enemies to take a revanche, dramatically affecting Ukraine’s development trajectory post-2019.