Ukraine is not Greece. Pros and Cons of the IMF Bailout of Ukraine

On March 11, 2015 the IMF Executive Board approved a four-year Extended Arrangement under the Extended Fund Facility (EFF) of about $17.5 billion for Ukraine 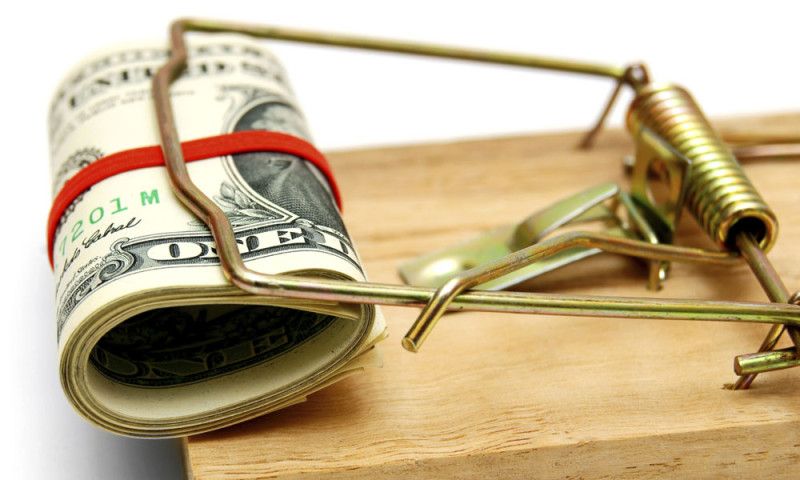 Viktoria Hnatkovska
associate professor at the University of British Columbia

On March 11, 2015 the IMF Executive Board approved a four-year Extended Arrangement under the Extended Fund Facility (EFF) of about $17.5 billion for Ukraine. The success of the program will depend on the Ukraine’s government long-term commitment to reforms. A good example of how participation in IMF programs coupled with government commitment to reforms can lead to economic revival is provided by India’s experience in the 1990s. In 1991 India went through a balance of payment crisis, where foreign reserves of the country dwindled to two weeks imports, currency values collapsed, and the government was on the verge of defaulting. Participation in the IMF program and a series of structural reforms followed sparking India’s annual GDP growth rate to an average of 6% since then.

On March 11, 2015 the IMF Executive Board approved a four-year Extended Arrangement under the Extended Fund Facility (EFF) of about $17.5 billion for Ukraine. Majority of analysts welcome the move, noting that it helps Ukraine to avoid immediate financial meltdown. Some, however, point out that IMF conditions might be too harsh and counter-productive.  The Ukrainian public’s views are mixed, too.

The arguments in favor of cooperation with the IMF are as follows.

The anti-IMF public sentiment rests on the following arguments.

We argue that the benefits of Ukraine’s participation in the IMF program outweigh the costs. The adjustments prescribed by the IMF will be painful, but they are necessary to put Ukraine on the path of economic recovery. Two factors will soften the pain:

At the same time we emphasize that participation in the IMF program by itself is not enough to turn things around. The IMF program provides a nudge in the right direction and a way for the government to temporarily commit to reforms. The success of the program, however, will depend on the Ukraine’s government long-term commitment to reforms and its ability to convince the public and investors of such commitment.

The IMF program is front-loaded with $10 billion to be disbursed within 2015 ($5 billion were received by Ukraine on March 13). The rest of the funds will come over the remainder of the program, subject to the successful implementation of the program. T. The important part here is that even the next tranche of $5 billion later this year is not guaranteed, unless the IMF will find the Ukrainian government in compliance. Thus, the IMF will continue to exert pressure on the Ukrainian government to reform the economy by holding the right to withdraw future support.

What does the IMF want? There are two groups of demands:

So far so good. The problem – the emergency adjustment policies are going to be painful for the public. Yet, they are needed if Ukraine is to avert even deeper economic crisis. This pain for the public is plausibly the reason why the Ukrainian leadership has been sluggish with undertaking structural changes and seems incapable of bold moves without external pressure from the IMF.

On the monetary policy side, the objective is to stabilize the exchange rate and curb inflation. The prescribed policies are non-controversial and are likely to have the desired consequences if implemented properly and in a timely fashion. Specifically,

On the fiscal policy side, the IMF program prescribes fiscal restraint, with the adjustments mainly coming from a reduction in expenditures, and only minor increases in taxes.

There is no question that fiscal restraint is painful. There is also widespread consensus that reducing debt has important long-term benefits.

But what are its effects on economic activity in the short-run? One school of thought – the conventional Keynesian wisdom – argues that reducing government spending or increasing taxes will lead to economic contraction in the short-term.

An alternative view is that a fiscal restraint can prop up economic activity even in the short-run. There are several channels through which this can occur.

There is some empirical evidence in support of the non-Keynesian view. A recent IMF study (WEO 2010) finds that fiscal consolidations tend to be “contractionary” but the negative effects are cushioned when accompanied by lower interest rates; a decline (depreciation) in the real value of domestic currency; and when consolidations rely on spending cuts, rather than tax increases. Among the different categories of spending cuts, cuts to government transfers tend to have least contractionary effects, followed by cuts to government consumption, and government investment. Moreover, the contractionary effects tend to be smaller in countries that have high preceding risk of default.

Figure 1 provides some evidence in support of this by plotting the impact on GDP of a 1 percent fiscal consolidation as a share of GDP for different countries. Denmark (1983) and Ireland (1987) experienced sharp deteriorations in their sovereign debt ratings due to large fiscal deficits and rapid debt accumulation. They undertook sharp fiscal consolidations of around 3% of GDP to correct the situation. The figure shows that these fiscal adjustments had “expansionary” consequences. It also shows that countries whose perceived sovereign default risk was high experienced a much smaller fall in GDP relative to countries with a low perceived default risk.

Figure 1. Estimated impact on GDP of a 1% of GDP fiscal consolidation 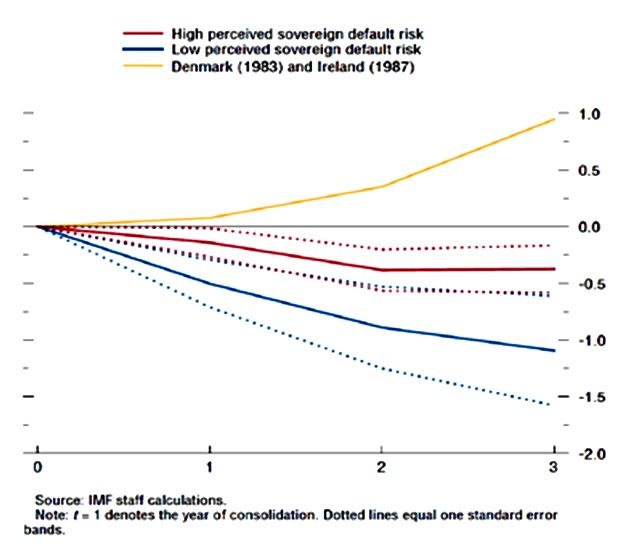 Can Ukraine repeat the experience of Denmark and Ireland?  It certainly satisfies the preconditions discussed above. Ukraine’s interest rates are expected to decline as fears of default subside; the real exchange rate is expected to depreciate by another 17 percent in 2015; and the majority of fiscal consolidation will be accomplished by lowering the social transfers components of government expenditures. A lot will however depend on the government’s commitment to reforms and investor’s perception of this commitment.

Existing studies have used different methodologies to account for these problems. Earlier work has shown that the negative correlation between IMF program participation and economic growth survives even after controlling for selection (Przeworski and Vreeland, 2000), but greater compliance with the conditionality tends to weaken this effect. More recent studies (Bas and Stone, 2014) have shown that on average countries benefit from participation in the IMF program.

A good example of how participation in IMF programs coupled with government commitment to reforms can lead to economic revival is provided by India’s experience in the 1990s. In 1991 India went through a balance of payment crisis, where foreign reserves of the country dwindled to two weeks imports, currency values collapsed, and the government was on the verge of defaulting. The government turned for help to the IMF securing a loan on the condition of participating in the IMF program. A series of structural reforms followed sparking India’s annual GDP growth rate to an average of 6% since then.

To conclude, the success of the IMF program in Ukraine depends on Ukraine itself. The participation in the IMF program provides a push in the right direction and a temporary commitment device. While the required adjustments will be painful, there is a number of pre-conditions that will soften the pain. The key to success however is government’s commitment to implementing very needed though unpopular policies right now, and a deep structural reform of the economy in the nearest future.